My only tradition for New Year's Day – really, my only firm holiday tradition, period – is starting the new year on the back of a horse. Preferably not just sitting on a horse but going for a ride on my horse, but there have been years that all I could do was sit on my horse in the barn due to weather, or ride someone else's horse. Still, that's better than those few times in the last 40+ years when circumstances preventing me from being astride at all.
Today's weather forecast indicated a dry window in the morning, followed by a sustained soggy spell – as in days of rain. How fortuitous! I saddled up the reliably rideable one first. While Lance and I warmed up in the arena, I shot a little video to share on Instagram/FB,
then we walked down the lane and back. 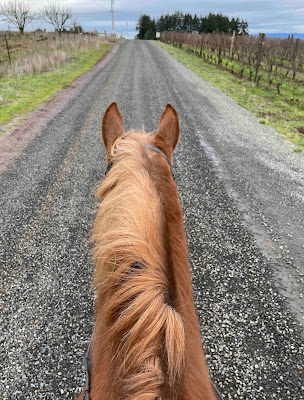 Next I turned Stella out to stretch her legs, followed by some in-hand work. Since I am ever working on her reactivity, I did half-circles and circles with her while holding the flag, touching her with the flag, and then adding in a new and alarming piece. slipping the flag up under her tail. Down clamped the tail and forward scooted the mare – at first. But slowly and cautiously she accepted this invasion to the point that she kept walking, for which she was praised and rewarded. Then I climbed the arena fence to do half-circles, pet her, and sit on her. It would have been nice to actually ride her around the arena a bit, but she was quite lively when doing the half-circles so that would have been asking for a confidence-ruining wreck. 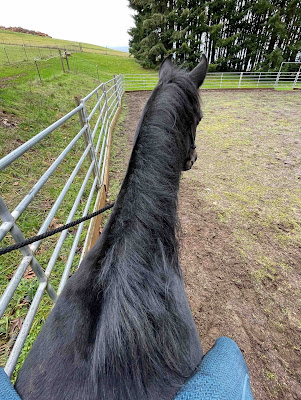 Love the view - something I would never have seen on my own - never having had the opportunity to ride a horse. Great start of a new year.

Yes, the world looks wonderful from the back of a horse, Elaine; I'm sorry you've never gotten to experience it!