Kicking up and stepping out

Today I turned Stella out in the lower pasture while I rode Lance. She was unusually 'animated,' alternating back-cracking bucks with racing up and down the hill and through the trees. Her behavior inspired my usually sluggish mustang to attempt a couple launches himself; thankfully that didn't escalate but we headed down the lane and away from temptation after our warm-up.

When Lance and I returned, Brian had finally gotten up and come down to clean stalls, so I asked him if he would help me again with Stella. He agreed, and held her while I mounted her from the arena fence, once on each side. She was much easier to position this time, not nearly as nervous about what we were doing. Brian thought we should try walking around, so we traded places so I could lead her. She startled a little but Brian stayed on and she settled, so we continued walking for a few minutes. Yay for another big step forward! 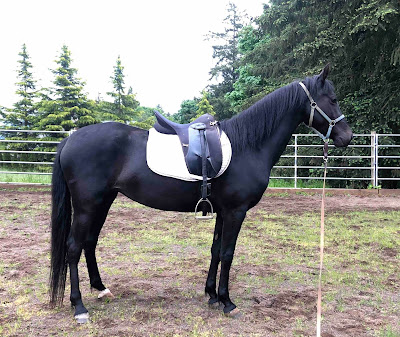 Yay for Stella!! That is so exciting! I'm thrilled that she's behaving so well.

By the way, I've been wondering how many students are graduating with Brian...

All your patience has paid off :-) I'm so excited for you to have these great strides with Stella in the midst of our world gone crazy. So, so awesome :-) :-)

There are 14 in Brian's graduating class, Jeanne.

Yes, patience does pay off, A. I've doubted myself a few times through this, but stuck to my gut on dealing with this girl. I want a lifelong trusting partnership and you can't rush trust.