All dressed up with nowhere to go (yet)

After trying on the smallest bridle I had* as well as Dinah's old bridle offered by Kate, it was clear that my pretty cinder-ella needed the equivalent of her own 'ballroom footwear."

I looked on eBay for cob-sized bridles, and although I've been able to find great deals there before, I struck out. So last week I stopped by the local chain farm store to see what they had, but there were no cob sizes in their limited English stock. I picked up the other things I needed, then checked out the bargain bins and rack. Lo and behold, there were two dressage bridles . . . but both were full-sized. One, however, was smaller than the other, and had narrow straps and a pretty silver-accented browband that would look lovely on my girl. The price? An unbelievable $19.95! I confirmed that I could return it if it didn't fit, and took it home to Stella. Eureka!!! 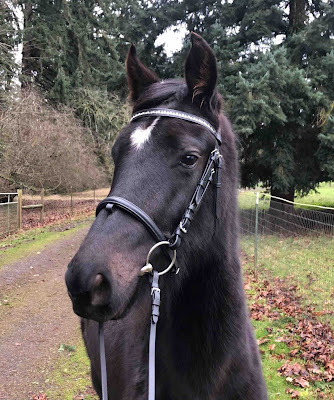 Here she is modeling her new 'ballroom finery,' including a new bit that I found at the same chain farm store but in a different town where they have a bigger selection of tack. The cavesson could use another hole punched in it for optimum fit, but it's fine for now.

We continue daily interaction and I work with her in some way very nearly daily. She is still very wary of lots of things – quick movements, unexpected sounds (like a sneeze), anything lifted up to or over her head. But slowly, surely, she is engaging with me more, bit by tiny bit.

Last night I planned to exercise Lance after lunging Stella, but something was wrong. I had given him his wetted alfalfa pellets with supplements and meds but he was having trouble eating it, and looked dull. So I led him up to the house for  Rick to examine. Under his tongue Lance had wads of grass seedheads – and very red, inflamed mucous membranes. Poor guy; he was in PAIN! Rick manually cleaned out the junk, rinsed Lance's mouth with water, gave him an injection of dexamethasone – and ordered me to stop feeding "that %*%#$&* hay" to the horses. That  "%*%#$&* hay" is the last two tons we bought after the load Brian and I got. Rick didn't like the looks of it from the git-go, calling it cheatgrass, even though our farrier was sure it was bentgrass (showed me the seedheads to prove it)  and the horses have been eating it just fine. Oliver has also been showing signs that his mouth is bothering him, so he probably needs the same intervention. I haven't seen any indications that Stella has problems, maybe because she carefully picks at her hay instead of diving in and chowing down like the geldings. At $200/ton the hay wasn't cheap, but we were beggars and therefore not choosers; I'm not sure what we're going to do with the offending hay and if we'll have enough to get through until this summer without it.

*I would have tried Breezy's bridle on Stella, but I couldn't find it anywhere . . . until this morning. I had brought it up to the house to clean and list on eBay, along with her halters. Breezy's bridle is brown so I would have eventually wanted a black bridle to show in anyway, but I decided to clean up Breezy's fancy Western show halter and try it on Miss Stella. I think it's worth keeping! 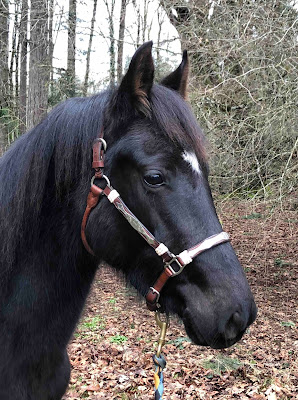 Love the western halter on her :-). I may send you a picture of my Lance with his bitless bridle set up for fit approval. I've never used one before, but he has a teeth issue so I'm going to give it a try. Fit seems weird, but looks very similar to your Lance, so maybe okay. It's a very big head to try to fit ;-).

I'd be happy to look at your bitless bridle, Sara. Sounds like our Lances share head size as well as names. ;-)

That Stella! She is such a pretty gal. Hopefully she will get more comfortable soon with everything. Baby steps.

Elaine, today it seemed like she was more skittish than ever. Lots of training opportunities; I tried to use them.

I enjoy this blog so very much...thanks for sharing!

The pictures of Lance and Stella are so much fun to look at.