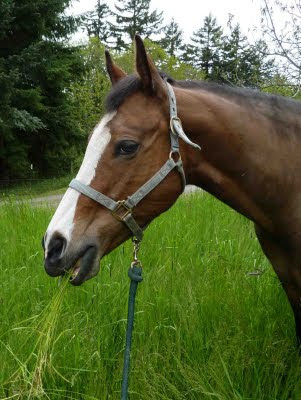 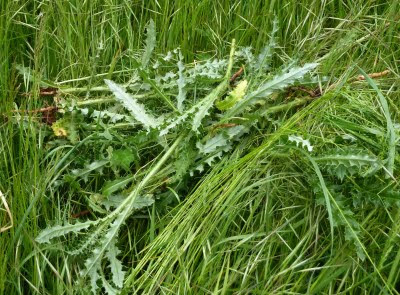 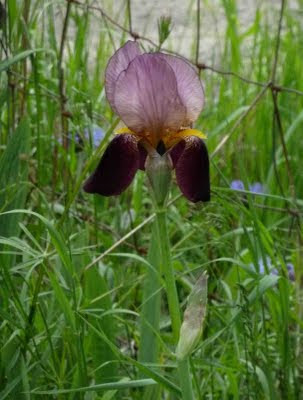 This afternoon Rick wanted to get the other three horses out on pasture for a little while before the rain starts again tonight, so I haltered Russell to keep him from moving around too much and led him out for some grazing as well. 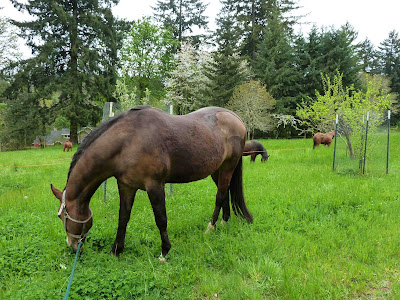 Things were tense at first; he was being a bit of a horse kite until he realized he wasn't going to be separated from his buddies and he was going to get to stuff his face. No evidence of discomfort, even though I cut his banamine dose in half again this morning. If he stays comfortable at the 250 lb. dose, we'll wean him off completely in a few days. I think that's pretty fantastic, considering it's been less than two weeks since his wreck. 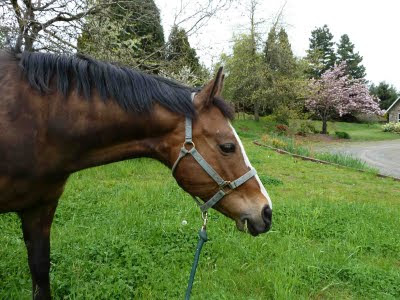 Russell continues to be stable on (reduced) twice-daily banamine and a morning dose of GastroGard for safe measure. By last weekend we had opened access to his covered paddock again; it has a threshold and step-down, so we didn't want him attempting that when he was still unstable. The swelling in both hind legs is gone, and he feels good enough now that when he sees me coming with the tubes of medication, he heads for his paddock to avoid me. :-) His gait in the left hind leg is slightly different; he's learned to compensate for the muscles attached to the broken portion of his tuber coxae. You can also see a subtle difference between his two "hips" if you know where to look; evidence of the broken bone. But it's not the noticeable "dropped hip" you see when the entire TC has fractured off.

Yesterday morning while doing chores I noticed a new development; he had developed a fluid pocket that looked at first glance like a second sheath! 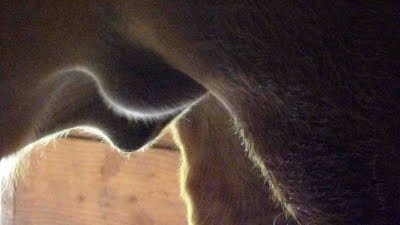 Rick said it's probably a seroma; no big deal. His body will resorb the fluid eventually.
Posted by Michelle at 11:23 AM 3 comments:

The sky is grey, but things look brighter

Yesterday Russell went from bad to worse before we got the pain under some control by evening choretime. This morning he was acting SO much more comfortable, moving slowly but steadily around his stall instead of careening and crashing against walls. I am so thankful for answered prayers, mine and those from so many of you and others. 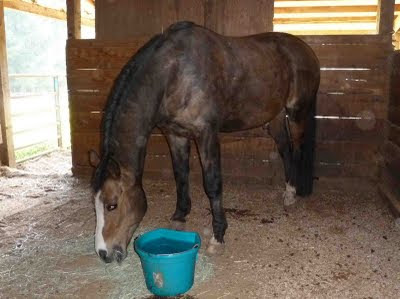 Russell in his corner yesterday morning. 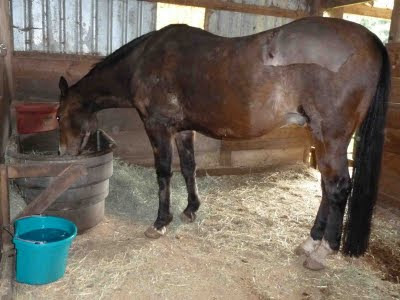 Russell at his feeder this morning.

Rick reminded me that years ago one of his patients had a similar injury. After months of stall rest, Lean With Me went on to win multiple championships. Here's his story:

Known as one of the most natural and truly blessed Reining Horses within the Quarter Horse breed, Lean With Me is a champion of champions. Shortly after being titled the 1993 NRCHA Snaffle Bit Futurity Reserve Champion, Lean With Me suffered a near fatal injury of a fractured pelvis that almost ended his career. With God's blessings, a great trainer (Bob Avila), and the love and prayers of his owners and admirers, Lean With Me beat all the odds and went from being a cripple to a champion making his mark in the AQHA industry. In 1994 he returned to the show ring, competing in the Bruce Gilcrest Memorial Futurity and winning the OQHA Reining Championship. From there it was on to the AQHA World Championship Show in Oklahoma City, where he earned his first "AQHA World Championship in Junior Working Cow Horse." But Lean With Me was not through winning. In 1995, he returned - once again - to win the OQHA Reining Championship; earned an AQHA Superior in Reining; won the prestigious NRHA Derby (for $20,000); and returned to the AQHA World Show to gain another title as the "1995 AQHA World Champion Senior Reining Horse." Sired by Smart Little Lena, he is out of one of the best mares in the U.S., Chexy Lady. She is the producer of 10 AQHA World Championship titles. Now retired, Lean With Me is standing in Texas. His offspring are following in their sire's footsteps. His first foal crop included: NRHA, NWCHA, and NRBC Futurity Finalist, NRHA Derby Finalist, NRCHA Snaffle Bit Futurity Finalist, NCHA Money Earners, AQHA World Show Qualifiers, and AQHA & APHA ROM and Point Earners. To date, Lean With Me's offspring have won or been finalists at the Congress Reining Futurity, and many NRHA Reining and NRCHA Cow Horse Futurities and shows across the United States and Canada. 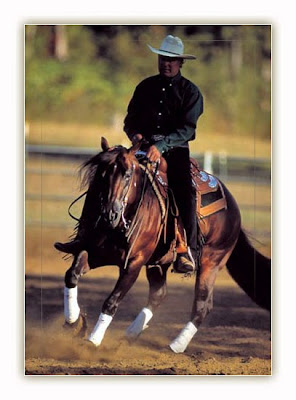 THAT'S inspiration!
Posted by Michelle at 10:14 AM 5 comments:

Yesterday Rick examined Russell to see what damage he did during his Monday night escapade. The good news is that his healing suspensory ligament still looks good, so he didn't re-injure it. The bad news is that he fractured the left tuber coxae of his pelvis when he hit the tree, and not in the usual place one sees these types of injuries. Rick said the prognosis is usually good with sufficient stall rest, but Russell will undoubtedly be sore for awhile.

That summary did not prepare me for what I found this morning. Russell was standing in the corner of his stall, and didn't move when I served hay. He obviously wanted to eat, but when he thought about moving, the pain in his left hindquarter was clearly incapacitating. He had been standing there awhile, as evidenced by both stool and urine. I ran back to the house to report this to Rick, and he kicked himself for not giving Russell more banamine last night. I put hay on the stall floor in front of Russell along with a bucket of water, so he would have something in his stomach before I gave him a dose. Russell eagerly ate when he didn't have to move to do it, so that was one good thing. Rick came down and did a rectal exam just in case he had missed a central pelvic fracture the day before, but said everything seemed to be intact. Unfortunately, the exam was uncomfortable for Russell so he tried to move away, and nearly fell down in the process. He is not stable or comfortable standing or eliminating, cannot lie down, and is at risk of crashing and falling every time he tries to move. If he does fall down, I'm not sure we'll be able to get him back up. It is extremely upsetting to watch when he starts scrambling; I can only imagine how frightening it must be for him. We are trying to get the pain back under control, and pray he doesn't founder with the added strain to his other three feet.
Posted by Michelle at 6:08 PM 4 comments: 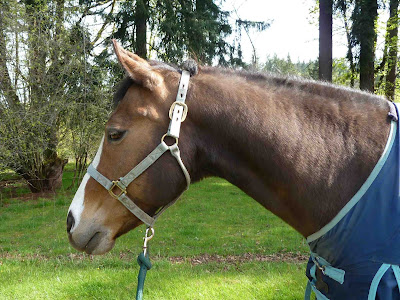 Since Friday I've been taking Russell on daily walks. Just ten minutes a day, baby steps to build up his strength again. Rick gave the go-ahead when Russell's post-treatment ultrasound showed "remarkable" healing, but cautioned me against doing too much. I was thinking about calling the Morgan's owner to give her an update.

Last night while I was doing chores, Russell squeezed by the manure cart in his stall door while I was in his paddock. I think the tastes of spring grass I've been letting him have on our walks were irresistible, because the escape was out of character for him. He was gobbling grass just as fast as he could at the edge of the nearest pasture when I walked out of the barn, but wasn't so focused on it that he let me walk up to him. Oh no; he charged off with his tail in the air without regard for his still fragile ligament, while my gut twisted inside me. I walked after him in the dark, feeling the uneven, still muddy ground under my boots, knowing how much damage he could do with a slip or scramble. I broke down in tears as he kept charging away from me from one end of the pasture to the other. Rick got home in the midst of this and tried to help, but only caused a bigger rodeo. In one wild sprint from us, he ran between the fence and the only tree in the pasture, hitting the tree first with his shoulder, then his hip, ripping off his sheet and leaving hair and hide behind. 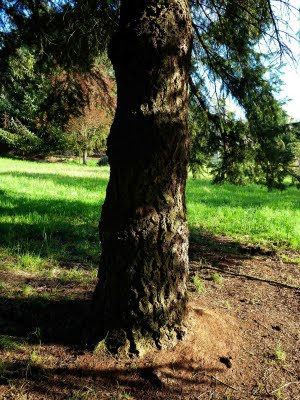 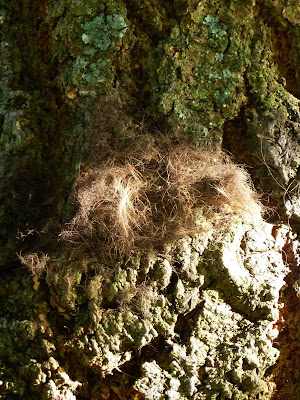 That apparently hurt enough to sober him up, as he let Rick walk up and halter him, then lead him, limping, back to his stall. I'm still shedding tears.
Posted by Michelle at 3:00 PM 5 comments: