Yesterday I squeezed in an afternoon ride (mostly) between raindrops. The arena was sodden, so after our walking warm-up, we went down the lane and back to avoid damaging the footing. I asked for brief bits of lateral work, trot, and canter, but we mostly walked. Any more than that hardly seemed fair, because when I went down to the barn and timed Lance's respirations just standing around in his stall, he was at 38 breaths/minute. He's also coughing some when I ask for more than a walk.  :-(

I'm going to thoroughly clean out and rebed his stall today, but other than that there's not much else I can do for my boy. At least he's holding his weight and not showing a heave line.
Posted by Michelle at 12:31 PM 2 comments:

Mixing it up but keeping it moving

Lance has made it to "exercise class" every day but Thursday this week – and went twice today! (Rick turned the boys out in the arena while he worked on Ollie's paddock, and they played long and hard.)

I'd much rather increase Lance's exercise than reduce his hay to manage his weight, since horses are designed to graze throughout the day. Lance gets "hangry" between meals as it is; makes me wonder if he has ulcers. So regardless of how I feel (I've been so tired lately) or how much hustle it takes get through my to-do list, I've been dedicated to getting Lance moving in one way or another as often as possible. I do vary our activities for mental and physical benefit; besides schooling in the arena, utilizing our "gymnastic equipment," and riding down the lanes, I sometimes lunge him – which gives me the chance to photograph my handsome Lance. ;-) 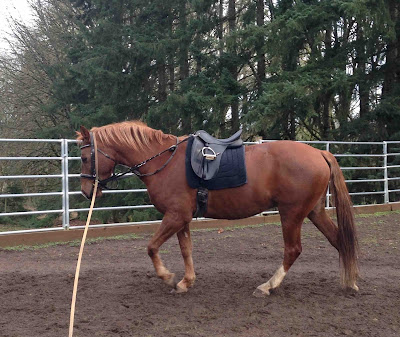 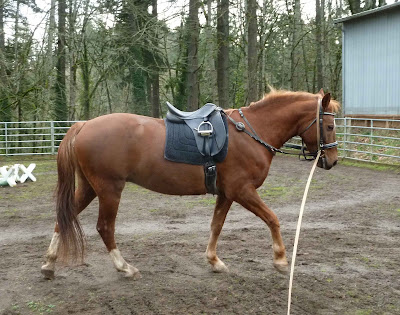 The red-tailed hawks continue to ply the sky above our hill; I snagged a shot the day I lunged Lance: 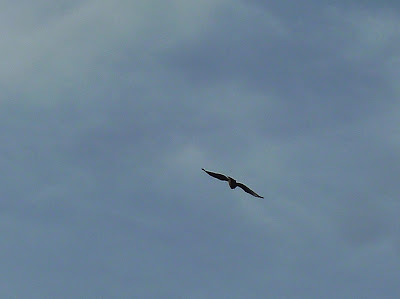 The weather has been mostly gray and soggy this week, but I've been blessed with dry windows every time I've gone out to work with Lance. I always feel lucky when we dodge the raindrops!
Posted by Michelle at 9:46 PM 2 comments:

It's just one gorgeous weekend after another!

We had some rainy days last week, but the weekend has been glorious again. We were at church or with friends all day Saturday, so the only horse I was able to get on was at the Salem Carousel (thanks to an old punchcard I have).
Sunday I didn't let myself ride until I cleaned up the arena. Rick had "mowed" up the leaves early in the fall, but hadn't done it again once all the leaves were down. Grinding them into the sand affects drainage in the winter and dustiness in the summer, so I've been limiting our work to the relatively clean half. No more; I went out with rake and cart and cleaned the whole thing. Rick came in at the last and helped me pull some dead weeds, then used the teeth on the front end loader to groom the rougher end. Riding in that clean space afterwards was as refreshing as clean sheets! 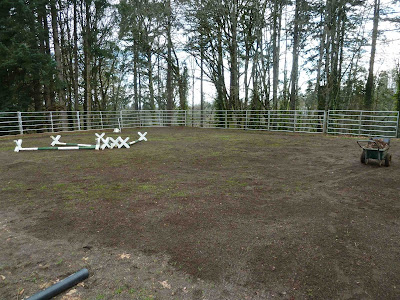 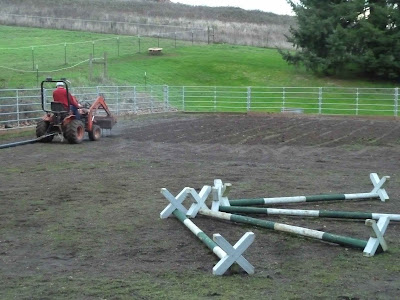 Monday was another gorgeous day, so Lance and I went on a road/trail ride. Winter had knocked a lot of the weeds down so we were able to take the track through the woods for the first time in many months. 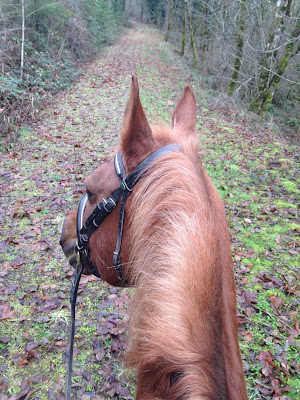 We came back home along the vineyards, watching red-tailed hawks courting against a backdrop of of snow-capped Cascade peaks. The breeze blew Lance's mane and I was lucky enough to capture a shot. 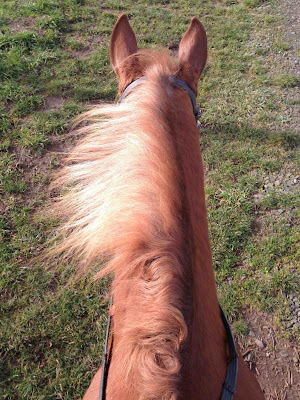 It's only long on the upper half, but dorky as it looks I've left it as it gives his neck some protection against the mosquitoes he's allergic to.
Posted by Michelle at 8:17 AM No comments:

Hello there, my meaty mustang! 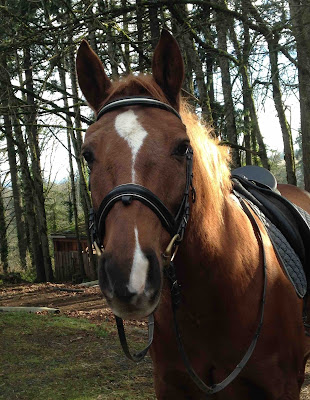 (This is one of my new favorite photos of Lance, inspired by all the great photos Alanna shares of Emi just standing there. I got lucky; Lance doesn't usually cooperate when I "park" him like this to get a photo!)

I've been trying to get Lance out for exercise more often because he's FAT. He's also coughing some so may not feel like exerting himself, but there's no benefit to being a stall-potato. Last night I didn't have time to ride, so I worked him on the lunge-line for 20 minutes or so. Today I'm hoping for a longer ride than usual....

In my last post I mentioned that Lance took a couple of odd steps during our ride that day. The next day (Jan. 4) on our way home from school, Brian mentioned that when he entered the barn that morning Lance was laying down in his stall. When Brian went in to clean, Lance got up and staggered around "like his hind legs went to sleep," then leaned against the door frame briefly before walking out (normally) into his paddock. Mental warning bells went off; I started quizzing Brian for all the details. After determining that there really had been an ataxic episode of some kind, I called Rick. Fortunately for me (but not for our bank account), he hasn't been busy, so he made time that day to exam Lance.

The verdict? Move along; nothing to see here (at least right now). Lance checked out completely normal, even though he was a little hard to evaluate during flexion tests because he was a silly, playful TWIT who would not trot off in a straight line! So we've been just keeping on keeping on.

Saturday afternoon I squeezed in a quick ride between our busy comings and goings – it was just too beautiful not to. The mountains were glowing in the late afternoon light on our way down the lane, and on our way back home even the "elephant in the neighborhood" looked lovely:

Don't look if you're in the deep freeze!

The beautiful weather that has kicked off our year continued today. Cool nights, gorgeous sunrises, sunny days; I'm squeezing in rides whenever I can! 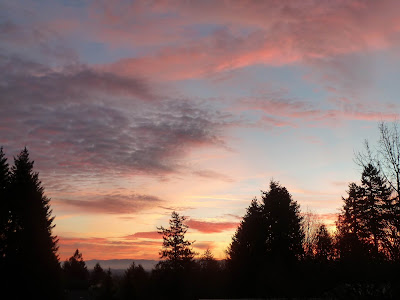 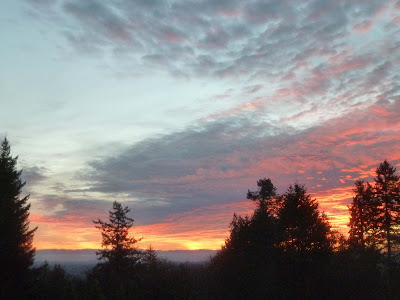 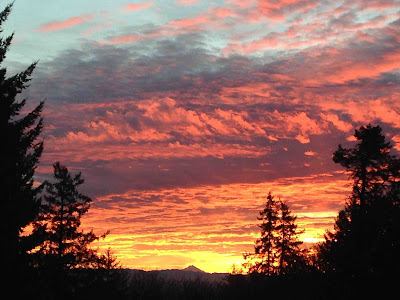 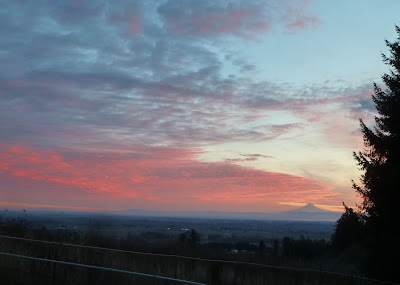 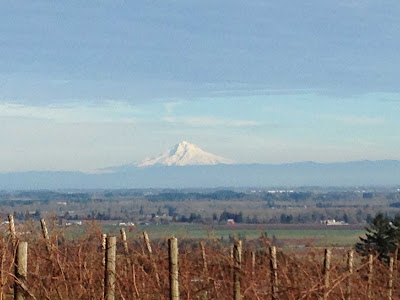 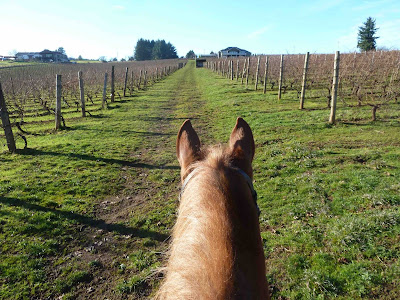 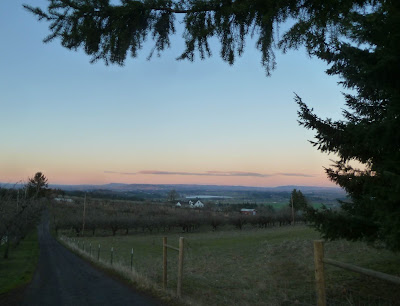 Lance is really sluggish under saddle, and today I felt an odd shift in his hind end a couple times. I will have to bug my vet about checking him out....
Posted by Michelle at 10:59 PM 1 comment:

Sorry for the month-long silence, if anyone missed us. After a great goal-reaching November, December was less fulfilling. Not bad, mind you; just more difficult to stay on track because of weather and commitments and company.

The first two weeks of December were clear and beautiful by day and cold by night. The ground got progressively harder until it was frozen solid, affecting how much we could safely do. When it finally warmed up it rained (a lot), I was busy hauling Brian to basketball practices and games, and then my folks arrived for a week. Except for that last week, I did manage to maintain our minimum standard of no more than two days off, but I don't think Lance once broke a sweat, so he ended December like so many do – FAT. ;-) 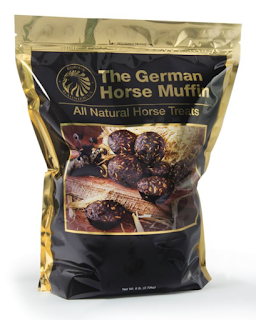 It was from lack of work, though, not from Christmas cookies . . . or these. Early in December at our Oregon Dressage Society chapter Christmas party, I got a bag of German horse muffins. Lance is a BIG fan; I think I could train him to do ANYthing with enough time and those treats! Here he is mugging for them: 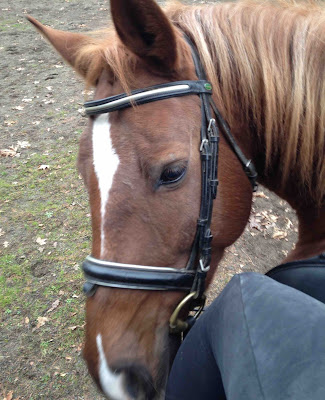 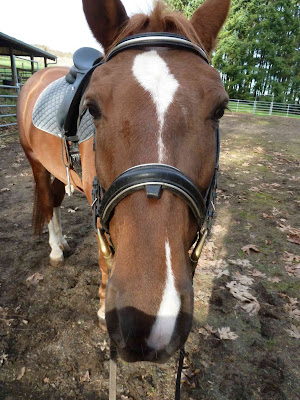 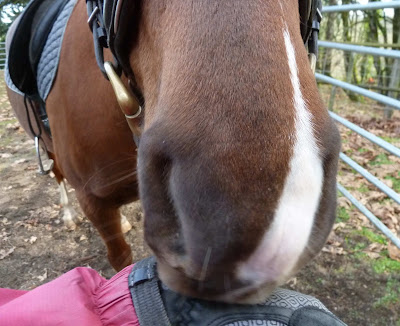 At least I can get good "carrot stretches" using them – ha!
Back to my title. Yesterday we were finally able to saddle up and head down the local lanes on a beautiful, sunny day, 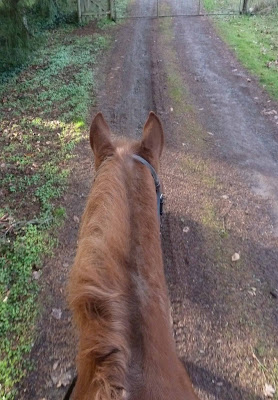 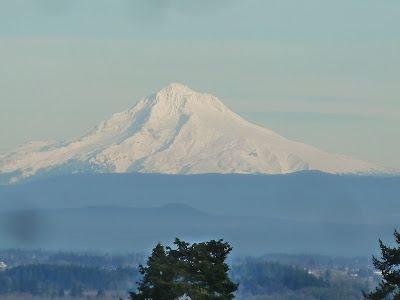 and this evening we schooled for a bit in the arena while the supermoon rose, thereby both ending one year and beginning the next as we mean to go on. Hurray! 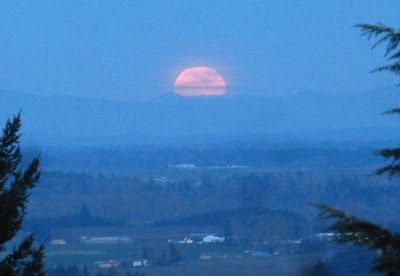 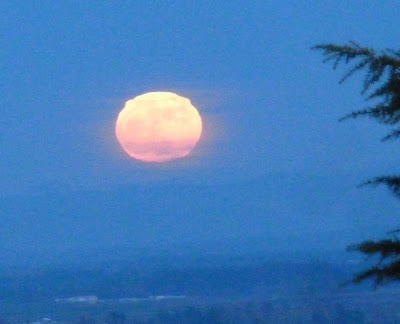 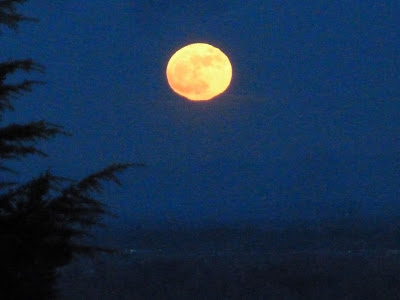 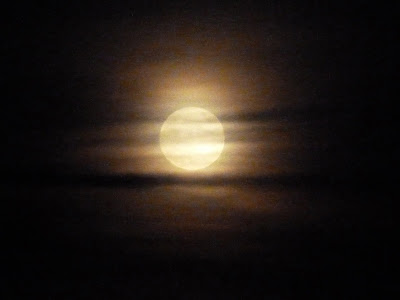 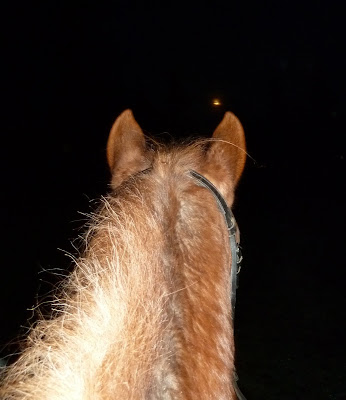