I rode on Wednesday last week, and then was gone for two days for a quick road trip. I don't usually ride on Saturday, but figured I'd be back in the saddle yesterday, after just one extra day off for my boy (I strive to take no more than two days off between rides). The forecast was for sunny, dry days in the low 70s through the weekend – perfection!

Well, I have never experienced such a Dr. Jekyll/Mr. Hyde change between the forecast and reality before in my life! A typhoon left Japan and headed for the Pacific Northwest, and it's been dumping on us since Friday: 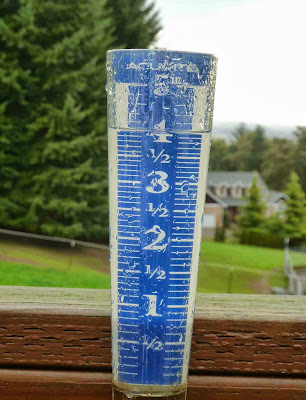 There are breaks between the showers and downpours today, but I'm too swamped with homeschooling and other duties to try and take advantage of them. I've got to at least turn the boy out for a romp and a roll; he's starting to act like the cooped-up colt on stall rest I was dealing with before bringing him home!
Posted by Michelle at 12:02 PM 1 comment: 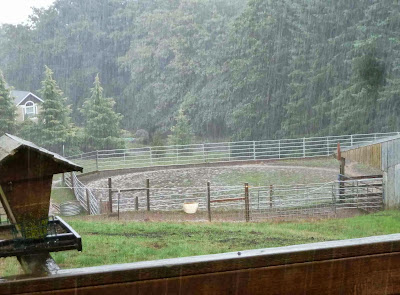 It is raining again, and I don't care! I had another great schooling session on Lance before it started, after doing chores (rather late) and getting Brian through two of his school subjects.

I turned Lance loose before riding again, since he didn't get out at all yesterday. I like Mary's term – a horse needs a chance to "get its ya-yas out." This time he just had the saddle on, no bridle, so when he paused to snatch a snack from the overhanging maple tree, I let him. 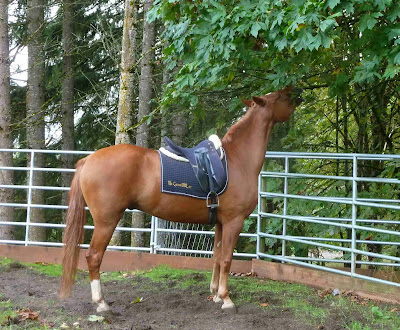 A thirst for the thistles coming up along the baseboard? Go for it! 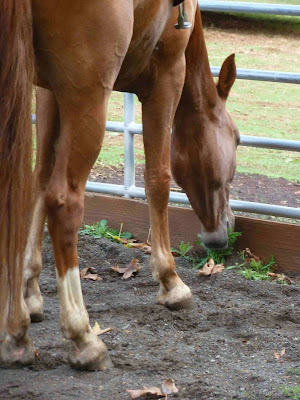 As for our ride, Lance's canter departs – even the problematic right lead depart – are getting better and better. After observing his right lead canter departs in our last lesson, Julie's opinion was that the problem was attitude, not comfort or ability. Her counsel was to make sure Lance was giving me a forward, quality trot with an active inside hind before asking for the canter with correct, light aids. (I had ceased using my outside leg since it seemed to irritate him.) It was obviously good advice!

Lance is also responding better to the "coiling and releasing the spring" work at the trot. He's actually giving me some half-steps instead of trying to drop to the walk when I bring him back with strong half-halts. I'm so proud of his progress!
Posted by Michelle at 1:41 PM 1 comment:


How quickly it happens. After a summer of being out all day every day, the horses have been kept in more often lately due to threat of rain. No, the horses wouldn't melt, but our sloped summer sacrifice pasture gets "slicker 'n snot" with just a bit of precip.

I rode Monday-Friday last week, but wasn't sure when I'd get to ride again from the looks of the forecast. Our first seasonal storm was supposed to arrival with the Autumnal Equinox, and it did get dark and windy and rainy for awhile. Then late this afternoon, the clouds broke up and the sun broke through. Having worked through the majority of my to-do list, I changed into my breeches (a fleece-lined pair!) and headed to the barn without a twinge of guilt.

Lance acted cranky while I got him groomed and tacked up, and seemed a little fresh when I lead him into the arena. I decided it wouldn't hurt to tie up his reins and turn him loose for a few minutes. Well, the first thing he wanted to do was stop, drop and roll – with the saddle on. Fortunately I was able to dissuade him of that idea, but only with the application of my dressage whip. Then the rodeo began; you would have thought he'd been cooped up for a month instead of a day! By the time I thought to grab my camera, the action was more tame. (The photos aren't great, but I still think he looks lovely; he carries himself so well!) 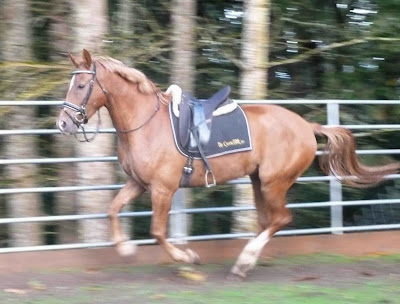 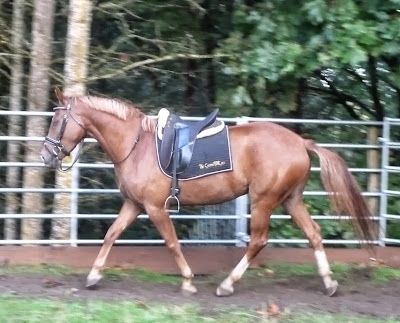 When I called, he was ready to come, 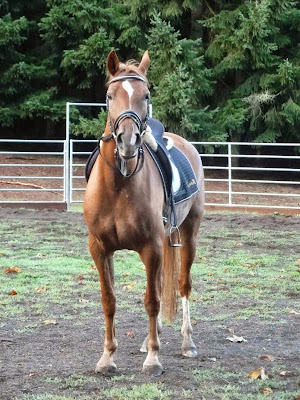 and we proceeded to have a good ride. As with every ride last week, he ended up with "lipstick," always a welcome sign: 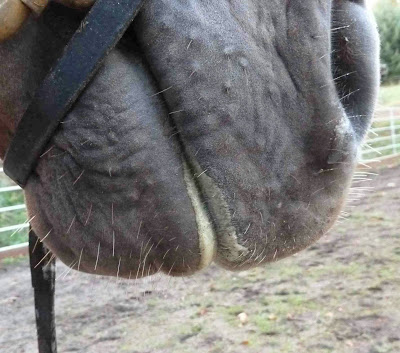 As I write this and watch the nightly news, it is raining hard again. I'm so happy I was able to shoehorn in a ride!
Posted by Michelle at 10:39 PM 2 comments:

Or would that be Second Level?


It's been a good week with my handsome prince. We had a great lesson with Julie on Wednesday, after two good rides on Monday and Tuesday. Last night I put on his Renegade boots and rode him down to get the mail by the light of the brilliant harvest moon. Then this morning I got up, did chores and got in another good schooling session before the predicted rain. (Yeah, I'm feeling pretty smug about that bit o' time management. ;-)

It's hard to say if our dances were better due to a costume change (I used the Wintec), a shift in my focus (lesson coming up/just past), or the full moon. ;-) Whatever; I'll take them.

During our ride on Tuesday, we progressed from schooling prompt trot/halt/trot transitions to "coiling and releasing the spring" at the trot – asking for a bigger trot, then bringing it back to a more collected trot – for the first time. In our lesson with Julie, we worked on trot lengthenings for the first time. These two exercises sound similar, but are actually very different in execution and purpose. Trot lengthening is only done in USDF First Level tests, but the self-carriage, collection and impulsion developed by "coiling the spring" is useful all the way to Grand Prix. I've heard it said – and agree – that not every horse has a lengthening, but all horses are capable of developing medium and extended trot (although not all medium and extended trots are created equal, of course). Depending on how things develop over the winter and spring, we may flit briefly through First Level on our way to Second Level – or skip First Level all together!
Posted by Michelle at 9:00 PM 5 comments:

Go to forrestblissphoto.com (that's a hot link to make the first step easy).

Click on the bar in the upper left of your screen labeled "Proofs–Events/Shows."

Click on the dark purple type that says "I Agree To The Above Information - Take me to my Proofs" (the line under the paragraph in red).

Now there are three 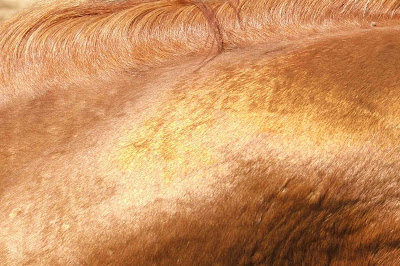 Lance and I have had to work around road construction in the arena this week:

Brian used to play in the sand often while I schooled Russell, the horse in my header. But he hasn't touched these toys for years. What inspired my lanky 11-year-old to dig them out of the weeds and make tracks and hills in the sand on Sunday, I'll never know. Seeing them there Sunday evening when I took Lance out for a schooling session brought back memories and tugged at my heart.

I schooled Lance Sunday and Monday, then gave him yesterday and today off while we endured a late-summer sneaker wave of heat. He hung out in the pasture with Ollie and Breezy – but not Sam, Rick's old cutting horse. We let Sam hang out in the barn so he didn't have to move far for food and water.

Brian noticed that Sammy wasn't eating with the other horses Tuesday morning, so Rick brought him in and examined him carefully. Sam's body condition has really gone downhill over the last couple of years, in spite of the calories we are pouring to him; he can't afford to lose his appetite. Then there's his labored breathing, which has been noticeable for months. An ultrasound of his chest didn't look normal, but his bloodwork is. He could be suffering from congestive heart failure, or cancer, or – who knows. At age 27, there isn't really any more that can be done. My husband has made a lot of memories with and on that horse over the last 20 years, and the prospect of putting him down is tugging on ALL our heartstrings....
Posted by Michelle at 10:57 PM 3 comments:

Dressage takes a detour, but is not derailed

The day we spent at the State Fair Mustang Show was long, warm, and HUMID; I don't think I've ever sweat so much! We were totally out of our element, but Lance was such a good boy and I had fun hanging out with the mustang exhibitors and Wanda, who came and supported me with her friendship and ready help for most of the day. Lance's Kiger sire Riddle Me Dino was there and Dino's owners were also incredibly supportive; I heard them say several times, while pointing in our direction, "That's a Dino baby!" I think they liked my Lance. ;-)  Some strangers in the stands really took a liking to my handsome horse, too, giving me thumbs-up and big smiles when I rode by, and clapping and cheering wildly for him in the line-ups.

So how did we do? The judge didn't favor us much; we came home with five pretty ribbons, but none of the blue or red variety. We placed third out of five in the halter class; Lance surprised me by standing pretty quietly instead of fidgeting. We also placed third out of five in the trail class, even though it had few of the elements I was expecting, other than backing through an L and then sidepassing back along the L which we didn't execute cleanly. I thought we'd do best in the three English Pleasure classes, but slipped to fourth and fifth places in those, thanks to making our only mistakes right in front of the judge. :-/  Oh well, it was good experience, and fun overall. I don't know that we'll do it again; I think I'll save my funds for dressage shows and keep the trail-riding on the trails from now on.

The show photographer got some really good shots – but charges really high prices for them which I just couldn't justify. (When he gets them on his website under exhibitor #, I'll post the link so you can see the online proofs.) Here are some photos Dino's owner took; at least they prove we were there!

We had a good time horse-camping over the Labor Day weekend. We got to our destination in the Ochoco National Forest late Friday so threw up a high-line for the night; the next day we set up paddocks with electric fencing. I wasn't sure how well either would work for my "escape artist," but Lance was a model camper with both set-ups. 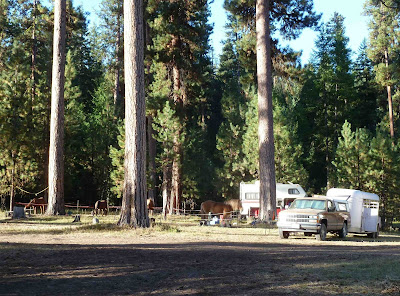 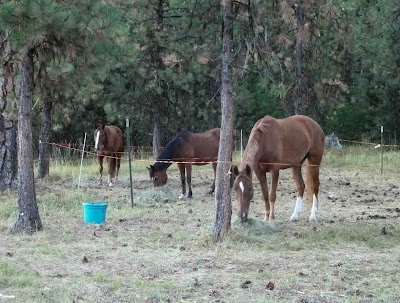 My friend Laura was there with her mare Tang, and our ride together Sunday was "the cherry on top" of the whole weekend. First we herded a range bull out of camp with our dressage mounts, who surprised us with their bravery. Then we rode through the meadow and up the hill, then down past the site of a small forest fire and back to camp. 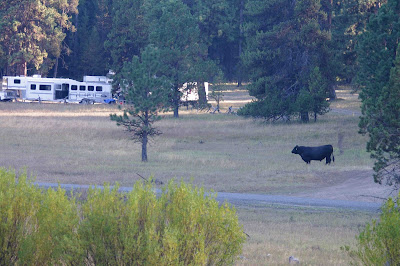 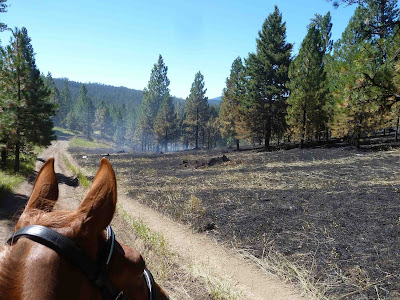 As we returned, my husband snapped some photos on the sly with his long lens: 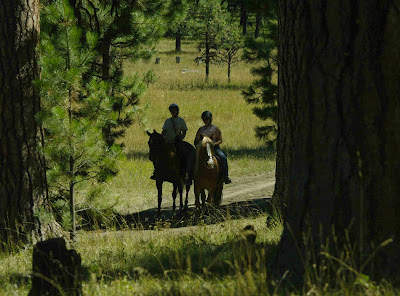 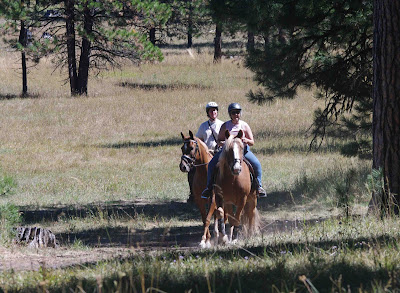 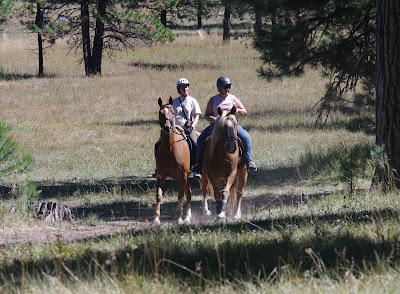 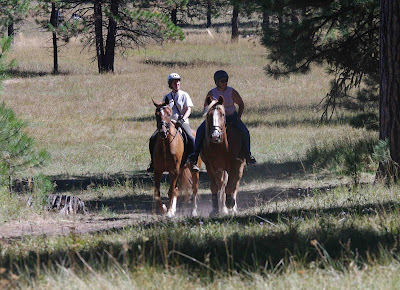 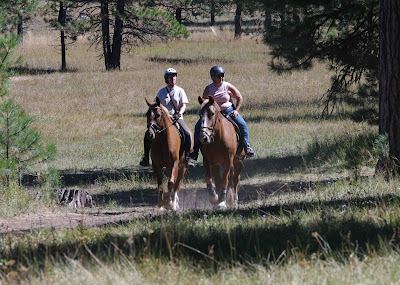 (A full report of the weekend is on my farm blog here.)

Since our return Lance and I have resumed our regular dressage schooling. I'm looking forward to taking some more lessons with Julie in the near future –and going to the beach with my boy!
Posted by Michelle at 3:49 PM 2 comments:

“I’m so busy, I can’t remember if I found a rope or lost my horse!”

Since my last post, Lance and I have been to the State Fair and the Ochoco National Forest. I'll report on both as soon as I can!
Posted by Michelle at 7:33 AM 1 comment: