Most of my riding is done alone, just me and my mustang. I enjoy that; communing with God and nature, slow-dancing with my horse. But it is also fun to ride with others, and I've had three opportunities to do that recently.

Sunday evening Rick finally made good on his promise to take me on a riding date while Brian was visiting his grandparents. Life crowded out time to go to some of the places we talked about; in the end we had just enough time for a short evening ride at the closest state park the last weekend day before Brian flew home. 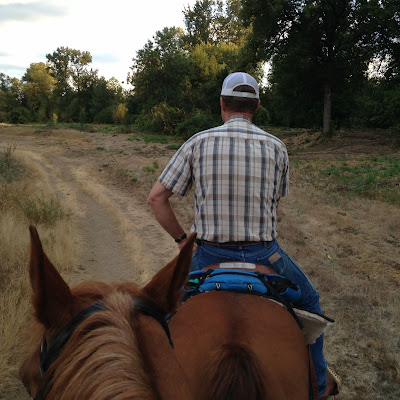 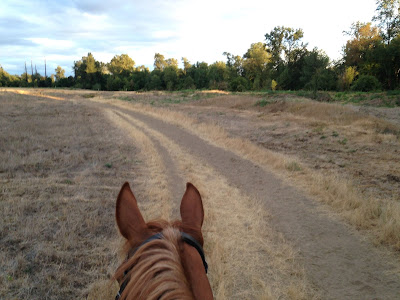 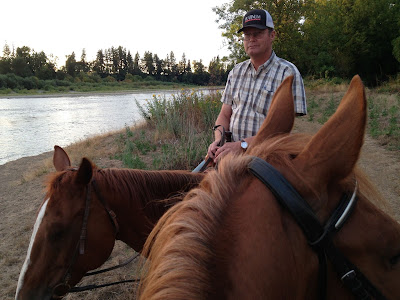 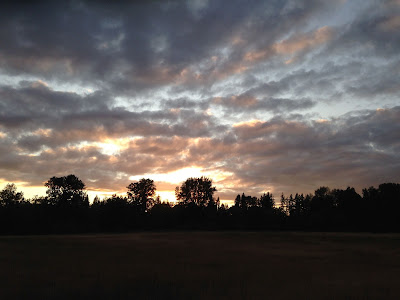 I also hoped to ride with Kate while Brian was gone. Again, it almost got crowded out, but I called her about riding somewhere on Tuesday, our last possible opportunity. Since she was only available in the morning, she invited me to trailer to her house where we could school together in her arena. Sounded good to me! 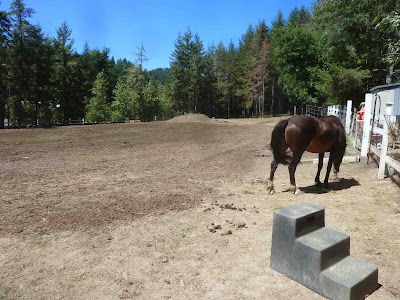 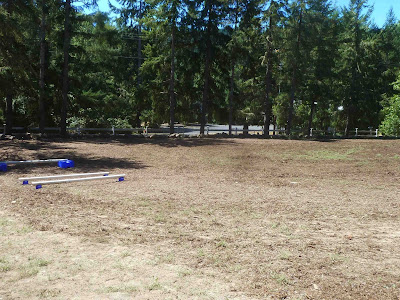 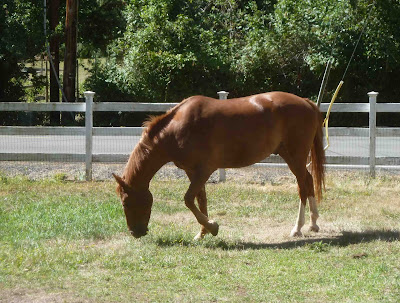 (Sorry; no riding photos.) It was nice to have a place to check in on Lance's education, and even better to find that his dancing skills are still solid. At first, though, he felt pretty disconnected and careless. He knocked over the cavalletti numerous times; I think he was too busy looking around to pay attention to his feet. (Dinah was doing her beautiful best to show off for him as well.) At one point I was half-halting his canter in preparation for a walk transition, and he tripped. I expected him to catch himself as he always has, but instead he went DOWN. I landed on the point of my left hip (BIG bruise now) and rolled out of harm's way, jumping up to take hold of the reins. There was no need to hurry; Lance just laid there sternal for long seconds, making me worry that he'd hurt himself. But he seemed fine when he did get up, and walked normally back to the mounting block. We finished our ride without incident and much more connected, because I took responsibility to focus our energies and do our best rather than letting him slop around.

When we were done with our ride, Lance got to enjoy some GREEN(!) grass while Kate and I had tea and chatted. Kate and I have been friends for 25 years, and used to ride together in her arena and around her house a LOT, because I lived just up the road from her then. It was such an amazing feeling to reconnect to that place with her; it is an amazing thing to have a friend with such history.

Brian flew in from TX last night, and on the way home he asked if we could ride together today. I had already been thinking about doing that, but pointed out we'd need to ride in the morning before the temperature soared. I can't say that we got an early start, but had a lovely ride on the hill, around and through cherry trees, around the peach orchard which was being harvested, and through the vineyards. 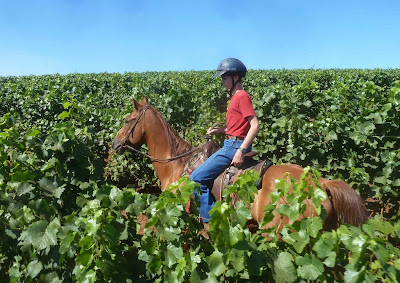 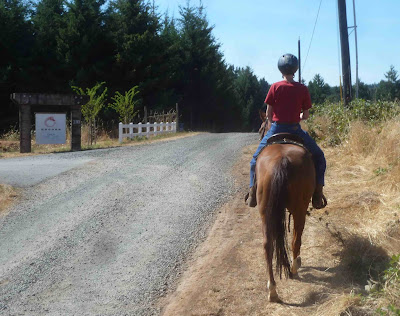 So I may not be showing, but I'm still in the saddle!

P.S. I've started sharing photos from my iPhone on Instagram; you're welcome to follow along by clicking on the logo at right.

Recently a blogpal posted photos from a dressage show she competed in. I recognized it as the same venue where Lance debuted at Training Level two years ago. Now a trainer I know and love is posting photos of her students schooling and showing at Devonwood, a gorgeous facility nearby where I have competed many times through Prix St. George, just not with Lance.

Our rides are limited to going down the lane and through whatever agricultural ground I have permission to use; there's no point in paying for a lesson with Julie when we haven't been able to school the tools she gave us last time. This is a far different reality than I used to inhabit. I miss working towards goals and getting feedback on how well we are accomplishing them; I miss the camaraderie of other equestrians; I miss getting my horse and myself spiffed up to dance in front of an audience, then entertaining questions about his breeding.

But I have much to be thankful for, and I shall focus on that....
Posted by Michelle at 4:54 PM 5 comments:

Mustangs in the forest 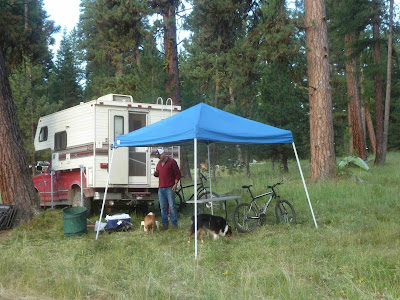 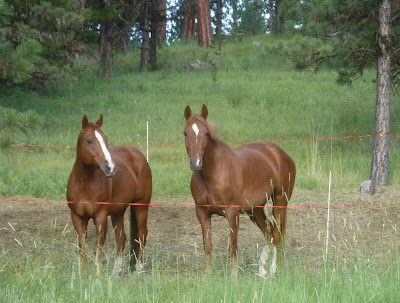 Cowboy Campmeeting 2015 was a blessing; I'm glad we went! (And I'm glad we went for a shorter period; it was just right.) We had a very small group; I think many were scared away (as I almost was) by the heat (and it WAS hot), plus the location had to be changed fairly close to the event. I didn't get photos of them, but there were three other mustangs in attendance, all of them wild-caught and BLM-branded. Some of our group also caught sight of a wild herd that roams this area; I would have loved to have seen that! (I had to "settle" for deer and pronghorn antelope.) 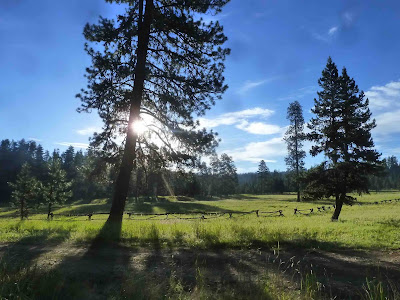 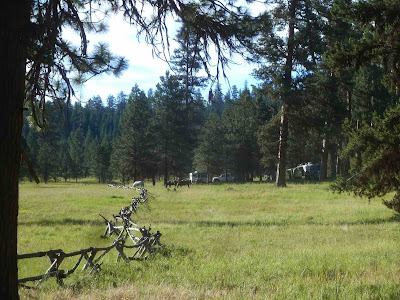 There was so much green grass where we camped, and although it was hot during the day, it cooled off nicely at night.

Lance and I got rides in Thursday, Friday, and Saturday; other than some coughing during our last ride, Lance was fine. Friend Laura hauled her horse up Friday morning for a ride; it was so good to see her again. 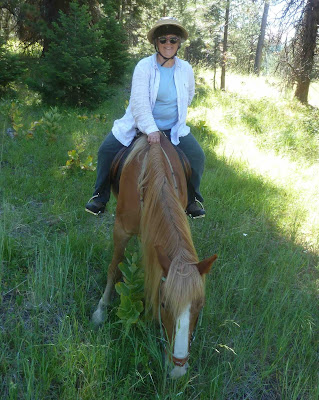 I'm going to try and squeeze a ride in this evening before flying out tomorrow morning for a week. When I return, I hope to be back in the saddle again more regularly, join Kate and Dinah for some outings, and take another lesson with Julie.
Posted by Michelle at 5:36 PM 2 comments:

Cowboy Campmeeting, here we come. We're leaving tomorrow morning, cutting two days off the trip, which makes it feel doable and will keep me from being tempted to take Lance on the competitive trail ride. Friend Laura is going to drive up Friday morning so we can go on a ride together; I'm looking forward to that. Hopefully it will be a little cooler in the Ochoco mountains than it is here, but I'm not counting on it.

Lance and Ollie really don't seem bothered by our extreme heat, though. Even when they are resting, they stand in full sun rather than seeking out the available shade. 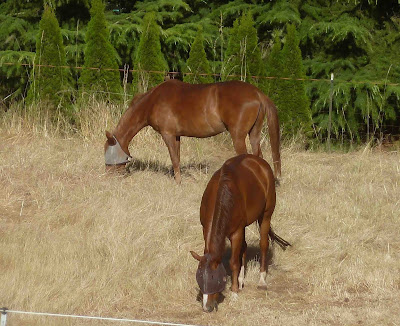 On Monday morning, I did indeed wake up early and get in a ride on Lance before work. He sounded phlegmy and coughed some, but danced nicely with me anyway . . . setting my world to rights. That should hold me until tomorrow....
Posted by Michelle at 7:55 PM 1 comment: