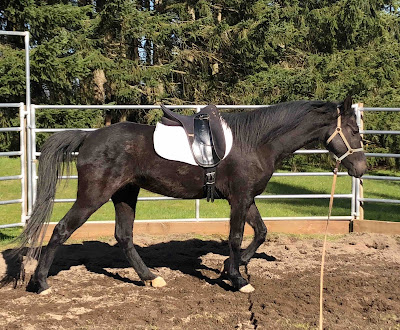 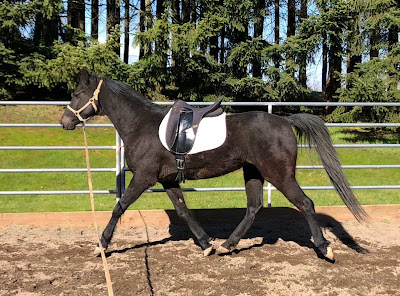 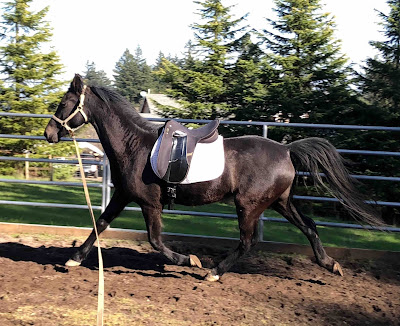 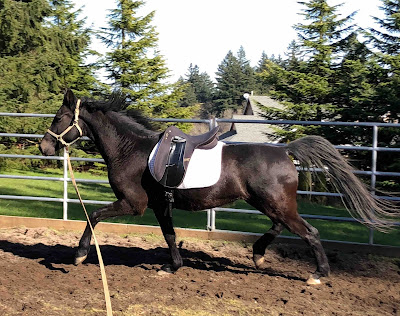 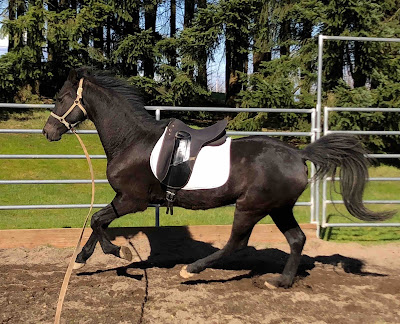 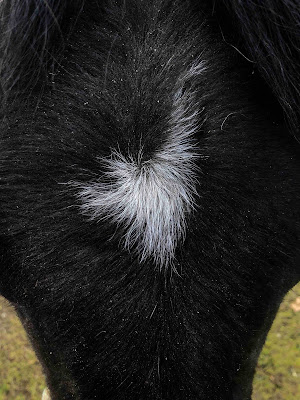 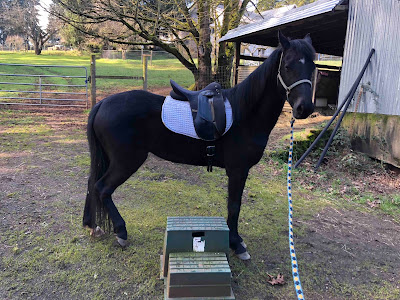 I shot that video on Sunday – just before Lance stepped on my poor puppy's toes. 😩 The bad news is that now it will probably be harder to make time to actually work my horses; the good news is that Stella is no longer hard to catch after she's been turned out to exercise herself (and she does exercise herself quite well). Being able to walk up to Stella and clip the lead line on feels like a Big Deal. Here's to more Big Deals to come!
Posted by Michelle at 10:56 PM 4 comments:

A day late but always timely 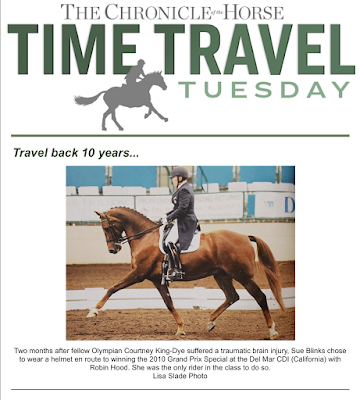 This was in my inbox yesterday. Wow; ten years ago. It doesn't seem that long since Courney King-Dye's accident, and I don't remember hearing about Sue Blinks' break-out win, but good for her. Thankfully, a lot of people have taken heed and now wear a helmet Every Time Every Ride. Sadly, every year there are still people who die or suffer traumatic brain injury just because they choose not to wear a helmet....

On Sunday I lunged Stella with saddle and stirrups again. Or rather, I hung on for dear life while she careened frantically around me, terrified of what was bumping along with her. There was no rating her speed; I tried reeling her in and almost lost my right thumb when the lunge line wrapped around it and tightened down as she sped away. Fortunately I was wearing my latex-dipped winter chore gloves and the glove finally pulled off and left my thumb attached.

Eventually, after she was completely winded and wet with sweat, I got her to walk and took a photo. See those terrifying, horse-eating stirrups??? 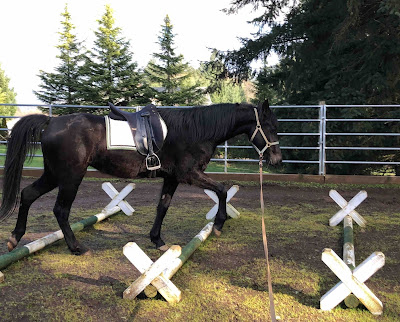 So yesterday while the puppy napped we did it again. I did change out the girth to the Shoulder Relief girth, the saddle pad, and put the bridle on over her halter. The girth kept the saddle in place better than the straight one I had been using, and she handled the stirrups better, too. 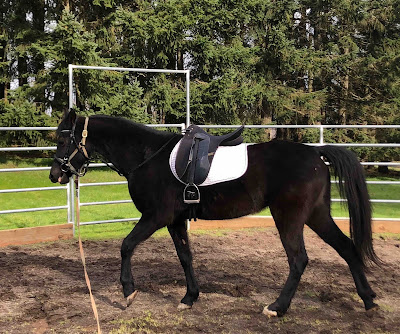 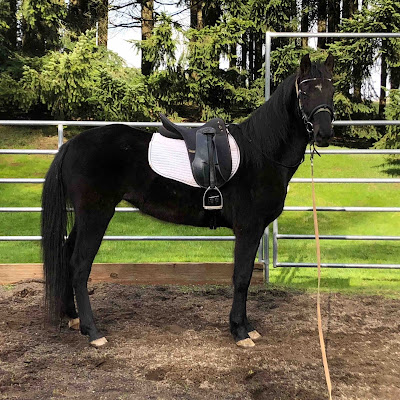 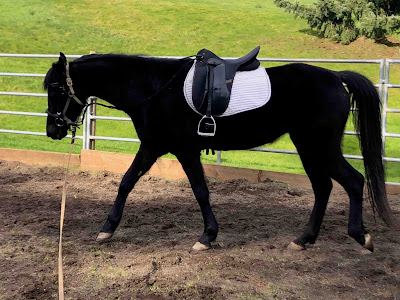 I followed up that much more satisfactory schooling session with a very pleasant ride down the road on Lance. It was a good horse day!

Today I turned Stella loose to exercise herself, then brought her in and turned the boys out. While they played, I tied her up in her paddock where she could watch them while I curried and brushed her. Then I saddled her up again and moved the stirrups all around on both sides to help her see they were harmless. Eventually we just stood and watched the boys and breathed together until she finally relaxed and even seemed to enjoy my company a bit. TTT; Things Take Time.
Posted by Michelle at 8:02 PM 3 comments:

Catching up and moving on

What with the weather last week and the puppy this week, the horses haven't gotten as much attention lately. After a turnout or two (boys and girl separately), yesterday I finally worked Stella and today I finally rode Lance.

Well, Lance did get quite a bit of veterinary attention one day. He's still eating his alfalfa pellets with daily dewormer and vitamins unusually slowly, like his mouth is bothering him, and he's been coughing more. One morning I heard him coughing as I approached the barn and I found a huge loogie in the barn aisle; nasty! So Rick took time to draw blood for a CBC to see if he was fighting inflection or inflammation (nope; totally normal) and looked in his mouth. Under his tongue was back to normal, but he had some of those tiny red spots again that are so sore, and a firm, round something the size of a marble inside his lip/cheek. Rick tried to aspirate some or what was inside it, but the clear, sticky content was too thick for the needle. Weird. He swabbed it, some of the red spots, and the inside of Lance's nose to check for viruses, and drew more blood for that as well. So when I rode him today, all we did was walk on a loose rein in the arena while Stella played so as to cause minimal discomfort.

Stella, Stella, Stella. Slacking off on the daily baby steps makes for big steps backwards. I am finding it easier to catch her both in her stall/paddock and in the arena with the new approach/mindset. Coddling her insecurities doesn't seem to  mollify them; I don't know that being more matter-of-fact does, either, but at least it gets results.

Fact: I bought her to be my riding horse. Fact: to be a riding horse, she'll have to accept things moving against her sides. So last night I put stirrups on the old Wintec I lunge her in, run up to the highest hole so they didn't hang down much below the saddle flap (sorry, it was dark; the photos didn't turn out). Walking out to the arena was fine, but as soon as she moved a little and realized something was there, I had to be quick on my feet to stay out of her way, then get her moving out on the end of the lunge line. Eventually she figured out that she couldn't run away from "it," and then didn't want to go faster than a walk (I think because going faster made "it" move). At the end I lifted each stirrup in turn out a bit from her side and then let it go to gently bump back in place, praising her profusely when she finally kept all four feet planted. It's a good next step; good thing I'm not trying to meet any deadlines!

The majority of what Stella has been shedding seems to be an extra-long "yak coat;" now she is down to what looks like a normal winter coat. I think she's gained a little weight, but the saddle girth fits the same so I'm not sure. Fitness has improved some, too. I need to work on getting some more photos for comparison.
Posted by Michelle at 10:43 PM 4 comments:

And in contrast to that nice, relaxed walk...––

That was Stella yesterday!

Stella has not been one of those horses who tries to play on the lunge line; she's really quite biddable (once you have her caught). And she hasn't always done a lot of playing during turnout. But yesterday; oh my!

We had a rare (for January) dry day, so I turned her loose and planned to ride Lance in the arena at the same time. But she was so full of herself that the boys were snorting in their paddocks, so I rode Lance down the road instead. She must have had a full hour to play, and still had plenty of "go" when I went out to catch her and bring her in. As in, "Nope; I'm not going to let you get near me!"

Sigh. Most of the time I've been taking the no-pressure approach, allowing Stella room to have a choice in what and how much she's comfortable with, hoping she'd learn to trust me as a safe place. But doggone it, there are also things horses need to learn for their own safety, like trailer-loading . . . and accepting being caught and restrained. And in the month she's been here, that hasn't gotten better; it's gotten worse. My first horse, that bookend black Quarter horse mare, was notorious for being hard to catch. Since her, I've trained my other horses to have a good recall with the principle "Make the right thing easy and the wrong thing hard," and it has worked well. Come when I call and you'll get a cookie; play hard to get and you're going to have to move and KEEP moving . . . even if you're tired and would like to stop.

So yesterday, after pondering my options, I went with experience. If Stella played hard to get, I made her keep moving. If she stopped and turned to me, or even just looked at me, I praised her. Then I started slowly moving toward her when she stopped and looked at me, praising her when she didn't move off or turn away, making her move again if she did. It took a bit, but it worked. Not for a cookie; she's not that food-motivated. But she's smart enough to work for the praise – and for what takes the greater pressure away. I'm hopeful that with this approach we'll start making progress! 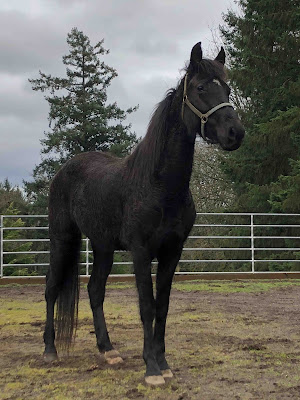 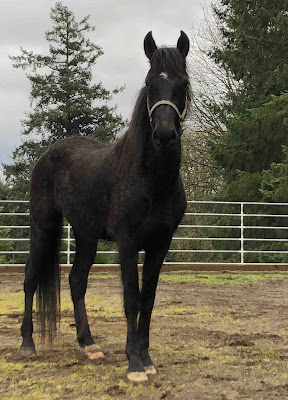