Friday I took Lance out for our third ride, and he was even naughtier than before! Since I had ridden him down our lane and across the paved road, we were not in as safe a place for him to carry on with his bucking and bull-headedness, so I ended up dismounting (very quickly, when I saw a motorcycle approaching that I was certain would provoke more reaction) and leading him home. He got plenty of schooling nonetheless; every time he jigged, I stopped and backed him up briskly; he could only proceed at a polite, flat-footed walk. If he didn't back up promptly or straight, I got after him sternly. Once back in his stall I armed myself with a pocketful of treats and a bat (sticks and carrots) and continued to school him in respect and manners until he moved over or picked up his feet at a word.

With the escalation in naughtiness, riding in our arena seems the only sensible option at this point, even if I have to water it to make the footing more stable for Lance's ligaments. But I don't have to do that for today's ride, at least; hallelujah, we got some rain yesterday!
Posted by Michelle at 8:12 AM 4 comments:

I didn't have a chance to get Lance out yesterday, so this morning I headed out bright and early to do chores and then ride before starting our homeschooling day. I hadn't made it 50 feet from the house when a searing pain hit the front of my right ankle. I never saw or heard anything but it was unmistakably a yellow jacket sting – right through my sock in the cool of the morning, the insolent thing! (I was wearing my chore shoes and carrying my jod boots.) That postponed my plan a bit, but after the extreme discomfort subsided I headed back towards the barn a second time. Sure was jumpy at the sight of every wasp, though, because the breeches I was wearing were thinner than my socks!

Lance ate while I fed and watered everyone, then I tacked him up and rode out to the stubble field again. We moved on into the adjoining field and were zig-zagging down the hillside when a distant horse whinnied. That put Lance on the muscle, which progressed to head-shaking followed by bucking. I turned him toward home, resigned to walking around the arena if that was the only way I could safely walk him for 30 minutes. When he quickly mellowed out, it occurred to me that Lance's naughty behavior was less about pent-up energy and more about expressing his unwillingness to be away from his buddies at home. I tested and confirmed my theory by riding him in medium circles towards and away from home. Bingo!

When we returned from our trip I was eager to have Rick ultrasound Lance's leg to find out if I could start riding again, even if they are to be just short rides at the walk. Then I found out that Rick usually waits about a month after the final shockwave treatment to check soft tissue injuries with ultrasound – but I still got the go-ahead for those short walking rides. Yay!

Sunday we were too swamped with post-trip work to fit in more than muzzle-nuzzle time. Monday I chose to hand-walk Lance; it seemed the prudent thing to do given how long he's been pent up. But tonight when I got home from the State Fair (more on that on my farm blog) I gave him a good grooming (he's shedding his summer coat), saddled him up (with a shorter Shoulder Relief girth that arrived while we were gone), and got on.

Aaahhh. It felt so good to be in the saddle and on my horse again! I rode him around the arena once in each direction just to check in with him; he was good so we headed out the gate to take advantage of the last light of day. The wheat field kitty-corner to our NW property edge has been harvested, so we headed out through the stubble past giant bales of straw. I leg-yielded Lance back and forward around gopher holes around the field and reveled in getting to end my day in what is to me the perfect way.

Then Lance thought he heard something in the blackberry brambles. He tensed, then bolted. That little spurt of energy felt so good he snaked his head down and threw in a couple crow hops. I started asking for small circles to regain his attention; he managed to grab the bit and buck again, harder this time. It was getting dark; my guys were still at the State Fair; I didn't have my cell phone on me; and I certainly didn't want Lance to re-injure himself. I made Lance walk nicely and behave himself for another minute or two, then got off and led him the short distance home. He plunged and bucked once while I was leading him, confirming my decision.

Most horses seem to calm down as a ride progresses; Lance has surprised me several times by starting out calmly and then ramping up well into a trail ride. He hasn't ever done that in an arena; too bored there, I think. But as I have determined to keep him out of the dry, shifty sand, we will just have to work through the yahoos!
Posted by Michelle at 10:29 AM 2 comments: 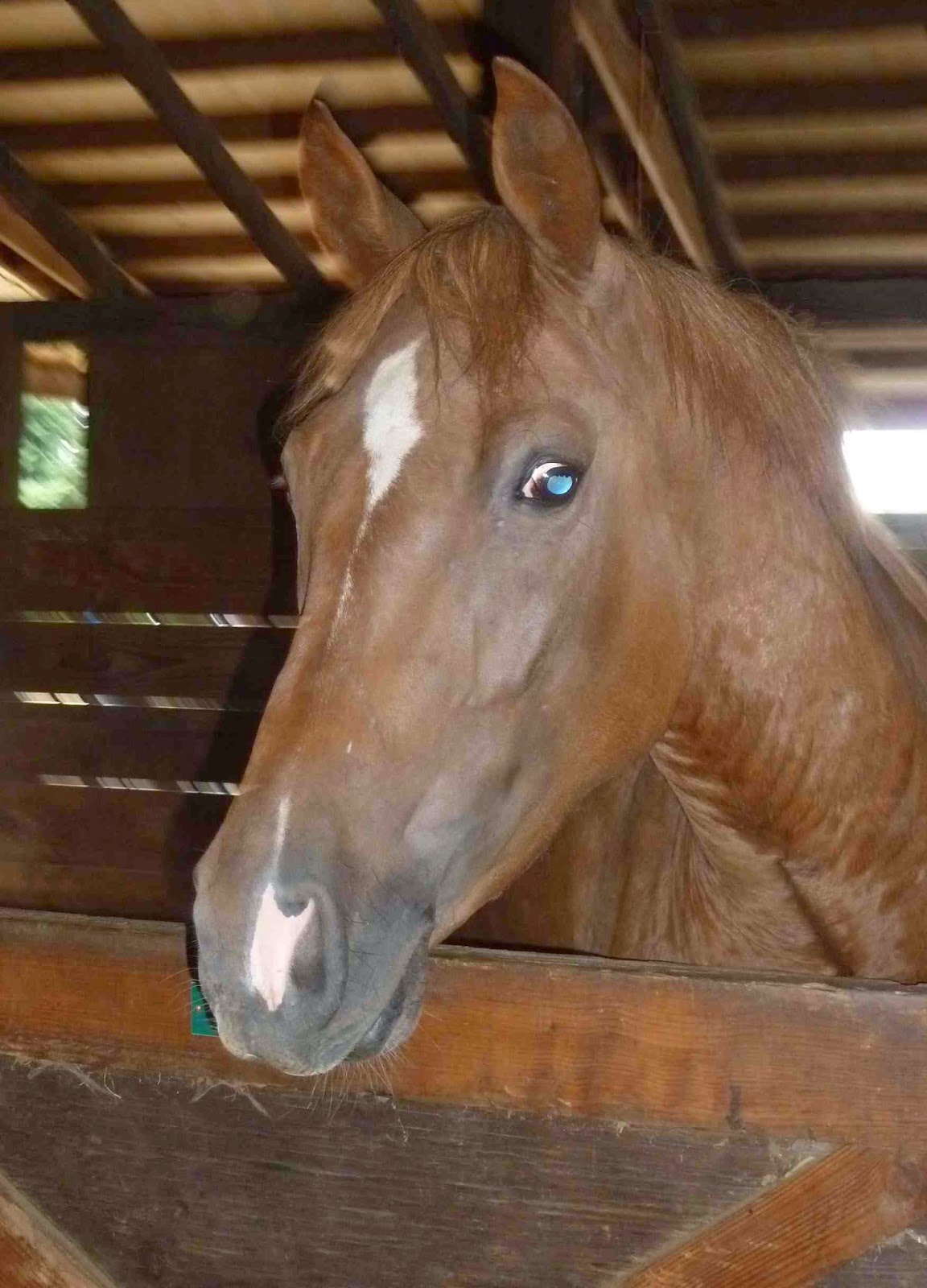 Lance really isn't scared in that photo; he's got his eye on a handful of hay I'd just grabbed. He already knew it was good stuff; he let himself out of his stall and grabbed the whole bale off the stack when my farrier was here Monday. I had lead Breezy out, so Houdini's stall door wasn't chained shut, just latched.  :-/

I've been hand-walking Lance for the last week, and considering how pent-up and squirrelly he's been in his stall, he's leading pretty well. None of the dramatic airs above the ground he demonstrated when I walked him at his old barn before bringing him here to live. He gets his final shockwave treatment tomorrow night. A week or so after that, Rick will ultrasound the injured ligaments to see how they look; I'm hoping he'll give me the green light to start riding a bit at the walk. We'll stick to riding out and about; schooling in our sand arena is OUT until it gets some rain to firm it up and stabilize it. I am convinced that riding in dry, shifty sand footing has been the main cause of Russell's and Lance's very similar, repeated ligament injuries. My vet husband poo-poos my idea, but Dr. Hilary Clayton has written about footing and I think supports my theory. We'll see!
Posted by Michelle at 7:48 PM 2 comments:

Lance got his second shockwave treatment today, standing quietly for it without any anesthesia. That's good news; it means the injury is healing and not tender.

Before this latest injury, I was planning to compete in a show this weekend. As hot as it is, I can't say that I'm heartbroken that we're not in the ring today. On top of that, life has been so busy with people priorities that I don't know how I would have managed to squeeze in dressage shows without slighting people who are important to me. I guess God knew where my priorities needed to be (of course He did); now I just pray that He will heal Lance's ligaments as good as new so we can at least enjoy the trails together.
Posted by Michelle at 3:23 PM 2 comments: