Finding jewels in the woods

Lance and I headed out for a ride through the woods this evening, but had to get by the mountain lions first. The two neighbor boys were hiding in the trees on their property across the lane from ours; when they decided to climb a tree, Lance went from high alert to high-tailing outta there! Our electric gate hadn't closed behind us yet, so he spun and bolted through it for the barn. I managed to get him stopped, then we turned to face the danger once again. We ended up riding back and forth by the tree several times (I got them to talk a little, which helped), and Lance even held it together when they jumped down again. I was proud of him!

Our ride on the lane through the wooded ravine was pleasant but uneventful at first. I was half watching for wildflowers even though it is too early, when there at our feet was my favorite, the wild iris: 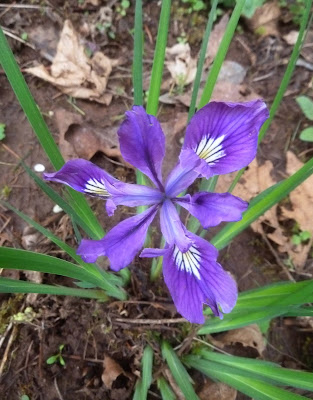 Then I spotted the first of several wild pink-flowering currants, 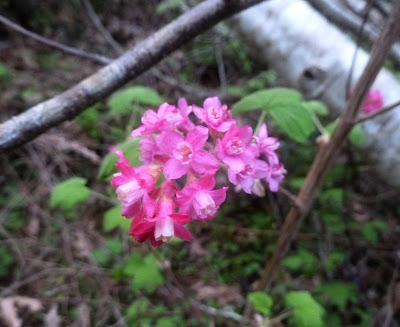 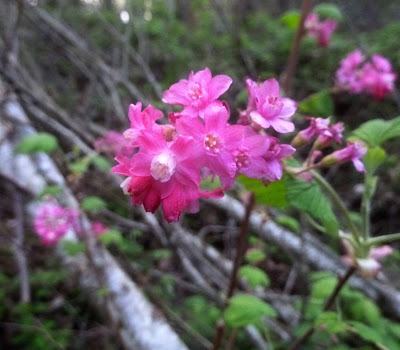 and a LOT of trillium down by the creek. I couldn't get close to the trillium because there wasn't safe access for Lance; I had to settle for low-light zoom shots. 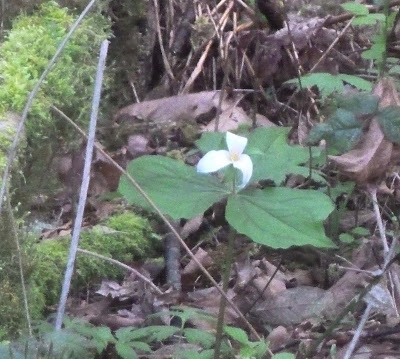 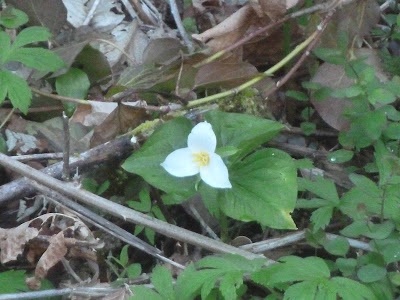 This morning I read the following quick snippet in an email from Jane Savoie:
I rode with Olympian Robert Dover for many years. One of Robert’s favorite sayings is, “Amateurs ride from movement to movement. Professionals ride from half halt to half halt.” I think those are words to live by.

This evening I squeezed in a quick ride, and remembered her words towards the end. So during our final trot work I worked on riding from half halt to half halt, and what a difference it made in Lance's frame and gait quality!

This evening I read the entire article, but for me, the "quick tip" had as much impact. It was the right message at the right time for the right result. Now to remember it!
Posted by Michelle at 10:48 PM 4 comments:

After several weeks of struggling to get our rides in, it got a bit easier last week and this. This week I also got Lance covered again. When SmartPak couldn't replace his ruined Ultimate Turnout Sheet because his size was out of stock, they offered to send us a Deluxe Turnout to use until the Ultimates are restocked. I'm happy to preserve Lance's mane and tail while minimizing necessary grooming; thanks for the great service, SmartPak! 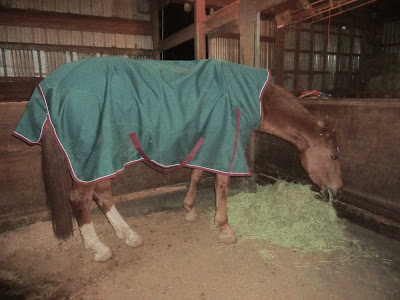 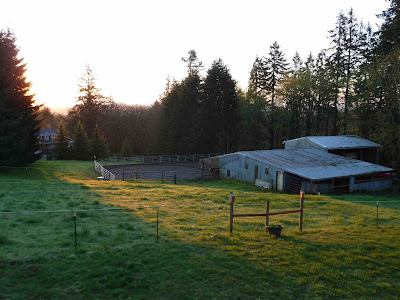 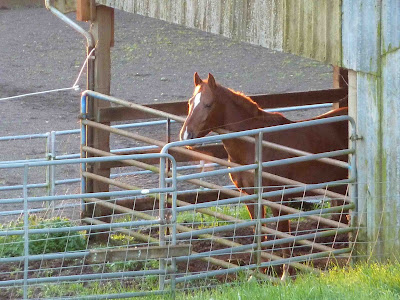 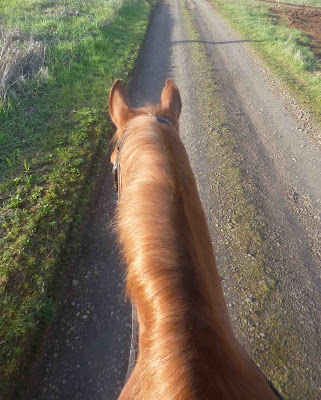 The sun came out this afternoon, so we went out, too!
Posted by Michelle at 10:17 PM 1 comment:

Still squeezing in our dancing practice

The weather has been mostly wet and life has been mostly hectic since the show, but we're still managing to keep the days off to a maximum of two in a row. Lance had Friday and Sunday off and it poured earlier today, but we finally got a dry spell this afternoon. I needed to pick up yesterday's mail and the arena is sloppy wet, so we went down our gravel lane for a change. Had a short but swell ride with some nice lateral work, a little trot, a little canter, and lots of transitions. It made me want to school longer, but "short and sweet" is good. Hopefully we'll have a chance to ride again tomorrow.

Lance has been naked since Tuesday after the show, when I found his lovely SmartPak Ultimate High Neck Turnout in Oliver's paddock, the lining ripped. :-(  It has a 10-year guarantee, but I hadn't planned on needing it so soon. SmartPak is out of Lance's size in this style until next season, but we are working out a way to keep his neck covered until then. Lance hasn't started rubbing out his mane again; I'm crossing fingers and toes that he doesn't. It's so nice to have it all grown in again and one tidy length! He's starting to rub his tail a little, but trimming his dock will take care of that if need be. So far, there's no "need;" for now it's just Lance and me, dancing even though no one is watching. ;-)
Posted by Michelle at 7:32 PM 2 comments:

A surprise and a show

After all the times I've had to back out of planned (and often already entered) shows in the last seven years due to lamenesses, I was a little gun-shy about entering Lance in an ODS League show last month. I have wondered if God was telling me to back off from competitive riding, and I didn't want to ignore all those warnings. So I prayed about it, waited awhile to send my entry, then moved gingerly forward, vigilantly watching for any signs of discomfort.

Two days before my show, my dad showed up. Rick cooked up the idea since my dad has never seen me compete these past 25 years of 'horsing around,' and they pulled off a complete surprise. Since I am a Boy Scout at heart ("Be Prepared") and that Friday had been one of THOSE days with my teenaged son, I can't say I was thrilled at first. But with Rick quickly jumping in to vacuum the spare room and make up the guest bed, and my dad's excitement over seeing me compete, I came around pretty quickly.

Bright and early Sunday morning, we headed out – me, Lance, and my dad. He wanted to see it all and help if possible, and gamely brushed out Lance's tail (he's not a horseman). Once I'd picked up my packet from the show office and we had Lance groomed and tacked up, I stepped into the trailer's tack room to get myself ready – and realized that I'd left my show bag at home. I can't remember ever forgetting an essential piece of equipment in 25 years of showing horses, and there I was without tall boots, helmet, or gloves. Rick and Brian had just arrived to watch me show and I sent them tearing home to get my bag, but as soon as they left I realized they couldn't possibly get back in time for my first test. I ran towards the show office, asking everyone I knew along the way if they had stuff I could borrow. While one acquaintance headed to her car to retrieve the field boots and schooling helmet she thought she had brought along, a stranger walked up to me. She had overheard my frantic queries, asked her daughter if she would mind lending her gear, then offered it to me. What an incredible, wonderful, overwhelming offer! Off we hustled to her trailer to get the gear, then off I hustled to get Lance bridled and into the warm-up arena.

Our short warm-up went well, but our first test did not. After a great entrance and halt (8), I had no horse! Perhaps facing that first trot lengthening across a bigger arena than he has seen since the State Fair last summer sent Lance into extreme energy-conservation mode; I don't know. What I do know is that I used all the tools in my toolbox, left the ring breathing harder than my horse, and still couldn't manage to keep Lance from c-r-a-w-l-i-n-g across the diagonal in his free walk and falling out of the canter several times. The judge gave us a score of 59.4% and several tactfully worded comments about Lance's lack of energy and impulsion. Since there were only two of us riding First Level Test 3, we got that pretty red ribbon. ;-)

I gave Lance a long break to relax and eat hay, then got ready for our second test, this time wearing my own boots, helmet and gloves. Our warm up was short and to the point – MOVE! As a result, First Level Test 2 was better. Lance still fell out of the canter once and was no powerhouse, but all our collective marks went up, we got a score of 62.5% . . . and won our class of five. That was icing on a very special cake for my dad; I'm so glad we pulled out a win while he was there.

Rick took a lot of photos; all but the one of us standing in the warm-up arena were under- or over-exposed. Below are a few I was able to salvage.