Eek; time flies, even as days crawl! Since my last post, I haven't been able to work with Stella as consistently as before, what with my son's graduation from high school and all that was involved with getting him across the finish line and on towards adulthood, plus a much wetter than usual June (after a much drier than usual winter and spring). I don't know if it's related, but twice now Stella has refused to be caught and spent the night out on pasture by herself with no water. Apparently playing the feral horse was more appealing than being near other horses or getting her evening hard feed (or being with me, obviously), even though me approaching her stall with her concentrates elicits the only vocalization I've hear from her, an almost inaudible low nicker. From now on, she only gets turn-out in the bottom pasture, because I can easily run her back into her paddock/stall from there. (I don't anticipate ever being able to turn her out with the geldings, as Oliver thinks he's still 'endowed' and acts all horny to the point of mounting mares in heat.) Anyway, as I said in an Instagram post, "It's a good thing she's so gorgeous, or watching her play 'Catch me if you can' would get old a WHOLE lot faster." 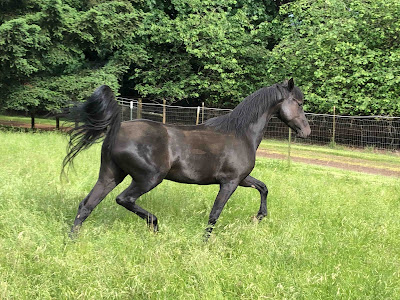 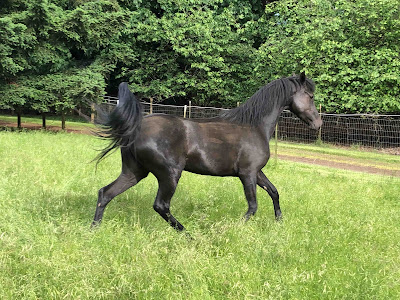 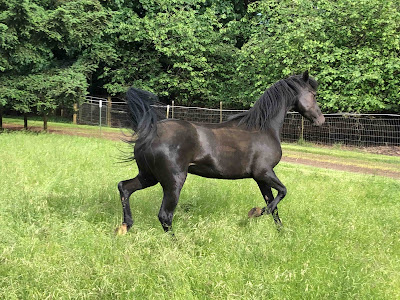 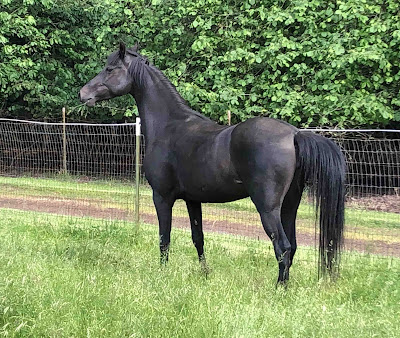 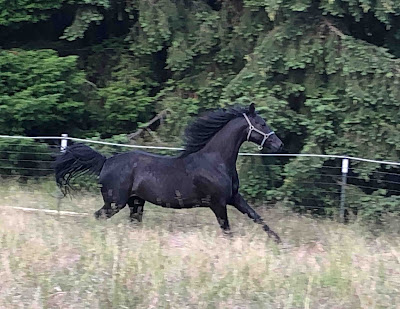 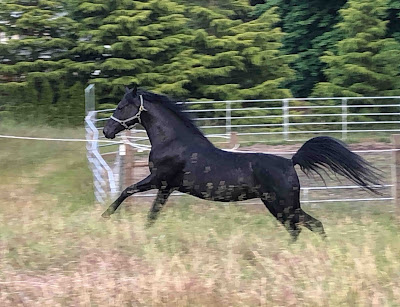 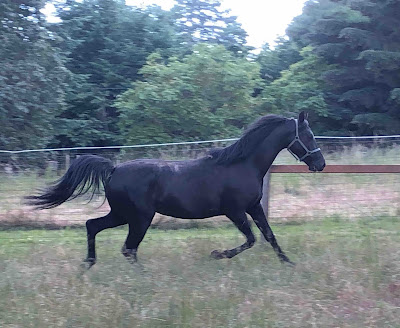 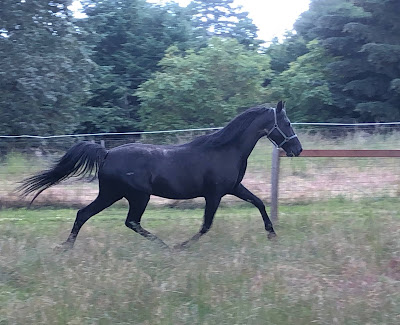 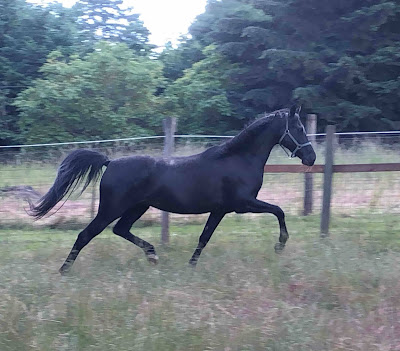 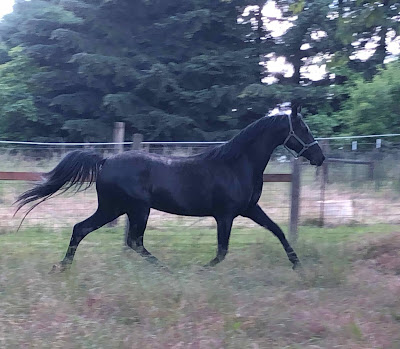 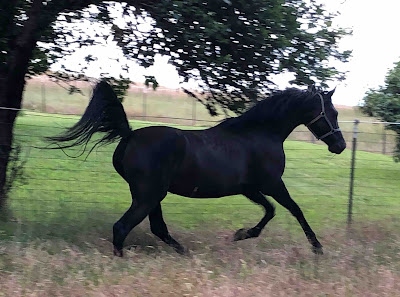 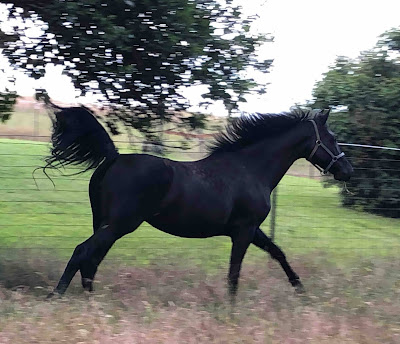 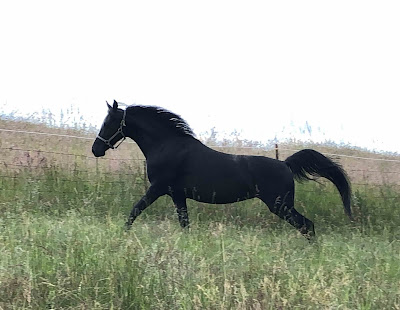 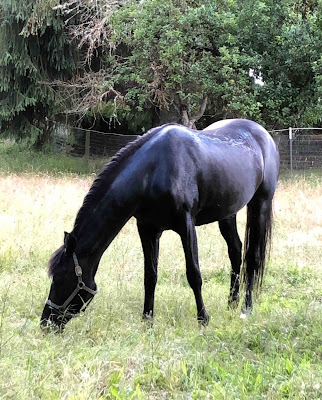 Lance actually got more rides last week than Stella got training sessions of any kind. But last weekend saw two more 'firsts' with Stella, so I want to document them here. 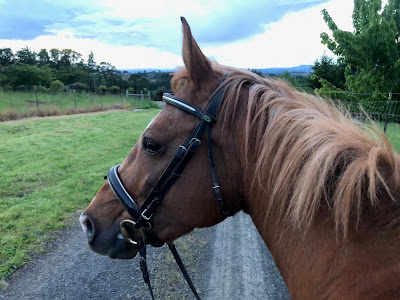 Saturday night Rick tuned into something I didn't want to see and hear on TV, so I went to the barn to do chores and decided I might as well do something with my mare. Having introduced her to lunging with a line connected to the bridle, I decided to forgo the line attached to her halter this time and she did really well! So I did it again on Sunday, removing the halter completely and taking some pretty working shots of my shiny 'black swan.' 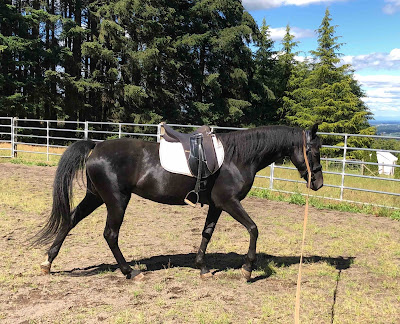 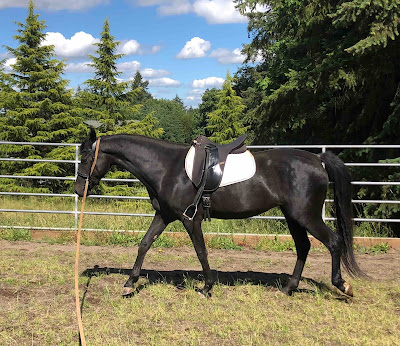 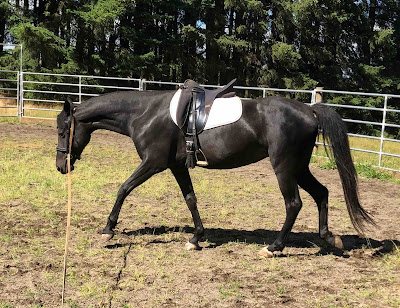 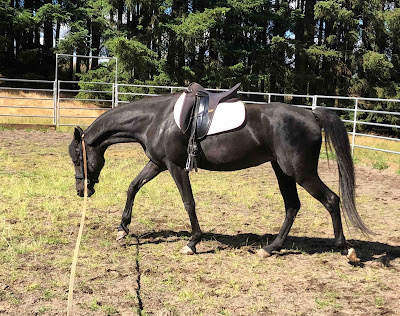 Then I took her back to her stall and mounted her from both sides while she stood quietly. 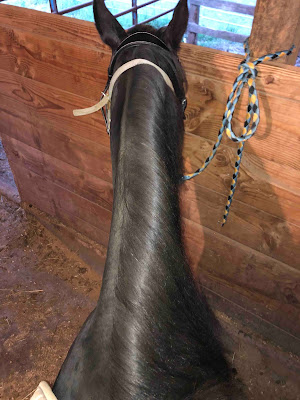 Funny thing about Stella in photos. She often looks much more substantial in them than she does in person. But she has gained some weight and muscle in six months, along with shedding out a lot of hair. Oooh; dapples! 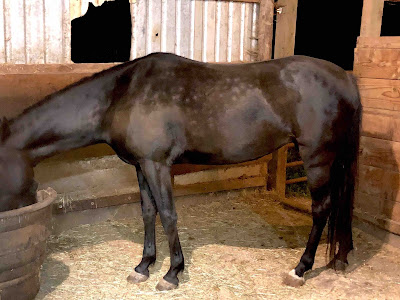 Working her under saddle feels tantalizingly close now. If I had a round pen and a couple sessions with Brian's assistance I think we'd be on our way, but since I don't have either of those we'll just keep going at our slow pace. We'll be dancing partners eventually!
Posted by Michelle at 8:59 PM 4 comments: