Well, it's been a week of trying different things. After Lance's breathing got so much worse weekend before last, I sent the internal medicine vet the following video and asked for ideas.

Kim called this a "pretty profound obstructive breathing pattern." She figuratively held my hand for the next several days while suggesting treatment and management changes. First, she encouraged the use of a hay steamer; which got Rick to finish it in short order so we could press it into service. 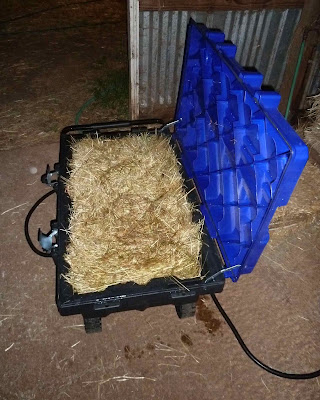 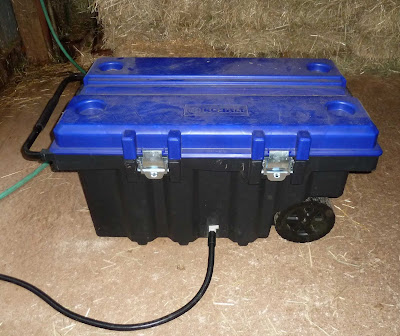 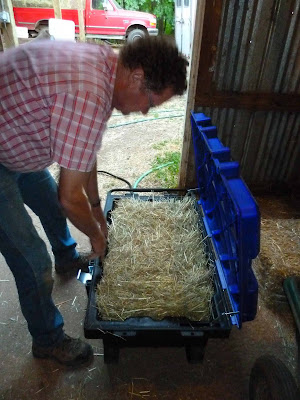 We tried albuterol inhaler treatments every six hours. After the first 24 hours, she directed me to increase the dose. I kept a record of his respirations just before and then 5/10/15 minutes after each treatment. There was a little improvement in respiration rate but not intensity, so we tried two nebulized dexamethasone treatments 12 hours apart. After those, Lance's respirations were maybe a little slower, but with a secondary push that he hasn't had for a number of weeks.

At that point, Kim approved going back to "just" prednisolone and Zyrtec twice daily, and encouraged me to put the horses out 24/7. I had kept them in their stalls/covered paddocks because the "pasture" is so dry and dusty, but Kim said mold is usually the culprit, not dust.

So our new daily routine includes administering meds, putting fly masks on/off, applying insect repellant in the ears, putting horses in/out for evening grain/supplements, steaming hay and transporting to the pasture. I haven't ridden, because Lance's lungs are working so hard just to get air for standing around – and now we're bracing for a record-setting wave. 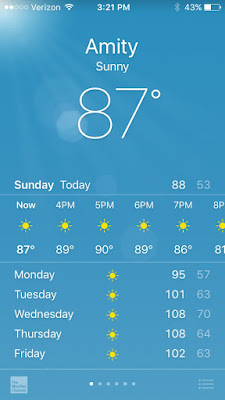 I am longing for fall, hoping that a change of seasons might reduce Lance's triggers.
Posted by Michelle at 11:24 PM 3 comments:

I am struggling to name the feelings constricting my heart this morning. Lance has been breathing faster/harder for at least the last 36 hours. Friday evening while he got his nebulized fluticasone, I decided we should walk down the lane to get our mail. We have to climb a short hill right after leaving our driveway and it was more than Lance could manage; he had to stop every few steps. Once the grade leveled out he didn't ask to stop, but his respirations were still hard – 47/minute. Granted, he was wearing a mask, but it was still alarming. He didn't breathe as hard last night, but when I did chores at 6:30 this morning, at the coolest time of the day, I noticed his nostrils were flaring. I timed his respirations – 36/minute.

I keep telling Rick that Lance's exercise tolerance has diminished since Cowboy Campmeeting, after we started using the nebulizer. He says the fluticasone wouldn't cause this, but I'm on the verge of mutiny because nothing else has changed in Lance's daily regimen. Obviously even the shortest of easy trail rides is out when he is breathing so hard just standing in his stall when it's cool.

Rick is doing what he can; I know he is at a loss about what more we can do as well. And he will have NO bandwidth to deal with this today; he was called to the coast on an emergency last night and didn't get home until 4:15 a.m. – and had to leave again at 7:15 because the horse was getting worse. (He hasn't been very busy during the week and his emergency load is usually very light; this is unusual.)

I know we can't safely drop the prednisolone cold turkey, but I'm tempted to pull Lance off all the meds and see what his baseline is. If he gets far worse, then at least I'll know that all these chemicals we're pouring into him each day are doing some good. If they are, at what cost to his overall health? (I know the cost in term of dollars, and it's more than nominal.) Still, Lance is my big, beautiful goober who nickers at me and is engaged with the world. I can't see putting him down because his breathing problems aren't responding well to treatment. Like some other areas in my life, this seems to be an unsolvable conundrum. The emotional burden is great. 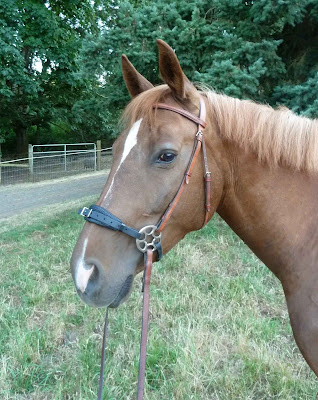 On motivation and perspective

Sorry it's been so long since I've posted! I've thrown out occasional tidbits on Instagram (see blue button at right) while going through the many necessary motions and riding a bit of an emotional roller coaster, exacerbated by not enough sleep. But things feel a little saner at the moment, so it's time to sit down and share.

First of all, we had a great time at Cowboy Campmeeting. We got the best campsite we've ever had – close to the provided horse water and the meeting tent, and shaded by firs we could use for high-lining. 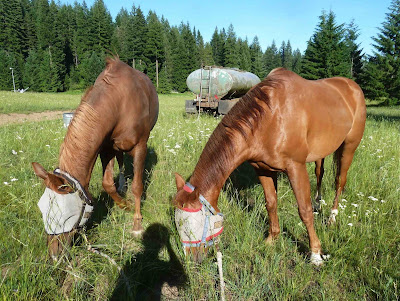 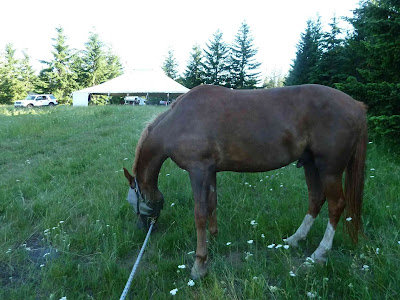 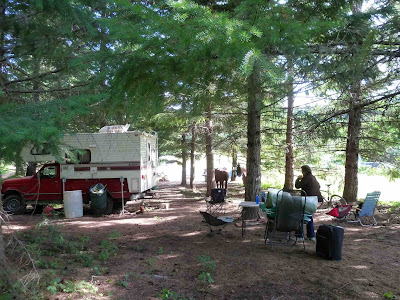 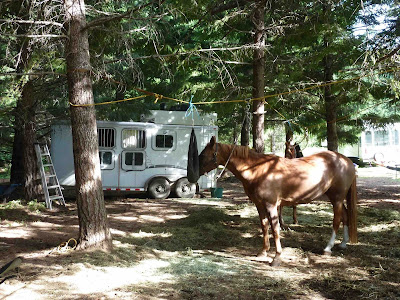 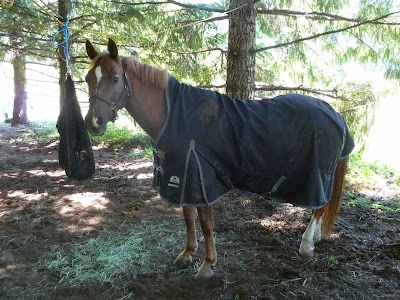 We didn't get an electric-fence paddock set up this year, so we took the horses out to graze on the lush grass as often as possible; it helped offset the rich alfalfa hay they weren't used to (the only certified weed-free hay we could find). I felt bad that Lance couldn't lay down and rest, but not enough to give him a longer lead. Every year at least one horse gets hung up on its lead while high-lined, ending up with a severe rope burn and likely strained and sore body parts from the struggle; it happened to someone again this year. Nope; not worth it!

Lance and I went on wonderful trail rides every day, thanks to Rick joining us twice, and friends riding Ollie the other two days. One of those days was the organized competitive trail ride! I was afraid that might be beyond Lance's capacity this year and was prepared to sit it out, but after Rick and I rode most of the route we decided it was do-able. And to my great surprise (since I was thrilled just to be able to participate), Lance took Reserve High Point Horse and I got Reserve High Point Adult!

After we got back home from Cowboy Campmeeting, a couple things we had ordered arrived. First, Rick bought this fancy new nebulizer with which to treat Lance. But things were too hectic to start using it right away, between unpacking and cleaning up from our trip and all of us working at Rick's clinic while his secretary was on vacation. And once we did start using it, it took FAR longer to administer each treatment than we were lead to believe it would – and I had to do that twice a day for a week. 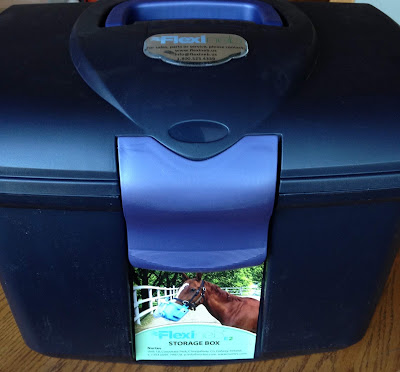 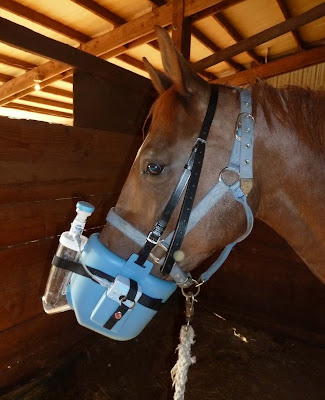 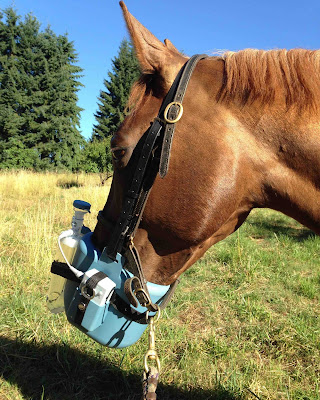 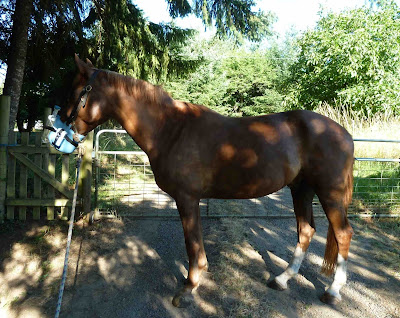 The two big advantages to this system is a better-fitting mask and a battery pack, so I can walk Lance during his treatment. That helps get the medicine further into his lungs where he needs it most. Unfortunately, he hasn't wanted to move much, and has been coughing a lot more when I do make him walk. He's had the same problems on the few short road rides we've taken, too. I really think Lance was doing better before adding the nebulized fluticasone to his treatment regimen.  :-(  Needless to say, that's discouraging, and robs me of the motivation to ride. (It doesn't help that our "riding world" is shrinking, either, what with the too-dry arena, hard gravel roads, and overgrown trails). The other thing I had ordered couldn't even pique my interest at first: 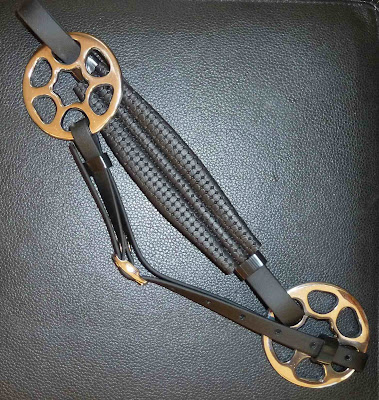 I got this on eBay from Germany. I did quite a bit of research and this style seems to address all the concerns and shortcomings I've seen in other bitless bridles. This type is even used in dressage and jumping competitions in Europe! Besides my lack of time, energy, and motivation, the German-language instructions had me stymied. But after the last of the twice-daily nebulizer treatments (YAY, just once a day now!), I sat down with my laptop and used an online translator to figure out how to set it up with headstall and reins. The next day I tried it out for a short ride, and it worked fine – as in nearly indistinguishable from our usual bridle (I took photos but they have disappeared into the ether, apparently).

Last Thursday evening our local dressage chapter had a get-together. In the course of conversation I learned that  one friend's horse had surgery for a compressed spinal cord and ended up with Sweeney shoulder; my instructor's promising filly (a Totilas offspring) had surgery for kissing spine; and her mother's schoolmaster isn't sound enough at this point to make the trailer ride to where they are moving in North Carolina. It was humbling to hear of these much bigger problems, and reminded me to be thankful that I can still enjoy some saddle time with my mustang, even if it isn't competitive or strenuous work. 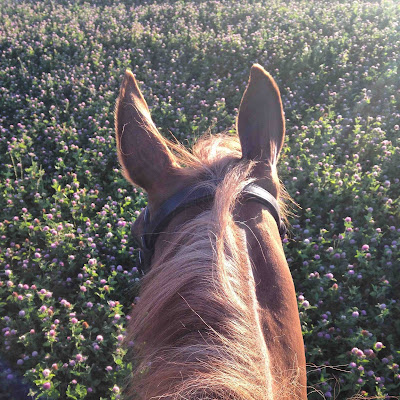