Catch as catch can

Between the weather (mostly very wet, plus a good dose of snow), travel (gone six days), and the holidays, December has completely trashed my consistency in the saddle. Just getting the horses turned out for short periods of exercise regularly has been a challenge. So my focus this month has been on maintaining relationship and trust, not advancing Stella's dressage training. I tried to document our rides with at least one snapshot, and succeeded with  most of them.
December 2: a ride down the road through the ravine and up to the valley viewpoint, the first time Stella's gone to that point: 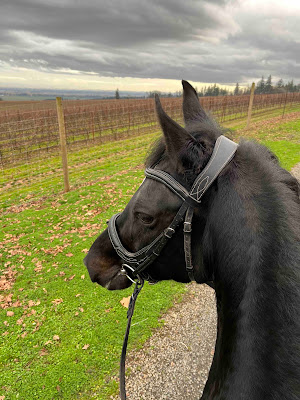 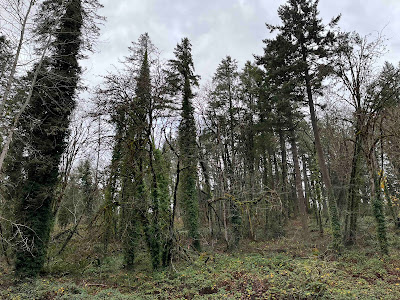 Squeezed in another ride December 3 before our trip: 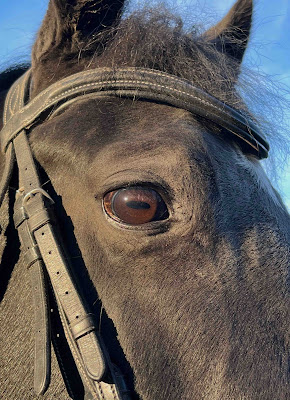 December 10, the day after our return. Considering that she was confined for a week, Stella was very, very good. She didn't even act that pent up during turn-out before our ride! 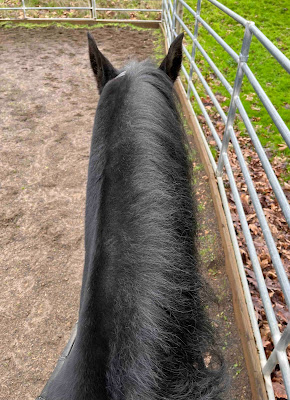 December 17. It rained a LOT; this may have been my next opportunity to ride. She was on her toes, so we didn't actually leave the property. 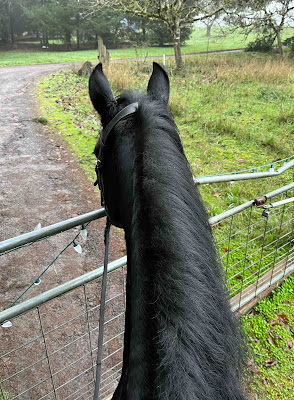 I schooled a pent-up mare in the arena December 21, and promised her that our next ride would be out of the sandbox. The next day was blustery, but true to my word, after our walking warm-up in the arena 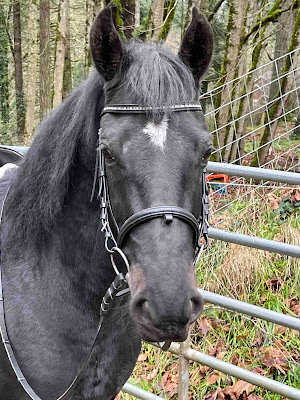 we headed up the lane. It was trash pick-up day, and three of the neighbors' big trash bins' lids had blown open, trash bags within billowing and lids swinging and banging. Stella was as tense and alarmed as I've ever seen her, but once she stood and stared, she was willing to skitter by them. I was SO proud of her for being biddable in the face of such terrifying apparitions! 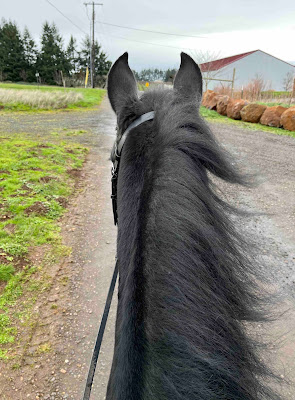 By the time we got to the mailboxes it had started to rain, so we turned around to face the stiff wind driving raindrops in our faces (and Stella's mouth foam onto her neck and chest) and headed home. 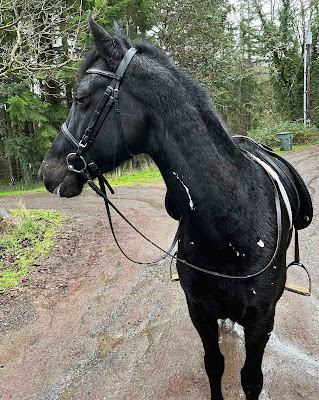 You might notice that she's wearing a different bridle on this ride. In my ongoing effort to figure out why Stella gets so face-fussy, I wondered if her ergonomic bridle was bothering her somehow. So I switched to the very first bridle I purchased for her, after punching some new holes to make it fit better (same bit). I'm not sure it addresses the fussiness, but it is easier to put on and take off, so it has been Stella's regular bridle since.
On Christmas Eve day, I decided to open the arena gate and give the horses a few minutes' access to the winter grass as a Christmas treat. After I took these photos, Stella took off and raced around the pasture; Lance kept his head down and ATE until I dragged him away for fear of founder given his metabolic syndrome. 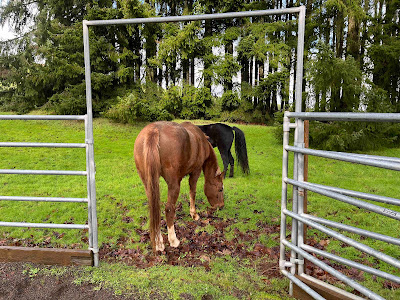 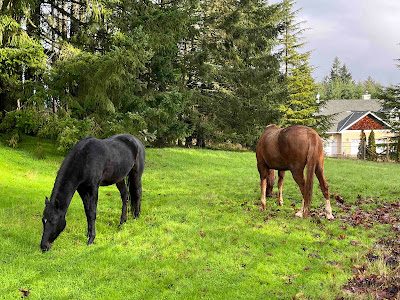 Then Stella and I schooled in the arena for a bit. 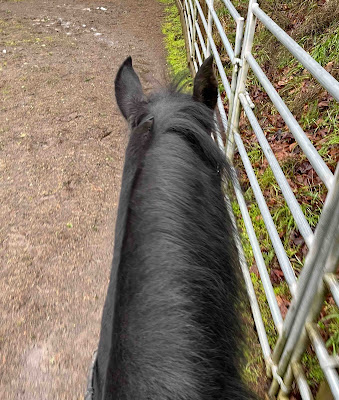 On Christmas morning we awoke to a slight dusting of snow, but the next day we got a winter wonderland of white! 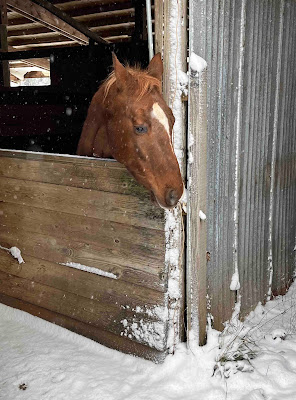 I turned the horses out, and they were both frisky, even Lance. Listen to him snort! 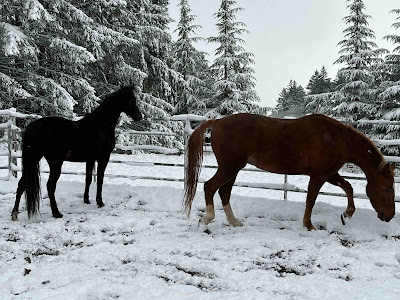 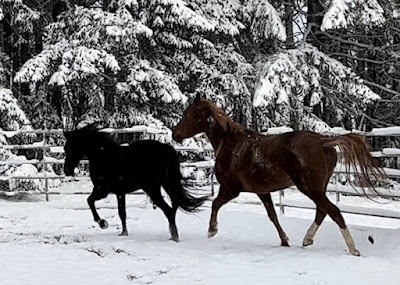 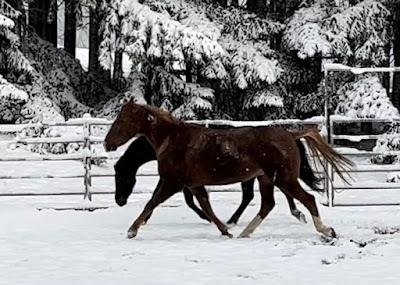 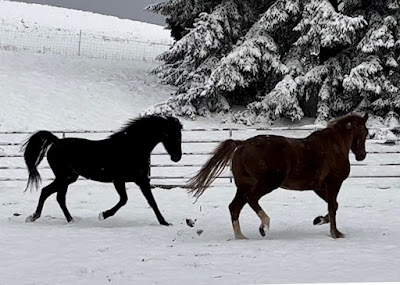 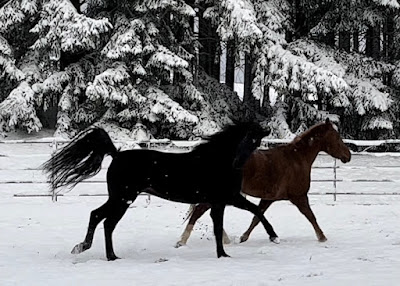 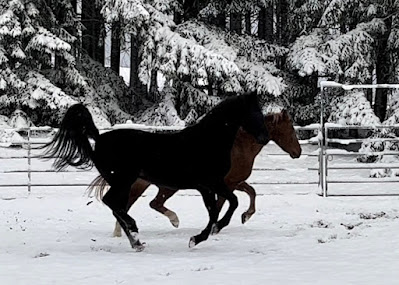 As I caught them to take them back to the barn, it started snowing again: 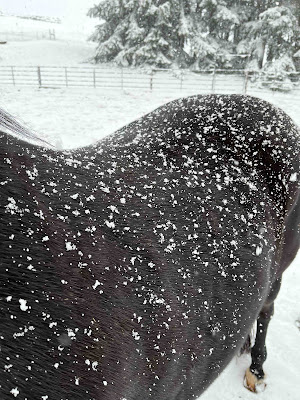 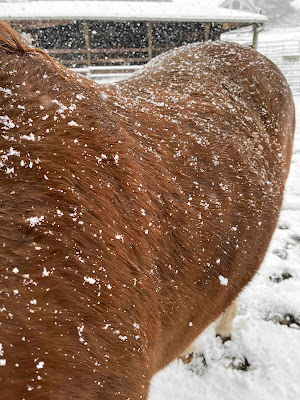 I couldn't resist the opportunity to take some beauty shots of my pretty girl: 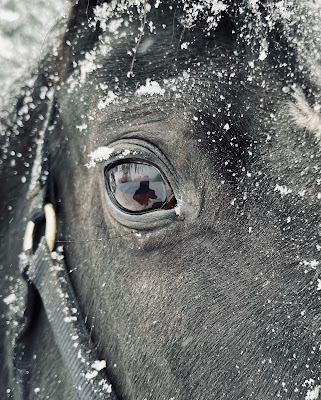 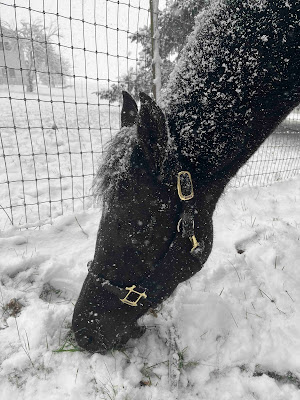 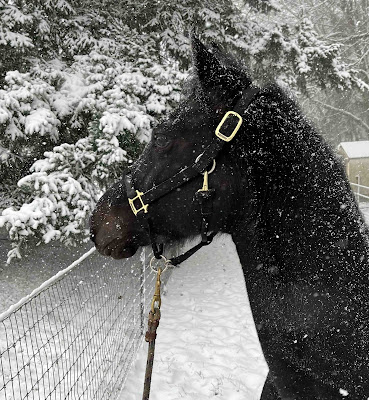 And when the snow shower abated, I couldn't resist a short ride in the snow! 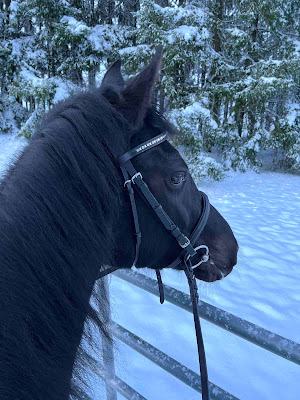 December 27 was another beautiful snowy day, another snowy turn-out, and another short ride.. 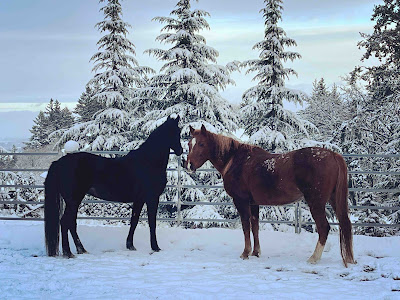 Tomorrow is New Year's Day, when, come hell or high water, I spend some time on the back of a horse. I thought it would be nice to spend time on the back of BOTH horses, and since today was dry, we did a trial run. Lance just got a loose-rein walk around the arena; then I had a short but lovely school on Stella. 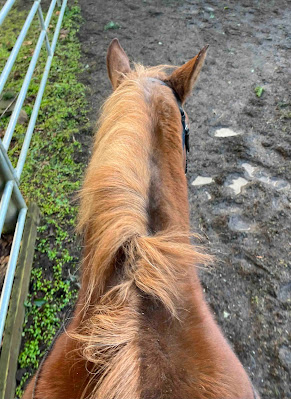 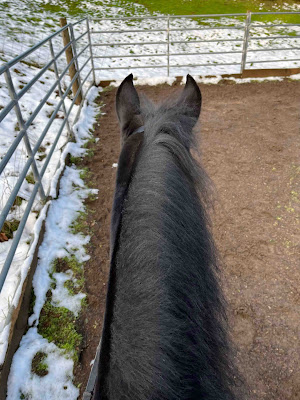 I made a couple end-of-the-year purchases. One is this CoolMax stable sheet for Stella. It's a bit big on her (it was the smallest one left on clearance), but I think it will work. (It's teal, not blue.) 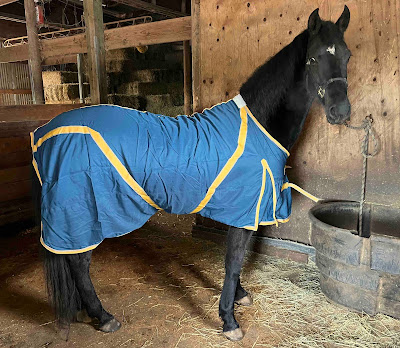 After talking to a friend who has used it successfully, I also broke down and bought some SmartCalm Ultra Pellets to try on Stella. She's only been on it two days so it may totally be my imagination, but Stella already seems calmer. The horses didn't get turn-out yesterday, and I rode Lance first. Normally Stella would have jumped around in her paddock with pent-up energy, but she just watched us walk around, and then was quite good when I rode her. Time will tell; the product comes with a 60-day money-back guarantee, so there is no risk to trying it.
Happy New Year, everyone!
Posted by Michelle at 10:49 PM 5 comments: