This morning Brian (I was inside, he was outside) opened the front door and called, "Lance is out." We  had put the horses on the NW corner of our property so they could eat down the last bit of tall forage, and I don't think the electric tape is 'hot.' Apparently the grass is greener next to the woodshed; this is what I saw when I went out through the front door: 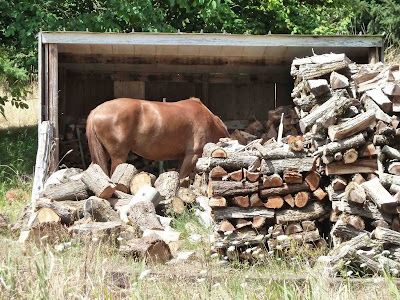 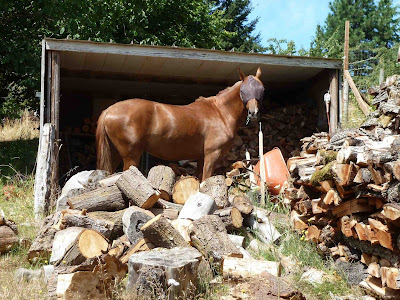 Good thing he's not spooky or reactive, because there isn't a lot of open space where he was standing! 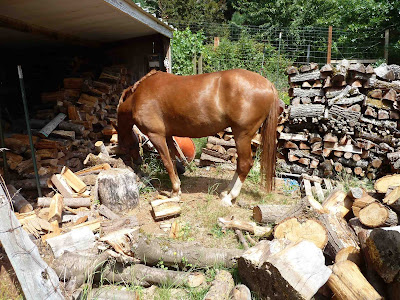 I grabbed his fly mask and he stepped carefully through and over the firewood as I led him back to join his herdmates in the pasture (on the far side of the woodshed).

Before long, Brian repeated his earlier alert. This time I found Lance under the walnut tree: 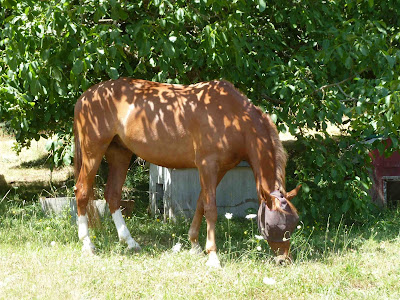 At this point I said 'uncle' and we led all four horses to the secure lower pasture.

I am so glad that the horse camp we are headed to this weekend has permanent pole corrals at each campsite. I don't know that we could keep Lance contained within a small enclosure powered only with a battery-operated fence charger, or on a high-line!
Posted by Michelle at 2:48 PM 2 comments:

Trust me, I SEE all the flaws in my riding in these videos; I could sit beside you as you watch these and solidly critique them myself. Such is the challenge of learning to dance together in a way that seems effortless in its beauty, and doing it without a lot of outside help. We aren't there yet – but boy, do I love my young partner!

I am so happy with my boy! A totally new environment, only his second show, and Lance handled it like an old pro. Oh, he "looked" at a few things here and there, but then accepted each of them and moved on. What a good mind he has.

Lance was a looker himself, all done up in braids for the first time, but I didn't get any photos. When you are a one-woman crew, you can only do so much, you know? I did pay to have our rides recorded, and the videos are uploading to YouTube as I type; I'll post them in my next entry. I didn't do a great job of riding him (I was being so careful not to let him curl behind the vertical that I didn't take enough contact!), but we had no errors and scored solidly – 65.6% and 64.6%. If I had done a better job of riding him I'm sure those scores would have been several points higher. Still, the judge's opening comment on our first test was "Fluid, forward-thinking test!" – one of the best comments I've ever received. :-)

August is hot on our heels, and we have a lot planned. Next weekend we plan to go horse-camping – a new adventure for Lance. In fact, yesterday after I got home from the show, I unloaded, unhitched, and we loaded our camper on the truck! The following week I hope to get another lesson from Julie in order to work on the various weaknesses pointed out by the judge. August 12 is set aside for a beach ride if it works out for the three of us who want to go – another new adventure for Lance. And at the end of August I plan to show Lance at the State Fair, which means we need to work on some things so we don't embarrass ourselves in Halter and Trail. YeeHaw!
Posted by Michelle at 2:19 PM 6 comments:

When I am an old horsewoman

When I am an old horsewoman
My horse shall wear fine leather and turquoise,
And I a straw hat which doesn’t suit me.
And I shall spend my social security on oats and carrots,
And sit in my pasture watching my horse graze and roll
And ride him across the sunlit meadow
If my old bones will allow.
And when people come to call, I will smile and nod
As I walk past the gardens to the barn
To show the flower growing in a stall fresh-lined with straw.
And I will be an embarrassment to all
Who have not yet found the peace
In being free to have a horse as a best friend;
A friend who waits at midnight hour
With nuzzle and nicker and patient eyes
For the kind of woman I will be when I am old.
I will sneak out in the middle of a summer night,
I will shovel and sweat and wear hay in my hair
When I am an old horsewoman.


—inspired by Patty Barnhart's version; thanks to Jane Savoie for sharing
Posted by Michelle at 7:33 AM 2 comments: 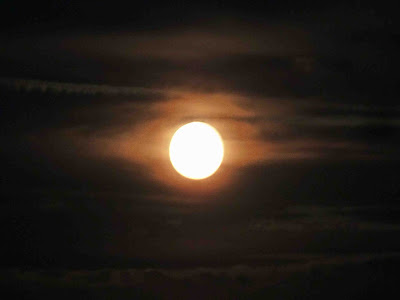 So, Lance and I were on a roll after three great lessons with Julie. At our last lesson, two weeks ago today, we finished by reviewing the two Training Level tests we will be doing at the show this Sunday. Since then, I've worked on test elements during our rides, although trying hard not to drill them. (Lance picked up "halt at X" way too quickly!)

Last week I was headed to the beach on Tuesday, and to Spokane for four days on Wednesday. Not wanting to miss any more preparation than absolutely necessary, I got up EARLY both Tuesday and Wednesday mornings to ride.

This week has been hot, and I haven't been able to ride in the mornings. Sunday's ride was okay; last night's (as in late – after dark) ride was fairly miserable. So this evening, I stopped thinking at all about the show and the tests, and just focused on exercises to improve connection and gaits and responsiveness. We leg-yielded down the wall as well as quarterline-to-wall; we did a lot of trot-halt-trot transitions; I made sure to keep him properly bent around my inside leg while keeping my hands 'giving' and on their own sides of his neck. Big improvement!

So for the rest the week, we'll do more of the same, and on Sunday, we'll go in and do our two tests as best we can. I'll try to get photos or video!
Posted by Michelle at 11:37 PM 2 comments:

From whence cometh this energy?

This morning when I turned the horses out, Lance and Oliver were turbo-charged!

I haven't ever seen Lance play this much. He's turned out every day, so it wasn't pent-up energy, and it was a warm morning, so it wasn't frosty-frisky energy. Could it possibly be that our more focused dressage schooling is building muscle, and this was fit-and-feeling-fine energy?

The proof was in today's lesson. Because of Rick's schedule, I wasn't able to take a lesson until 4:00 this afternoon – when the temperature was in the low 90s. While the lesson arena is covered and there was some air movement, the footing had just been watered so it was quite humid inside. I didn't know if Lance would have any "go" at all.

Julie and I were both pleasantly surprised! Lance worked very well, with good energy. We went through both the tests I will be riding in two and a half weeks, and developed a plan of action for his trouble spots (maintaining a consistent right bend, and the right lead canter depart). Julie remarked several times how much he's improved since our first lesson with her less than two weeks ago. Yay Lance!
Posted by Michelle at 9:42 PM 4 comments:

The other day I looked out the window and saw this: 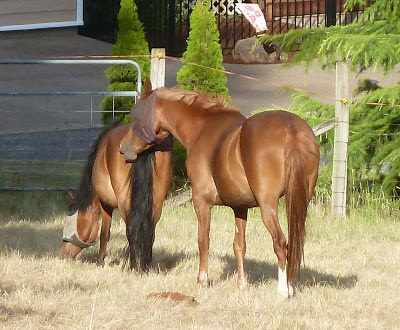 My innocent young boy seemed to be falling for an older woman! Breezy didn't give him the time of day, though, so eventually he lost interest.

Oliver has always claimed Breezy as his "woman," so I was a little surprised that he wasn't taking issue with Lance's attention. Later, though, I saw Ollie romancing Breezy. When she ignored him as well, Ollie started little strafing runs around her, galloping and bucking, stopping to see if she noticed, and then ripping off again. It was hilarious!

In another observation of herd dynamics, I saw Lance harassing Rick's old cutting horse Sammy today. A friend who visited over the weekend mentioned seeing one horse herding one of the others round and round; I'm afraid what I saw today wasn't new. I suppose we may have to do something to keep the old guy safe.

Schooling has been going well as I work on the instruction we got from Julie. I'm hauling over for one more lesson this week, then we're on our own until after the show.
Posted by Michelle at 11:25 PM No comments:

My guy in action

I had a second lesson with Julie this morning. When I decided to get my spurs before beginning, I asked Julie if she wanted to ride Lance around to see what he feels like. Video opp! (She tried to shoot some video while I was riding, but didn't know how to work my camera so only managed to capture two- and four-second clips.)

I am so pleased with how my guy looks here! He's just warming up, but is solid and steady for a green youngster. Oh, we still have lots to work on before his Training Level debut, most notably our trot-canter and canter-trot transitions and the stretchy trot circle, but he is responding so nicely that I know we'll make good progress.
Posted by Michelle at 1:59 PM 7 comments:

Thank goodness for the coastal breeze!

It's gotten HOT! I thought about getting up early yesterday morning to get a ride in during the coolest part of the day, but didn't figure Lance would appreciate working before breakfast. So I rode last evening. Thankfully, we usually get a stiff coast breeze most summer evenings; which brings the temperatures inside and out back down to a reasonable level. The wind makes for dusty rides, but also keeps flies and mosquitoes (and heat) from annoying us; I'll take the wind!

Before riding him last night and again this morning, we worked on trailer loading. (I conveniently left the trailer hitched, since we have another lesson tomorrow.) Lance doesn't load like I like my horses to load, which is to say I open the trailer door, throw the lead rope over his back, point him at the opening and let him load himself. So I'm using patience, food, and corrective backing if he takes even one backwards step. Most often, he just plants himself at the back of the trailer; if I wait him out (the patience part), he eventually gives up and walks on. But there may come a time when loading quickly is of the essence, so we must get past the balkiness.

This morning I cut Lance's mane before turning him out for the day. I think his new haircut gives him a cute, preppy look – which is totally at odds with his dweeby, center-part, "Alfalfa" forelock! 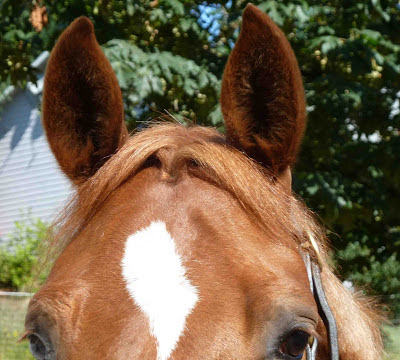 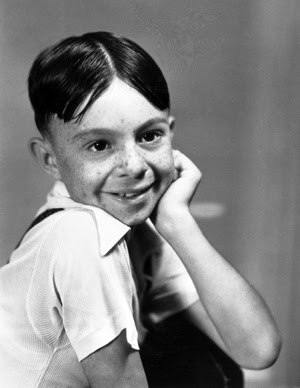 I love my "little rascal"! (Some of my readers are waaay too young to get the reference! heh)
Posted by Michelle at 11:34 AM 4 comments: