Hey there; it's been awhile. Christmas has come and gone; we've had good weather and not-so-good weather, but no BAD weather. I've been taking photos to share and exercising Lance regularly, but his lack of energy affects my motivation to post. And then New Year's Day happened....

If you've followed my blogs over the years, you know I have one cherished New Year's Day tradition. If I'm not out of town, I've got to spend some time on horseback. You know: "Begin as you mean to go on." Well, on New Year's Eve I got a text from a my best riding buddy asking if I was going to ride as is my custom, and before you could recite "Paul Revere's Ride," I had agreed to haul over to her place the next day so we could ride in the New Year together.

She has an arena with some obstacles, a long sloping gravel access drive up to the neighbor's, and some paths mowed into an adjacent empty lot. We tootled around utilizing all of the above, enjoying the beautiful day, good conversation, and our equine partners. 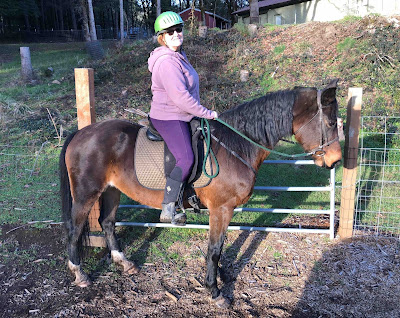 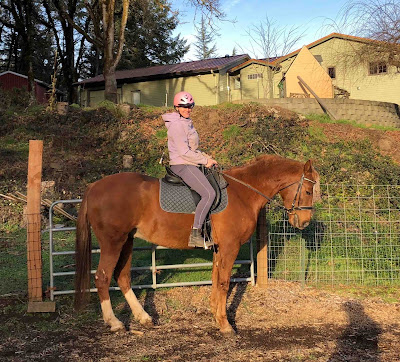 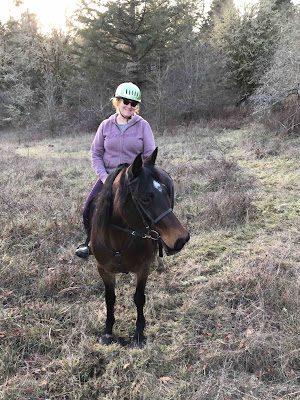 We came off the empty lot (shown in the last photo) and turned to head up the access drive one last time. Lance and I were in the lead – and then Kate's riderless horse passed us. I whipped my head around to see Kate lying on the gravel. By the time I jumped off Lance and hurried to her, she was sitting up but obviously in discomfort, slowly rubbing her left leg. I asked her if that was what hurt, and she whispered, "No, I think I broke my clavicle and a rib. I'm going to need the electric cart." So I ran down the driveway with Lance in tow to retrieve Kate's husband and the cart, threw Lance in my trailer, and Tim and I gingerly transported Kate down to the house and their car. Off they went to the local hospital, while I caught and cooled off Kate's mare, untacked both horses, and headed home. As the evening unfolded I learned, from a series of texts from Tim, that Kate had broken her clavicle and all 12 ribs on her right side, had two compression fractures in her spine, and punctured a lung. She was transferred to OHSU, the regional teaching hospital, because of pulmonary risk . . . and was finally released on January 9.

To add insult injury to injury, on the 11th I learned that my long-time clinician/instructor and superb horsewoman Suzan Davis Atkinson had been bucked off the Monday before and has a broken humerus! 😳