Me and my girl


Lisa took this video of me riding Stella during our lesson today. We did a lot of other things, and still have a lot of things to work on to make a solid partner, much less a dressage competitor, out of my black beauty. But being able to do this is so, so satisfying. 😊 I just wanted to share this little tidbit to tide you over until I have time to put together a full lesson report with videos. 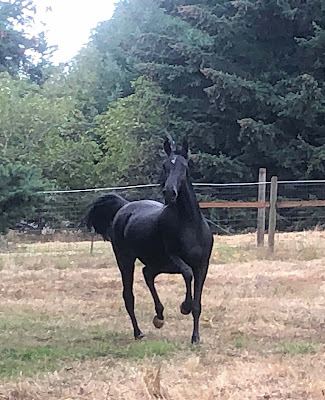 Today, nine months to the day after Rick vet-checked this nearly feral beauty for me, Stella and I went on our first solo ride. Granted, it was only across the width of my arena, our only tack a rope halter, but it was calm and uneventful, just the way good horse training should be. So pardon me, now that she's out nibbling emerging grass shoots and I'm back inside, while I yell "WOOOHOOO!!!" 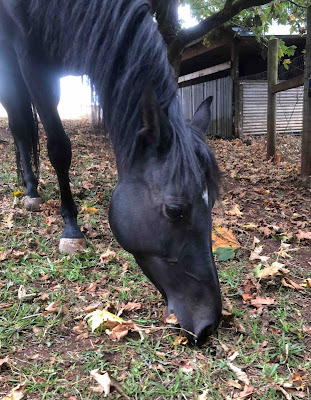 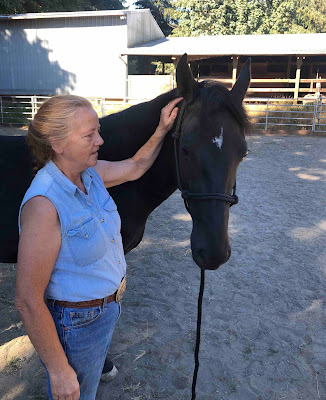 Stella and I had our fourth lesson with Lisa (above) the day after my last post, and then took two weeks off because of the horribly smokey air from the wildfires that started on Labor Day and shortly after. I continued to do little bits of homework with Stella, but not a lot; even though she had to be out in it, I did not. But I started to get a little stir crazy so we started working together more and went ahead with a lesson on the 16th; you can see the dingy yellow haze that cast a pall on everything (below). But it sure was fun watching "Lisa the apple dispenser" work with Stella on accepting the tarp! (Walking on it was no big deal; picking it up and putting it against and ON her was something else altogether.) I love the end of that video. 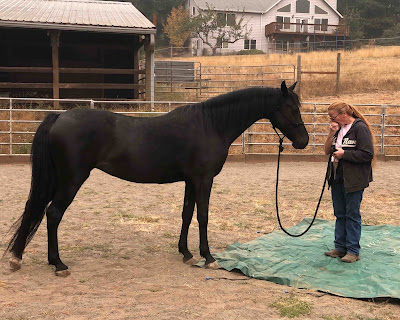 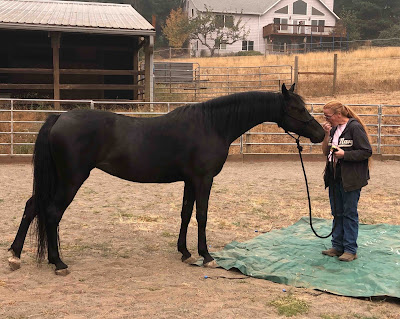 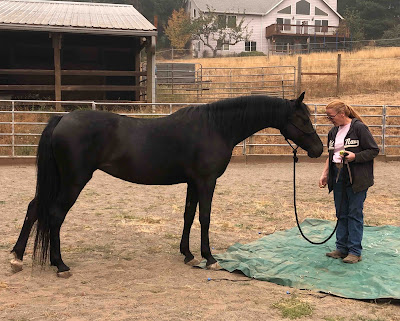 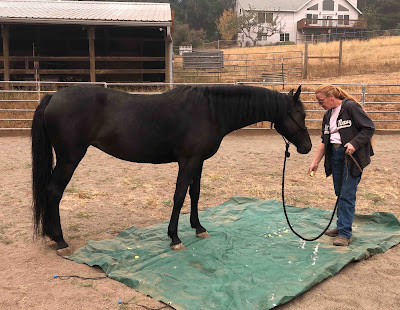 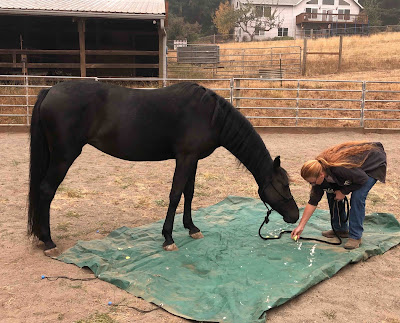 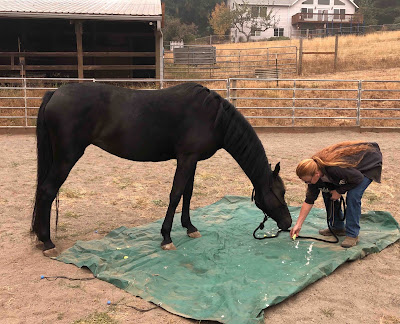 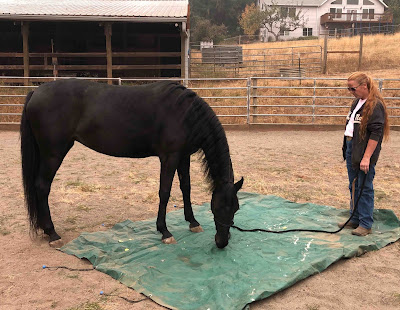 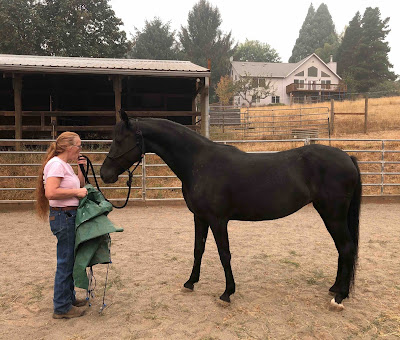 Lisa said at the end of that lesson that she thought Stella was about ready to do circles with me on her, since she is fine with me sitting on her as part of our fence work (my views from her back, below). Given how very quick she is and how reactive she is when things fall off her, I didn't think so! We are talking about hauling Stella somewhere to take a long-lining lesson with Suzan Davis Atkinson, since she really seems happy to be ground-driven and I've seen Suzan do some amazing training that way. 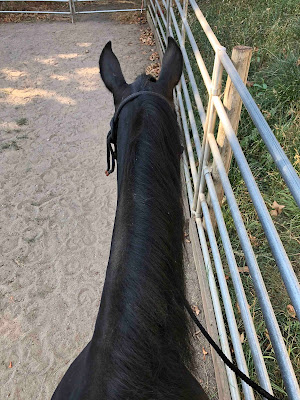 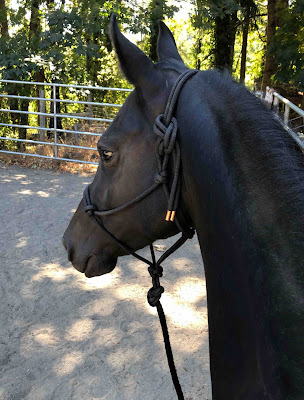 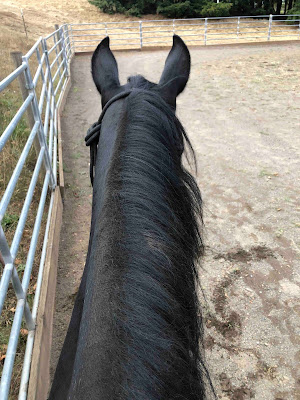 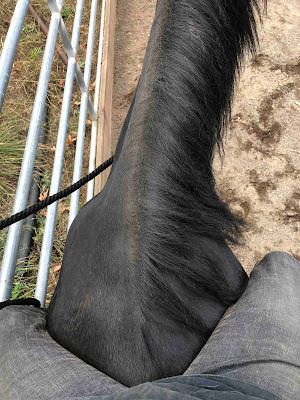 On the night of the 17th we had a glorious hours-long thunderstorm with abundant rain that scrubbed everything clean again and quelled the dust in the arena. Stella and I went back to work in earnest, adding trailer loading practice to our homework. Loading her up to bring her home at the end of December was only her second time in a trailer, and I haven't loaded her since. Taking a cue from Lisa's tarp work, I used apples as a reward, and she's been great. 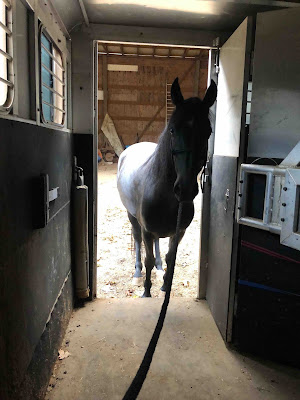 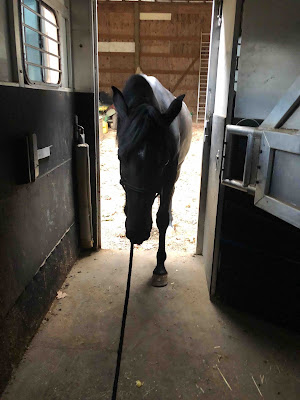 We also kept working on her reactivity to things on and falling off her. Now if she's standing still, no reaction. If she's moving, she still reacts. 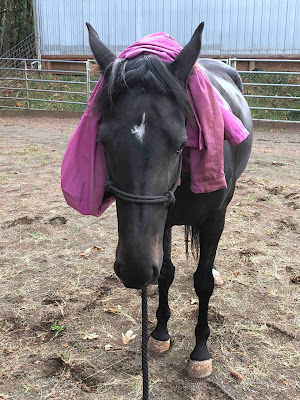 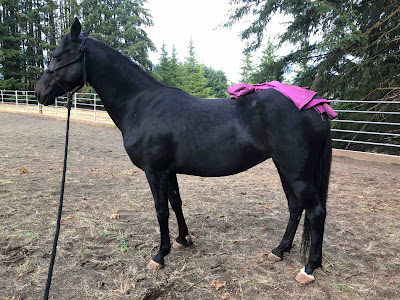 Lisa had asked me if I had a surcingle so I borrowed one and we introduced it in this week's lesson. Putting it on was no big deal since Stella's been saddled a lot; learning to work from a line run through one of its rings took some adjustment. The benefits were quickly apparent, though. 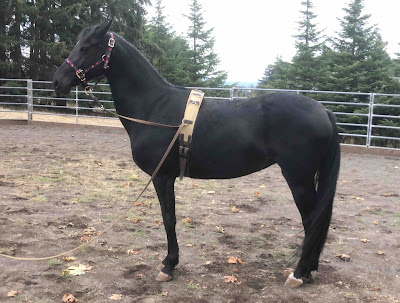 Then Lisa pulled the line out of the ring. Oops; omething else to work on!


After that we moved on to fence work, and Lisa suggested we ask her to move. Lo and behold, I got to RIDE my mare; so exciting!


Lisa explained how I can continue this mounted work at home alone. I didn't have time today to try it because of work and a dog agility class, but hope to tomorrow. The progress we've made in just six lessons plus homework is exciting!

Meanwhile, Lance watches all this from his paddock and makes it clear he's frustrated about being left out. He's had two shockwave treatments (out of three) so far, on 9/2 and 9/21, and is no longer lame. Twice now he's escaped from his stall while Rick cleaned his paddock (Brian knew better than to leave Lance's door ajar – and now Rick does, too). The first time to my alarm he took off bucking but didn't seem worse for his shenanigans; the second time he was much more sedate – I think he had used up all his excess energy. I was amazed and thankful that he didn't seem to suffer during that period of terrible air quality.

While Lance is mending, Stella is modeling!

Since she arrived, Stella's halter has been the hand-me-down from my first Morgan as that was the only web halter we had that fit her. She has pulled back a few times while tied, and the last time the ring that the lead rope attaches to gave way. I looked into replacement rings but ultimately decided that it would be better to replace the whole thing since it was nearly 30 years old. In the meantime, I used this 'giant' blue one with black trim for tying, 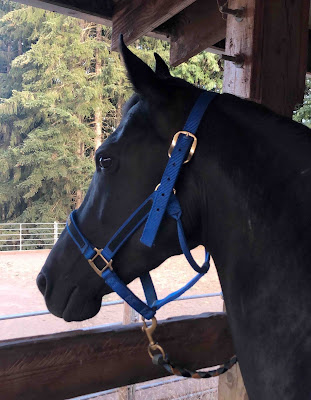 and this white/red/blue rope halter that Lance won in an online mustang show for her groundwork. (It's too small for Lance.) 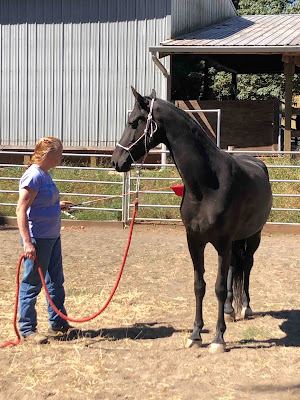 I had gotten a sale email from Chicks Discount Saddlery advertising halters, so I checked out what they had. Lisa prefers a rope halter with integrated lead rope (no snap) for groundwork; so I looked at those, as well as web halters.

Even though bright blue is striking on Stella, I couldn't resist this black one with bright flowers when I saw it. Unfortunately, it's a bit too big as well; I should have ordered the "small horse" size instead of the "medium horse" for her fine head. But it would probably cost twice as much in shipping to exchange it than the halter's price, so I'm keeping it. 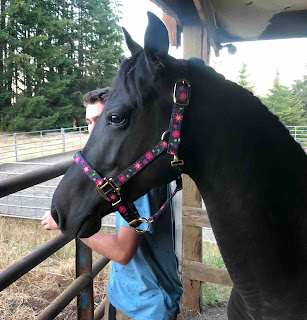 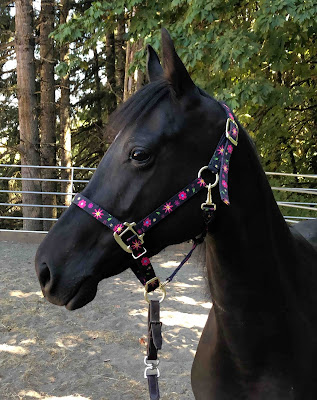 I also got a black rope halter; it is made of nice thick, soft rope and has a 10' integrated lead, perfect for our ground work. 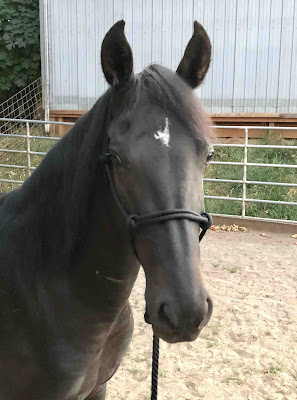 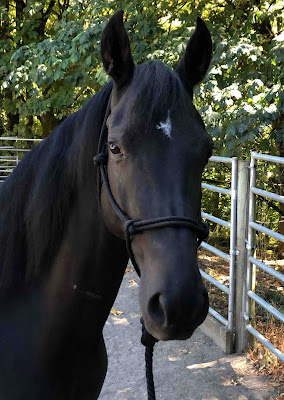 And our ground work is going very well! At our second lesson Lisa told me to saddle her up for our homework sessions. Although Stella was still good, the saddle created some tension, which Lisa noticed at our lesson last week. After some initial work, we decided to take the saddle off for the rest of the lesson. She still seemed more 'stuck' than the week before, but Lisa ended with some work from the fence that was a big improvement over what I had been able to do. After seeing Lisa demonstrate how you can use the fence in training with her young mustang the day before,  I was excited to build on this. 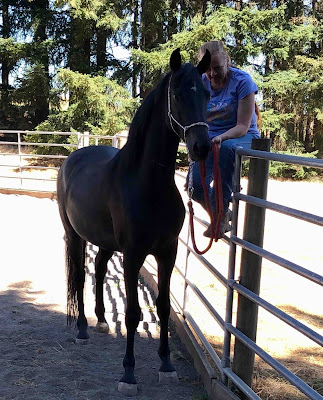 Today, after doing our homework for a week (sans saddle for now), I was able to slide onto Stella's bare back from the fence. She has a very comfortable back. 😊

I can't wait to see what we do tomorrow!

Below are links to the three videos I shot during last week's lesson.