Lots of irons in the fire, but no photos

Well; it's been quite a week already, and it's just Wednesday night!

On Sunday, one of Brian's schoolmates hauled in with her two mounts for a get-acquainted lesson/session. She has been without a trainer since dropping 4H, and was excited about the possibility of taking lessons from me and entering our dressage chapter's show at the end of February. She brought both her cute little Welsh pony (she's quite petite herself) and her green Paint mare, and rode both of them. I sent her home with some things to work on and my old all-purpose Wintec saddle since all she has is a jumping saddle; her mom is planning to bring her up for lessons every Sunday possible between now and the show.

When they left, I was eager to get on Lance to "practice what I preached." That's the beauty of teaching anything; it confirms the knowledge in the teacher. But my eagerness faded when I didn't get any enthusiasm from Lance. He wasn't grumpy or resistant, just lazy it seemed. We schooled, but I wondered if we had any business trying to do two tests at our show. (Last year he was agonizingly lazy in the first test; I had to get pretty forceful with him in order to get through the second test without him petering out.) Last week, he was very rattly and congested during one ride, and became nostril-flaring, side-heaving out of breath after just a little walk and trot work. He wasn't breathing like that on Sunday, but the incident was in the back of my mind.

Monday I took him for a ride down the lane through the woods, thinking he might perk up with a change of venue. He didn't.

Lance had Tuesday off; I picked up some rice bran pellets to add some fat calories to the horses'  rations. (They both approved of the addition.)

Today we had a noon lesson scheduled with Julie. She noticed immediately that he had lost a lot of muscle in the three months since she had last seen him. I had noticed that as well, even though I've been giving him extra hay and he is getting regular exercise. After watching him move a little, she felt strongly that we shouldn't continue, and advised me to hold off sending in my show entry form. Lance had NO gas in his tank, and seemed quite subdued. We talked it over, and with her encouragement I loaded him back up, called Rick, and drove Lance straight to the clinic. Rick listened to Lance's heart and lungs (normal), put the hoof testers on his front feet (no soreness), tested him for hind-end weakness and ataxia (none noted), collected a stool sample for a fecal, and drew blood for a large-animal profile and possible testing for Cushings disease. By that time he was acting more like his busy self; I took him home.

While I was at the clinic, Rick asked if I was available to ride a horse later. He has taken ownership of a client's horse to try and find him a good home rather than putting him down, and wanted me to evaluate him. So later this afternoon I met Rick at the stable where Larry is boarded, and got in a ride after all!

Larry is a 22-year-old warmblood who has been shown to Prix St. George; he is out of condition, has Cushings disease and an old injury. But he's a sweet old gentleman, and after we got acquainted while warming up, he was actually a joy to ride! (The experience made me realize just how little response I've been getting out of Lance; I sure hope the blood work tells us something definitive.) The stable where Larry is boarded is willing to give him room and board in exchange for using him as long as Rick will cover his medical expenses, so I will probably go over and ride him again. Who knows; maybe he has another PSG test in him! I just need one more score for my silver medal.... ;-)
Posted by Michelle at 11:27 PM 2 comments:

Two rides in the bank

I did get Lance out for a ride in our snow-covered arena on Sunday. Yesterday I decided we'd have better footing on our thawing gravel lane, so we schooled there and cooled out in a snowy field. 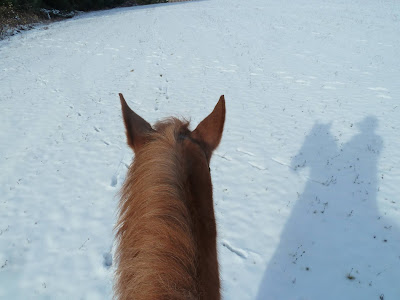 I'm not sure what opportunities we'll have the rest of this week; the temperature is going up but the rain is coming down.

Our ODS chapter's league show is coming up at the end of February; I need to pull out my test booklet to see what we're ready for and ride with those tests in mind. I also want to schedule a couple lessons with Julie to utilize her eyes on the ground.

Looks like I'll be the eyes on the ground for someone else soon if we can work it out. A schoolmate of Brian's is interested in taking dressage lessons and entering our show; we're going to try to meet up for the first time this Sunday. I'm looking forward to it!
Posted by Michelle at 11:09 PM No comments: 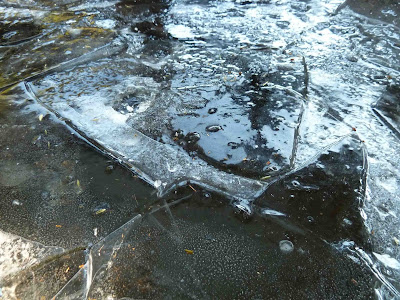 I really need to bite the ice cube and get Lance out for a ride today. He needs a better outlet for his energy than figuring out a way to reach his extension cord!
Posted by Michelle at 12:53 PM No comments: 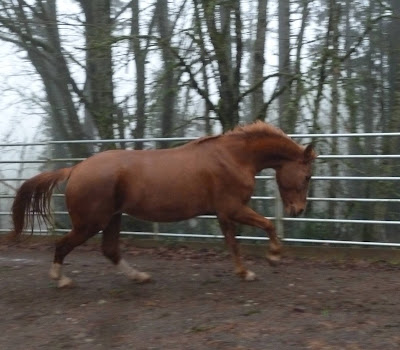 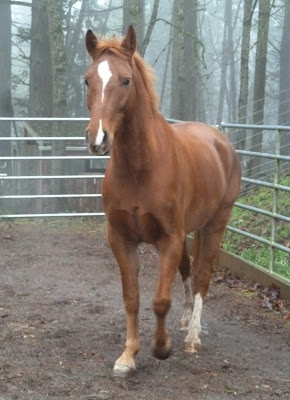 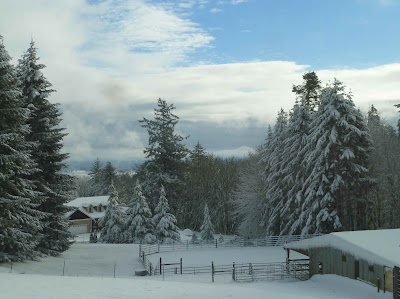 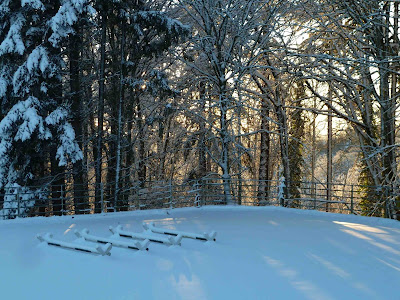 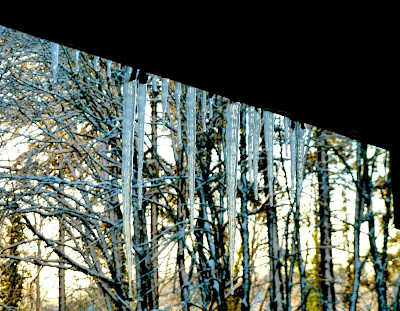 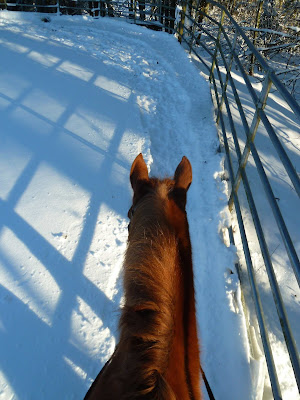 I've only gotten in two rides this week – but at least I've gotten in two rides this week! I didn't work Tuesday, so took advantage of the calm weather to work on our dance moves with Lance. That night it snowed, a LOT. I wanted to take Lance for a ride in the white stuff Wednesday, but we ended up busy as a family and I ran out of daylight. No worries; all that snow was still around to ride in today. ;-)
Posted by Michelle at 11:30 PM No comments: 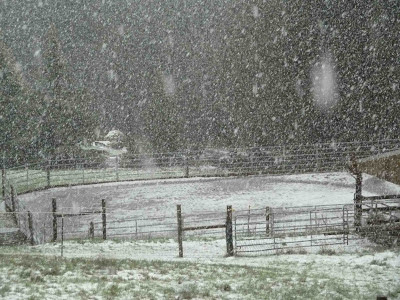 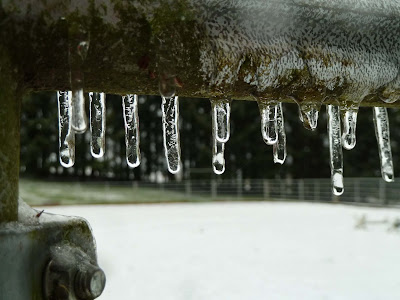 A pretty good start, if I do say so myself! 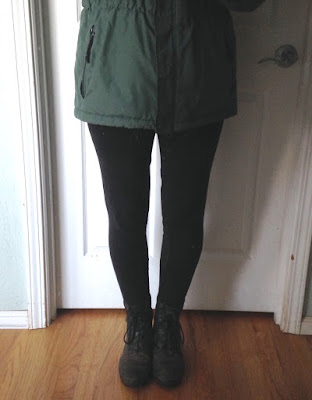 After posting Wednesday that it was too cold to ride, I decided to "just do it." The outside temperature had gotten up to 30°, although by the time I got dressed in my wool knee socks, double-layer winter breeches, turtleneck, Polarfleece pullover, ski jacket, fleece headband, and winter paddock boots, the temperature had started to fall again. It was a good thing I made myself go to the barn, too, because Lance's water was frozen over. My mouthy mustang had managed to unplug his stock tank heater. :-/ 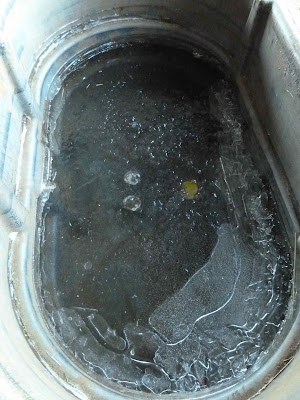 When we went to the arena for a careful warm-up walk, I decided to try for a selfie – and Mr. Mouth continued his antics. 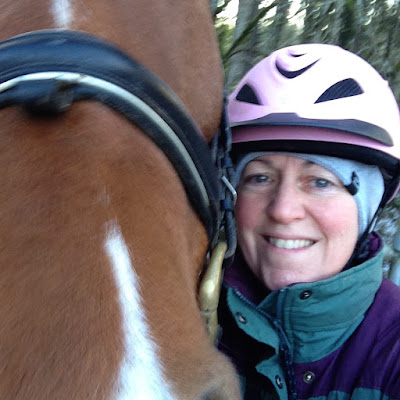 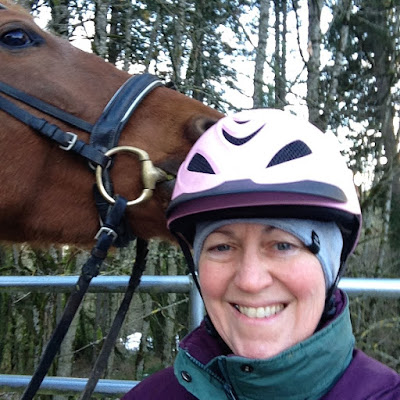 We then rode through the neighbors' to the gravel lane in the woods, largely protected from the biting wind. As always, I felt much better for getting out and riding than I would have if I'd stayed inside trying to stay warm, even though my face, hands, and thighs were pretty numb by the time we were done.

Today started out even colder, but without any wind. I managed to shoehorn in a short ride between cooking and cleaning this morning and picking up Brian this afternoon. That worked out well because vacuuming always warms me up, and once out, the sun actually had some warmth, too. I was comfortable without the turtleneck and just a windbreaker over my Polarfleece.

That makes three rides for the first week of the new year, in spite of the frigid weather and frozen footing, so yay, us!
Posted by Michelle at 11:08 PM 3 comments: 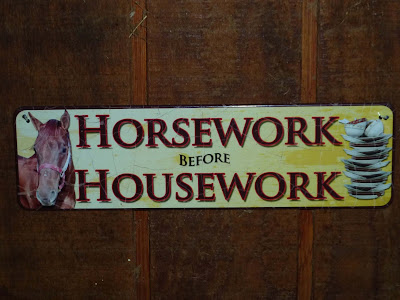 I've mounted this Christmas gift from friend Kate on the outside wall of our tack room. Unfortunately, it's so bitterly cold right now that the only horsework I'm doing is chores!
Posted by Michelle at 1:05 PM 1 comment:

Starting as I mean to go on 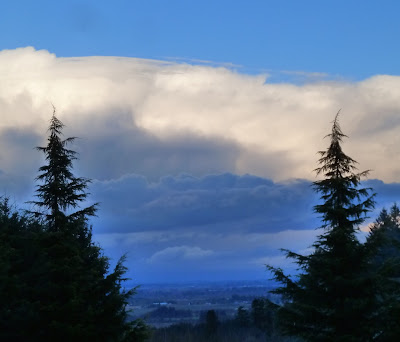 Lance and I brought the new year in right – together, on a ride. We warmed up in the arena, where I took the above photo, then went through the neighbor's to the lane in the woods as the clouds turned golden from the setting sun. It was quiet, save for Lance's hoofbeats, the babbling brook, and a distant hooting owl. Lance was a little owly himself at first; it's been awhile since we've ridden that way and he was looking for the deer we flushed from next to the arena. But he eventually settled without incident – also a good precedent for the year.  ;-)