It's been three months since Russell's wreck with the tree, so we celebrated by adding a wee bit of jogging and lateral work (at the walk) to our daily 15-minute ride. Adding in some variety was nice!
Posted by Michelle at 8:36 PM 2 comments: 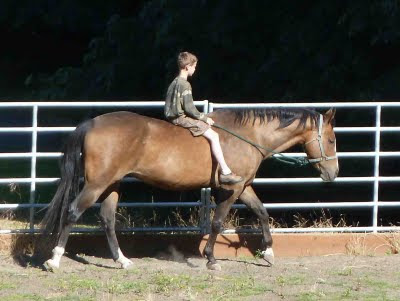 It's been a busy few days here with my MIL visiting and cherry/raspberry harvest in full swing. I was busy and Brian was "bored" Friday, so I sent him down to give Russell his daily walk. Brian wasn't happy about it, but Russell was his usual upstanding self!
Posted by Michelle at 4:49 PM 2 comments:

Today I talked to the Morgan's owner. She is no longer interested in a trade, as she would like to reduce her total number of horses (she has two old horses and a herd of miniature horses besides Ritz) rather than maintaining the number. She would consider selling Ritz, but her price is more than I can afford and probably more than the current market would bear.

So I proceeded with Plan B. I called a woman who I think would appreciate Russell and give him a wonderful home for the rest of his life. She owned the stable where Russell was boarded most of his life before I got him, and helped Russell's owner train and show him in OHSET (Oregon High School Equestrian Team). She is now a grandma with an old equine partner who isn't really sound but is safe for her and her baby granddaughter to putz around on. Russell is ten years her horse's junior, more sound, and every bit as safe; a match made in heaven? She seemed pleasantly surprised by my call and offer, and will get back to me after some consideration.

Being poised to rehome Russell with no future dressage partner in sight gives me a sick feeling in the pit of my stomach. I don't want to be horseless; the other three equines here aren't mine, or what I want to work with. And when Brian heard that Russell may be leaving, he actually cried; that didn't help. He's like his dad; he may not USE something, but he can't bear to part with it. I had hoped that Russell might become Brian's mount, but Brian doesn't choose to ride more than once or twice a year. I'm of a mind that horses should be used for optimum mental and physical health. They take considerable resources to keep as well, an investment we can't make lightly. 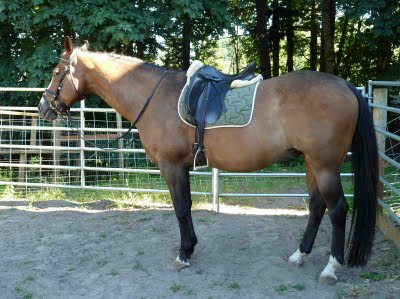 As long as I have him, Russell and I will continue our daily walks. When I have time I tack him up, as I think a rider's weight is more comfortably distributed by a well-fitted saddle than concentrated on two human seat bones.
Posted by Michelle at 6:56 PM 4 comments:

Easy to take it easy

Russell is cleared for 15 minutes of walking a day, but no work. So the easiest way to give him his daily constitutional is to put a halter on him, throw a saddle blanket over his back (cuts down on laundry), and walk around the arena. I don't even tie the lead rope into a loop; there's no need with this upstanding citizen. 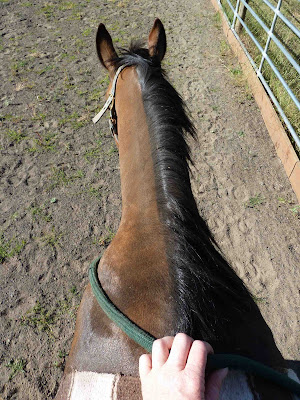 His reward? Some green grass! 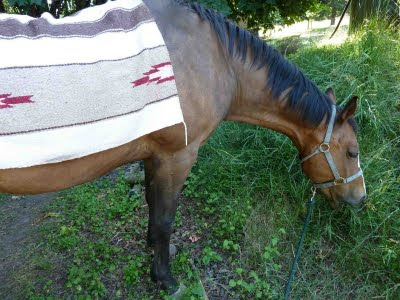 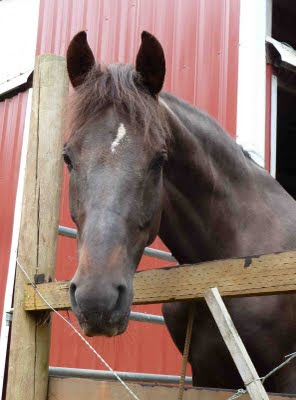 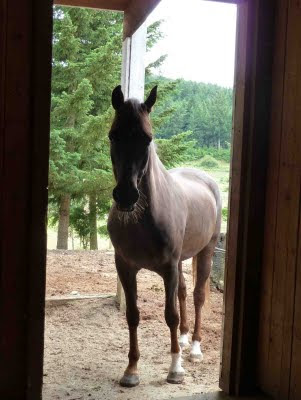 Since I had some free time yesterday, I decided to go visit the Morgan. I've held off going again because with Russell's most injury, I didn't know if there was still a chance of a trade. No point in getting attached, right? But now that I am s-l-o-w-l-y beginning to recondition Russell, hope sprang up again. Plus, a few weeks ago I had a conversation with a Morgan breeder. She cautioned that Ritz's sire is known for throwing "tough" horses; not mean, just not very trainable. Although that has not been my impression at all with Ritz, I wanted to interact with him again with that information in mind. 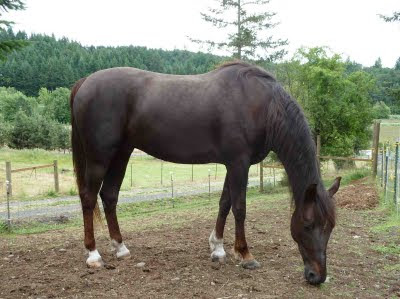 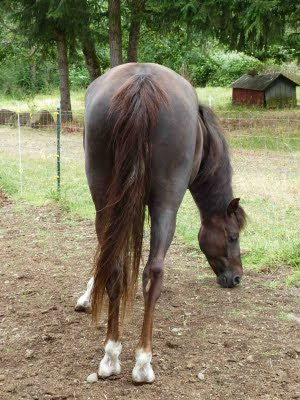 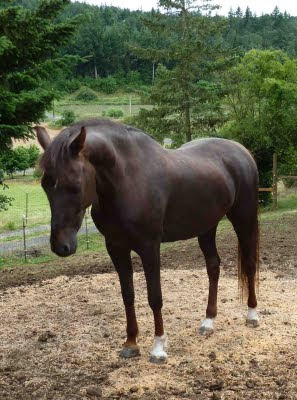 It's been almost three months since I've seen him; he's shed out and gained some needed weight. I interacted with him loose in his stall and paddock, as well as in the cross-ties and out and about on a lead. (I really wanted to ride him, but that would have been foolish with no one around. I don't think he's been ridden in many months, maybe a year.) It was a pleasant visit, and I did not see any hint of the temperament I was warned about.

Now to call Ritz' owner a call to see out if she's still open to considering a trade . . . eventually.
Posted by Michelle at 9:56 AM 4 comments: