Whatever will be (at the show tomorrow), will be!
Preparation for Stella's and my first show together was disrupted last week when my uncle died and I made whirlwind arrangements to fly to Juneau, Alaska to join family for his graveside service (lots of photos from the trip here). I was able to ride Tuesday morning before I left and Friday when I returned, so took the zen approach that a couple days off would be good for the girl's mind and body.
Actually, I rode twice on Friday (keep in mind that all my rides are short and Stella never breaks a sweat)! The test-ride WintecLite from SmartPak arrived a day early so was here and waiting when I got home. Eager to see if it was a winner, I saddled up with it Friday morning and went for a ride. It didn't feel particularly comfortable, and the seat was too big; I had to keep hitching myself forward. When I got off, I measured it and my own two Wintecs – it was at least a half-inch longer, even though it was labeled as a 17.5"; very strange. So I decided to ride again that afternoon in Lance's saddle. I wanted to test my first impression that she objected to it, and see if I felt secure enough in it for a potentially 'dynamic' ride.
The verdict? Stella exhibited none of the little behaviors I had interpreted as objections, and when she startled at something scary in the woods I didn't feel the least bit insecure. I decided, barring any experiences to the contrary before the show, that I'd use it instead of the ancient navy saddle, and return the test-ride. I have shortened my stirrup leathers one hole, which feels just a titch short, but better that than too long, as I tend to pull up my left leg and either lose my left stirrup or get my foot too far forward in it.
To keep the focus on the saddles and Stella's reactions to them, I rode with the hackamore Friday. On Sunday, I switched to the DUO bit, since we have to show in a bit. Too bad, that; she is MUCH happier in the hackamore. So I spent Sunday's, Monday's, and today's rides trying to finesse things to reduce the amount of fussiness and distraction the bit is causing, focusing on using my body, breath, voice (will have to be careful with that in the show ring) and legs to do most of the communicating. We may not get very high marks for "acceptance of the bit" and "elastic contact", but I feel like I'm riding more effectively than I ever have.
Stella was actually quite spooky during today's ride. The wind was blowing the trees around, and something (someone? Lance?) banged loudly in the barn. But the biggest reactions were one quick, short scoot and one giant squat; she has not once freaked out under saddle as she occasionally did during ground work. Lisa has commented that Stella likes having me on her back; maybe she does. 😊
I'm not sure what I'm going to do with her mane tomorrow. Part of it depends on when we arrive and how much time I have to prepare; I'd rather use the time we have to ease her concerns and help her relax rather than 'fix her hair.' I'm not a fan of many long-mane treatments except a really tidy running braid along the crest, but those seem to pull when a horse stretches its neck, irritating the horse and loosening the braid. I've had an idea for rolling her mane under and back along her crest and securing it somehow, so did a 'quick and dirty' experiment with that today. It started out looking okay, but had mostly disintegrated by the end of our ride. 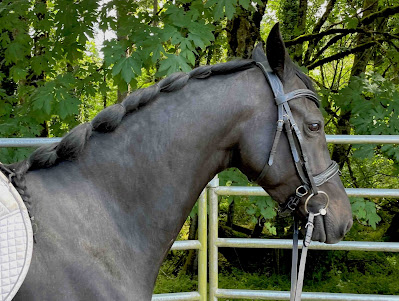 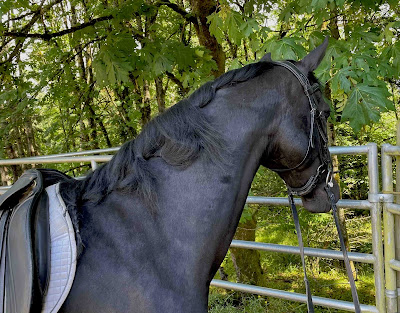 I think it could work, but the morning of our first show is probably not the time to perfect it. So I've reviewed some online tutorials and will do a running braid at the showgrounds if I have time before our first class.
Now if you will excuse me, I need to give the girl her first shampoo and finish loading the trailer.
Oh, my friend Kate is going with me tomorrow. You know you have a good friend when she's willing to show up at your house at 4:30 a.m. to be your horse show support!
Posted by Michelle at 7:22 PM 5 comments:

Hold onto your hats helmets...

...it's going to be a wild ride just documenting the last week, not to mention what's coming!
So after I wrote my last post, I got to thinking (thinking; always thinking). There is no rule against showing in an ancient, battered saddle; people who see us before we go into the ring would surely raise their eyebrows but the judge will likely have her attention on other things while we're in the ring. Check one showing obstacle off the list to address before the entry deadline of June 1st(!).
A second obstacle was Stella's teeth. When I sent Suzan a photo of the damaged Nathe bit weeks ago, she stated that Stella is teething and to switch to a bitless bridle for most of her rides in order to avoid causing 'issues.' Rick did a quick manual check and confirmed she needed a dental – sometime ("the cobbler's children have no shoes"). I didn't want to ride her in a bit as I would need to in a show without that dental, so I finally asked him Monday if he could do it. Bless his heart, he did – even though it was HOT and he and I had moved over four tons of hay that day. 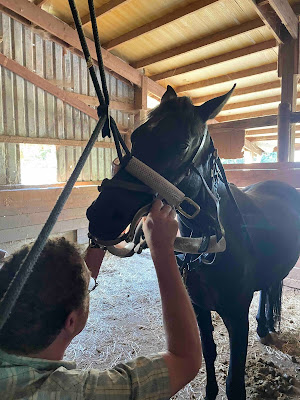 She has big wolf teeth, but he didn't want to give her the additional anesthesia needed to remove them. So he did the necessary floating and said we'd wait and see if the wolf teeth give her any trouble.
While the anesthesia was wearing off, I decided to take advantage of modern pharmacology and clip her bridle path and fetlocks for the very first time. Then I sprayed Show Sheen in her tail, trimmed the end and brushed it out. That felt like removing a couple obstacles. (Lance got some spa treatment, too.)
But the big question/obstacle remained. Not "Are we ready?" I have no illusions about Stella being ready to show; she's not. She's still a hot, reactive mare that's greener-than-Intro Level-grass. No, my concern is that the whole experience could overface her rather than give her positive exposure, and I didn't want to risk that. So on my way to work Tuesday (June 1st), I called the person who knows her best second to me: Lisa.
Lisa had already expressed enthusiasm for my entering the show when we rode at the fairgrounds, and she reiterated how impressed she was with how well Stella did there. She thought I should go for it, with the caveat that I would know if she wasn't ready, and could scratch.
Ha; Lisa apparently doesn't know me as well as she knows Stella! I know people do that, but the thought of paying all the (non-refundable) fees, going through all the prep work, and getting up at o'dark thirty to get to the grounds in time to tack up, lead Stella around for a lengthy looky-loo, and warm up before entering the ring shortly after 8:00 a.m. only to decide "Nope; not a good idea!" was anathema. BUT. If my main purpose for entering this show is to give Stella more life experience, why not go? Even if I end up scratching our Intro tests, she would get new experiences in spades. Besides, it is fun to go hang out with other breed enthusiasts. At a regular dressage show she would be something of an oddity; at a Morgan show, she would be enthused over.
So I scrambled after work on Tuesday in order to get our entry form filled out and postmarked in time. We're going to the Oregon Morgan Classic two weeks from today!
But wait; there's more!
Since I would be slightly self-conscious showing up at OMC with the old navy Wintec, I have been investigating saddle options online. Having another grippy synthetic saddle has a lot of appeal when you're an 'old lady' riding a fresh filly, so I looked at newer used and brand new Wintec saddles. SmartPak has test ride saddles with free shipping both ways, and this morning I realized that if I ordered one today, I would have the saddle in time to try it before the show – and could show in it if Stella and I like it! So I ordered this.
Then I went to the barn to ride. I swapped out the damaged Nathe for the double-jointed snaffle; she has worn it while being ponied but I don't think I've ridden with it. Better see how she goes in it, right?
Ugh. Stella was NOT happy. Lots of mouthing and gaping and tongue contortions; she was so busy fussing with the bit that she couldn't really listen to me. Remembering how well she went in the Nathe at the fairgrounds, I promptly ordered another when I got back to the house (actually, I ordered this, which Suzan says is identical).
So in for a penny, in for a pound whole pile of cash. 😆 Now if I can just find someone willing to come along as a groom of sorts, since I will be showing out of my trailer....
Posted by Michelle at 8:49 PM 4 comments: