Another lesson; CliffsNotes only

Today Stella and I had our second riding lesson with my favorite instructor. We worked in the indoor arena and S didn't take any photos, so this is a "lesson journal" post for me, but you're welcome to read through. 😉
If our first lesson with S made me feel like I had a real dressage horse, this lesson made me feel like I was riding a just-started colt (filly). There was LOTS of activity in and around the barn, some of which Stella could hear but not see. She was tense, nervous, and reactive (although never to the point of being unsafe), so S's goal for us today was to expose Stella to all kinds of new things while finding effective ways to focus and direct Stella's brain. To that end, she placed a couple poles on the ground, along with some cones, like this: — o — o o o  Stella and I walked serpentines through this, stepping over the poles and weaving around the cones with lots of half-halts to slow her turns, alternating with 20m circles at walk and trot. Towards the end of our lesson, we also did several long halts, encouraging Stella to stand and process things calmly. S suggested alternating riding and groundwork during schooling sessions because Stella clearly looks to me for reassurance on the ground and said that will transfer more and more to under-saddle work by doing both several times within a session.
Most of the time we worked on a moderate-length rein, but Suzan did have me shorten them at the end, without increasing contact.  Thumbs on top, hands up and not held close together; encourage enough forward that she doesn't get trappy. At one point it felt like, and S confirmed, that Stella offered a bit of passage; nice to know it'll be there when it's actually time to ask for it! S also commented that Stella is going to be 'stellar..' 😁
Posted by Michelle at 10:57 PM 2 comments:

Back to the future

Last week a friend mentioned that a former student of mine who bought my Swedish Warmblood mare many years ago would be riding in a show at DevonWood last weekend. I looked up her ride times online, and decided to run up Friday to watch her ride her current warmblood mare. 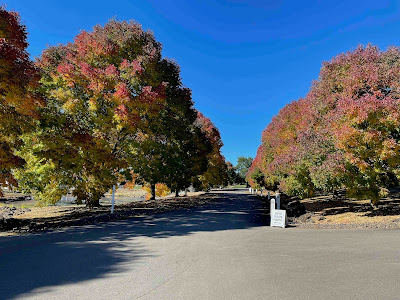 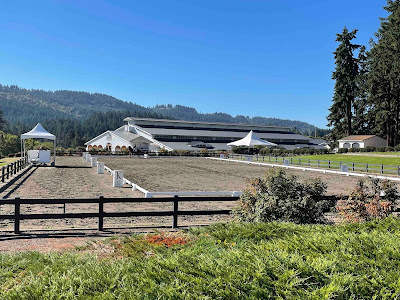 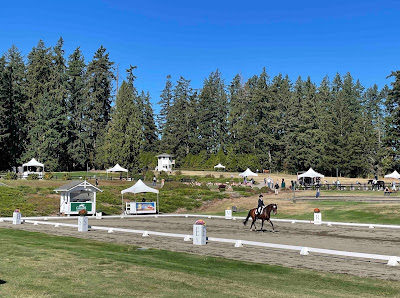 It felt good to be at DevonWood again; it is such a beautiful facility. My header photo was taken there; I've danced with three horses in all four of their 'ballrooms' (competition arenas). The first horse I showed there was my Morgan gelding; I can hardly wait to compete there again someday with my little Morgan mare! 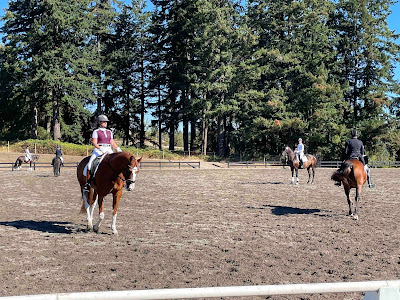 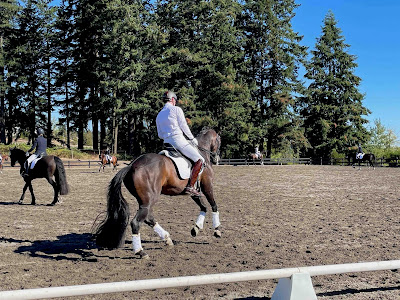 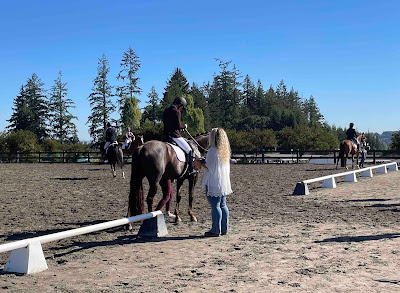 But back to my former student. It took me awhile to figure out which one was her in the busy warm-up arena; I knew I was looking for a mare being ridden by a petite female, but it has probably been a decade since I'd last seen B. As her ride time approached and she headed up the hill to the Sylvan Arena, I followed her train of family and friend to watch. 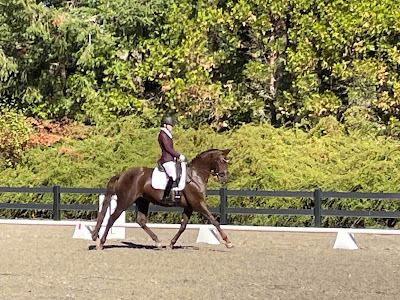 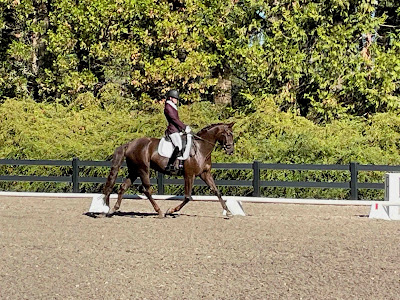 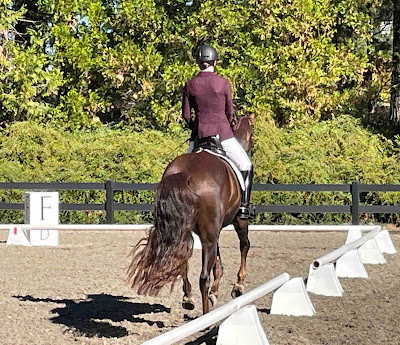 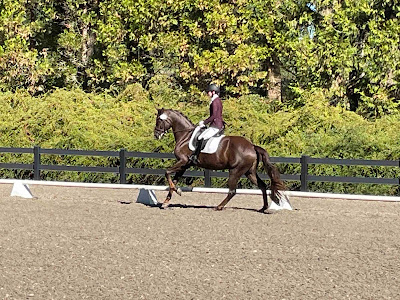 Their Third Level test was lovely. The mare is built uphill with expressive gaits, and B rode her very well. I walked over to where she came out of the ring to say hi and be the first to congratulate her; she seemed surprised and pleased that I'd come.
Before I left the grounds I looked up her score; wow – 72.5%!
Sunday morning B texted me the following photo – they won their USDF Region 6 Third Level Championship class Saturday. Woot! 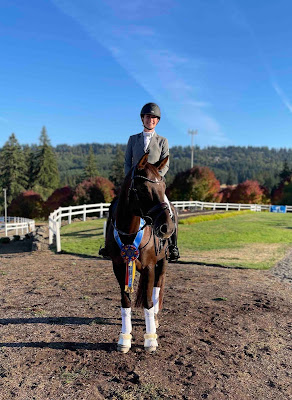 B has come a long way from when I first met her, a teenager riding a half-Arab pony....
And that burgundy jacket (and, I suspect, the gray one in the photo she sent me)? It is MESH. How perfect is that for the summer show season??? I didn't know such things existed; obviously I've been out of the loop awhile riding compromised horses, training for others, and 'bringing up baby Black Beauty.' But someday, when Stella and I are dancing in the big leagues, I plan on getting one. And since the attire rules for dressage are loosening up significantly this December, maybe I'll be able to find one in Stella's color – "first place blue"!!!
Posted by Michelle at 11:32 AM 2 comments:

No, not behavioral ones; Stella continues to be reliably sane. If she doesn't get regular turn-out for some reason, she is definitely more energetic and tense, but never out of control. The eruptions I am waiting on, before scheduling another lesson, are the rest of her canine teeth. Suzan advised riding her bitless or on a loose rein until those come in and her mouth is more comfortable. Since I don't have a bitless bridle (my German hackamore doesn't qualify), I am riding Stella as carefully as I can to not aggravate her sore mouth. Stella is letting me know that I am mostly successful, and we continue to make steady progress, especially at the canter, riding 4-5 days a week. In our last four rides, she has picked up the correct lead and maintained the canter for several 20M circles with my verbal encouragement to keep going. Can you see my smile from there??? 😁
We got over two inches of glorious rain Friday night and Saturday, so for right now we get to ride in a dust-free arena. Sunday I turned her loose in it first to let off steam, as the pasture was still muddy and slick.
Hopefully I can record a dust-free ride with Pivo before the arena dries out again; I want to see us canter!
The farrier was here Monday. When he started trimming Lance, he noticed that Lance's right hock was really swollen: 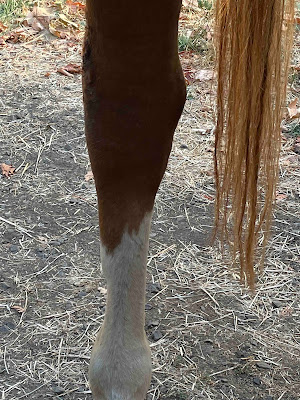 By later that day, the swelling had progressed down the rest of the leg: 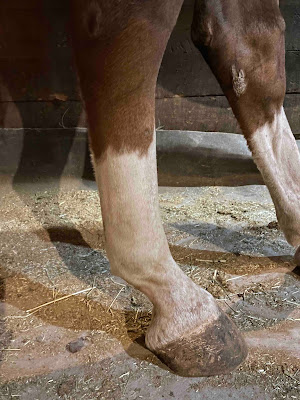 I had been gone Thursday through Sunday and Rick had cleaned stalls that morning, so I hadn't been in with Lance, but I still felt bad that I hadn't noticed. I kept the horses in a couple days to keep Lance from aggravating whatever he had done to it, but it wasn't until I turned him and Stella out Wednesday that the swelling finally went down. All that running....
But the next day it was swollen again – and Lance was lame. 😒 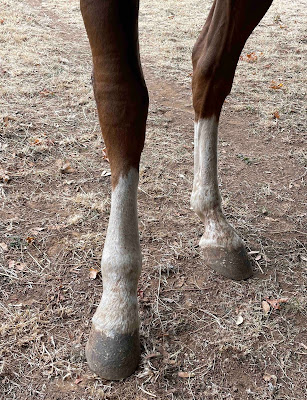 So we added SMZs (antibiotic) to his Bute (anti-inflammatory) on top of his meds for 'asthma' and 'diabetes,' and although he thinks we're horrid for ruining his mealtimes, the lameness has abated though some swelling remains.
Posted by Michelle at 9:59 AM 2 comments: