Moon over my hammy 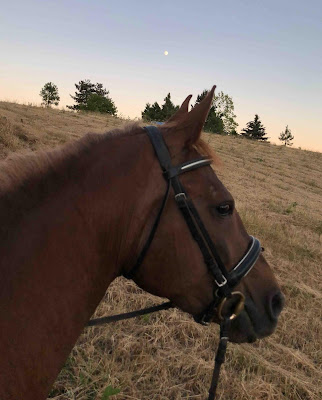 Seriously, Lance is pig-fat! When Rick says that I feel defensive, but it's true. And Oliver is inexplicably LOSING weight this summer; our two horses are Jack Sprat and his wife, apparently. What to do, what to do? All they are getting is mature pasture during the day and a handful of alfalfa pellets to make the "medicine go down" (daily wormer, vitamin/mineral pellets, Lance's spirulena and flaxmeal for breathing issues) when they come in at night; I give Ollie a flake of hay to munch on but Lance fasts until morning. Part of the problem is that Lance utilizes every opportunity to EAT, while Ollie spending much of his time just standing.


Horses are designed to constantly graze so we ALL know that more exercise is the key. I'm doing my best to help Lance with that, carefully utilizing our arena and riding where I can on our hill. Unfortunately, the big field close to our house is being developed into several building lots, so we'll lose that area soon. 😞 There's just less and less available space to ride up here, although last night we rode down through the woods and then back up along the edge of a vineyard. It was lovely. 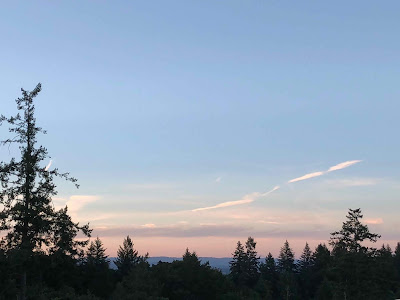 I used to ride all over that land years ago when it was in Christmas trees. Vineyards are busier (and more valuable), and I don't know who owns it or if they would be okay with me riding around it. I need to investigate that.

If Lance was shod, I'd be willing to use the gravel roads more. He has big, hard feet, but develops grooves where his white lines are and collects small rocks there (and bigger ones along his frogs). 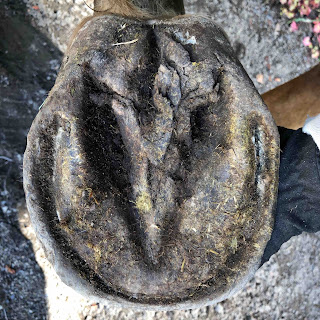 Our farrier comes tomorrow; I'm still waffling about have Lance shod at least on his front feet.

Oh, I may have a fourth student. After watching me give student #2 a lesson last Thursday, she said she liked my methods and asked if she could take lessons as well! We haven't set up a time and place yet, but it sounds promising.
Posted by Michelle at 12:11 PM 4 comments:

When one door closes....

An intense year of struggling to diagnose and treat Lance's Inflammatory Airway Disease effectively shelved any future hopes or plans I had for doing more with him than basic training and trail-riding ("Not that there's anything wrong with that!" to quote Jerry Seinfeld ;-). Earlier this year I toyed with getting a youngster as a future competitive dancing partner, but with my dad's death, preceded and followed by challenging family dynamics, I had to let that dream go as well.

Lance and I were moseying along in our new normal when he somehow sustained another suspensory injury, but Bentley came along just in time to keep me in the saddle and reignite a flicker of hope for more. By the time that little flame was thoroughly doused, Lance was able to be walked again and so we've pottered along. Lance is now back up to what we were able to do before the suspensory injury, and we have our first horse-camping trip of the year under our girth (pictures here).

Meanwhile, Lance has become a CHUNK! I marvel, because at the beginning of last year he was wasting away and I was doing everything I could reverse the weight loss. He shed out beautifully this year, too, after nearly going bald last spring. Between the minimal work and the maximum poundage his endurance is low, but his breathing has stabilized even though we've eliminated the antihistamines and even lowered the prednisolone dose just slightly (he still gets spirulena and flaxseed meal). Our challenges to better fitness are time and place. The sand arena has dried out to the combination of hard and shifty that I don't trust, and our ride-out-from-home range is getting ever more restricted with continued development. I've been putting Lance's Renegade boots on so we can use the gravel roads more, and am contemplating front shoes. I was looking forward to hauling to the beach and elsewhere with my best riding buddy, but she broke her ankle so is out of commission for at least another month. :-(

But wait; what's behind Door #2? Door #2??? I didn't even know there was a Door #2 until a month ago, when someone seeking a dressage instructor was referred to me by another professional. After her first lesson, the owner of the barn where student #1 sometimes boards also expressed interest in dressage lessons, and turned into student #2. Then student #2 referred student #3 to me, a 13-year-old who boards at her barn and really wants to learn dressage. Student #3 came out for her first lesson on Sunday – and Lance became a schoolmaster! I'm still trying to process this surprising turn of events even while feeling thankful and affirmed. Life is a wild ride!
Posted by Michelle at 10:26 AM 7 comments: