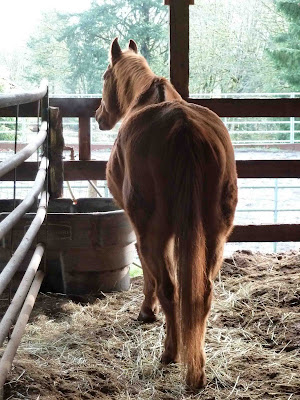 Docs Sam Peppy, otherwise known as Sammy (or Beans), is Rick's old cutting horse. He is looking pretty tough but is still alert and enjoys life, so who knows how long he'll be around.

My horse activities lately have consisted of . . . doing chores. Oh, and I did go look at a couple of fillies owned by the breeder of the Morgan I once owned. Too much doubt on my part to go there - doubt about how big they would get and their aptitude for dressage; whether I want to deal with a mare; whether I have the time to start a youngster when I'm homeschooling my own youngster. For now I'm pursuing the lease of the horse pictured here; if the owner and I can come up with a lease contract agreeable to us both, I'm hoping to pick him up on February 12. That would be my first opportunity, because my sister just had her first baby and I'm utilizing a free ticket we have to fly to Texas and meet my nephew!
Posted by Michelle at 8:27 PM 2 comments: 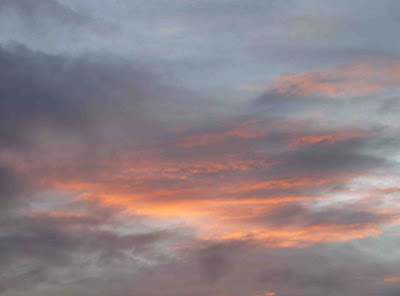 Sunset on my way home today

Today I met Larry, the horse pictured in my previous post. He doesn't look like that now; he's underweight, under-muscled, wet and muddy. Worse, his manners were seriously lacking. But as you might guess from my title, I see possibilities. Manners can be taught, weight can be gained, muscling can be developed. The gaits are there; he moves off the leg nicely. We need to fine-tune the lease agreement and I'm not going to do anything until after my sister has her baby and I make the trip so be with them for as long as I can manage. Then, we'll see!
Posted by Michelle at 10:27 PM 4 comments:

We've been having snow flurries since Saturday night, to go with the flurry of horse-hunting activity. After Sunday's shopping, I was feeling pretty subdued about my prospects. Then today I stumbled upon some horse ads when placing an ad for sheep on a site I didn't even know had a place to advertise horses! I called about a broodmare (broke to ride) that is "very affordable to a good home," and learned about another horse the owner has which is available for lease - this handsome fellow: 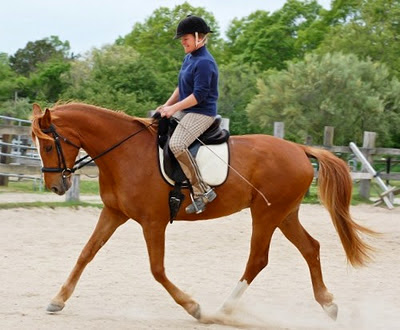 He looks wonderful, sounds wonderful, and is even eliciting a somewhat positive reaction from the husband. I'm hoping to go meet him this Sunday!
Posted by Michelle at 9:08 PM 3 comments:

This morning I looked at a couple mares, a Paint and a Quarter Horse. Watched them move a bit; didn't bother to ride them. I knew they were not likely to be what I'm looking for going in, but hey, it never hurts to look!

This afternoon I drove in the other direction to look at a green, mostly Thoroughbred gelding. Given the weather the owner didn't want to haul him anywhere and only had a grassy/wet round pen in which he could walk and trot. He has a sweet personality, but several things about him give me pause.

My husband has warned me not to get something "just because it's a horse." Ha. Not likely. Horses are a considerable investment of money (even "free" ones), time and emotions; I want a partner I can enjoy and grow with for years. I may have to wait awhile, as hard as that is.
Posted by Michelle at 6:29 PM 3 comments:

As soon as I hit "Publish Post" I'm headed out for a brisk walk in the cold fog and then I'll ride Breezy. I have to admit that seeing how big I looked on her in the New Year's Day photo uninspired me, but the desire to preserve riding-muscle memory overrides my lack of inspiration.

Today, I think my friend Laura found a dancing partner after a string of unsuitable horses. I am thrilled for her . . . and trying (not very successfully) to fight feeling sorry for myself. Patience is a virtue that I apparently need, because it is only developed by practicing it! I have spent some time perusing sales sites and exchanging emails on various horses, but am not at liberty to act on any interest I may have (for reasons I am not free to disclose). It's probably just as well. I have a very limited budget and cold feet about spending it. Things are tight enough right now that my "horse money" may need to be available as an emergency fund for something else.

BTW, I've added a link at right to an article I ran across that expresses many of my own thoughts on "Natural Horsemanship." Let's hear it for GOOD horsemanship!
Posted by Michelle at 4:31 PM 4 comments:

...for she WILL find something to train!

With rain predicted for later in the morning, after chores I decided to make Oliver my victim subject of the day. Oliver is a 11-year-old reining-bred Quarter horse given to us by his owner after she decided he was never going to be an athlete. Rick has been his vet since birth, when Oliver got sepsis followed by several other problems; he was nicknamed Oliver from a bad bout of projectile diarrhea that got poop "all over." He's line-bred to Smart Little Lena on top and bottom, and (perhaps because of that) does not have the best mind. Rick thought he might make a good horse for Brian someday, but has realized since that he will never be a kid's horse. (After watching the movie Temple Grandin, it occurred to both of us that he might be autistic!) Still, with Rick's cutting horse getting old and decrepit, we keep Ollie around for Rick's trail horse. That means he rarely gets ridden. Enter the idle trainer - that would be me! 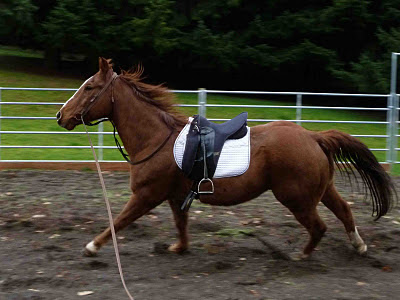 This morning I saddled him up and took him out to lunge some steam off. He had plenty of energy but didn't buck at all, a good sign. But it quickly became apparent that he was lame in the back end. We ended his exercise by leading him around at a walk with Brian on his back.

I turned my attention back to Breezy. Decided to lunge her to help build condition and muscle without my weight, so put on a snug halter and lunge line and took her to the arena. When I clucked to move her out, she kicked out at me and then bolted, head and shoulder thrown into the lunge line so that she had full advantage, ripping the line from my hand (and re-straining my tennis elbow, the little snot). Needless to say, that got her saucy little pony butt worked harder than was my original plan! First I chased her around until stopping and coming to me sounded like a dandy idea to her, then I bridled her and ran the lunge line through one bit ring, over her poll and clipped it to the off-side bit ring (what I did with Ollie, and should have done to start with on Breezy). When I clucked to put her on the circle she tried the bolting trick again, but hit the bit and decided very quickly that she could be a lady. Ponies!!!

Today I was offered the free lease of a five-year-old barely started Warmblood-cross mare if I wanted a project to work on. I've heard through the grapevine that the mare can be a bad actor, so I'm cautious. Can't quit (or take medical leave from) my day job of being Brian's homeschooling mother!
Posted by Michelle at 11:48 AM 4 comments: 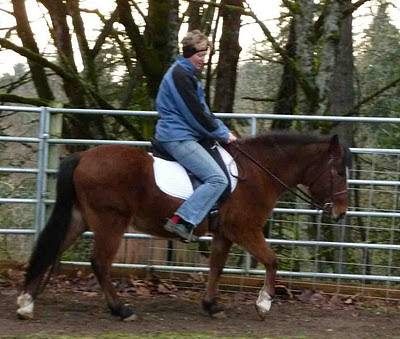 The one thing I try to do every year on New Year's Day - some way, somehow - is get on the back of a horse. With Russell gone, I took Brian's pony Breezy for a spin around the arena this morning, since she is the only one remaining who's been ridden English. I don't know that she was thrilled, but she was pretty good considering my size and the fact that Brian asks little-to-nothing of her in the way of correctness. Since Russell was the only one getting any regular attention, the three remaining equines are in much need of conditioning. Might as well address that as much as possible while I'm waiting to see if there is another dressage partner in my future!
Posted by Michelle at 6:01 PM 2 comments: