Today, while my camera battery was charging and the sun was shining, the horses got their first taste of spring pasture!

I am always nervous about introductions, knowing how much damage one kick can do. So we turned out the three "old-timers" in the arena to run off steam and put Lance in the pasture. Once everyone settled down, the three got to join Lance. Fortunately, the grass kept everyone's attention and there was no ugliness. So far, so good!
Posted by Michelle at 9:57 PM No comments:

Rick asked me to lunge Lance without saddle or surcingle to see if the lump still occurs. "How could it?" I thought, but complied anyway. And you know what? The answer is not conclusive! There did seem to be something, maybe a thickening, along the right side of his spine in the problematic area afterwards, but I can't be certain it wasn't there before starting. Plus, Lance had several other bumps (bug bites?) scattered over his back today. I'm thinking I need to replicate this experiment and palpate more thoroughly "before" in order to more accurately compare "after."

Rick said he might be able to ultrasound Lance's back tomorrow, but the cobbler's children know better than to get their hopes up about shoes.
Posted by Michelle at 8:51 PM 4 comments:

I got back from Texas Monday in time to help with evening chores. I said Lance's name and his beautiful head shot up and he came right to his stall door. Yep, I like him every bit as much as I remembered. :-)

Yesterday I turned him out in the arena for a couple hours to roll and run and play. Today I tacked him up with lunging surcingle and worked him in side reins. At first he had a lot of energy (for him), but by the end I was having to remind him that it's his responsibility to maintain whatever gait I have asked for. 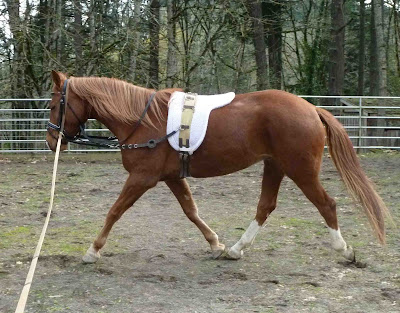 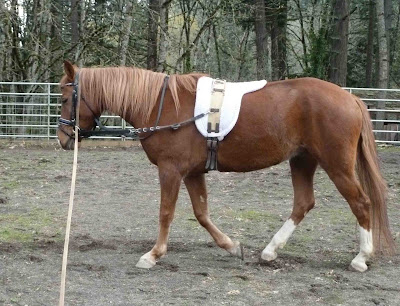 When I pulled his tack off, there was a slight bump on the right side of his backbone in the same ol' place. Rick says he's going to ultrasound Lance's back to investigate further, but I don't know when he'll get around to that. I've called and left a message for the saddle maker/fitter I've used, but still don't anticipate him making a trip north anytime soon. Laura has offered to bring me her saddle with the interchangeable gullet to try, and Theresa just sent me photos of an Ortho-Flex dressage saddle she has for sale. The latter sent me searching through old emails to see if I still had any info on an Ortho-Flex saddle I tried on Russell years ago . . . and I found something very interesting. Almost nine years ago I sent the inventor of the Corrector (AND Ortho-Flex) the photos below, showing a swelling I was seeing on Russell's back after every ride when using the Corrector. 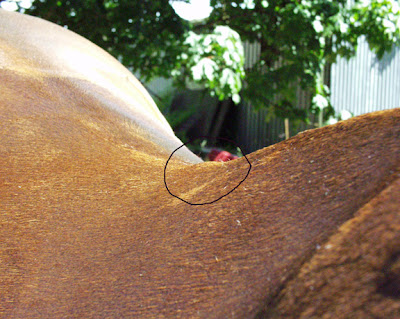 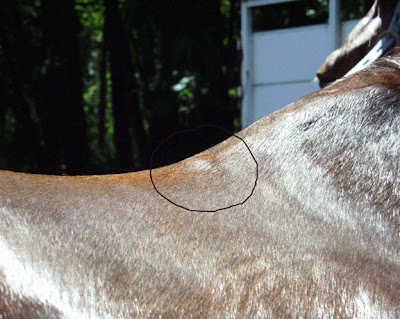 Wow, that is eerily similar to what I am seeing on Lance's back after riding!

In his email response, Len said, "I know what the problem is, thanks for the pictures. Give me a call and keep riding with whichever combo balances you best concerning shims or not. Keep riding with the Corrector and expect the lump. I'll explain when you call, it's easier that way." I do not remember what he said when I called; I do know that I eventually discontinued using the Corrector on Russell because he seemed happier without it.

Last year I used the Corrector for every ride on both Larry and Horton for months, and neither of them ever got a bump or showed any other adverse reactions to the Corrector. How very strange that both Russell and Lance, two very different horses with very different back conformations, have reacted to it in the same way years apart! 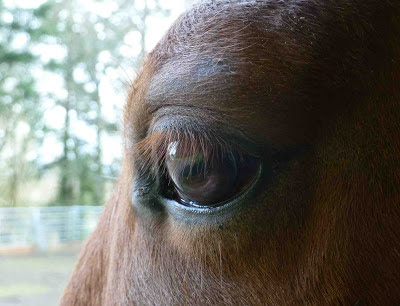 I wore my kelly green Polarfleece breaches today so Lance wouldn't pitch pinch me. ;-)   They felt good on this brisk and breezy day.

We had a good schooling session; his canter is getting steadily better – in spite of an apparent problem with my saddle's fit.

For the last week or two – at least; I'm not sure – I've noticed a bump on Lance's spine when I untack him, just beyond the base of his withers pretty much at the lowest point of his back. It's not sensitive to palpation, but it can't be a good thing. The lump goes away after a few hours, but comes back during every ride. I've tried different saddle pads, I've used my fleece numnah instead of the Corrector, I've tried various combinations of shims in the Corrector, but the lump is still there after each ride.

I'm afraid I may need a different saddle, but my favorite saddle fitter/maker isn't going to be in the area anytime soon. I don't want to embark on a saddle hunt without his input (along with my husband's and my favorite instructor's). Neither do I want to cause any damage or discomfort to Lance, this horse I am attached to beyond reason. He doesn't deserve that; no horse does. I'm thinking being gone for a week may be a good thing....
Posted by Michelle at 8:28 PM 9 comments:

With two-plus months of conditioning and two shows at Intro Level behind us, it's time to focus on Lance's canter work. He is relatively obedient about picking up the canter, but prefers the left lead and sometimes takes it when asked for the right lead. He also has to be encouraged to stay in the canter, which is partly due to lack of strength and balance, I'm sure. He was a stall-potato when he came, after all! Now that I'm cantering him more, he is actually breaking a sweat occasionally – barely.

Yesterday I had Brian video some canter work, and was surprised to see that it doesn't look as bad as it feels. It's nothing like Don Juan de Hus' canter, but visualizing the canter of the "best four-year-old in France" when I ride Lance certainly can't hurt!
Posted by Michelle at 10:14 PM 2 comments:

Lance has show #2 under his girth now. For the second time in two weeks, we were blessed with a dry day; a wonderful gift for someone like me who shows out of her trailer!

Once again we were able to arrive early enough to school in the competition arena, so Lance could get a good look at the surroundings and realize it was a safe place. When it came time to enter at A, he was more calm and relaxed than many show veterans; what a boy!

Speaking of boys, my husband and son came to watch this time, so I handed my digital camera off to them to record our rides (Rick recorded the first one and Brian the second).

As you can see, I didn't get Lance's mane braided. I was running short on time and it wasn't worth stressing over.

Our scores and placings didn't indicate the improvement I'd hoped for over our first show; we got a 69.375% for second place in Intro A, and a 65.313% for third place in Intro B. But I felt better after watching the videos; I think Lance is moving with more energy, and I am maintaining better contact. (I welcome your input!)

Regardless; onward and forward. I will continue to work on developing Lance's strength, condition, and suppleness while keeping him enthusiastically responsive to my "go" aids and promptly responding to my "whoa" aids. This should improve his canter slowly but surely, so Lance can debut at Training Level at our next show, whenever that may be.

Lance will be getting something of a Spring Break, though. My dad is scheduled for cancer surgery on the 19th, so I'm going to fly to Houston, TX to be with my folks for a week.
Posted by Michelle at 5:15 PM 14 comments:

Yesterday my son and I were in a grocery store when a woman behind me asked, "Do you have a horse named Lancelot?" I turned around to see a complete stranger. My surprise and confusion must have shown on my face, for she quickly interjected that her husband (she pointed him out at the deli counter) was Lance's farrier before Lance came to live with me. I actually had met this couple years ago when we went sledding near their property, although I never would have recognized them from that occasion. The woman recognized Brian, having seen him with Rick at the feed store more recently.

The farrier joined us and both husband and wife told me how much they loved Lance, going on and on about how smart and personable and handsome he is. The farrier, recognizing the need for boundaries and training in a young horse who had had too little of either, had actually worked on teaching Lance to fetch and carry! Hmmm, is that why he always has to have something in his mouth, or is that just capitalizing on a tendency he already has?
Yesterday Lance seemed rather more nervous or full of himself than usual; hence the lunging. I think it was a combination of frisky sheep out on grass and Brian prowling through the lower pasture – or maybe it was just spring fever. It was certainly one of those days that could make you drunk on sunshine. If you click to biggify the photo below, you'll see just what a shiny bright afternoon it was.
(I sure wish I could figure out how to customize my blog layout to expand into all that white space on the left so my photos could be bigger! I've tried without success....)

After Lance 'expressed' himself on the lunge line, he was very good under saddle. I'm tickled pink with the progress we've both made since his first competitive outing; I am really looking forward to my mouthy mustang's next showing this Sunday!
Posted by Michelle at 9:44 PM 9 comments:

After last week's braiding attempt, I turned to Google for some ideas and tutorials. The most helpful one I found was here. Not only were the instructions for braiding clear, but she also shared her secret for an all-day French braid, plus an important tip: Braid and ride before a show, as some horses may be bothered by things feeling different. I figured Lance might be such a horse, because he seems to care about the where of his hair.

So today I did a quick and dirty French braid (sans yarn ties), then schooled the boy.
Lance didn't seem bothered by his new hairdo in the least. As you can see, there was some loosening, but I doubt it would be noticeable from the judge's stand. I need to tweak my technique just a bit and will take more care when doing this for shows, but am basically happy with this method of braiding. It's fast, and lets Lance keep his beautiful mane! His forelock will be the problem area; I might have to muzzle him to get that bit done. :-/

After riding I decided to take advantage of the partial sunshine and give Lance a shower. I left his braid in so I could clean his neck thoroughly, then loosened it and took him out into the pasture to enjoy some fresh spring grass while drip-drying. 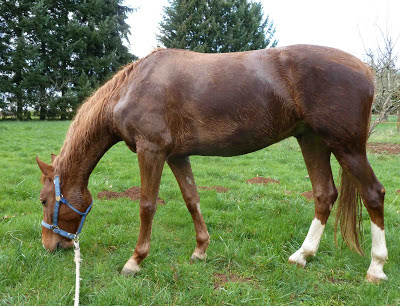 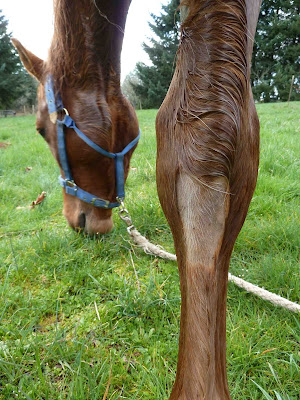 His suspensory injury rarely crosses my mind these days, but the shaved area (so Rick could do the final ultrasound check) really stood out today after his shower. I hope we never need to shave that – or any other – area again!
Posted by Michelle at 5:48 PM 6 comments: