Stella has had a light couple weeks as we were gone this past Wednesday-Sunday (details on the farm blog). Getting to be a bit more 'feral' for a few days at the same time the weather turned brisk has made Stella more reactive again. No worries; we've just gone back to some basics this week. 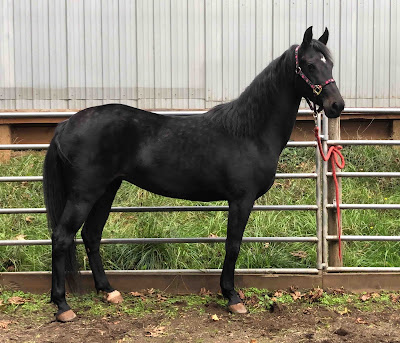 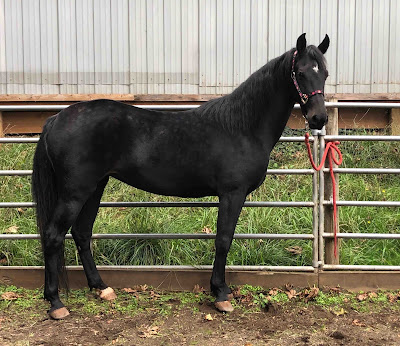 Lisa was going to come out and give us a lesson Wednesday, but when her plans changed to keep her at home she suggested I haul Stella to her place. Seemed like a good opportunity to expand Stella's horizons, so I loaded her up for her second trailer ride in two weeks and off we went!

We worked on basics in tandem with Lisa working a young mustang or other (she had two tied in their small covered arena), and then moved on to Stella's biggest bugaboo – things falling off her while moving. We used a coiled lariat, a loose rope, and an ancient English saddle sans girth before actually saddling her up with a Western saddle – which got very little notice. Then Lisa brought in Lance's daddy, 25-year-old Kiger stallion Dino, and I ponied her on a short trail ride through a pasture and tree lot with other mares, then led her through ground poles and over a 'bridge' several times. Dino was stellar while Stella was dyno-mite; sorry, couldn't resist, but it's true. 😊 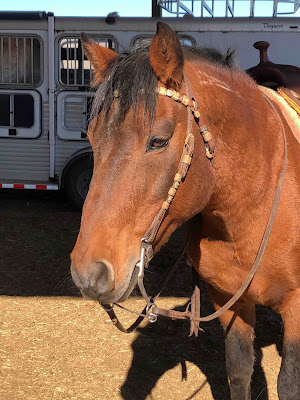 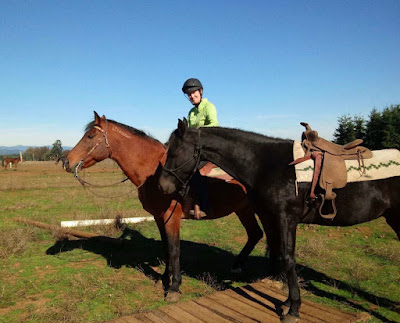 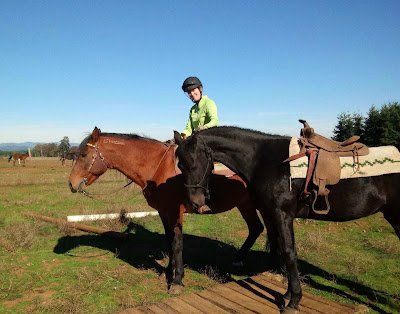 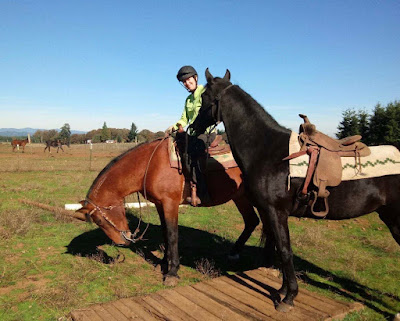 Next week Lisa and I plan to take our youngsters to Perrydale Trails and walk the courses with our horses in-hand (I'll get my steps in that day!). I was hoping to schedule another long-lining lesson with Suzan the next day, but rain is supposed to move in Tuesday night so that might be a wash-out.

...before there's an avalanche!
In plain language, so much has happened in the last two weeks that I'm in danger of forgetting things that I want to document. So this might not be the most eloquent post; maybe a "Just the facts, ma'am." Oh, plus LOTS of videos that I insert here for my own reviewing convenience, not because I expect all of you – or any of you – to be that interested.
Besides getting video proof of riding Stella, Lisa did a lot more with her at our last lesson on September 30. I took seven other video clips to help me remember what we worked on.
As you can see can see, Lisa added a LOT of new things in that lesson – leading from a distance to build confidence, ground-driving with the lines run through surcingle rings on both sides and running around Stella's hind legs, having me add bending and 'one-rein' stops to our bareback rides, adding the saddle back in the working equation, and adding trot to the circle work. Stella handled it all very well, and as I continued to practice daily and think about my calendar, I decided, after conferring with Lisa, that we were ready for a long-lining lesson with Suzan Davis Atkinson. Last Wednesday was the only possibility until sometime in November when the weather could be a problem, so instead of Lisa coming to my place to give us a lesson, she met me at Clover Valley Equestrian Center to watch Suzan work with us.
When I went to load up Stella, I realized there was a rather important hole in our recent trailer-loading practice. (Remember, she had only been trailered twice in her life before this, and the last time was more than nine months prior.) We had worked on getting in and getting out, but I hadn't actually secured her in place to haul. How was I going to do this by myself, without freaking her out? I knew that leaving her head whether she was tied or not (I prefer not), moving the divider over, and securing it by her rump would cause her concern at best, or a confidence-destroying wreck at worst. As I stood in my trailer with her, I had an idea. I turned her around as if to lead her out, then backed her into place. That allowed me to move the divider over and secure it while standing near her head where I could stroke her neck and reassure her. I tied the lead rope around her neck, closed the trailer door, and off we went!
At Clover Valley Stella unloaded calmly and then stood there, taking in the new sights, sounds, and smells; we were all impressed with her! We eventually made our way to the round pen, and learned how to properly set up all the equipment, using some carabiners to enable optimum placement of the long lines. Since I don't have a lunging cavesson we just used her web halter; I assured Suzan that that's what we've been using and she's very soft in it. Stella proceeded to prove that. I took the first short video, then Lisa offered to film so that I could focus on Suzan's instruction – and then get my hands on the lines.
Back home, Stella and I continued our near-daily training sessions. Sunday I had time to try long-lining her on my own, without the benefit of a round pen. She did very well . . . until the line on the far side got up under her tail. When she reacted it got tighter, and then she REALLY reacted; she's obviously not ready for a crupper! 🤣 Eventually I got her stopped and the offending line moved; we did some more long-lining after that and all was copacetic again.
Yesterday I worked her saddled, like Lisa did in her last lesson with us (and I've repeated at least once since). That was going well, too . . . until I asked her to trot and apparently a stirrup "attacked" her. She startled, the stirrup bounced, and she went to scrambling, kicking and bucking like she was trying to dislodge a cougar! Again, I eventually got her stopped, and tried to de-escalate things. It was kinda-sorta working, but then she started scrambling again and actually fell down on her side. We did just a bit more work at the walk, and then I took the saddle off to finish up with easy, beginning 'building blocks' to give her back some confidence.  Whew; that felt like 'no steps forward; ten steps back'! So it goes....
#################################################
Oh, Lance got his third shockwave treatment on Sunday. I assume Rick will ultrasound the injured area to assess healing, and Lance should be cleared to start hand-walking soon. I've missed riding my big red goober even if we do just walk, but it has been nice to focus exclusively on Stella's training guilt-free!
Posted by Michelle at 9:30 PM 4 comments: