Maybe my ride did it

Ollie's colic did not resolve as quickly as it has in the past. He got another dose of Banamine yesterday morning and still wasn't quite up to snuff last night. I got home from work yesterday afternoon before my guys, so I fed the fire, let the dogs out, changed my clothes, and headed to the barn for a short ride in the gathering darkness. Ahhh; I needed that!

By this morning Ollie was feeling fine and ready for breakfast; yay! Maybe I'd better squeeze in another short ride this afternoon before our church's New Year's Eve vespers and talent show – you know, to keep Ollie feeling fine.  ;-)

Besides, tonight the temperature is supposed to drop below freezing and stay that way for days. Lance and I can't ride on concrete....
Posted by Michelle at 2:47 PM 1 comment:

I didn't have time to ride again today, and Ollie was colicky again tonight. I have to work tomorrow and Saturday is full with church stuff; guess I'll hope for better luck on Sunday. Good thing I have cold weather riding gear; we're supposed to start the new year with a week-long arctic blast!
Posted by Michelle at 9:53 PM 1 comment:

We are back from Texas to more moderate (for now) weather. Lance and I had a nice ride on Monday; Tuesday I worked all day (perfect; it was rainy); today I planned to ride again. But a friend and her daughter came over to visit and that took precedence. The gallant Sir Lancelot was going to give the little princess a ride, but when we went to the barn, Oliver was colicky. I conferred with Rick by phone; Ollie recovered with walking and Banamine, but by then my friend had left and it was dark.

Even though I hope to ride tomorrow, I decided to lunge Lance tonight just to give him some exercise. He started out his normal playful self; we warmed up at walk and trot before starting canter-trot-canter transitions. Before very long he would no longer pick up the canter for love nor money, and really didn't want to keep trotting. His nostrils were flaring much more than was warranted by the short time he had been moving, and his breathing, when I walked up to remove the side reins, was loud and labored.

I have no idea why he has this problem sometimes; it has happened a time or two in the past. It's foggy out there; does the cold, humid air bother his lungs? Or did not being able to put down his head to cough occasionally (like he does under saddle) once I put the side reins on cause phlegm to accumulate? I will be interested to see how he does tomorrow; I suppose we may end up going for a walk instead of schooling.
Posted by Michelle at 8:17 PM 2 comments:

Dashing through the snow

Lance is going a little stir-crazy because we had to reduce the size of his paddock to protect him from playing with the stock tank de-icer. So this morning I led him out to the arena to run and play a bit. 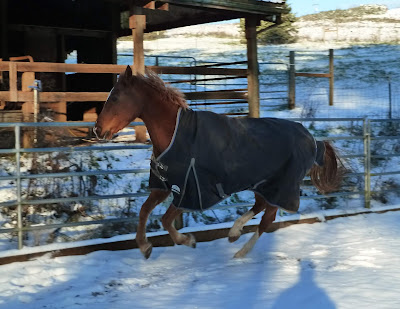 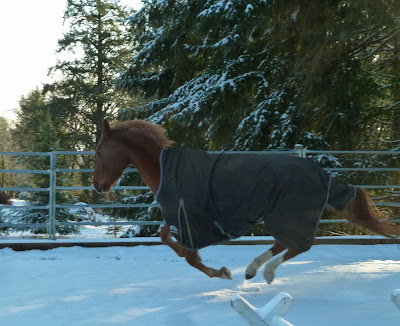 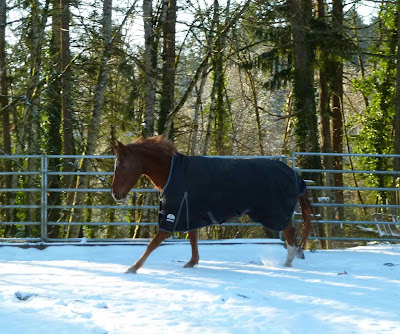 Neither of us realized at first that Brian had left the gate into the pasture unlatched. Lance saw the opening first, and raced out. 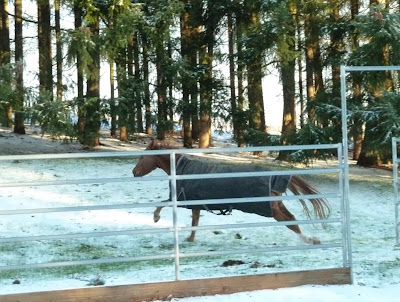 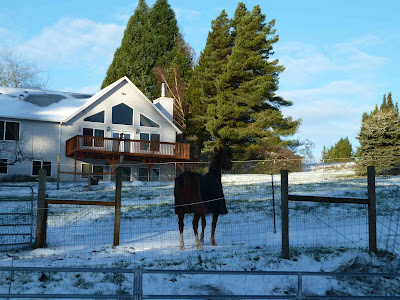 I have too much experience with soft tissue injuries so I held my breath and hoped he didn't hurt himself. Thankfully he has a good recall (it helps that he's very food motivated), so before long he was back in the arena on safer footing.

Later in the day, I decided to get in a ride. We didn't do a lot, just some warm-up in the arena, a walk down to the end of the lane to get our mail, and then back to the arena for a bit of schooling. As always, it was good for my soul. :-) 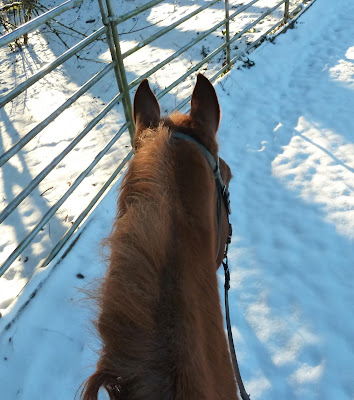 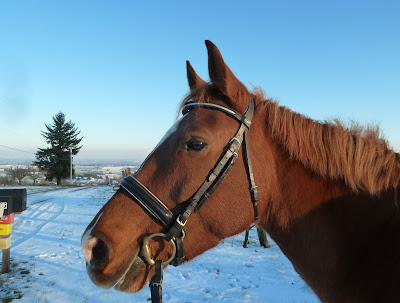 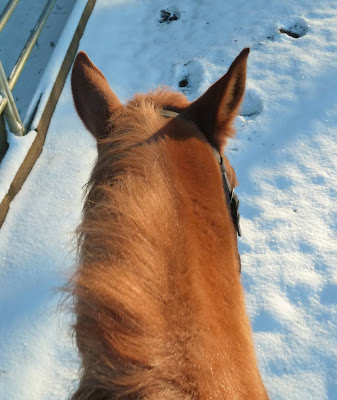 I choose to be thankful...

...that I got in one good ride this week! 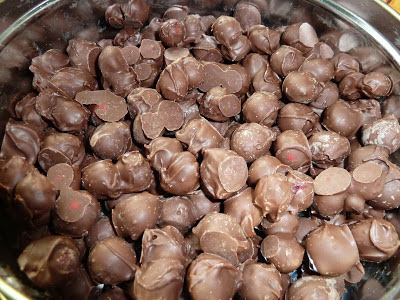 My Sunday was otherwise occupied, in part making those chocolate-covered cranberries to take to our dressage chapter's Christmas party that afternoon. I have been fighting a cold generously shared by my husband last week, and by the end of the party I had completely lost my voice.

Monday I still had no voice (still don't), but felt pretty good otherwise and took advantage of some time to ride. I got a little start as I approached the barn to find Ollie loose: 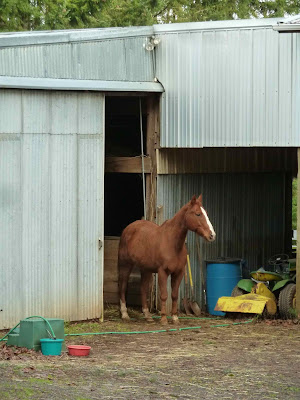 Apparently I didn't latch his stall door after refilling his stock tank that morning. This must have been his first look around outside, because INside the barn he had sampled all the hay, left a steaming pile, and found the bucket of apples I picked for Lance's riding rewards: 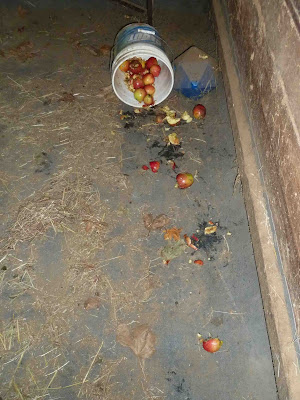 After Ollie was secured, Lance and I had a lovely schooling session. And that looks like the only one we'll be getting in for awhile. I had to work on Tuesday and take my MIL to Portland today, and came home to snow, slick roads, and frozen arena with no sign of a quick thaw before our Christmas trip. It is what it is; I'm trying not to be jealous of those of you who have access to an indoor arena!
Posted by Michelle at 11:05 PM 1 comment:

With all that has been going on in my life and trying to post on my farm blog every day of November, posts here have been pretty scarce. But last week included several blog-worthy items so I'm going to do my best to fight through the fuzzy-headedness, sore throat and aches to tell you about them.

First of all, the results of my Cyber Monday shopping and eBay stalking both arrived. 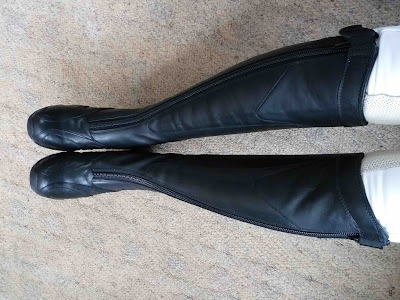 The tall boots are fantastic! My right calf is bigger than my left so the left boot fits perfectly and the right boot is TIGHT; but thanks to the elastic panel it isn't uncomfortable.

The bitless bridle was . . . interesting. It can be used as a side-pull and with cross-under straps; we tried out both options when we schooled on Sunday. 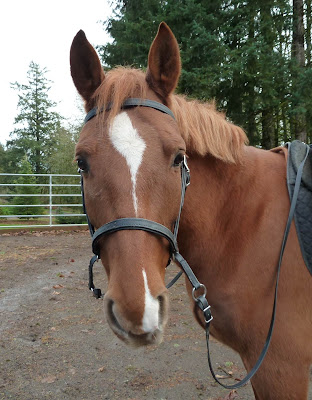 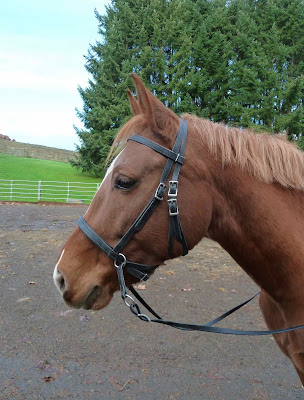 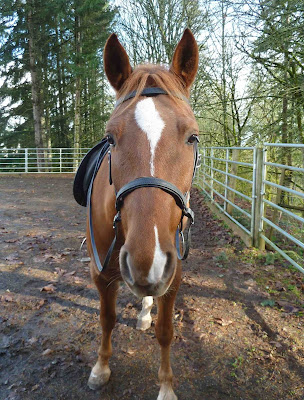 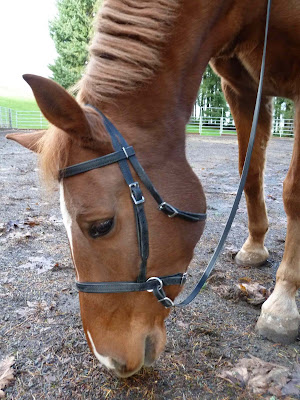 Yes, we schooled, not just "moseyed," because I wanted to see if we could dance with the same frame and movement that we work on when using our regular bridle without anything in his mouth. I was not impressed with the cross-under option (first one shown), but the side-pull option worked quite well. The problem was, it put a lot of pressure on the bridge of his nose with a relatively narrow, unpadded cavesson, so I've decided to send it back. (It is a demo model.)

The next two rides (with our regular bit and bridle) were excellent. After playing with passage in our lesson with Julie, I had worked once with Lance in hand, tapping the top of his rump with my dressage whip to see if he would sit and offer any passage steps; he did, even though he got a bit frustrated with the whip. I thought about working on that exercise again, but didn't have a lot of extra time so just mounted up. Even though I have trouble executing it, I decided to tap the top of his rump from the saddle to see what he would do. The result was MUCH better engagement of his hindquarters with none of his usual little stumbles. We worked on that again the next day with equally good results. So excited to find something that works for us!