How to put this to good use?

This morning when Brian and I went down to do chores, Breezy's stall door was ajar: 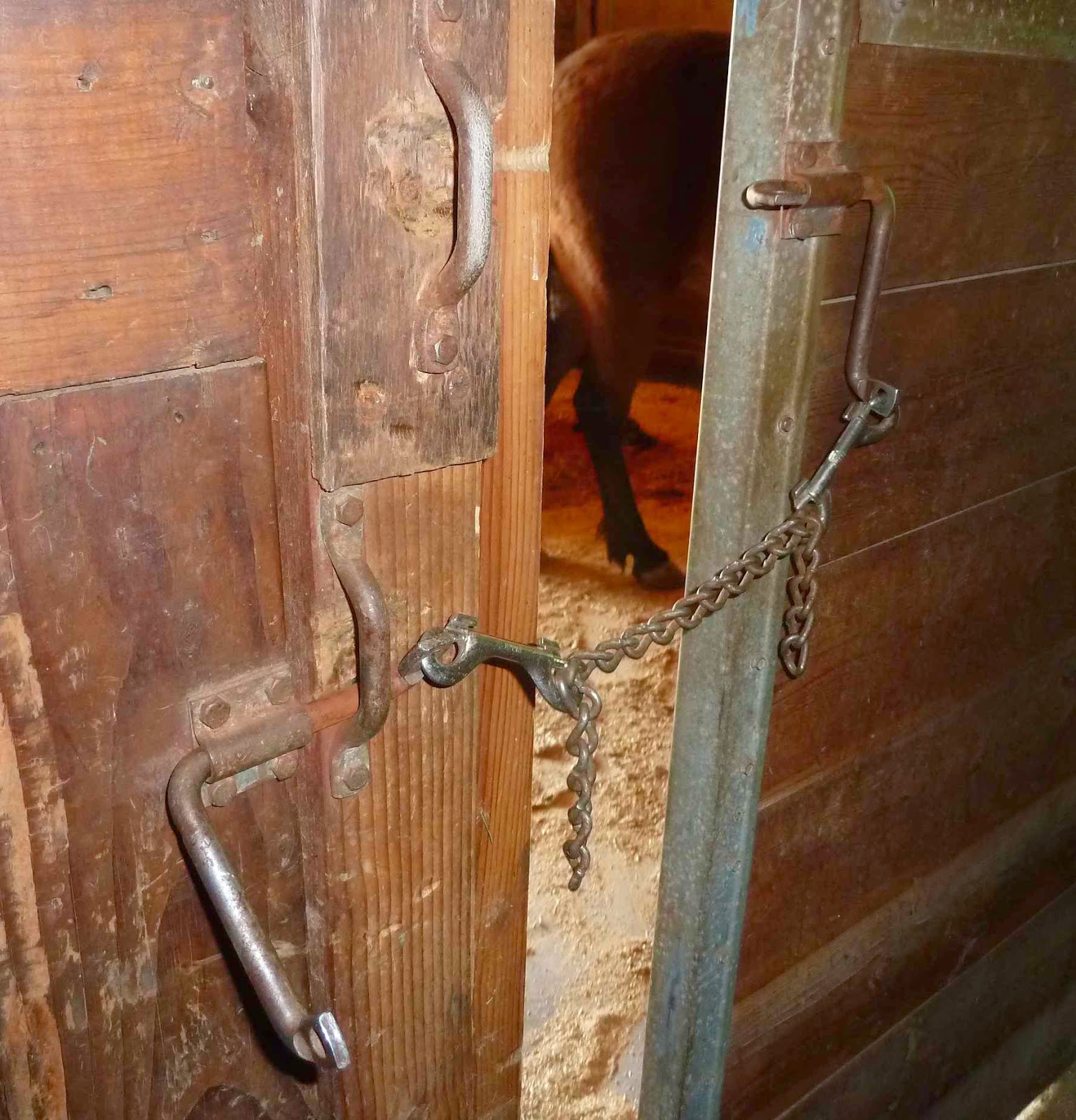 Lance had managed to jam the quick link so badly that Rick had to cut it off, so the stall door latches were secured with just the clips and chain. Fortunately that was enough to keep Lance from actually letting himself or Breezy out.

When we got home late this afternoon, I went to toss something in the trash bin outside the garage and spotted this:

The turkey! I headed down to put him back in his stall, and realized he had company: 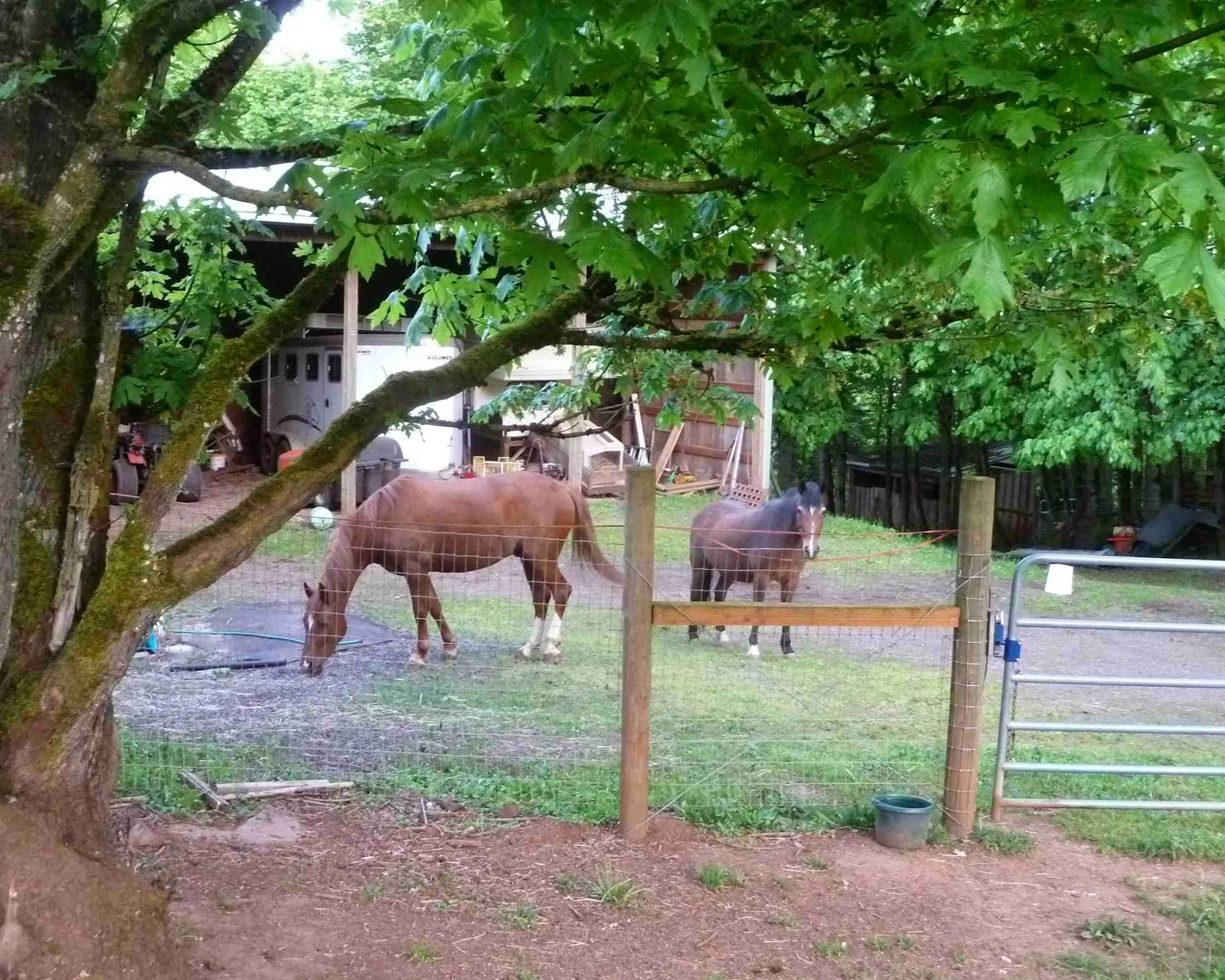 The chain – both clips attached – was on the barn floor. Fortunately Lance and Breezy hadn't trashed the barn; the grass was the obvious attraction. There was a bit of a mess around the grain bins, but our set-up makes accessing them pretty difficult: 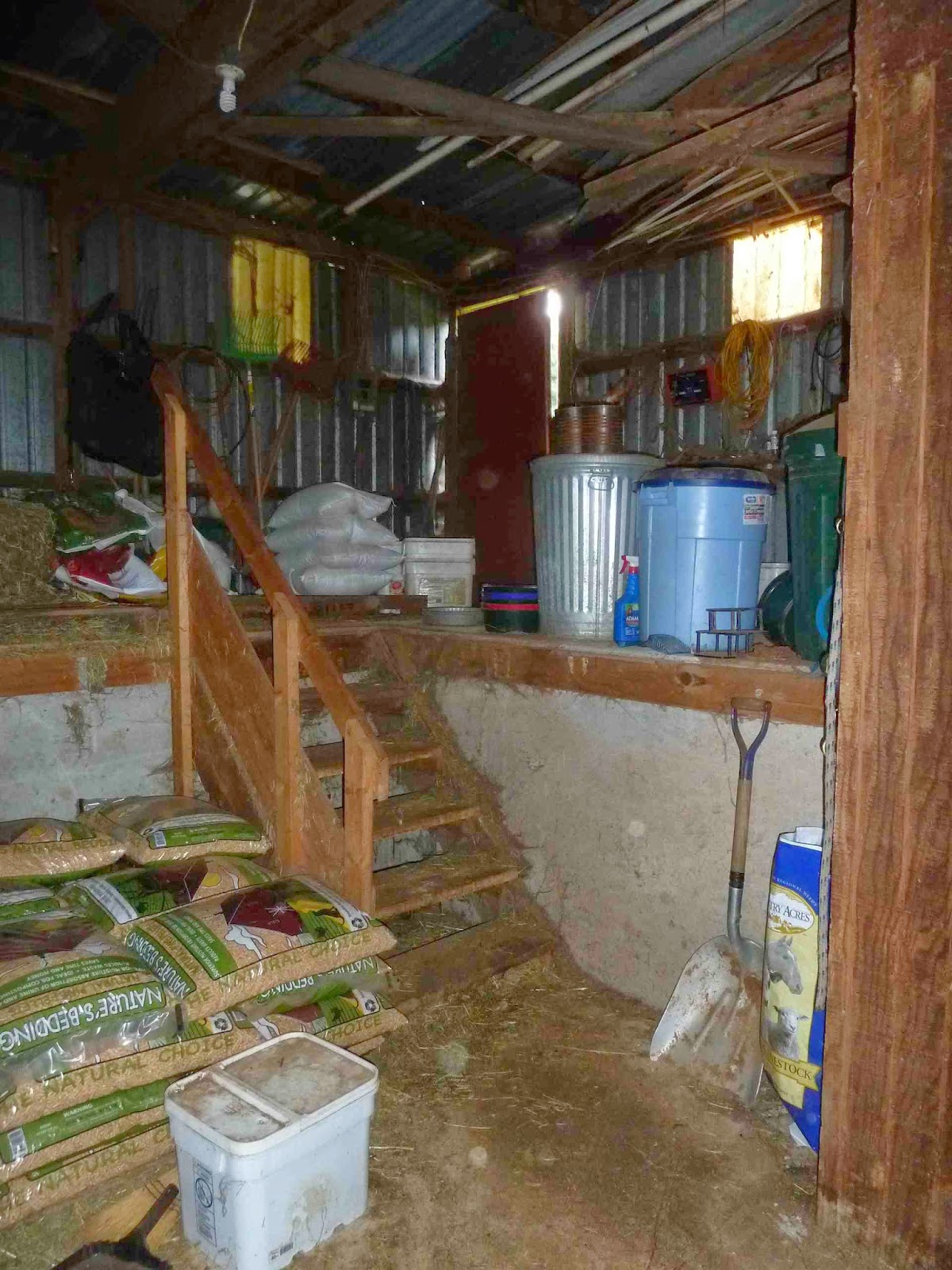 Our barn is kinda funky; it's a two-level affair. When we bought this place, there was a wooden 'room' built out level with the concrete; once upon a time it had been a marijuana grow room. We tore it all out, poured a concrete floor on the lower level, built the stairs and a tack room (the corner is visible on the right side of the photo). Keeping the grain and feed bins on the upper level adds a measure of safety that has become even more important since Lance joined the family!
Posted by Michelle at 11:00 PM 2 comments:

He seems to be indicating being happiest being ridden with the Wintec, so the Wintec it is for now. I am trying to schedule a lesson/evaluation with Suzan Davis Atkinson, the trainer I've used and learned from the most. I'll take all three saddles and see what she sees and thinks; she has the best "eye" of anyone Rick or I know. (Rick has even taken her along to consult on a couple lameness exams.)

I'd better get out there and ride now, before it heats up too much. We're going from needing a fire in the wood-burner to stay comfortable on Sunday, to highs in the 80s by Thursday!
Posted by Michelle at 11:28 AM 1 comment:

In my last post I said that Lance had checked out good to go. I didn't mention that I'd also asked Rick to ultrasound Lance's neck, and he thought it was a good idea. Unfortunately, between Rick being out of practice, me not wanting him to shave Lance's neck before a show, and the horse's challenging cervical anatomy, Rick was not able to successfully image anything.

Why ultrasound Lance's neck? Recently a blogpal posted about her mare's off-and-on lameness. You can read her post here, along with my comments. After that dialogue, I couldn't help but think of Lance, who had a suspensory injury before I got him, and then another one in a different leg recently. Could he have a neck or back problem?

Recently I've also noticed a subtle change in Lance's back profile. It's not tender to grooming or palpation, so I wasn't sure it was significant, but still....

Two other horse blogs I follow talk a lot about listening to your horse, and I've been trying to be more attentive. With that in mind, along with the back anomaly and my own comments on Mary's blog, I went down to ride Lance yesterday evening. I went to put the saddle on, and like he always does, Lance pinned his ears and moved around, and acted like he wanted to bite me when I started girthing him up.

Now, Lance has been cranky about saddling ever since I first met him; I just thought it was a bad habit he'd gotten into with his previous owner who was known to be intimidated by him. But last night it was like my ears were unstopped and I could finally hear Lance saying loud and clear, "PLEASE don't put that saddle on me; it HURTS!" I was dismayed. How could I have been so dense?

It did seem strange that Lance only expresses discomfort at saddling. He has always stood calmly for mounting, not dropping his back or moving away, and is never cranky under saddle. I decided to go for a short ride while trying to keep keep my ears open. What would he tell me?

Well, he stumbled – hard – with a back foot two or three times while we were warming up at the walk. That has happened before; not all the time, but here and there, and it's made me wonder. There wasn't anything else of note, until we cantered briefly in both directions. He wasn't comfortable going right, even though it hadn't been an issue the ride before.

I put him away, assuring him that I had heard him and would do whatever I could to make him comfortable.

In the interest of keeping my boy sound long-term, though, I made the decision to pull him from the Mother's Day show. If his back has been uncomfortable for awhile, it's not going to be instantly okay and he's not going to stop "guarding" immediately. If he's guarding, he could strain something again. Nope; not going there. We'll take things slowly, and enjoy the journey.
Posted by Michelle at 12:23 AM 4 comments:

Woot; I can RIDE!

In spite of Dozer's “help,” Rick ultrasounded Lance's injured rear suspensory again today, and gave us the green light to go back to regular riding and schooling.

We'll start preparing c-a-r-e-f-u-l-l-y for the Heart of the Valley show on Mother's Day.

Don't tell anyone that I asked for just a wee bit of trot and a canter depart in each direction yesterday just to see if the "buttons" still worked. They do. ;-)
Posted by Michelle at 7:36 PM 6 comments:

It was a busy day about the place yesterday, and I didn't have a chance to ride Lance until the last hour of daylight. We had just started walking in the arena when Rick came in with a backpack sprayer. He had been threatening to spray the whole thing with RoundUp, and was there to act on it. Boo, hiss; Monsanto has lied to everyone about the safety of this herbicide and I've read enough of the independent research to be very uncomfortable with its widespread use. Lance and I exited, stage right.

We headed up the driveway and down the lane, taking a detour into the lot for sale beside us. As we were leaving the lot, two vehicles pulled into the next lot, where a 12,000 sq.ft. winery is being built. The vehicles' headlights startled Lance, but he recovered quickly. Then, as we proceeded down the lane and he saw for the first time all the big equipment and changes to the terrain, he grew nervous. All of a sudden he bolted. A one-rein stop put an end to that, thankfully, and Lance seemed to settle down as we continued down the lane and the rest of the world was as he remembered it.

We crossed the paved road and continued north along our gravel road. It was a beautiful evening and I was enjoying the scenery. All of a sudden, Lance's back bowed up under me and he launched into the air! As my helmet sloshed around on my head I thought, "This is NOT adjusted tightly enough." There was a pause in the action and in a nanosecond my options and their consequences flashed through my mind. If we continued our route would immediately take us down a fairly steep, short hill; I didn't like the prospects of riding a bucking horse down hill. But I didn't want to turn around and head home, lest Lance connect the dots and think, "Hey, I acted up and I got to go home!" For the same reason I didn't want to get off and lead him, although I was sorely tempted for safety's sake – both of ours. (Lance hasn't received clearance from his vet to do more than walk; I'm pretty sure bucking and bolting aren't approved activities!)

I made him move his feet where we were at, rated his tension too high to proceed, and headed home with my rear planted firmly in the saddle, determined to give him plenty to think about. There were occasional eruptions, sometimes upward and sometimes forward, but I kept Lance between me and the ground and we got home safely. Actually, thanks to the fancy F.I.T.S. breeches that Rick got me for Christmas, I never felt in any real danger of parting company with my mount – but partly because Lance never committed himself to unloading me.

It was like riding a totally different horse, though; Lance is sooo quiet and steady in the arena, and has been a rock on the trails and at the beach, too. At our last local dressage meeting, our guest speakers were the trainers (husband and wife) for the Portland Mounted Patrol. As they described the type of horse they have learned works best for the job (the Patrol is now mounted exclusively on drafts and draft crosses), I told my friend Sylvia (Cohort's owner) that Lance fit the bill exactly. Now I'm not so sure (NOT that I was looking for a new home for him!).
Posted by Michelle at 1:42 PM 7 comments:

What a week we're having, with the warmest days since last September!

I didn't have a chance to ride my boy on Monday, but I did drop off his broken bridle to see if it can be repaired well enough to use for trail-riding. His sheet, which had slipped off Lance's hindquarters and gotten stepped on, was deemed beyond repair. Fortunately Robin had some nice used sheets available and I picked up a replacement for $30. I like to keep a sheet on my horse because it reduces grooming time. Less grooming time = more riding time!

In order to ride yesterday I did it first thing in the morning. My husband and son are not up-and-at-'em types, and I waste a lot of time and energy nearly every morning trying to get a reluctant son going on his chores and school (I've come to accept that motivating my husband is not my job). So yesterday after feeding and watering all the animals, I rode. It worked out great; I may do that again this morning as soon as I post this. Lance clearly enjoys the chance to get out and walk; he nickers and bangs on his stall door on the days he hasn't gotten out.

Rick's still not sure if Lance will be up to showing in May, but I'm holding out hope. Yesterday I emailed the secretary of the Mother's Day show to see if it's filled yet, and told her I was waiting to see if my horse is pronounced sound enough to show. She told me to attach a note and send in my entry; she won't charge me a cancellation fee if I let her know by the closing date. Yay for possibilities and considerate show secretaries!
Posted by Michelle at 7:02 AM 3 comments:

This morning I noticed that Lance had broken the "tongue" off one of the clips, but since it was on his neighbor's door latch, I wasn't too worried. 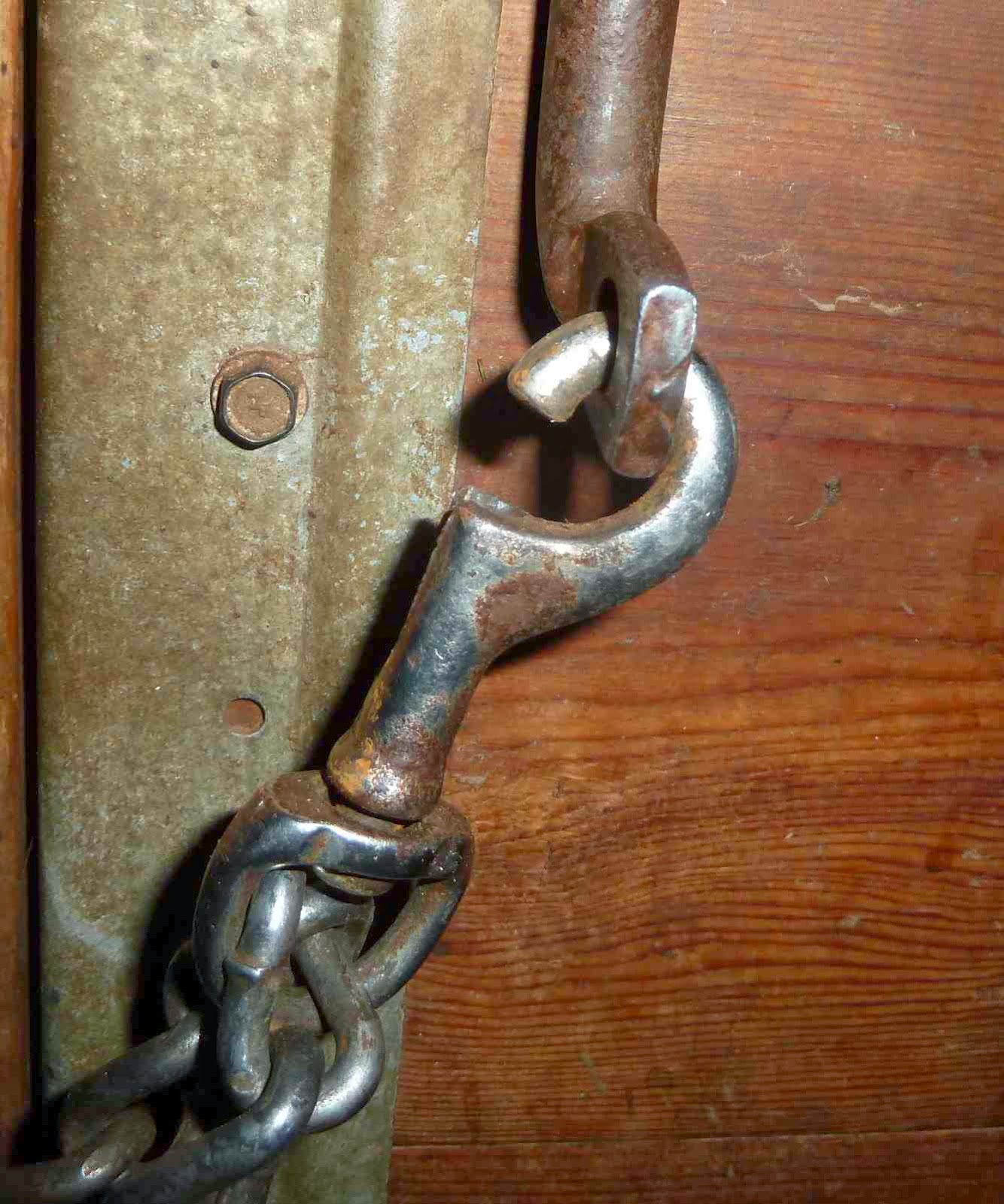 That was a mistake. This is what greeted me when I got home this afternoon: 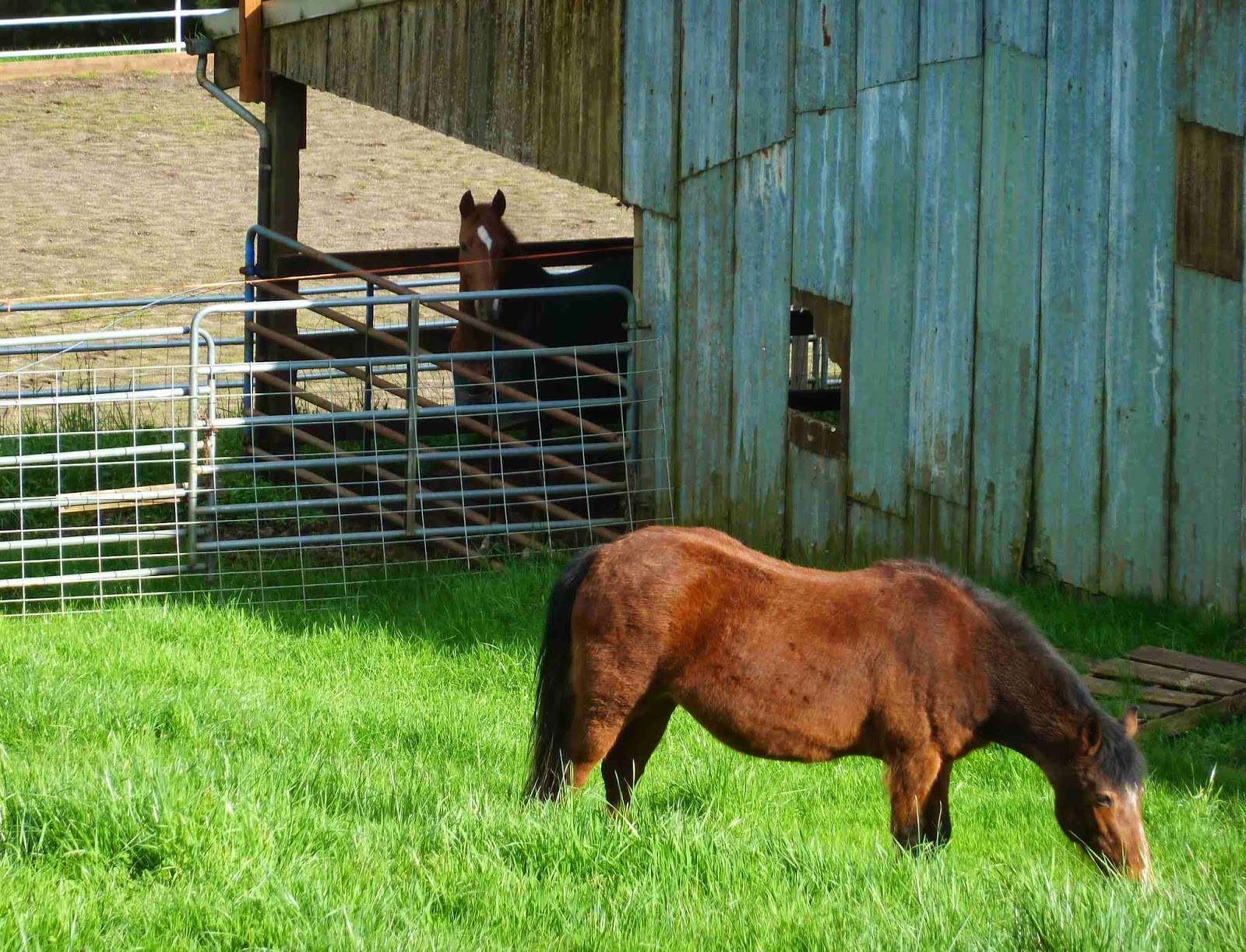 And yes, Lance and I got to go for our walk in that beautiful sunshine. Rick said we could increase our time a bit, and I've been throwing in some leg yield and turns on the forehand and haunches. It's good to be in the saddle, even at just a walk!
Posted by Michelle at 9:58 PM 2 comments: