Between the heat and Lance's lack of energy, my motivation to ride has gone out the window. Well, that's not it exactly. I want to ride, but I feel like I'm abusing my horse when the effort seems so much for him. It looks like we are going to Cowboy Campmeeting, so now there's no extra time to squeeze in a ride on top of getting ready for a big trip on top of work and chores and watering everything constantly. This evening I could feel myself getting agitated, and recognized it as riding withdrawal. I'm thinking about getting up with the sun in the morning to squeeze in a ride before work. We'll see....
Posted by Michelle at 10:41 PM 1 comment:


To say that I'm not excited about hauling, camping or riding in that heat, especially 4000' higher than where we live with an already breathing-impaired horse, would be an understatement. I'm hoping Rick agrees to just stay home . . . but am not holding my breath.
Posted by Michelle at 6:35 PM No comments:

A hole in the herd heart 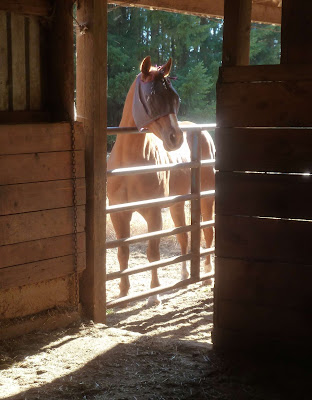 We picked her up exactly six years ago, just in time to take her with us to Cowboy Campmeeting. From the start Brian liked her, but Ollie loved her; Breezy was HIS girl. His high-pitched whinnies and frantic searches around the pasture are making a hard thing harder....
Posted by Michelle at 8:38 AM 12 comments:

What a great time we had last Sunday! Ten people showed up for our group ride at Perrydale Trails, five of them experiencing this wonderful facility for the first time. We almost had perfect pairs within our group – there were two Tennessee Walkers, two mustangs, two Welsh Cobs . . . plus three quarter horses and one appaloosa. (There is a geeky side of me that gets off on things like that. (-;  )

It was delightful to finally meet blogpal Alanna IRL (in real life), along with her dream-come-true Cardi baby, Emi. Since Emi is only two, Alanna led her through, over and around the obstacles, sometimes with a little help from her friends. BFF Kate said her mare (Dinah, Lance's girlfriend) was pretty amped with so many horses around, but every time I saw her she was being a total star. Lance was very good, too – except when I ponied Emi through the big water crossing. Then he totally surprised me by getting downright cranky about having Emi that close; strange, because he's been mild-mannered with every other horse he's met that I've seen. 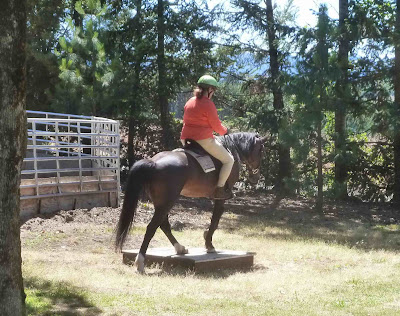 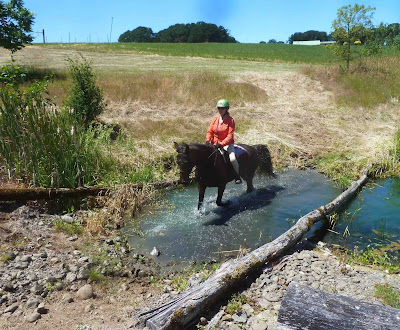 There were several new obstacles, but the scariest of them all is still the mister. I think it is the hissing sound it makes as much as the moisture, but Lance is definitely not a fan of water on his face. We finally made it through, though! 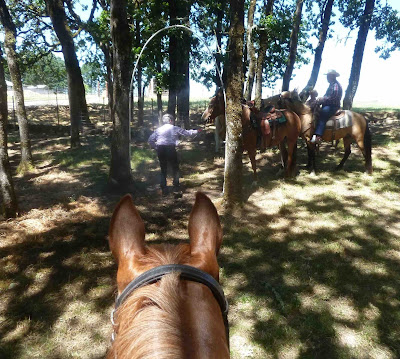 I've ridden once in the arena and twice out and about on the hill this week. We won't get out today because of Father's Day and its various activities, but I don't have to work tomorrow so maybe we can get out while it's still cool in the morning.
Posted by Michelle at 6:22 PM 4 comments: 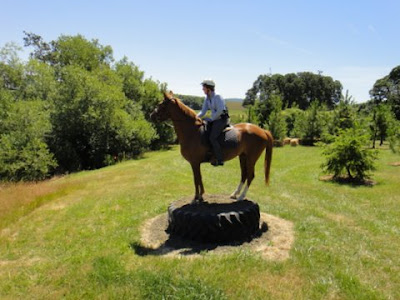 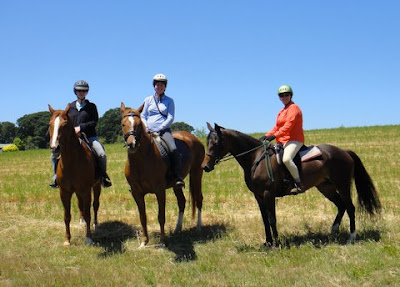 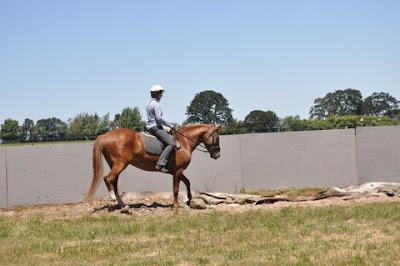 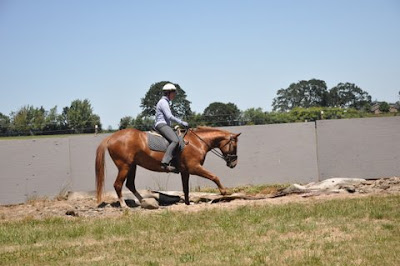 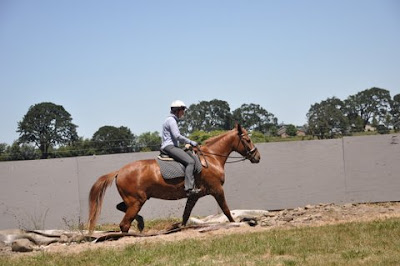 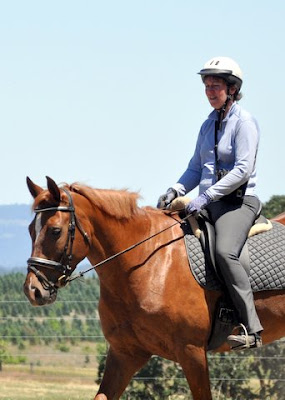 Perrydale Trails creator Rebecca Herron sent these; she takes photos of every visitor. I'll share some from my camera when I get the chance to edit them. Off to get ready for work!
Posted by Michelle at 8:00 AM 3 comments:

The early bird beats the heat

Hi all! Do you like it HOT? Come on over; summer is sitting on us hard. Our grass is already turning brown and the hoses are in constant use. But mature grass also means the horses can be out all day without worry of founder, so that part is nice.
Kate and I were scheduled for concurrent lessons with Julie at 9:00 Sunday morning, forecast (and fulfilled) as the hottest day so far this year, and it was already plenty warm by the time we started riding. But we both had excellent rides with dance partners who tried really hard, so it was worth it. I even have photos! I took some of Kate, and Julie took some of me.

We worked on so many things that I don't want to forget – especially when I can't school in our dry sand arena. So for my own benefit, here are a few quick notes:


Julie's mom Suzi, who is a USDF L judge, came out to the arena near the end of our lesson. Lance and I were working over four ground poles in collected trot – baby passage! Suzi commented that she has never seen a horse exhibit so much difference from their natural way of moving to an upper-level frame as Lance did; that was pretty incredible to hear. Lance can dance; it just takes a LOT of riding – as in effort, not time – to get it. But like Kate said, it is only fair that the rider put in as much effort as she expects from her horse....

After that much effort, I was looking forward to going home, turning Lance out on pasture, and taking a cool shower. But my husband had other plans; you can read about those on my farm blog.

I'm looking forward to riding out at Perrydale Trails this Sunday with friends. The temperature is supposed to moderate by then; hallelujah!

Throwback (to the future) Thursday

Alanna often does this Thursday feature, and I decided it would make a good opener for a catch-up post.

We got some rain, so this week I've been able to school in our arena again, after two weeks of road rides. Lance is also breathing normally this week, throwing a lot of suspicion on airborne pollens. Last Saturday we went out as a family, my guys on their bicycles and me on Lance. Lance was breathing hard after I lead him the short distance (uphill) from the barn to the house, and needed rest breaks on our ride around the hill. I was glad Rick got to see just how affected Lance was; he agreed that something was wrong. So when I indicated I was going down to ride in our now rain-watered arena Tuesday evening, Rick came down with his stethoscope to investigate further – but there was nothing to investigate. Lance's breathing was normal.

Anyway, I'm going to take a lesson with Julie again Sunday, along with Kate. It's supposed to heat up dramatically by the end of the weekend, so we are going to ride in the morning. Then I'll likely be back to road-riding until the next rain comes, whenever that is.

The following Sunday our Christian trail-riding club (and anyone who wants to join us to get the group rate; email me!) is meeting at Perrydale Trails. Kate is coming, so we'll have great fun together. We might even bug off to the beach the afternoon before, after I get home from church. My guys will both be out of town; while the men are away, the girls will play!
Posted by Michelle at 10:05 PM 5 comments: