I can see more clearly now...

...the rain smoke is gone. Still hoping for a good, cleansing rain, but at least Lance can exercise again!

It's tough when conditions prohibit applying the best recommendation (30 minutes of forced exercise daily) for one condition (Equine Metabolic Syndrome) because of another condition (Inflammatory Airway Disease). Exercising Lance when the particulate matter in the air from wildfire smoke was off the charts would have been devastating to him, so my meaty mustang just hung out. Thankfully, his breathing didn't seem impacted by the air quality.

Now that the air quality is much improved, we are back to work. I planned to climb back on last Thursday, the first cooler day in ages, but the smoke was actually worse, if possible. On our way back from Salem (DS had wisdom teeth removed), this was the view west towards the hill on which we live; couldn't ride in that! 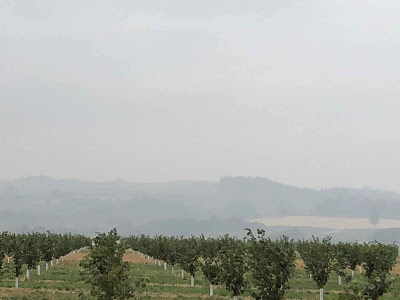 But Friday was much clearer, so Lance got the whole enchilada – a thorough grooming, a photo shoot to document his current condition, and a sunset ride about the hill. 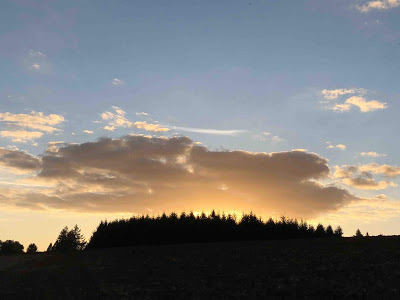 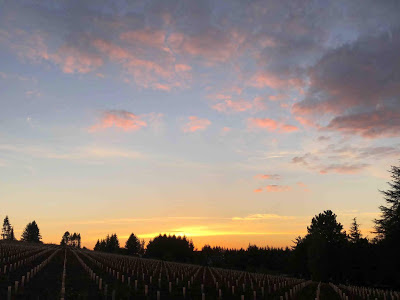 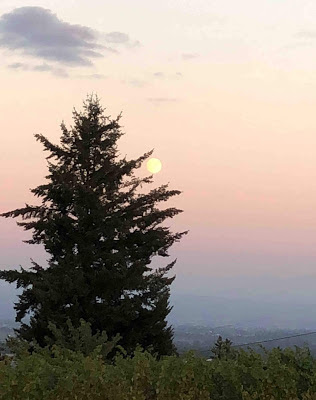 About that lump on his jaw. I first noticed it at the end of the apple-eating day of the last post; when I mentioned it to Rick he joked that it must be apple poisoning (he thinks I'm a "horse hypochondriac"). When the hard, tender lump didn't improve, I finally got him to x-ray it. Rick couldn't see a fracture, so apparently Lance bruised it badly somehow. It's still tender but fortunately sits behind the bridle's cavesson; Rick said it may never go away. 😕 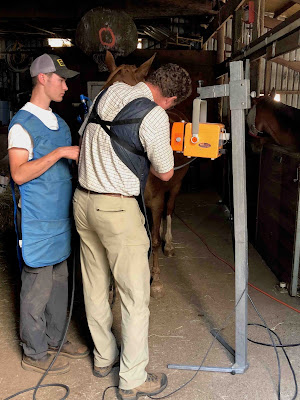 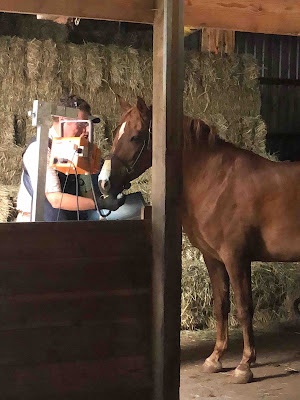 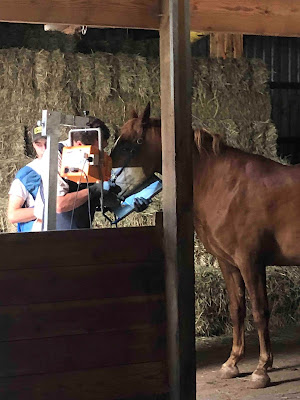 We rode again Sunday and Monday. After last night's ride, I timed his respirations for the first time in months – perfectly normal at 10 RPM. Unfortunately, he also stumbled dramatically at the beginning of our ride, so we just walked up and down hills to minimize momentum.

In other horsey news, during last week's lesson my youngest student got bucked off her Haflinger. The mare was protesting the canter depart (I think she's uncomfortable) not trying to unload her, but it really shook the student's confidence and I don't know yet if she'll be continuing lessons. With Brian back in school as of today, I'll have to figure out a different time to teach students 2 and 3 (if she continues) anyway; gotta pick up the boy from school every afternoon.

Tomorrow I'll be picking him up early so he can drive in the state fair's draft horse show again. On Sunday he won the youth driving class with a wagon and team of two; tomorrow he drives in the youth cart class. I'll post photos of both his classes when the dust settles.
Posted by Michelle at 10:46 AM 3 comments:

Yesterday our local dressage chapter got together to visit with one of our former members who moved to South Carolina (the mother of trainer Julie, who also moved to SC). I brought her up-to-date on Lance and mentioned that I was cyber-window-shopping for retiring TBs after being swayed by students' mounts. She has had several OTTBs and had nothing but good things to say about them, even though she has also had some lovely warmbloods. I was pleasantly surprised, and encouraged in my daydreaming. 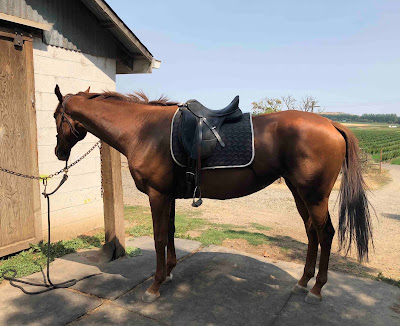 Today student #2 had a lesson with her OTTB mare (above, after lesson), and towards the end of the lesson asked if I wanted to ride her. So I borrowed a helmet and climbed on in my jeans (I was wearing my paddock boots), and once again had a "color my day happy" experience. So everything seems to be nudging me in a certain direction . . . except a resistant husband. 😒

Said husband and DS have worked very hard to create beautiful permanent fencing around our upper pasture (keep in mind we have a total of five acres, so each of our three pastures is pocket-sized). When I expressed concern about my two loaded apple trees at the north end, they moved all the assorted panels we have that aren't enclosing the arena and made a barrier to protect the trees (and my horse from foundering on them!). This morning the horses got to go up there for the first time since work began. When I got home this afternoon, Lance and Ollie were standing around the one apple tree still available to them. Oink!


And here are the two trees that are protected: 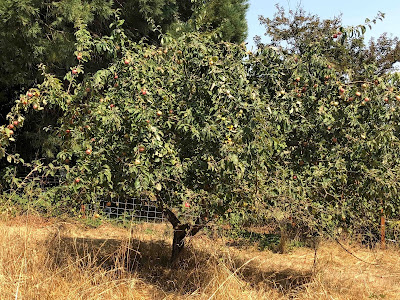 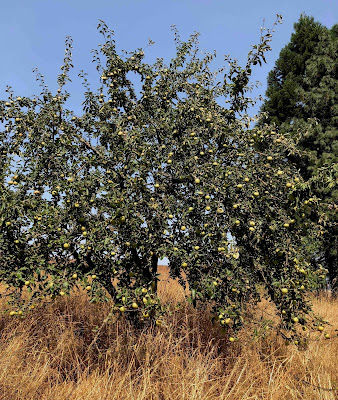 I need to starting picking from that first tree and putting up applesauce!
Posted by Michelle at 7:47 PM 3 comments: 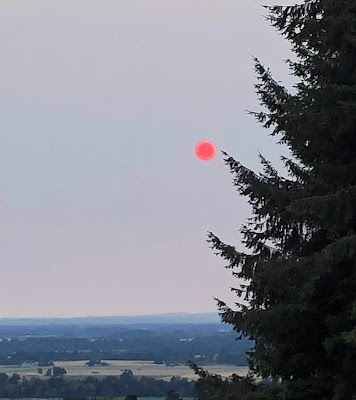 This morning it was so dark I thought we had cloud cover. But no, the sun was up, just dim and blood-red because of "smoke from a distant fire." All that particulate matter is hard on the young, the old, and those with compromised lungs – like Lance. Not that we would ride hard, because it's been so hot. Not that we could ride hard, for fear of tripping. Sigh....
Posted by Michelle at 11:32 AM No comments:

Yesterday I took a road trip with a friend to deliver one of my Shetland sheep to Auburn, WA. We were going to be so near Emerald Downs, where there are a number of retiring racehorses looking for new homes and careers. Wouldn't it be wonderful to take a look at some in person, particularly the two below? 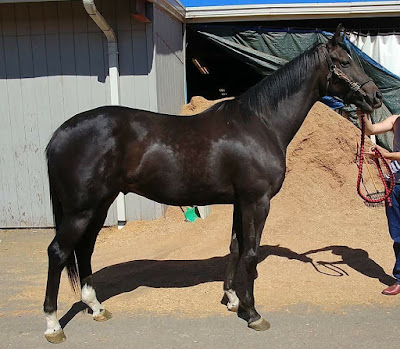 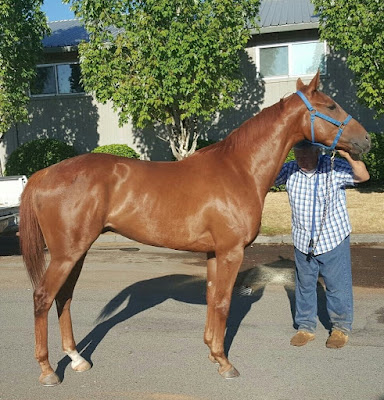 But it was not to be. Tuesday was best for sheep delivery but the only day no one is available at the track. Guess I'll just have to wait until this fall/winter when the "point woman" for retiring TBs is at Portland Meadows. I think that will also be a more auspicious time for a cooperative husband....

Wednesday is lesson day for Student #1. Last week she asked if I wanted to ride her lovely OTTB but I wasn't dressed for it. Today I planned to dress for riding, just in case – and then she sent me a text asking me to come ready to ride.

What fun! Carl is a typical "wet-noodle" baby horse, still learning how to use his body in response to a rider's aids, but he's willing to try and easy to direct. And he's as lovely to ride as he is to watch. On my way home I realized I had that "top of the world" feeling that a good ride gives you – and also realized how long it's been since I've experienced it. Non-horsepeople would doubtless think it silly that one's entire day can be colored by how well or how rough one's "dance" with a horse goes, but those periods of communication, harmony and balance are pure magic – a magic carpet ride.
Posted by Michelle at 4:26 PM 5 comments: