Spring things in the air

Ah yes, 'tis the season for pollen and horse hair. My eyes have been itchy and Lance has been struggling to breathe, poor guy; we've had to add dexamethasone to his meds to try and quiet down his heaves. Good thing I have another horse to ride!
That would be Stella, the shedding one, stepping up to keep my riding muscles in shape. We're still just walking around the arena, but the fact that I can saddle and bridle her and ride is pretty thrilling. Of course, we do that after she gets turned out to expend her youthful energy 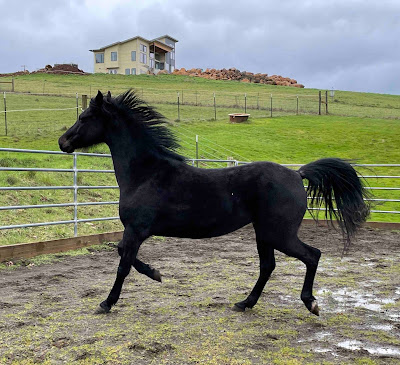 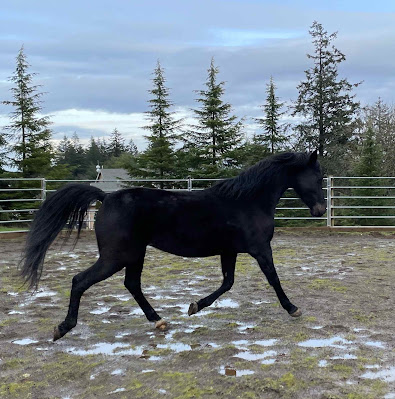 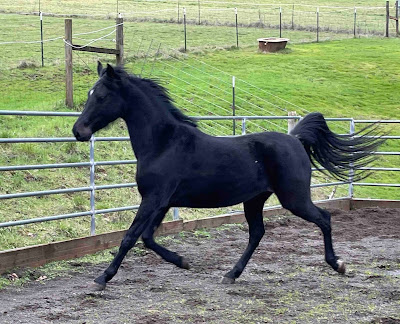 and we check in with at least a little groundwork. Last night I rode her at dusk; it was our first warm spring evening and she was really good – even after Ollie snorted and she did a startle-squat!

Today was a different story. She pulled back hard a couple times when I was grooming her, and as I started to bridle her she exploded, bucking and plunging in her paddock. I have NO idea where that came from; she acted like a bronc that had just been girthed up for the first time. She almost came over me to get in her stall but thought better of it once she was up in my face; I was bracing to get trampled on again and was very thankful to avoid that since my thigh still isn't 100%. I was also afraid she was going to bust her beautiful bridle; I had the reins around her neck so when she jumped the bridle dangled off her side where she could have gotten a hind foot through the headstall (but didn't). After all that I decided that today might not be a riding day. It was blustery and cold with a lot going on on the hill noise-wise; a good time to just work on our partnership and try to land my kite. 😉

Lo and behold, after awhile her brain came back and I was able to get on for another walk! 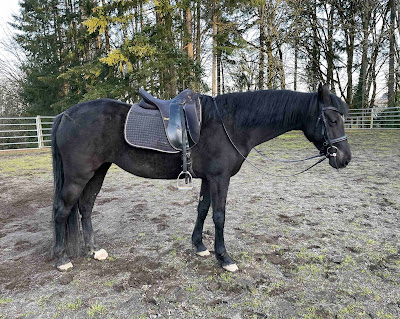 Just looked at my last post to refresh my memory; goodness, a LOT has happened since February 17! The next day I went back for that check-up (after getting my second COVID shot; hurray!), and the doctor pronounced me cured! He was surprised that I followed his orders; he said most patients don't. But because I did, the swelling was gone and I was released from all restrictions. The area is still a bit tender if bumped and twinges on its own occasionally, but that should go away eventually, although he said it may take six months for the surface numbness to go away . . . if it does.
So of course I went right back to working my horses. But first Stella got some turn-out time to let off steam after being cooped up because of my stall rest and the ice:

Sometimes I feel like I should – and could – just get on and start riding her, and 30-40 years ago I'm sure I would have. But between those moves and energy, and my age and working at home alone without the benefit of a round pen, it seems unwise. So I continued with all kinds of groundwork and ponying her off Lance . . . and got an idea. Why not have someone pony me on Stella off Lance? I mentioned it to my husband, who responded that he wouldn't trust Lance, so I turned to Lisa again. She thought my idea was a good one and agreed to come out to help me, so two weeks ago she did just that – and more! After ponying us for a bit and seeing how relaxed Stella was, Lisa unclipped her extra lead and I continued to ride beside her and Lance using the rope halter and its lead tied around as a loop rein. She did great and I was so pleased! 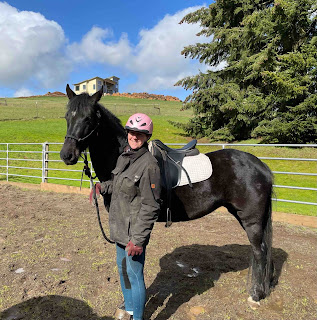 Before fast-forwarding to our next session with Lisa today, insert a little online shopping. At one of our long-lining lessons with Suzan last fall, she recommended a Nathe bit for Stella. I've looked on eBay off and on since then, trying to find a deal because they are expensive, and I hated to spend money on an unknown. Finally I texted Suzan; "How confident are you that a Nathe bit would be the best option for Stella?" Her response was "100% and if not I will sell it for you." Well! I hit the "Buy Now" button and it arrived on Monday! 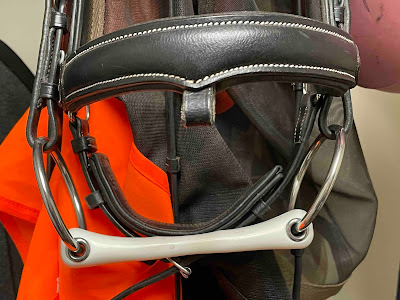 Here it is, in place of the double-jointed snaffle I have been using for Stella. She wore it under her rope halter for ponying and groundwork yesterday, 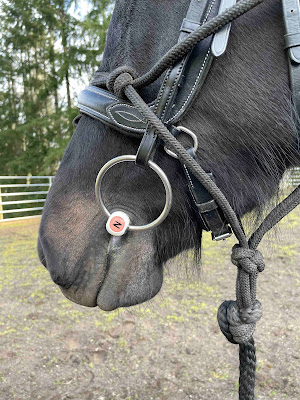 and again today when Lisa came to help us again. I had already ponied Stella off Lance for ten minutes when she arrived, so we didn't do much more ponying before she turned us loose. After riding with her for awhile, she stopped and we rode circles around her and Lance, using the 'reins' along with the halter's lead rope to get her used to the bit in action. Stella was again very good, responding calmly to a squeeze of my legs to walk, gentle direct rein to turn, and a verbal cue plus body position to halt. Before long she grew more confident and started testing me a little, so we refocused with some turns and stopped on a good note. Stella's a smart mare; I'm going to have to keep things short, sweet, and interesting!
Here are some video snippets Lisa took of us, a couple of blurry screenshots from them – and a photo of our helpers. 😁 It really feels like we are making strides now after more than a year of baby steps. Lisa suggested tying Lance in the arena as a babysitter if I feel like trying to ride her alone. We'll see how that goes. 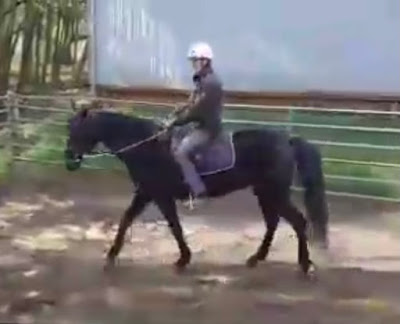 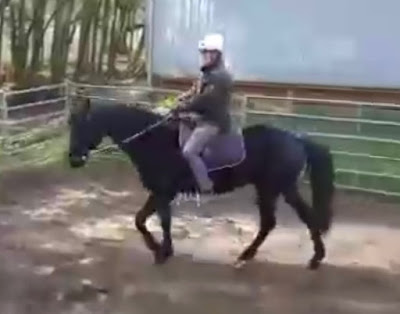 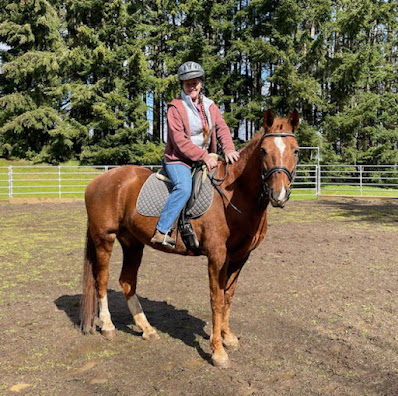