On many fronts not much has happened since I last posted here. My new student hasn't been back yet due to other commitments and bad weather. I haven't done much more with Stella due to bad weather and now stall rest – mine, not hers. And with that, I'll segue into what has happened....
Because of all the rain we were getting, I started ponying Stella off Lance again. That kept both of them exercised a little and kept me from getting soaked. On January 19, I put the body wrap on Stella, saddled up Lance, grabbed the flag, and headed to the arena. Stella was feeling a little frisky from not getting much turn-out (when there are puddles, she DIGS; NOT good for the footing) 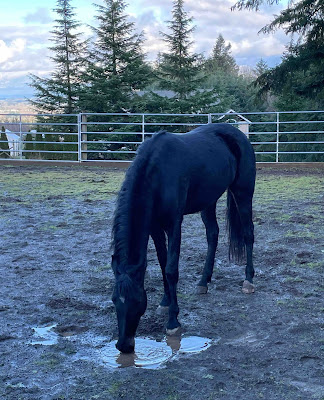 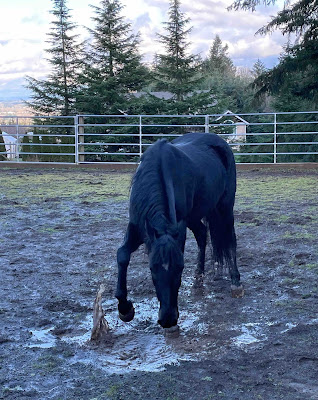 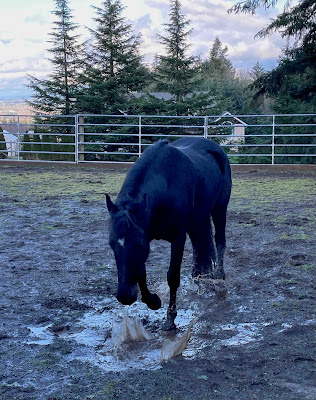 which made Lance cranky. She frisked, he reacted at her, I corrected him while inadvertently swishing the flag (which he isn't used to; oops), and off he launched towards the arena fence. Deciding that I'd rather bail before we reached the metal panels rather than possibly getting thrown into them, I let go of Stella's lead rope – but not Lance's reins. My split-second reasoning was to prevent Lance from chasing Stella down and trying to kill her, like he did last time he got loose in the arena with her. Judging by the amount of jumping around he continued to do after I hit the ground, that was precisely his desire. Unfortunately, one of his big feet came down on the back of my right thigh as I lay on my side. Yeah, that HURT; he weighs in at 1200+ lbs. But thankful that he didn't step on my femur or knee or torso, I got up, led him to the other end of the arena where Stella was standing (and stood, even though the back loop of the body wrap had slid up under her tail like a crupper; woot!), got back on, and finished our walk.
That night I showed my leg to Rick, who was concerned enough that he ultrasounded it. Even though the lump appeared to be filled with serous fluid, not a clot, he thought it best to have my doctor check it out, so the next day I did. The doctor agreed with Rick, and recommended R.I.C.E. So for the next two weeks, I iced it, wore some compression capris I got to wear under my white show breeches, and applied arnica cream and DMSO. Elevating my thigh above my heart wasn't really feasible, and rest, well.... 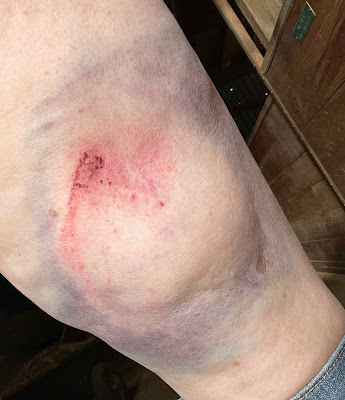 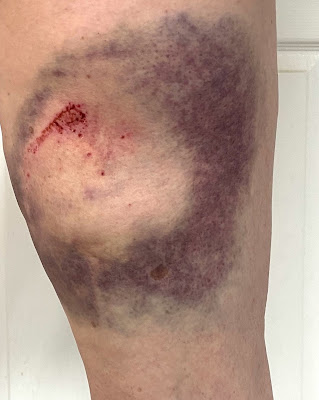 The bruising improved but the lump remained. Rick decided to ultrasound it again, called his BIL who is an orthopedic trauma surgeon, and learned I had actually sustained a type of closed degloving injury called a Morel-Lavallée Lesion. Then the search was on to find the best way to deal with it. In the end, that led us to an appointment with a local plastic surgeon last Tuesday, who looked at it and decided to drain it on the spot and tightly wrap it. (One of the characteristics of ML Lesions is a loss of feeling, so he just stuck an 18-gauge needle in it and I didn't feel a thing!) He instructed me to leave the wrap on for the next two weeks and stay off of it as much as possible; I go back for a check-up tomorrow.
In between appointments #1 and #2, we had a doozy of an ice storm. My poor husband was already doing all the barn chores, and then we lost power for three and a half days while everything was (ultimately) covered by 1.5" of treacherous ice, making everything more labor-intensive. But at least those were days I didn't feel bad (as I have all the others) about not being able to work/play with my horses!
So all of us have some ground to regain, and I hope we can get back to it sooner rather than later.
Posted by Michelle at 7:30 PM 2 comments: