Checking in with Spring

I'm still here, schooling and conditioning my pony, teaching and trail-riding with my student (and her mom), prepping and primping for our upcoming demo ride (this Friday!), and coping with challenging life circumstances better thanks to the mental and physical self-discipline of dressage. 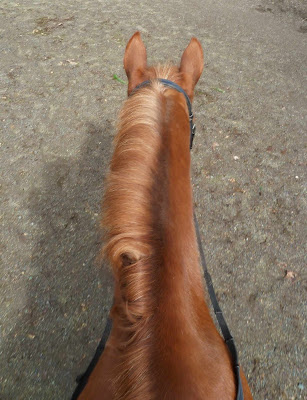 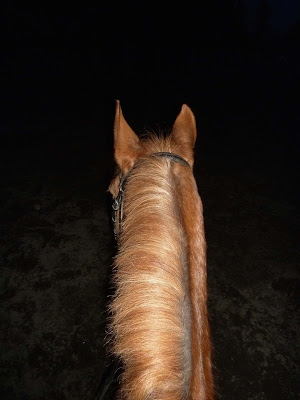 Sometimes, we even have witnesses! 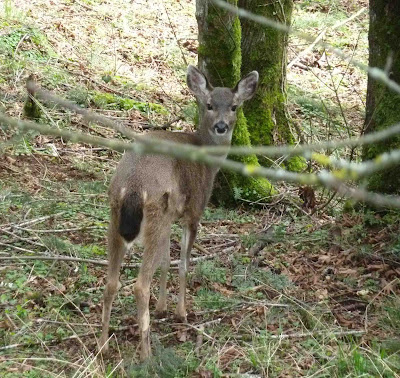 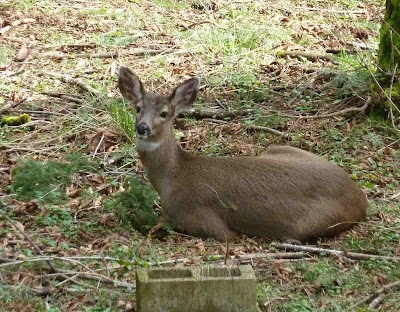 Lance and I have been working in SPITE of the weather. No time to ride the two days after our lesson, and by the time I could claim some time in the saddle on Sunday we had to brave the dark with a "wintery mix" falling. I set up my four caveletti, but Lance struggled to maintain the trot on the smaller arc that created. Note to self; remove one next time we ride. We didn't ride long; the conditions were less than conducive.

We woke up to 2" of snow Monday, but by Tuesday we were able to slosh around in the arena again.

I rearranged my poles into this "turkey foot." It gives me the three trot poles plus a high trot pole/low jump pole to mix things up a bit. 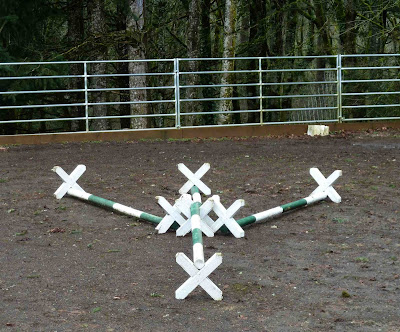 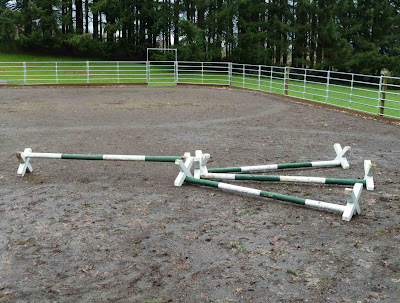 We schooled again on Wednesday, this time with company: 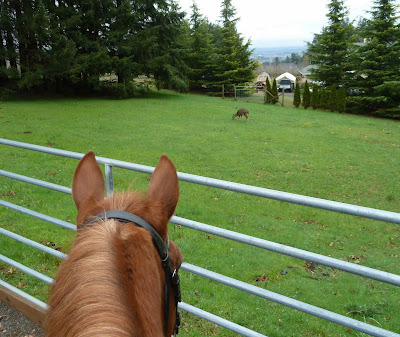 The sun is actually shining this morning, so I need to scurry through some cooking and cleaning so I can shoehorn in a ride. No time this afternoon; like every Friday I have to drive to Salem to pick up my son and take him to Newberg for a violin lesson.
Posted by Michelle at 8:32 AM No comments:

Lance and I had a lesson with Julie on Thursday. As soon as she saw him, she remarked that he had regained some weight; it was nice to have confirmation. I had already warmed up, so we went to work. Julie specifically brainstormed exercises that would maximize our benefits for the amount of energy expended, given that Lance is an energy-conserver at the best of times and oxygen-compromised at the worst of times. One of her suggestions was to capitalize on the energy he offers when I shorten my reins, and when he needs a break (often), use it to practice free walk on a long rein – no in-between.

I've been feeling confident that in spite of the set-backs, Lance's training has slowly progressed; our lesson confirmed that, too. His walk-canter-walk transitions have gotten more dependable, so we worked on refining them. Using the whole arena and doing simple changes from one lead to another, Julie had me ask for a bit of opposite leg yield before the downward transition to get him straighter.

Then we worked on making Lance's trot more adjustable by working over three trot poles laid out like bicycle spokes. Taking the inside track requires a shorter, more collected stride; taking the outside track requires more energy and reach. Lance hardly placed a hoof wrong, rating himself extremely well and requiring the outside ends of the poles to be spread farther apart to challenge his surprisingly large stride. Then she had me use the physical advantage the poles gave us for downward and upward transitions right after and right at the last pole.

Finally, we worked on adjusting Lance's canter stride on the circle without poles, using the open side of the circle to lengthen, then asking for collection when approaching the side of the arena. Julie said that she saw Lance truly "sit" for the first time during this exercise; exciting stuff!

Julie had me shorten my stirrups a hole because of my tendency to ride with my legs too far back and not keeping good contact with the stirrup pad. She really liked my hand position; I'm getting better at pushing them forward instead of pulling back.
Posted by Michelle at 10:54 PM 4 comments: