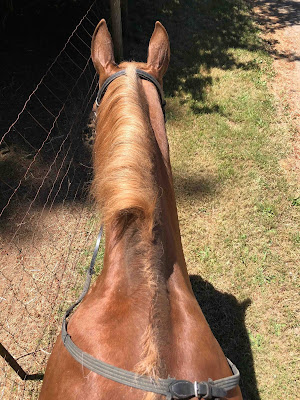 This horse o' mine, he has my heart. Even though we really can't "dance" anymore, we can still enjoy our walks – and so can others.

On Tuesday morning some neighbors brought their visiting granddaughter over to ride Lance. I ended up giving her a little dressage lesson and she did very well. 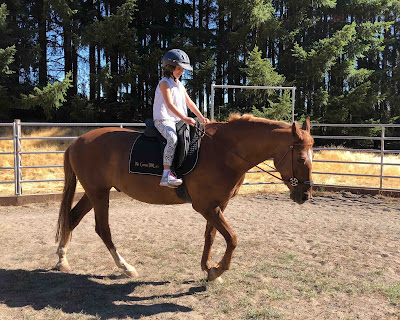 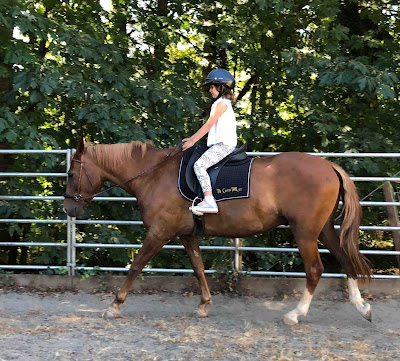 A friend of mine who is recovering from a broken ankle may come over and ride him to "get her legs back." He's steady enough that she'll feel safe, while I tune up her mare with some schooling rides.

So I may be window-shopping for another horse, but my buddy isn't going anywhere. Tonight we rode around the hill after sunset, enjoying a cool(ish) breeze and the nearly full moon.

I'm not giving as many lessons in this heat, but student #1 is available in the morning so we are soldiering on. Her horse Carl is the reason I'm considering an off-track thoroughbred: 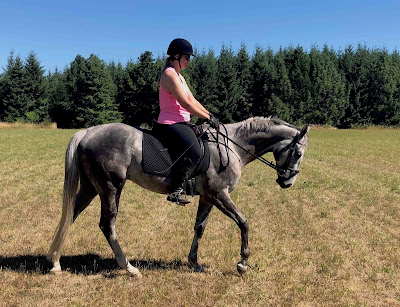 ...because I don't think Lance's genes should be perpetrated – no matter how handsome and personable he is!

My big, red goober has yet another diagnosis on his rap sheet now: metabolic disorder (the equine equivalent of type-2 diabetes). That's what the blood work indicates, so now I've added Thyroxinen L to his daily meds and supplements. Hopefully it'll help him shed some of the excess weight....

We finally got a break from the extreme heat we were experiencing, so Lance and I have resumed some activity. We rode around the hill on Monday evening, and Tuesday morning I lunged him. I wanted to see how he handled himself bitted up, even though I was worried what might happen if he tripped. Fortunately he only stumbled once with a back foot before I attached the side reins and not once after, even though I put him through all three paces. 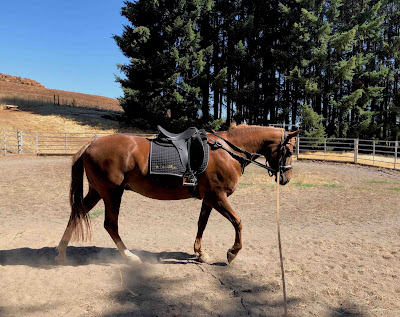 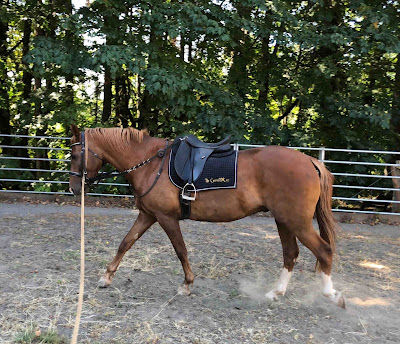 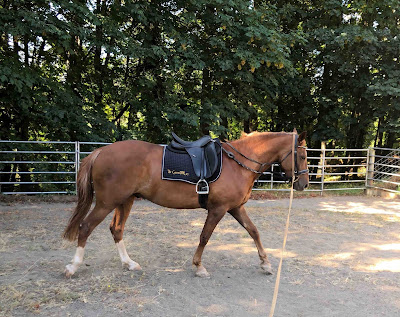 While I will continue to ride and love my mental health crisis mustang, I find myself jonesing for a horse I can dance with again. Student #1 resumed lessons again yesterday with her gorgeous, sensible young OTTB after being out of town for awhile. The OTTBs I've known in my past life didn't interest me at all, but now I'm spending way too much time perusing "Retiring Racehorses – Pacific NW" on FaceBook, dreaming of meeting some this winter when there are meets at Portland Meadows. (I'm not driving up to Emerald Downs, no matter how tempted I am!) 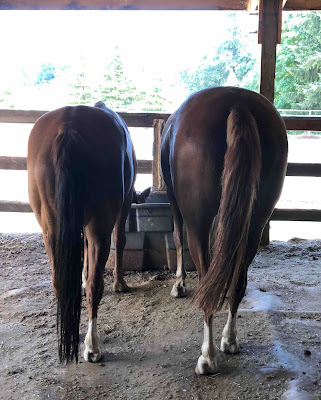 That's the tall and the short of it for now.
Posted by Michelle at 3:09 PM 3 comments:

Yesterday student #4 had her first lesson with me – on her mom's nice-looking TB mule! Eerily enough, the mule stumbled and nearly fell at the canter; so thankful the student stayed on and no one got hurt. We didn't canter after that, but had plenty to work on. The next lesson is in two weeks, and she may ride something different, possibly her own semi-retired mule. Although I've never "schooled a mule" before, it wasn't any different than a horse; I could definitely see myself on a nice-moving mule!

I enjoy working with people new to dressage, but I must admit it was wonderful teaching someone who isn't. Student #4 has shown to Second Level so is "dressage literate," making communication easy. And when she paid me at the end she tipped me $10 – the second first! We have another lesson scheduled in two weeks and she emailed me a nice thank-you later, so I think she was happy with the instruction. 😊

In Lance news, I lunged him on Sunday evening. Partly to exercise him, and partly to see how he moves. I didn't "bit him up" in case he tripped (which he only did once with a back foot), just used a halter and lunge line. He was excruciatingly lazy; don't know if it's because he's so fat or because he doesn't feel good. Rick watched him for quite awhile but hasn't said anything. 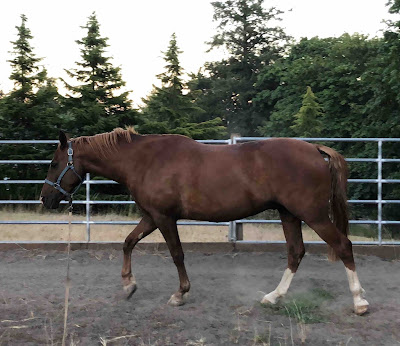 I'm headed out shortly to walk him around the neighborhood while it's still cool.
Posted by Michelle at 10:37 AM No comments:

Like my life as a whole, my horse life keeps trotting on, leaving me struggling to keep up. Since the last time I posted, Lance's feet were trimmed (no shoes), student #3 had a lesson on her own horse for the first time, student #4 scheduled her first lesson for a week from yesterday, I've seen signs indicating I'm losing even more of my riding range . . . and my options with Lance got dialed back to nearly zero. 😞 Yeah, it's been a week of "The good, the bad, and the UGLY."

The next day Lance and I took a ride through the woods. The track is getting overgrown – we were even turned back by blackberry brambles before reaching the clearing I like to ride to – but a bigger obstacle to our future access was advertised. 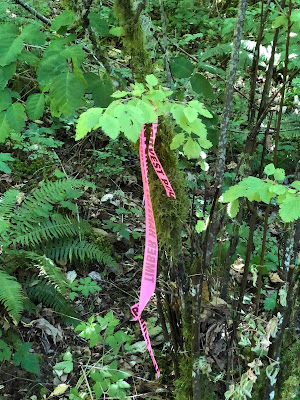 All along the track there were these pink ribbons declaring "Timber Harvest Boundary" – as if enough of the peace, quiet, and wildling habitat of our hill hadn't already been pillaged. 😔 This little wooded ravine is pretty much all the "wild" that's left on our side of the hill. But it's just money to some people.... With a heavy heart I took photos of the beauty before it's changed forever. 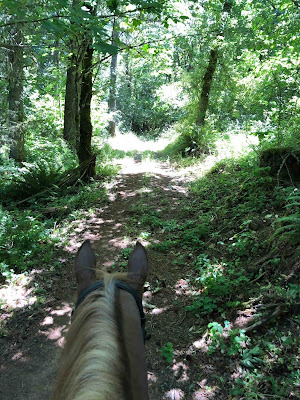 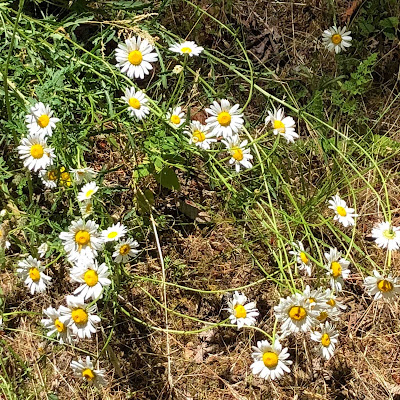 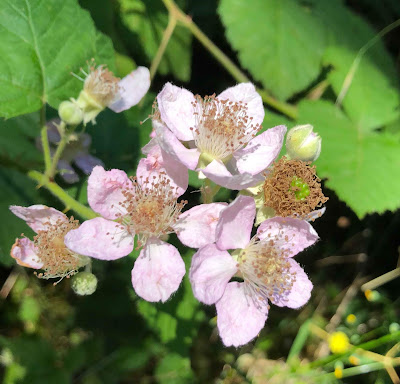 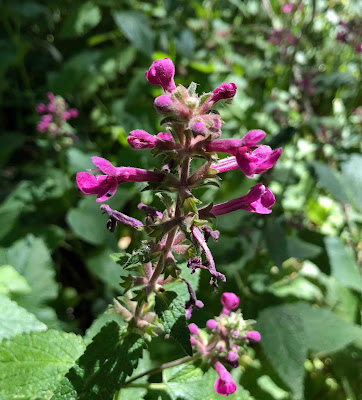 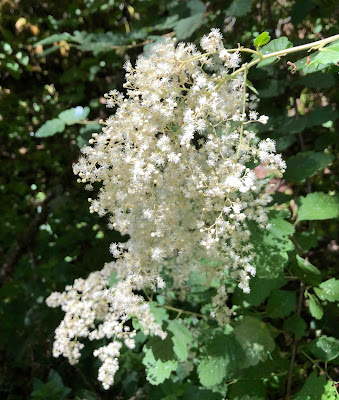 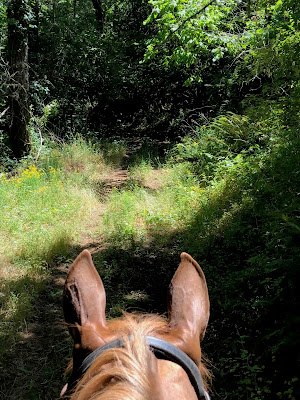 Back home I took Lance out on the ballroom floor (arena) to briefly review some dance moves. I was cantering him to the left one last time, being careful to maintain uphill balance to help avoid tripping. He's been doing that quite a bit lately, although not quite as much since getting his pedicure. But he did trip, and not only did he not catch himself, he came crashing down in a kind of delayed sequence while my mind raced through the possible outcomes. I was mostly hoping that no part of Lance's 1300+ pounds landed on me, and then hit the ground with a pretty good smack to the back of my helmeted head. I scrambled up but Lance didn't, laying sternal where he'd fallen for some worrisome moments. When he finally did get up he kept shaking his head. Taking stock of both of us I noticed that he'd skinned one front knee and the opposite front fetlock, had a scrape and a lump on his forehead, and his bridle was all dusty. (I didn't notice until the next day that the noseband was badly scuffed, making me think he did a hard face-plant into the sand or possibly even into the kick board of the arena.) My head felt okay, but my left clavicle and sternum were uncomfortable and grew increasingly so as I carefully put away my subdued mustang.

Shaken emotionally every bit as much as physically, I called Rick. He had theorized from the number of suspensory injuries Lance has sustained that there might be underlying neck issues; the stumble and fall certainly supported that theory. I told him what happened and asked him to please (finally) check Lance's neck, which he did when he got home. Lance is so thick/fat that it was hard to see much with the ultrasound; there was some inflammation, though. (He also ultrasounded my left collarbone, which by now felt like I may have cracked it, but Rick didn't see anything.) Because Lance has gotten so fat, Rick felt that testing for Cushings Disease was warranted, and drew blood for that.

So here we are, reduced to walking around our little arena or increasingly developed hill. Going faster is just too risky; there's too much momentum to recover from if when Lance trips. (I'm so glad student #3 transitioned to her own horse before this happened, and that we didn't go to Cowboy Campeeting!) I'm sad; I'm worried. I really like the whole process of dressage and don't want to be sidelined forever, but I love my big red goober and he's definitely bonded to me. So for now, we will totter around as carefully as we can. We took a slow walk on the 4th,

and then again last night to stalk the sunset: 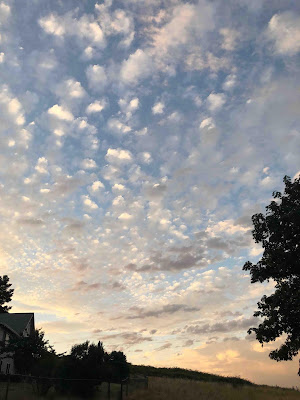 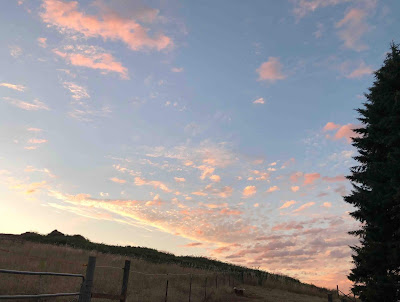 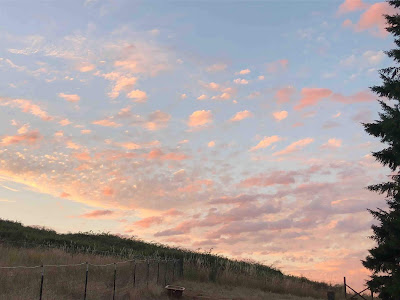 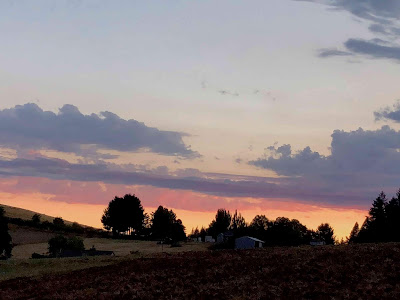 I might start lunging him to help control the weight gain. Mr. Porky-Pie needs to work off all those apples, cherries, and choice weeds! 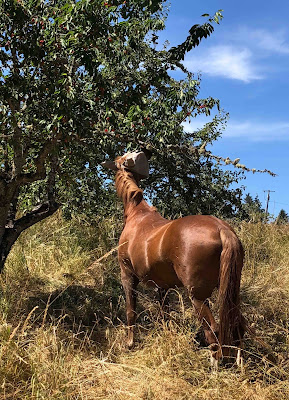