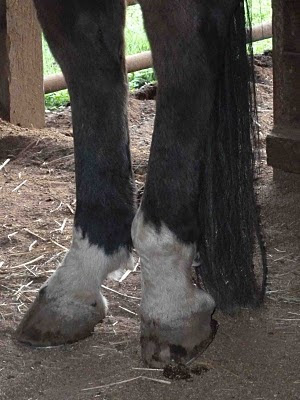 I'm less than two weeks out from my first show in nearly two years, and Russell is lame. I rode him yesterday, and noticed that he was off then. Since I can find no heat or swelling anywhere on the leg and he was just trimmed and reshod on Friday, a hot nail in that left rear shoe seemed the logical culprit - especially since that foot is warmer than the right. Good; easy fix! Except that when Rick used the hoof testers this morning to figure out which nail to pull, he came up with nothing. Rick had to go to work, Russell is more lame than he was yesterday, and today is the only dry day in the forecast (we could get 6" of snow or more this Wednesday and Thursday!). This is not looking good; not good at all.

ETA: Rick was able to come home over the noon hour to do more of a lameness evaluation. After watching Russell move and doing a flexion test, followed by palpation, the problem is definitely in the hock area and not in the foot. We'll have to wait until tonight to do ultrasound and/or x-rays. All I know is that in the nearly eight years I've owned him, Russell has never been this lame. :-(
Posted by Michelle at 9:32 AM

Oh Michelle! I am so sorry! And you where so close. I hope it is something simple and stall rest will fix.
Good luck!!