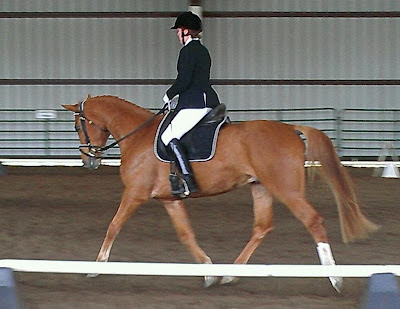 Photo during one of our tests courtesy of a friend.

After showing last Sunday, I was only able to ride twice this week – Tuesday and Friday. The other days were either too wet or too crammed full of other commitments. But I have yet to go more than two days in a row without working Larry; not a bad track record (IMO) for the 12 weeks I've had him.

Both times I rode this week, Larry had some buck in him. Just a wee bit on Tuesday; much more yesterday. Riding him through these "yeehaws," and through the spooking at the show, is re-building my confidence exponentially. I say RE-building, because historically I've been a pretty fearless rider. But the combination of becoming a mom, having dependable Russell for so long, and getting older eroded a little of that. Either that, or I'm getting a little wiser with age. :-)

Last Sunday I finally obtained a basic timeline on Larry's recent history from his owner. The last time he was shown was in 2009. In 2010 he was ridden in some clinics; in 2011 he was used for some lessons. Based on my brief history with him, that last point surprised me. Larry isn't what I'd call an "easy ride," although I've ridden tougher. At any rate, learning what I did made me feel even better about our progress so far. Onward and forward!
Posted by Michelle at 5:02 PM

Gorgeous shot of you two. Kudos for all the work you do with Larry.

Thanks, Lori. I'm posting so look a little awkward, but oh well!