Last week a friend asked how our Thursday lesson went. I decided to post it here because it helps me remember what we need to work on . . . but it's taken me awhile to find the time and organize my thoughts!

Apparently Lance and I were making progress even when our schooling sessions felt less than fine, because Julie could see a lot of improvement since our last lesson. In fact, she said Lance was the best she's ever seen him! I'm doing a better job of riding him straight and not letting his haunches come in (a common problem, particularly in the canter), which in turn improves his ability to carry himself. But I'm getting ahead of myself; let's start with warm-up.

Lance's walk almost always gets high praise. When we pick up the trot, I need to make sure it's a good, energetic trot – better to "insist" at the beginning rather than letting him slog around or nag-nag-nag for forward. Once energized, he's pretty good about maintaining it. Julie had four ground poles laid out, and trotting over them improved the way Lance used his hind legs. I really need to buy some poles….

From there we went to work. Julie had us do a lot of leg yields to check and correct Lance's straightness, adding leg-yield zigzags to our list of exercises. We continued to use "leg yield along the wall" at the walk (it's rather more like an angled side pass) interspersed between more vigorous exercises to help him articulate the use of his hind legs.

Our canter departs (first from the trot, then the walk) are a work in progress, but they are definitely getting better. The key is keeping his shoulders in front of his hindquarters, which requires working on the inside track so I can utilize a bit of leg-yield* along with lots of half-halts with the mental image of "turning the bus" with my torso and thighs (rather than letting him just bend his neck, leaving his shoulders out and his haunches in). When I get his parts aligned correctly his frame opens and his canter flows, rather than being hoppy or labored. Julie checked our straightness by having us canter down the quarter line; it took a bit at the beginning of the line to get it, but we finished each attempt in correct alignment. We also worked on smaller circles, bringing the shoulders up and around at the canter, which Lance did quite nicely. That was pretty exciting, because I can remember a time not that long ago when Lance couldn't maintain canter on a smaller circle!

*Working on the inside track and utilizing the thought of leg-yield is a big part of nearly every schooling session. We do it for trot-walk transitions, canter-trot transitions, walk-canter transitions, and to set us up for success for trot lengthenings on the diagonal.

I had a good schooling ride on Friday, reviewing the things we worked on in our lesson. Lance got yesterday off, and I rode again today. He was clearly full of himself while I was grooming him and tacking him up; so much so that I decided to tie the reins up and turn him loose to burn off some steam in the fog! 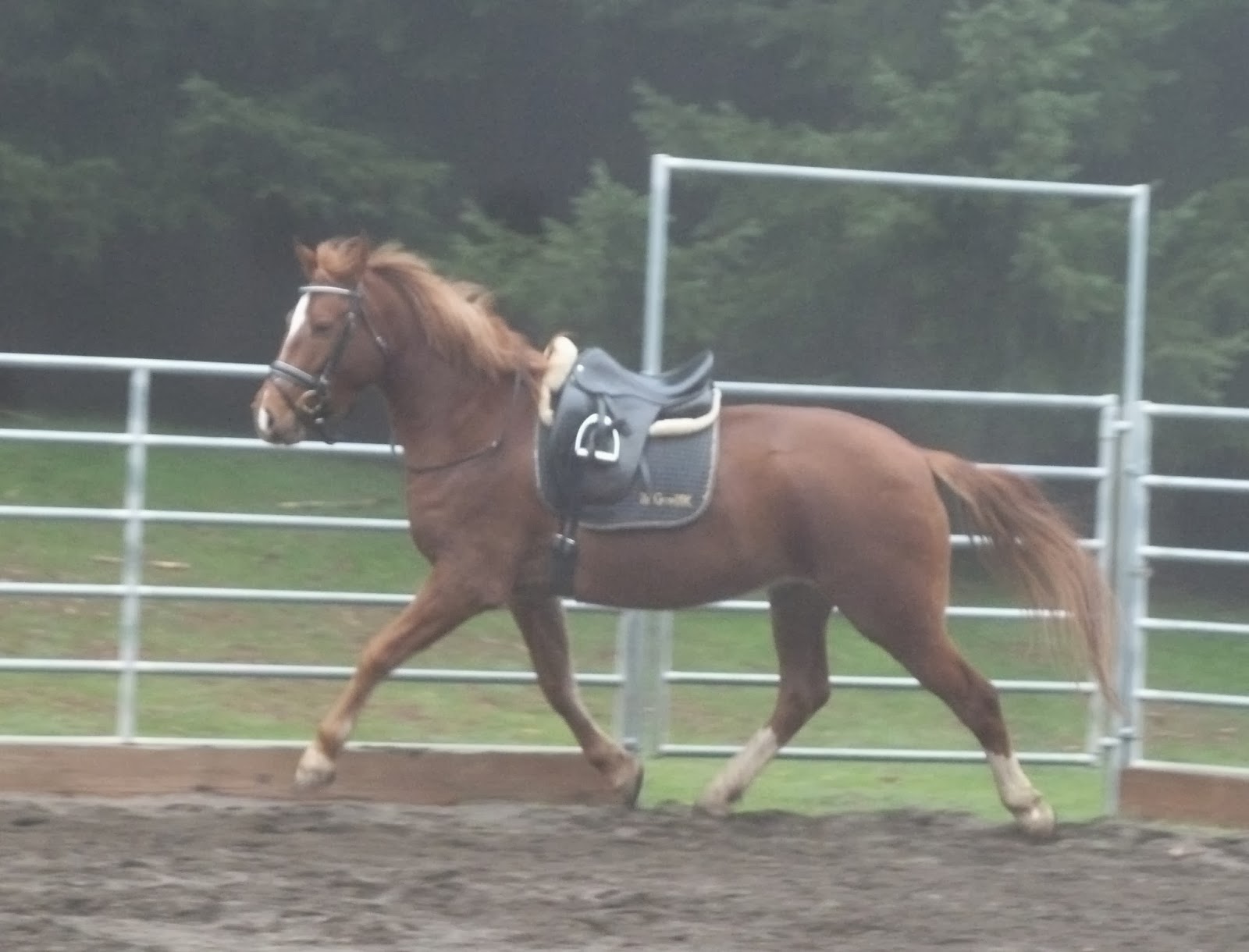 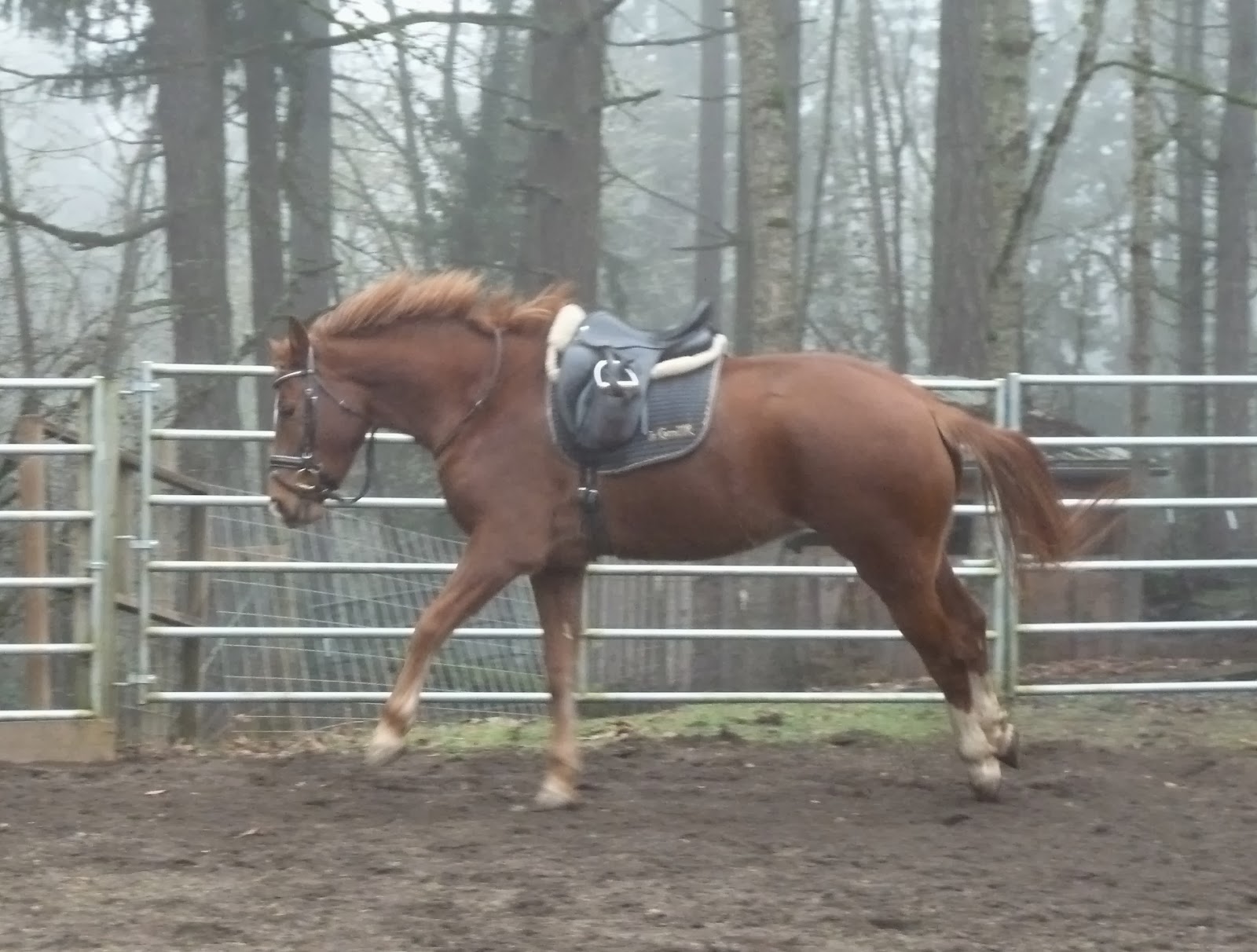 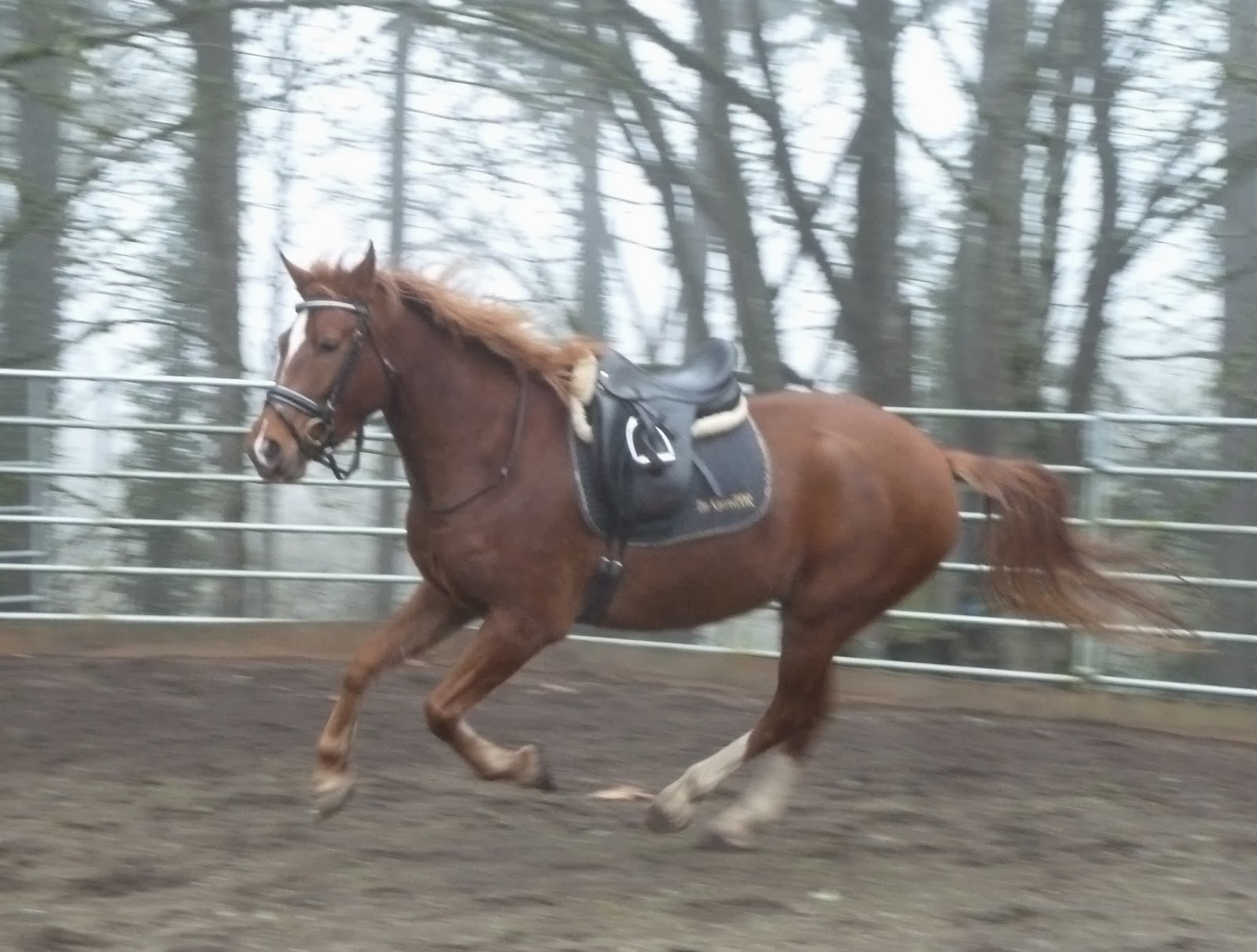 He has never carried on so hard and long. He was sweating and blowing hard when he decided he was ready to come when I called, so I didn't ride very long. He gave me very nice responses to everything I asked, and that was enough.  :-)
Posted by Michelle at 10:11 PM