Success in the important things

I finally feel physically and mentally recovered enough to handle whatever comes, so today I rode Lance outside our arena. We warmed up and schooled in the arena first, then rode down the lane to get the mail. The vineyard was playing the distressed deer bellow from speakers next to the road (I have no idea why; that's usually an autumn thing). Lance made it by okay on the way to the mailbox, but on the way home he got increasingly alarmed, in spite of lots of lateral work to keep his mind and body occupied. So I got off and led him away from home, then got back on to ride home. Again he got to a point where he seemed ready to "stop, lock, and load," so I repeated the dismount, lead away from home, remount, and ride home. The third time he was able to hold it together and we made it safely by the scary area. Success! 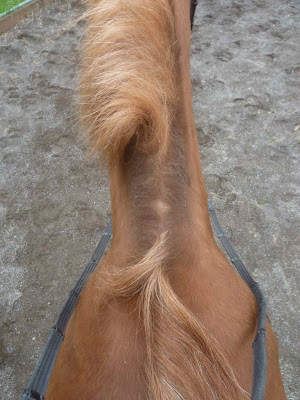 Keeping a full mane on my horse has not been successful, however. The high-neck turnout sheet was protecting it, but when we had the record-breaking heat wave earlier this month I took it off because Lance was just too hot. He started rubbing then, and has continued even when I put the high-neck sheet back on. Today during turnout he ripped off one of the belly strap fasteners, so he'll be able to rub his mane and tail to his heart's content until SmartPak gets a new shipment sometime in August. :-/
Posted by Michelle at 10:09 PM

What is the purpose of the speakers by the road? Are they attempting to haze deer away from the vineyard? That would annoy me if I had to hear that on my ride.

On a positive note, good job to you and Lance for dealing with his heebie jeebies. My old horse was very reactive and a simple startle would just become a biiiig issue. :-)

I'm guessing the deer distress sounds are to keep deer out of the vineyard, although I am not aware that they do much damage. It IS annoying!

Silly people, the deer will get wise to the sound and how flipping annoying.
Hooray for a getting back up and working through the spook issue.
You could always (gasp) just roach his mane completely.