Lance's weight is holding now with the addition of oil and fresh pasture to his diet, but his allergies and their effects on his breathing and attitude seem worse if anything. 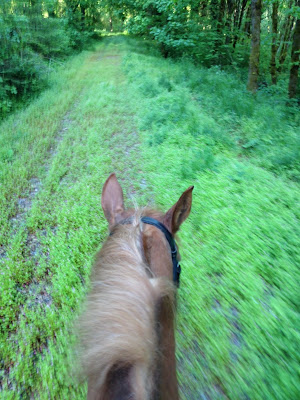 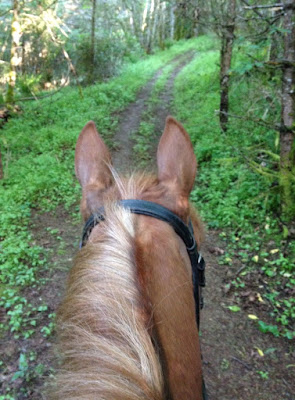 On Sunday we took a saunter through the woods while it is still passable. (Some areas are crowding in on both sides with an unsavory mix of poison oak, stinging nettles, burdock, thistles, tansy ragwort, Himalayan blackberry, and horsetail.) The last stretch when homeward bound is all uphill; Lance stopped five times to huff and puff even though we didn't ride long, far, or fast. As far as I'm concerned, that means trail rides in the mountains during horse-camping trips is out of the question.

I have also noticed a strange phenomenon in recent weeks. Lance has always been a "stingy sweater;" I used to think he had anhidrosis or hypohidrosis. Now I often find him sweating just standing in his stall or out grazing when it is warm (even though Oliver isn't) – and there is always more sweat on his left side. I took some photos one day to show Rick; you might have to click to biggify the full body shots to see the difference. 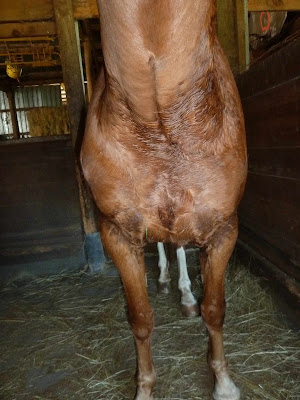 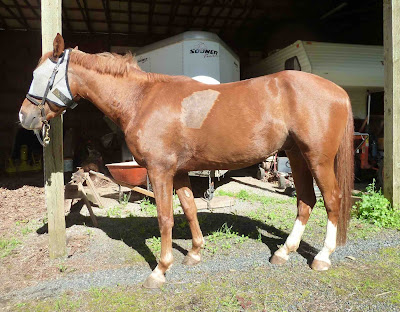 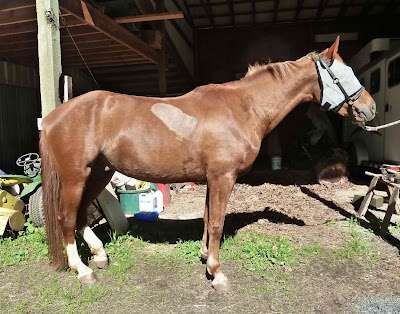 When we come back from a ride, the sweat seems bilateral; it's only the "resting sweat" that's uneven.

He is itchy and rubbing out his mane which is usual for this time of year. Yesterday morning with puffy bags under listless eyes, he looked a picture of hay fever misery, poor guy. Then last night when I went down to do chores, I was startled by puffy bulges where divots above the eye sockets usually are. Again I snapped photos to show Rick, with a shot of Oliver's face shown first for comparison: 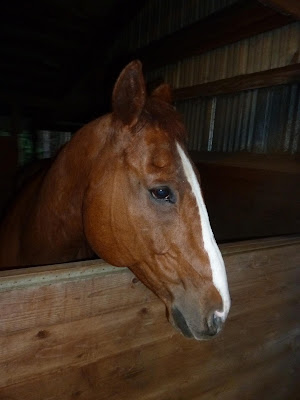 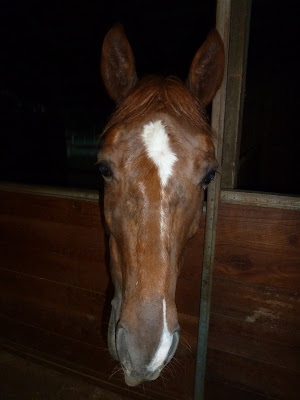 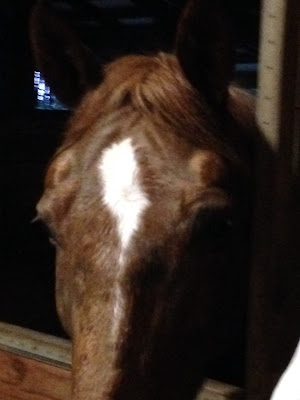 Rick thinks it is probably inflammation due to allergies, but could be a side effect of the steroids or a symptom of Cushings disease. (Interestingly, Cushings was one of Rick's suspicions when we noticed in January how much weight Lance had lost, but the specialist thought heaves was much more likely so we never tested him.)

Today Rick took time to do some follow-up. After checking Lance's heart, he listened to Lance's lungs and airways at rest and stressed. Then he scoped the back of Lance's throat to see if any structural or neurologic problems were evident. Next came an external neurologic exam, followed by a blood draw. His conclusion is that Lance appears pretty normal clinically. There's the uneven sweating and swelling above the eyes, but no sign of neurologic problems and fairly minor lung issues. He's going to send the blood in to test for Cushings, and is cutting the amount of prednisone I'm administering each day. Now we wait on test results. 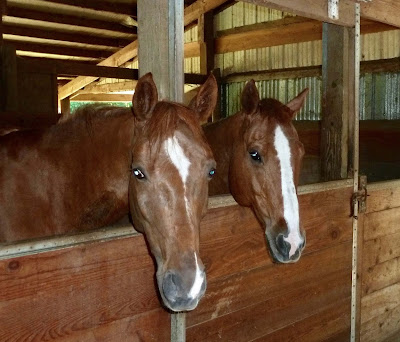 I really appreciate my DH's time and expertise; I feel much better now about continuing the bit of work we do in the arena as well as short trail rides. I will continue to give him inhaled albuterol before each ride, as it seems to open up his airways and reduce coughing for awhile.

Thanks for the update. I'm sorry you haven't gotten any better news about your beautiful boy.

It's so difficult to watch an animal you love decline despite the attentive care that you give him. Poor guy. Poor you. Fingers crossed the blood work will show up something that you can do that will help Lance to be himself again!

Poor guy, poor you! I know how much you love him. Let's hoping through trial and error the cause will be found. Hugs!