Earlier this month, Rick attended an advanced neck and back ISELP seminar. What he learned there prompted him to take a look at Lance's neck. So tonight he watched Lance move on the lead-line, lunge line, and under saddle, then he ultrasounded both sides of his neck. Diagnosis: synovitis encapsulitis – arthritis, basically. This is probably what has caused Lance's stumbles and falls; he's not just lazy! 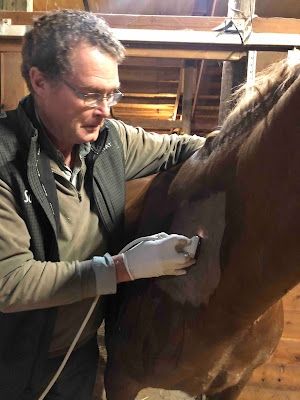 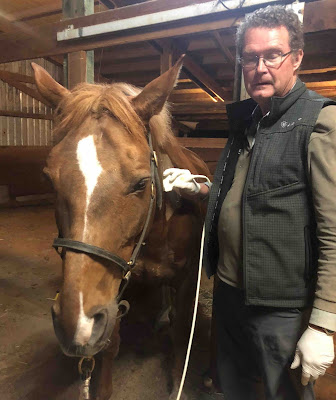 Rick plans to x-ray Lance's neck as well, just to get as much information as possible, then inject the problem areas (C6/7 on both sides, C5 and C7/T1 on the right) with steroid. Depending on the results, Rick may follow that up with IRAP therapy. (Yes, I am very thankful to be married to an equine vet!)

I went through this with Russell; Rick gave him repeated neck injections with diminishing returns so we ended up retiring him. Maybe it will work better for my Lancelot; we'll see.
Posted by Michelle at 10:59 PM

I tell ya, Sara, I'm beginning to think there's not a sound horse out there! Then again, Lance had an old suspensory injury when we got him, and has since sustained two or three more – and multiple suspensory injuries should also make one take a look at neck problems....

Alanna, it IS, but it is also 'nice' to know what I've long suspected – that there's an underlying reason for his stumbling and tripping; it's not laziness! Would I like a sound and capable horse to play with on top of keeping my buddy? Sure, but the Lord will have to provide one if He sees fit.

Please let us know how it goes with your wonderful boy.

What a beautiful babe. I have a horse, adopted from my sis in law but only so that I could give her a home around other horses till ...WHENEVER. She is not ridable.

I will, Mary. Rick's not sure if he will inject Lance's neck or not, since he's already on steroids....

Thank-you, Pam! They are certainly worth having, even if they aren't rideable. :-D