...my new love took from me – one horse treat from my hand!" (to the tune of "The Twelve Days of Christmas" 😁)

Sunday afternoon after her arrival I left Stella alone to settle into her new quarters. 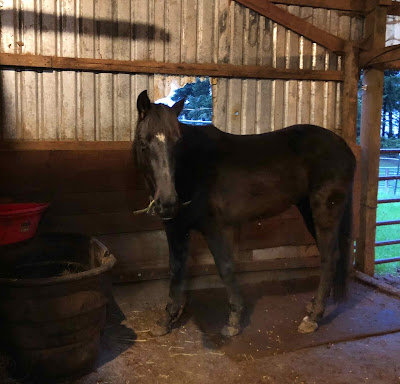 But every day since, we've taken baby steps together. A friend asked me on Facebook, "Is she friendly towards you? Or is she skittish?" My reply was, "Neither. I would say she is 'tentative.'" Other descriptors would be cautious, careful; therefore, I want to proceed slowly to build trust and confidence.

On Monday I haltered Stella (that in itself has to be approached slowly) and led her around the arena and lower pasture. The ewes in the middle pasture and the cavaletti in the arena were both new to her, but after channeling her inner meerkat and 'assuming the position' of a show Morgan (What's with that? She's never been taught to 'park'!), 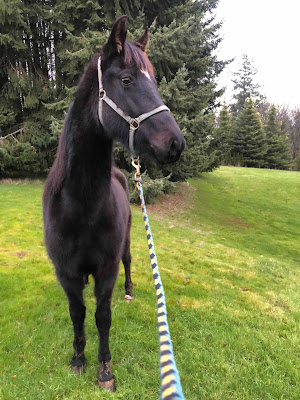 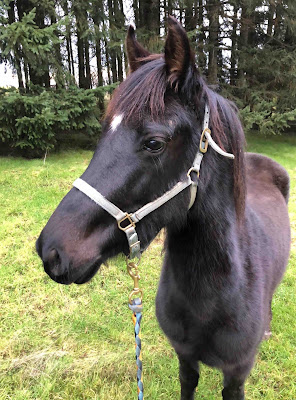 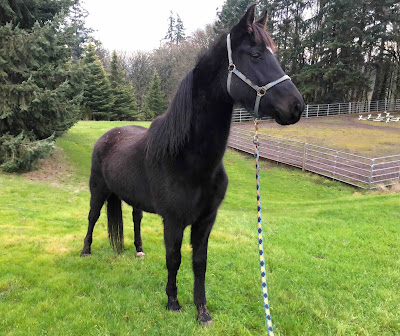 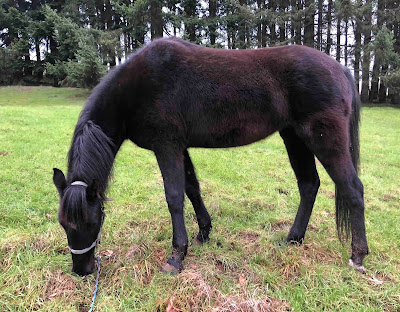 she took things in careful stride, enjoying a dainty graze and walking over the cavaletti. Then I got an idea. Turning her loose in the arena, I went and tacked up Lance.

Back in the arena with Lance, I proceeded to exercise him while Stella was free to move around. During our walking warm-up, she followed us around and around the arena; when we started circling at the trot, she moved out of the way and watched, then had a good roll. Perfect; this is going to be a great way for both to get exercised without doubling my horse time! (My husband is not-so-secretly worried about that.) 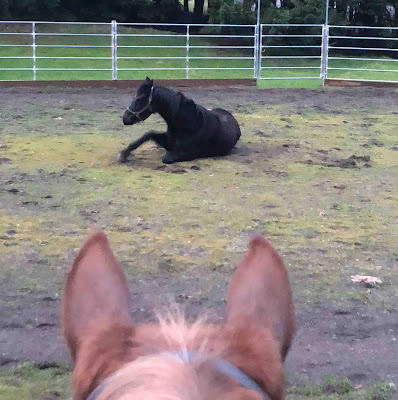 On Tuesday we walked up the driveway (chickens!) to the upper pasture, where we could see and hear the backhoe working in the neighboring lot. Then Lance and Ollie hollered for her and she got anxious about being away from her new herdmates. In her agitated state she reared up a little – then she did it again. The second time I gave her a good yank with the lead rope; when she responded by immediately settling down and focusing on me, I rewarded her by leading back towards the barn. Again I turned her loose in the arena while I exercised Lance; this time she didn't feel the need to follow us around but did her own thing, including playing some. Twice she broke out in a BIG, fancy trot, warming the cockles of my dressage-loving heart! 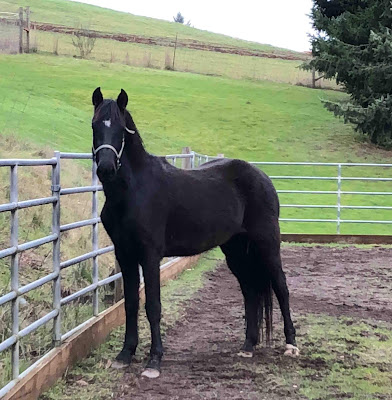 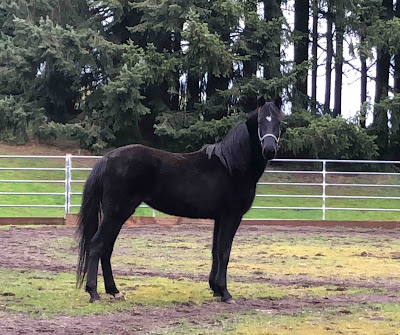 Back in her stall, I picked up each front foot; she moved off when I asked for a back foot. I didn't want to tie her up to work with her, having never seen her tied; I waited until yesterday when Brian was around and had him hold her. She let me pick up and clean out all four feet then, so I feel much better about the farrier coming a week from today to trim everyone.

She hadn't been interested in any treats, so yesterday's acceptance of one inspired my opening song. 😁 So far it's been a one-off, but that's okay. As with my sheep, I'd much rather she come to me for a scratch than for food; Lance is too much of a Cookie Monster!

Speaking of Monster Lance, yesterday during our arena time (got in my New Year's Day ride!), Stella got downright playful. Lance responded by getting amped up. After 'riding the whirlwind' for a bit, I decided the better part of valor would be to get off and lunge him. Not having a lunge line handy, I just started moving him around me at the end of the reins. BIG mistake; he got snotty and turned his butt towards me (something he also does occasionally on the lunge line) which was uncomfortably close with just the reins to hang onto. At that point I'm not sure if he pulled away or I let go, but he tore off. At first I was just worried about the reins (they were destroyed), until I realized that he was laser-focused on ATTACKING STELLA! As he charged after her with ears pinned and teeth bared, I tried to run interference, shouting at him and threatening him with my dressage whip. He grabbed her with his teeth several times, but I was able to thwart him from cornering and kicking her. After several heart-stopping minutes, I got him separated at one end of the arena, and he was winded enough to recall when I asked.

What provoked his uncharacteristic behavior? A blogpal suggested jealousy; that could be, but he's getting just as much attention as ever. I wonder if her playfulness was taken as a challenge, or insubordination, as that's when he started getting 'on the muscle.' At any rate, I'm not sure I'm going to continue joint arena time for now!

Besides handling her feet, Stella's other 'baby steps' yesterday were over the discarded dryer felt laying in the driveway. She walked on it and over it several times with me, no big deal. Good girl! 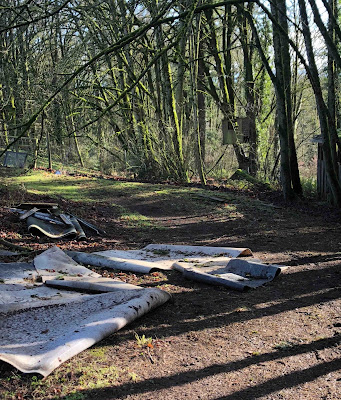 I also gently curried her all over after she dried off from rolling in the wet arena. Seeing her with her hair plastered down highlighted how thin she is; I think she may have lost more weight since coming here. Not surprising, since relocation is a major stressor, and she doesn't seem thrilled with our hay. I'm headed to work now; afterwards I'll stop at the farm store for some additional supplementation. Then home again for today's baby steps forward!
Posted by Michelle at 9:30 AM

I don't think that was jealousy, but it is normal for older horses to chase youngsters off and to defend their space. In nature, this would happen in huge open spaces with no fences. The baby runs off until the older horse stops chasing and then baby will circle back and approach in a different way until she learns what is appropriate. It is all about establishing appropriate interactions. However, in a closed space - baby runs away, but gets stopped by fence, then older horse ramps up the pressure because baby is not behaving "properly". You either need wide open spaces or a fence between until they can work it out around all the human interferences.

She is very lovely:)

Michelle, Stella is so pretty. I just love the darkness of her coat with her heart-shaped star and the reddish burnishing on her muzzle and body, and in her mane :-) I'm so excited to watch your progress with her. I can already see her with you in the show ring :-)

It's always fun to get started with a new project. How tall is Stella? She's 3 now, turning 4 this year?

Roz did the exact same thing with Emi when I brought her home. You may remember me writing about it. They had shared their paddock for a couple hours and all seemed well. As soon as I let them out he started chasing her viciously. She had no idea what was going on. He ran her into the fence (she got scraped but that's it) and he finally slipped and fell, which is how I got her separated from him. It was quite a while before I trusted them turned out on the pasture together. That's a TERRIBLE feeling. I'm glad all was okay (besides your poor reins).

Stella has a lovely eye. I agree with Dancing Donkey about the behavior. Everything you're introducing her to is excellent. But don't forget the "chair technique" - my technical term :) Bring a chair out to her enclosure. Sit down. Read a book. Hang out. No pressure to do anything. When you are 100% in her comfort zone, then when you do have adventures, you'll still be her comfort zone.

Kris, you'd think my big red mustang had actually been born and raised in the wild from the way he acted, instead of being domestically bred and born! What you said makes sense, although this is the first time Lance has been ANYthing but mildly curious about a new horse here. YEARS ago I do remember Rick's old cutting horse doing the same thing to a big appy of a friend's I had here for a season. But as Sammy charged the appy, the appy turned his butt and nailed Sammy HARD – and that was the end of that!

We have a LONG way to go before showing, A, but I'll enjoy every step of the way!

Alanna, she's 15 hands right now, and yes, turning four on 3/31/20. The 'string test' that was accurate with my other Morgan says she still has inches to grow; I'm hopeful. I'd forgotten that Roz did the same thing!

Thanks, Terry; I do spend some time with Stella every day just hanging out (her hay feeder is a big oval stock tank; I sit on the edge), as well as doing at least one small new thing with her a day.

I always listen to anything Dancing Donkey has to say. I think take the time it takes to work two horses separately and everyone can eat peanut butter for awhile. What are you going to remember in 10 years...