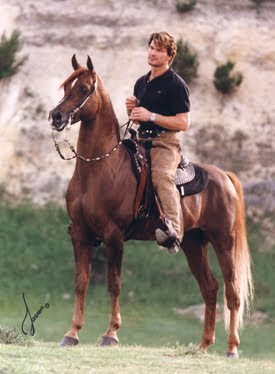 Patrick Swayze, a passionate and valued member of the Arabian horse community died from pancreatic cancer complications at the age of 57.

Swayze was known to most as a dancer and actor in films such as “Dirty Dancing,” “Roadhouse” and “Ghost.” To the Arabian horse community he was an accomplished and giving horseman. An active participant at Arabian shows throughout the late '80s and early '90s, Swayze’s star power helped bring attention to the Arabian breed. Swayze’s true passion for the horse earned him utmost respect in the horse community.

Although Swayze’s bond with horses started as a child, he claimed he did not fully realize the potential relationship with a horse until later. “When you get a bond happening with a horse, it’s interesting. I was raised a cowboy and did some rodeo and stuff and thought I was a horseman. Found out I knew nothing. As I have gotten into these horses, [Arabians] I have realized how far you can go with them,” said Swayze in a 1994 video interview.

In 1991, the same year Swayze was named People Magazine’s Sexiest Man Alive, he bought the stallion Tammen from Tom McNair and during the next year the stallion was honored with several halter championships. “Over the years it’s happened—people gradually started seeing that I am serious about this and I care more about the horses than my little image. I am accepted now, so going grand champion there was like a big event for me,” said Swayze.

Swayze owned more than a dozen purebred Arabians and became an active breeder. Tammen, Swayze’s 1982 Champion stallion, sired 175 foals. A photograph of Swayze with Tammen was made into a poster and established as a youth fundraiser during the early '90s. The poster, now in limited supply, continues to help fund Arabian Horse Association Youth Programs.
— from the United States Equestrian Federation
Posted by Michelle at 11:12 AM

"Dance in your own space" from Dirty Dancing - good advice for horsemen and dancers alike.