Yielding to temptation with good results

Since our ride on Sunday, Russell has had only his shadow to dance with; I had too much to do to ride until today. I was a little worried I wasn't going to be able to ride at all for awhile, because I noticed that an old splint on Russell's inside left front was enlarged: 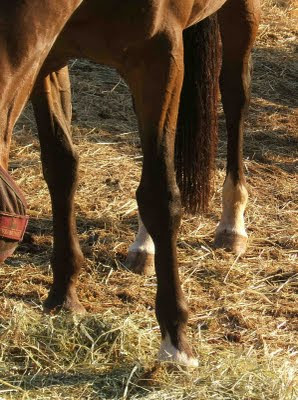 But after x-raying and ultrasounding it on Monday, Rick pronounced he only had a bruised splint bone and was good to go. 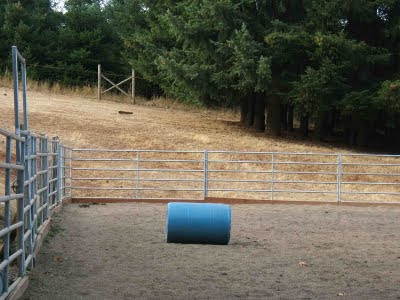 After I lead my tenderfoot down the rocky access to the arena (he was trimmed on Wednesday) and mounted, we started our warm-up. That blue plastic drum has been in the arena for weeks, ever since Brian decided he wanted to jump his pony over something (not that Breezy cooperated). The thought of trying to get Russell to jump it had flitted in and out of my head rather quickly. I was told he jumps willingly, but have never confirmed it for myself, and after all, that barrel isn't as wide as my dressage whip is long! But today, for some reason, I decided to try it - dressage saddle, long stirrup leathers and all! I approached it at the trot with both legs firmly guiding Russell to the center of the barrel, and although he tried to veer sideways, he did indeed jump it! Whee! We cantered around the arena and jumped it two more times, and then I reversed direction and approached at the trot again. This time he successfully sidestepped it, and it took a few more evasions to convince him that over was the only acceptable option. But we ended with two more good jumps - and a very energetic, forward horse! I had to work to balance and soften him in that energy, but we had a very good school and I was tickled pink. Not bad for a couple of middle-aged dressage partners! 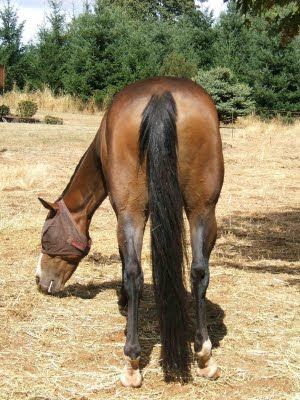 Does anyone else admire their horse's behind? I'm not sure there's a part of a nice horse I don't find attractive, but I think Russell has a particularly nice "rearview."
Posted by Michelle at 8:31 PM

Well I always admire Muppet's rear too (and the rest of him so you are not alone), although I wish his tail was more like Russell's. I swear my boy must have some Appy in him.

Congratulations with the jumping. I got giddy the other day when Muppet walked over a pole on the ground. My horsey news is that I am going to go and watch the WEG next year. I can't wait to buy tickets. Anyway I am glad your jumping went well.