And so we start 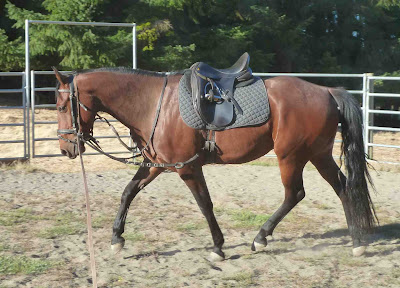 Yesterday evening I lunged Cohort with his new bit, and he was such a good boy. He has mostly excellent manners, lacking only in a prompt canter depart from my verbal cue and the conditioning to maintain the canter for long (not unlike Larry when he first arrived). See how nicely he steps under with his hind legs? He has a big overstride at the walk. (You can see how dusty my arena is right now, too; the first photo was taken at the beginning of our session and the second was taken later.)

I was going to ride this morning while Rick was around and the temps were still pleasant, but after I did chores and trimmed hooves on five sheep, Rick decided to go get the last load of hay and asked me if I would help. He has done the lion's share of filling the barn with hay this year; I couldn't say no. So now we have 14 tons of hay stored, I'm hot and sweaty, the temps are soaring into the 90s and Cohort is enjoying being being out on pasture. Looks like I'll have to shoot for a Sunday morning ride!
Posted by Michelle at 5:00 PM