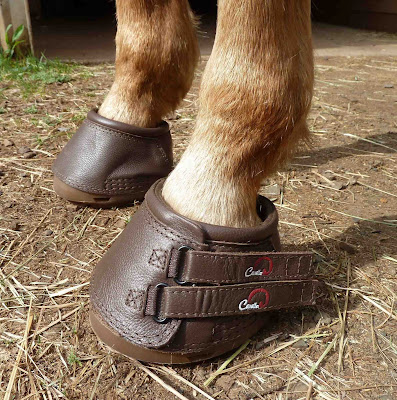 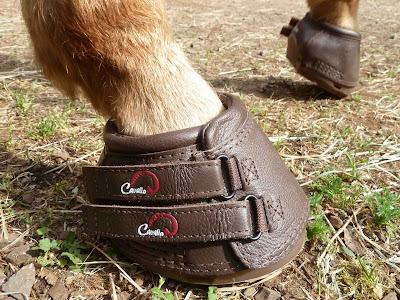 We took them for a short test ride around the hill yesterday. As advertised, they are easy to put on – so easy, in fact, that I managed to get one on crooked. After fixing that, I led Lance out of the barn, expecting some comical high-stepping from the unfamiliar contraptions. Nope. He didn't seem to mind them in the least, and traveled naturally throughout our ride, in all gaits. Better than naturally, actually, because there was zero ouchiness on gravel, which I didn't avoid as I usually do. When I removed the boots at the end of the ride, he had some roughed-up hair on his heels, but nothing more. I am hoping that with the recommended break-in, even that will go away and the boots will be a comfortable, more economical alternative to iron shoes.
Posted by Michelle at 5:39 AM

They look great--and hooray for boots that you don't need superpowers to put on! :)

I'm happy they are working so far!

Awesome! I've been really happy with mine!

My keyboard stopped working... So, I'm glad you had such good results on your test ride, and that Lance isn't bothered by them! I liked that they were so easy to put on, and had the same great response from the horse that I used them on. I had never thought of them as horse sneakers, but you're right - that's what they look like!

The brown was a great choice!

I wish they made those in small pony and draft sizes. They look very nice and also look very easy to take on and off. I use the easy boot epics on my driving pony on our road trips, and it is a bit of a wrestle to get them on and off. :) Thanks for sharing!

Wow, what a boon that would be... no horse shoes! I can't believe how much things have changed since I last was into my horsey chapter of life!:D Now I also know why you don't drool much over studio design and goodies... you are totally invested in your horses! :D Wish I had that problem...
Hugs,
Beth