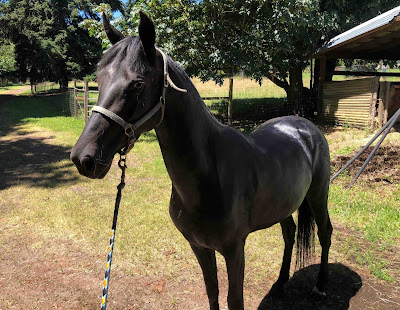 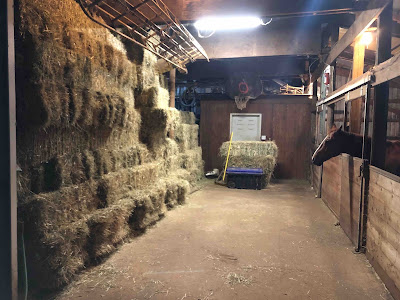 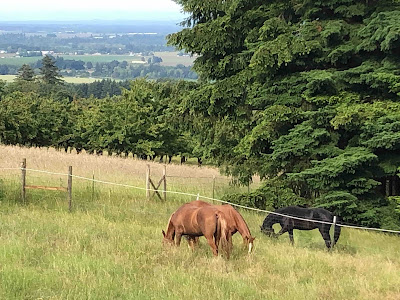 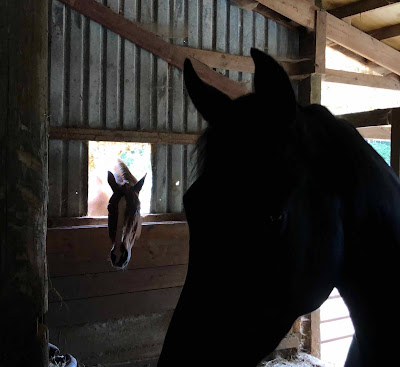 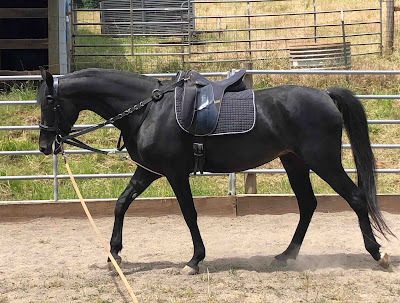 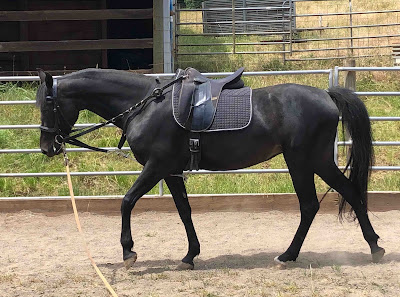 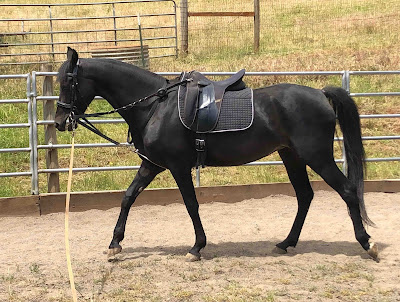 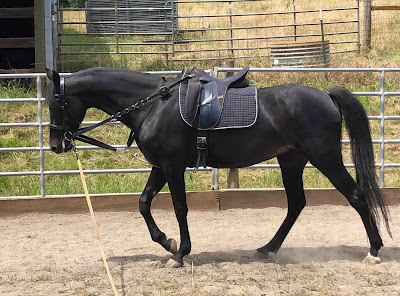 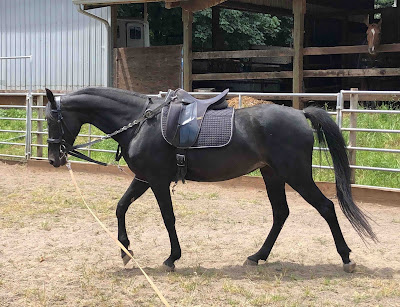 But other than the tongue irritation, I am very pleased with how things are going! Whether it's specifically from following this program or simply following a program, Stella seems more focused (because I am???) and is making rapid progress. The lack of a helper to transition to under-saddle work is still going to be a hindrance, but the foundation laid before that is going to be much more solid, and her physical development is going to be enhanced with the sliding side reins.
Posted by Michelle at 1:12 PM

You kown, you might be moving along in her training now better because you had all that time with her before. She needed to build trust and comfort - become familiar with her new owner and surroundings. I know nothing about horses, but I imagine basically all animals 'of a certain disposition' need that time in advance of anything structured.

I'm sorry Stella had a sore mouth. I hope it's better now.

Glad you got that nice hay!

I hope you are doing well.

She's looking great! So glad you've found a system you want to work with to move her along the path. Her "stars" look like the back of my hair ;-)

Elaine, I'm sure that is part of it. She is definitely more comfortable with me and Brian because we've spent daily time with her; she is still very unsure of Rick, who she has seen much less.

Jeanne, her tongue seemed fine the next day, so it wasn't too serious. I hope you are doing well, too!

You will be riding her before long. Good work on the Vienna reins. Creativity is way cheaper than on line shopping. Is Stella comfortable with you belly down across her saddle so you can slide right off if she is alarmed? Or standing next to something where you are riding height above her (higher than mounting block height) When I started my 1st baby, he was never upset about me up there, but he had been with me since birth and was very trusting. Stella just gets prettier all the time. No wonder Oliver is in love, ha ha.

Sylvia, Brian led me around on her Monday night. She is not worried about me mounting or unmounting from arena fence or mounting block; it unexpected movement of stuff along her sides that seems to freak her out. Fortunately, she is very responsive to the bit.

Your mare looks uncomfortable, also how sad that she had such discomfort that it visibly irritated her tongue, she must have had pain.

Have you heard of a Cavesson halter/headcollar? Designed for correct lungeing. The Cavesson works perfectly and is much more comfortable for the horse. Using the correct tack means a happier horse, one that can move freely.

Anonymous, I agree about the tongue irritation, which is why I went back to putting a halter over the bridle and attaching the lunge line to the halter. She hasn't had any mouth problems since, and acts calm and comfortable now. I have seen cavesson halters, but have never owned one.