Two posts in two days! What has gotten into me? Well, Stella and I had a 'first' today, and I decided to just document it.

I wanted to get a 'state of the union' on Stella's canter under direction before thinking about adding a third gait to our under-saddle repertoire. She canters at liberty just fine, but turns into a whirling dervish on the lunge line. I don't think I've lunged her since beginning lessons with Lisa last August, so wondered if things had changed.

Well, no; no, they haven't. My girl is still a whirling dervish on the lunge line. But I know her much better now than the last time I lunged her, so I kept quietly working with her until she walked on command in both directions. By that time she was sweaty and winded, so I got on to walk her around and cool her out. I left the arena gate open, and after a bit I directed her out of the arena and up the driveway – our first solo foray out of the 'sandbox.' We walked up the driveway to our entry gate, then did the circle up by the house before walking back down to the arena. She was very up-headed and alert but that was it, so she gets an "A"!
Afterwards I hosed her off and let her out into the lower pasture to roll and graze. Then I led the boys to the upper pasture, where itchy Lance also rolled, leaving lots of hair in the grass. (Oliver has a very hard time laying down.) 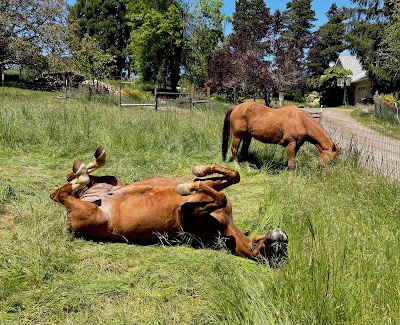 I might need my head examined, but I'm actually contemplating showing Stella this summer. The Oregon Morgan Classic has dressage classes, including USDF Intro Tests A and B. Entries close on June 1, so I will keep working with Stella until then and decide at the last minute.
Posted by Michelle at 11:08 PM

How fun! I hope you do get a chance to show, it sounds like it would be a great experience where she's at with things.

Jen, it could go great or very, very badly. Sometimes Stella shocks me with how bold she is, like last summer when I took her to Perrydale Trails and we did all the obstacles in-hand. But she has also freaked out to the point of losing her mind....

I hope you do go to show with her. It will be the beginnings of her learning and working in a new environment. And I bet you guys win :-)

"Show her." What does that entail? Whatever it is, she needs the experience of being around lots of people and unfamiliar places.

A, winning would be out to the equation, but yes, it would be good for her education and exposure to new things.

Elaine, it would entail a lot of primping (bath, trimming of shaggy bits like her ankles, and braiding) that she's never experienced, hauling very early in the morning to a totally new environment, and probably seeing more horses and people in one spot than she's ever seen before. All that, and then being expected to carry me into a new arena with a suspicious-looking cluster of people at one end (judge, scribe, etc.) and probably decorated with pots of flowers and such, and focus enough on me instead of all the "NEW! SCARY!" stuff to do what I ask. No big deal, right? 🤣🤣🤣

Hahaha! Why don't you just settle for hair braiding and some pots of flowers draped over your fences first, and see if YOU survive without injury. hahaha!

That is a whole lot of new stuff for her to accept! I can see her brain short circuiting in milli-seconds. hmmm ... might just be worth the plane right across country to see that person!!

The more I get to know Stella, the more I think that she and Aja really are "sisters" by another mother!! Aja celebrated one year with us last week. Big strides, for sure, but she will never be a laid back cat!