Finally, a show report – and more

Sorry for the long delay in posting. Life keeps marching on and you gotta keep up, which doesn't always leave enough time to recap what is now in the rearview mirror. After awhile, you can't even see what you wanted to recap in the rearview mirror, it's so far away – so before we get to that point, I need to post!
The Oregon Morgan Classic was, over all, an excellent outing for Stella. She experienced SO many new things, and handled all of them without losing her mind or trying to vacate the premises. She did veer away from lots of scary things in the warm-up and show arenas – small doorways from inside to the outdoors, horses in 'pajamas,' unfurling carpets, the hammering of stall drape installations, show carts parked with shafts to the sky, people on an elevated platform (the judge's stand), and a very alarming horse that moved in strange ways making strange sounds (a saddlebred being lunged in full tail-set harness with noise-makers on his feet) who exploded into bucking when asked to canter. And even though they weren't pretty, we made it through our two walk-trot tests – in an arena set up in the center of the stabling barn, surrounded by people, horses, dogs and equipment moving into stabling and prepping for the show! 😬
Stella, still not a fan of the bit, fought it through most of the two tests, and I'm sure I was riding with much  more contact than I use at home in an effort to keep her with me in the midst of all the 'new' and 'scary.' You can see the show photographer's proofs of Intro A here and Intro B here; after viewing those you'll probably be as surprised as I was that we broke 60% in both tests. We even 'won' a nifty neck medallion and an engraved glass since we were the only entry in Intro A! 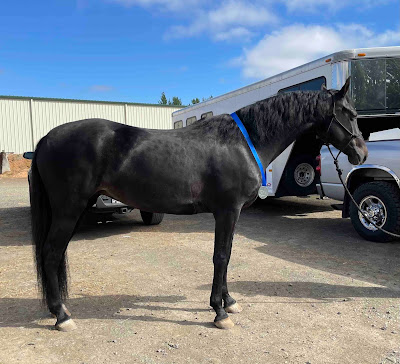 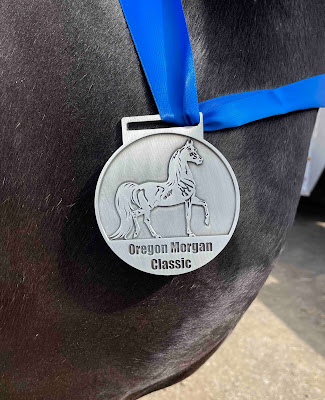 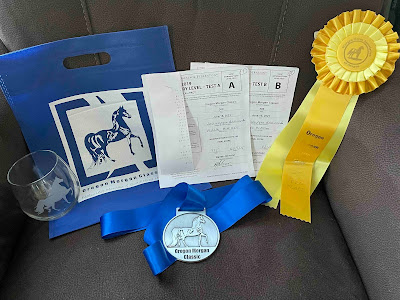 As I stated going into this show, I knew we weren't ready to be showing even walk/trot, but I'm still glad we did. I was SO PROUD of how brave Stella was, and having that experience "in the bank" is worth the price of admission. I think she is ready to go to Perrydale Trails again, this time under saddle, with the right companions; same with the beach. In the meantime, we keep schooling at home so that someday we will be ready for a dressage show. It sure would help to have some expert instruction, but the only one I know and trust is dealing with serious health problems that have her homebound.
Enter technology. Before the show, Anna Blake did a post on "Homeschooling Your Horsemanship." Towards the end she mentioned a "Pivo." Curious, I looked it up. Then I read reviews and watched some videos. I was so impressed that I ordered one the very next day! My thought was that this little gadget would allow me to be my own "eyes on the ground," and maybe I could even send videos to my favorite trainer and pay her for her feedback. My Pivo Pod Silver arrived the day after our show, and I tried it out a few days later, riding Stella in her Duo bit so I could compare [show] apples to [schooling-at-home] apples. I ended up with a 25-minute video that was too long to upload to YouTube, but the Pivo worked slick. Here is a short snippet saved from the long one; it shows some trotting and an entertaining little spook. 😆
Then another blogger I follow mentioned using it in what sounded like a real-time lesson. I left a comment asking about that and Jen responded that with the app Pivo Meet, that is indeed possible. (Jen even said I could test out a live session with her before trying it with an instructor, which was so nice of her!) In the meantime, I took another test video, this time with the Pivo on a post at the side of the arena and Stella in her hackamore. Pivo lost me when I rode by it on the post, so using the bucket in the middle of the arena like I did the first time will be the way to go.
Now I need to download the app, set up a time, and test it with Jen. (But first I have to get through this week when I am working my usual part-time job and covering for Rick's vacationing secretary all my other days.)
Stella has been giving me some interesting behaviors lately; still trying to figure out what's behind them. I will try to do another post about those soon. In the meantime, our 'herd' is down to two, Lance and Stella. 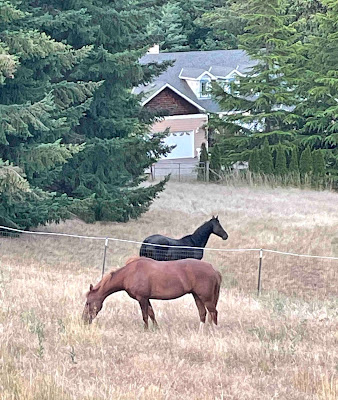 Yesterday Rick finally put Oliver out of his misery. I haven't been turning the boys out recently because Ollie was hobbling so bad. Good-night, Smart Chocolate.
Posted by Michelle at 9:15 PM

Much sympathy for losing Oliver - even if it's the right decision it's still hard! But much congrats on being in the saddle, away from home, with many eyes watching. So brave! Stella has improved so much. Well done!

Thank you, Terry. It really did feel like an accomplishment of TRUST in each other!

So sorry about Oliver :-/. Great job on the show though! I bet she came home a much "older" horse than when she left :-). I've seen the ads for the Pivo and have wondered if it actually worked. Glad you posted!

Yay for a show update! I had been waiting for that. Well done.

I'm very curious to hear about your Pivo experience. I'd really like to take some lessons but with the baby it seems to much more difficult to haul an hour or two away for a lesson so a virtual lesson would be a game changer...but I haven't put in enough work to give it a try. I'm also not sure if it would be weird to ride with an instructor with out actually meeting them in person...things to think about. :)

I'm sorry about Oliver, even if it was somewhat "expected."

Sara, I really do think the experience did Stella good. And with just the little bit I've played with my Pivo, it seems to be an amazing little invention!

Alanna, Jen at Cob Jockey uses her Pivo regularly for lessons; I'm thinking that's how Anna Blake was giving remote lessons during the pandemic, too. Initially, when I got it to record my rides so I could at least be my own eyes on the ground, my justification was that the cost equaled no more than one show or two lessons; that made it more than worth it to me. Now that I realize it can be used to actually TAKE lessons, I'm even more sold! I did have to buy new ear pieces because my AirPods would never stay in with that much movement. But I found some with good reviews for less than $30.

Things are coming along so well with you and Stella. In the video you can see how she is testing the rein pressure, as all greenies do.
I am sorry about the loss of your third horse, but a blessing to be able to do that for him. Will you be getting another LOL.

WAY TO GO STELLA!!! What a champ she was at her first outing! Actually it probably shows just how much trust she has in YOU!

Sorry about Ollie. Once an animal begins to suffer and cannot be "fixed" it is the kindest and most loving action of all to release them from that pain. Despite all the words about "doing the right thing" it hurts like the devil to take that action that ends that life. We have felt that pain 10 times over 50 years with our pets and I still miss every one of them.

I'm so happy for you and Stella in her first show!! I'm glad you decided to go forward - you gotta start somewhere :-)

And I know you said it was time for Oliver, I just know that doesn't really make it any easier to say goodbye . . .

That Pivo thing seems pretty cool - it follows you around the ring?! Wow!!