When a door closes, try a window 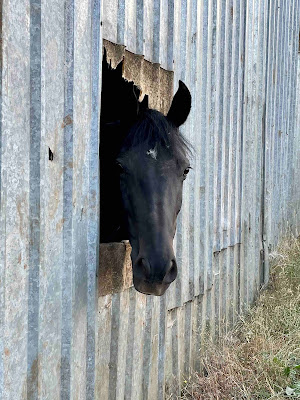 Ha!
Or open the closed door. That's how doors work. 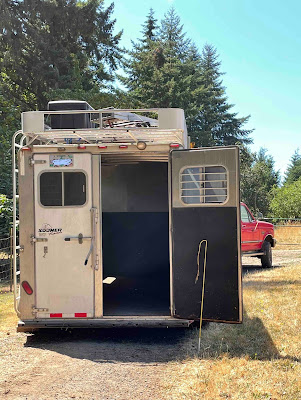 Stella and I have been schooling at home in the cooler mornings or evenings. The weather has been hot and dry, so the arena is really dusty, preventing us doing anything more with the Pivo (watering the arena is not an option with our low-output well), but I believe we're making progress. She started objecting to the hackamore (I think the noseband was the issue) and chews on the soft Duo bit, so I switched her back to the double-jointed snaffle I originally bought for her. Her fussiness with this bit has gotten much better with better riding on my part; funny how that always works. 😏 I was being rather loosey-goosey trying to cater to a baby horse instead of riding her like a dressage horse, forgetting that dressage IS training which is what I'm doing with this green bean! So now I'm riding with inside leg to outside rein and she is starting to explore connection; I've added leg yields and shoulder-fore to our repertoire, too. Like I said; progress. 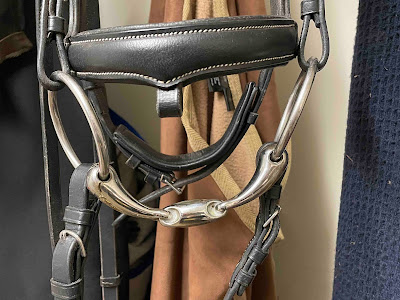 I talked to Rick's secretary about hauling over to use their round pen to start canter work, but it is temporarily home to a friend's wild BLM filly. I've been dreaming of hauling Stella to the beach and Perrydale Trails to ride this summer, but haven't had any luck finding some calm companions. Several of my friends no longer ride so my options are limited.
Yesterday started out cool and cloudy, perfect for a ride at Perrydale Trails. I had nothing else preventing me from going, so I started texting and emailing to see if anyone I knew could go. No luck. But in my communication with the facility owner, she offered to ride awhile with me today if I couldn't find anyone else; she wasn't available yesterday.
With that plan in place, I rode Stella at home as usual yesterday morning, and then moved on to work on trailer-loading. After all, our truck and trailer have been parked on the driveway since Rick put Oliver down, so we had easy access.
Stella is a slow loader; I've always been able to get her on eventually, but never know how long it will take. I think I just out-wait her and she finally gives in, because she doesn't act scared or clueless, and if I have a support person on the ground she loads right up. This is NOT how my horses load and would be a real problem in a must-load-NOW situation, so it was high time to fix that.
After trying once with the usual response (front feet in at most, then backing out), I pondered my options. I tried using the groundwork methods Lisa taught us; no go. Stella probably thought I'd given up when I led her back to the barn, but I selected a long whip with a short lash (propped against the open trailer door in the photo above) and we went back to the trailer. With the ability to walk in the trailer ahead of her and reach back and touch her on the butt, Stella's loading reluctance was quickly erased. We loaded and unloaded several times; by the end the presence of the whip was enough to convince her that I was no longer going to play the waiting game. Smart girl.
This morning we hauled over to Perrydale Trails and went on Stella's first trail ride! She wasn't as brave as she was in-hand last year, but was really very good. Rebecca takes photos of all her guests, but since she was riding with us (on her quiet, young Quarter Horse), she wasn't able to do that this time. So at the end of our ride I took a few photos of Stella near the trailer to prove we were there. 😉 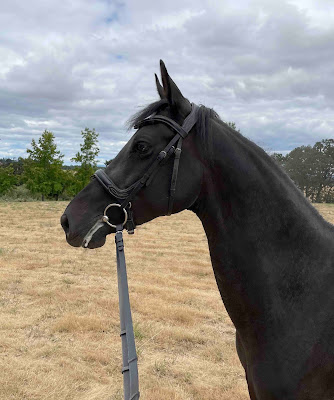 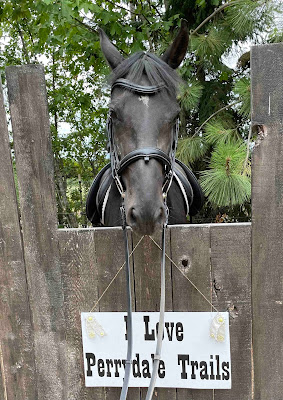 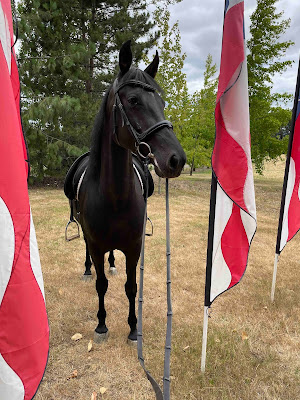 Oh, and she loaded right up to go home without even needing to SEE the whip!
Update on Lance: he has been fine since that scary seizure, and his blood work shows he doesn't have Cushings. It did show that his metabolic syndrome wasn't as well controlled by his medication as one would hope, so we've increased it some. After their fence-jumping escape, he and Stella are back to turn-out in separate pastures, and Lance is getting some needed exercise running around and hollering when he loses sight of her.
Posted by Michelle at 7:26 PM

What a great place to go train! Glad Lance is at least okay. Sigh...

It really is wonderful, Sara. I hope you clicked on the link to see more of the place; it's BIG, with lots of different areas of obstacles scattered all over a big farm, plus some trails that we didn't get to.

I didn’t think of that but you are right. She needs to be able to load on the first try should there be an emergency. Like fire! Are you guys anywhere near the fires that are going on out there?

Yes, Elaine, reliable loading can be a life-saving skill! We don't have any fires near us, and they seem even more distant since the jet stream is blowing most of the smoke to other parts of the country (sorry, Sara).