Well, I didn't really manage to keep good notes on my rides so far this month, but I have photos so that's something, right? Right??? Sigh.
It's been a tough month, with no relief in sight. I was actually planning a trip which had to be cancelled; the best part of the cancellation was not having to leave my mental health horse therapy. Anyway, below in blue is what I jotted down to prompt me to summarize my rides before the wheels fell off my good intentions completely.
Tuesday, Nov. 2: I love it when dry weather coincides with my 'home' days.
Wednesday, Nov. 3
Friday, Nov. 5: Stella was slightly stocked up in her hind legs this morning, so I turned her out for a bit in the arena, Yesterday's wind and rain had scattered leaves across the sand and I contemplated turning her out in the lower pasture instead, but decided the arena was safer even if she smashed leaves into the wet footing. She made good use of her time, running and bucking, then clearly signaled to me when she was done.
To my surprise, the day stayed dry and the sun even came out at times, so I got to ride. Because of the issues of Tuesday and Wednesday, I thought a walk through the woods would be a good change of pace. She was quiet during our walking warm-up, but as soon as we headed up the driveway, she amped up. So I turned her back down the driveway and we rode around, down, and back up the driveway a few times. She was quite nervous about going close to the house at first, but did get better, so we headed out the gate. Again she amped up, so I rode her up and down the gravel lane in front of our property to see if she'd settle down enough to be able to safely navigate off-gravel through the neighbor's property. She never really did, but worked up a little sweat anyway so I called it good. She flipped her head quite a bit in the beginning, but then that behavior mostly disappeared.
Nov. 9
Nov. 10
My notes from the 5th remind me that she flipped her head a LOT during the first two rides of the month. In fact, she was flipping her head so much on the 3rd that I thought she might stumble and fall! 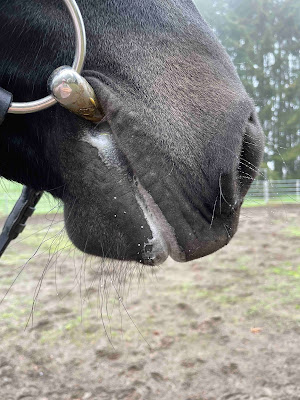 I took the above photo on the 2nd, and the (unflattering) photo below on the 3rd, to try and show the foamy slobber she had flipped up on her face with all her gyrations. I thought she might have gotten her tongue over the bit, but no; I checked her wolf teeth but they haven't changed nor were her gums sore. Stella always generates a lot of foam during our rides; that's usually a sign of relaxation but I'm not sure that's accurate with her. 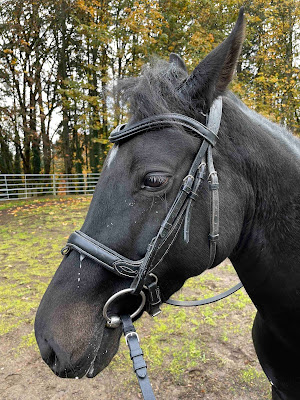 Here she is at the top of our driveway on the 5th: 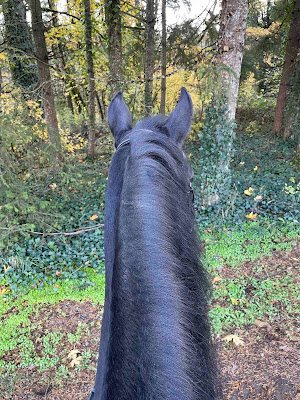 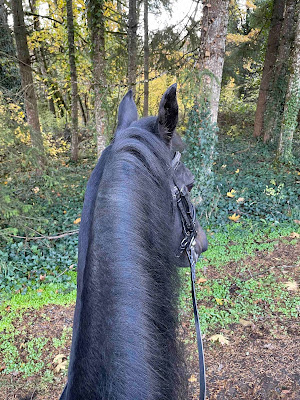 On the 6th, in spite of the puddles and the leaves, I turned Stella out and captured some fun fall photos of my feisty filly. 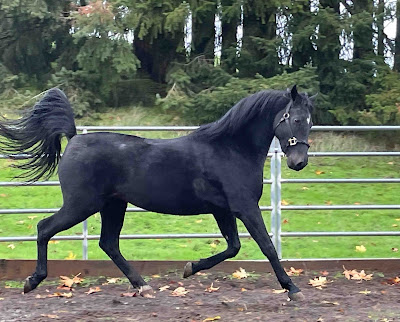 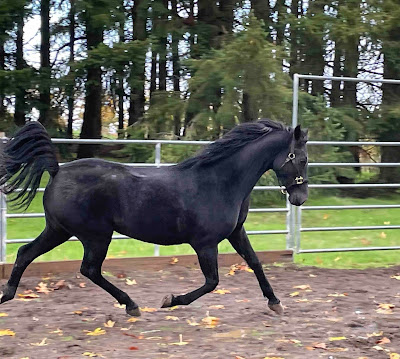 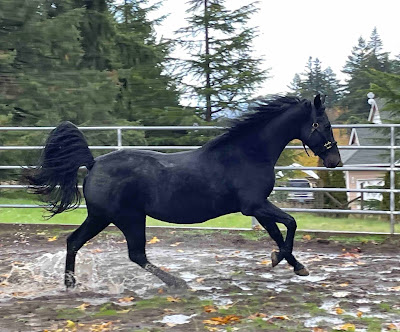 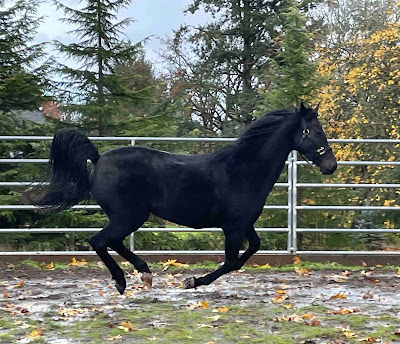 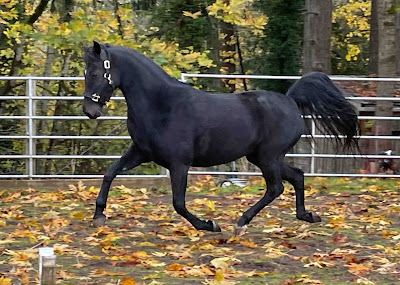 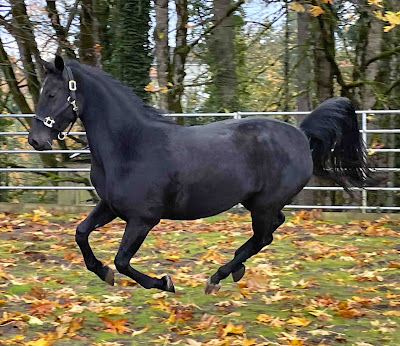 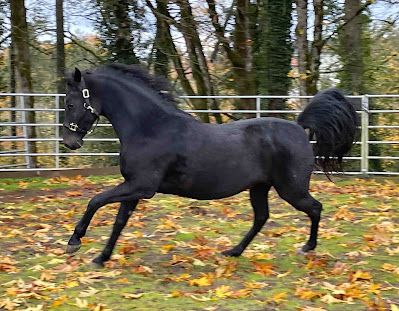 I know I schooled her on the 10th, because I snapped this shot afterwards of her "good girl graze": 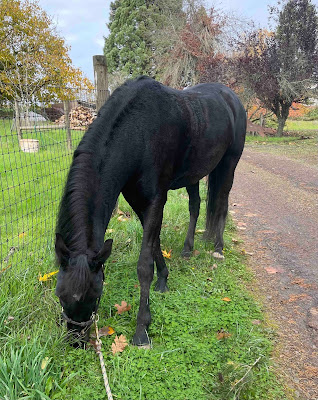 On the 16th we rode down to the main road to get the mail, then made a loop back past our driveway, through our southern neighbor's property, along the gravel lane to our eastern neighbor's driveway, and up to their house to pick up a package. Then I led her home through our lower pasture. 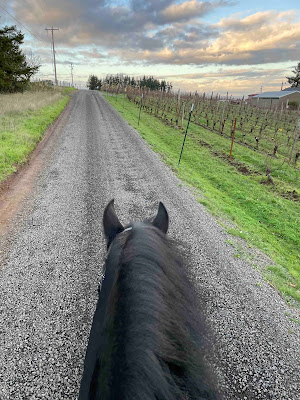 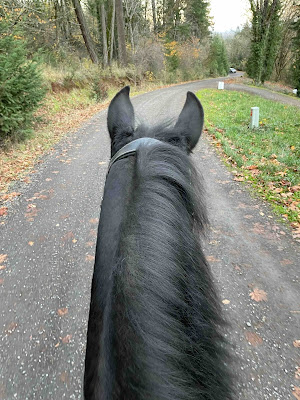 Since it was relatively warm the 19th, I decided to hose Stella off after our ride. Between turn-out, schooling, and her winter coat, she's been getting pretty sweaty – and sticky. After her shower I put Breezy's old cooler on her and left it on her overnight. Other than leading her around in it once before, this is the first time she's worn anything other than tack, and she did great! 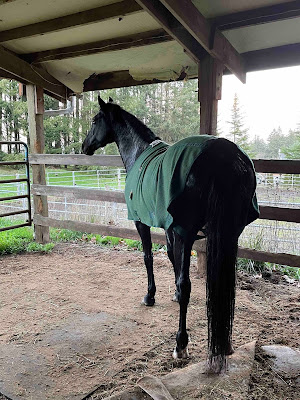 On Saturday afternoon, Stella and I went for a ride through the woods. Ahead of us on that track in the photos below, there has been a lot of clearing. According to a neighbor on adjoining property, two new homes are scheduled to be built there. Rats. 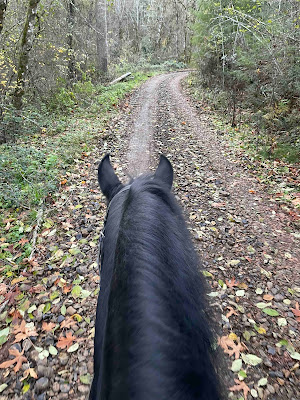 Then we took another branch of the road through the woods, Stella's first time on that one and my first in awhile. A new house has been built on a lot I used to ride through to get to a vast Christmas tree acreage, which was then dozed for a vineyard, which has since been perimeter-fenced. Yes, we are getting hemmed in and fenced out. Anyway, at the new house there were people outside . . . and GOATS! With a guard alpaca! 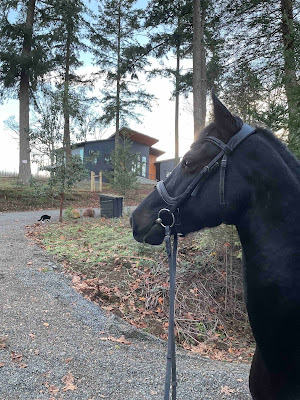 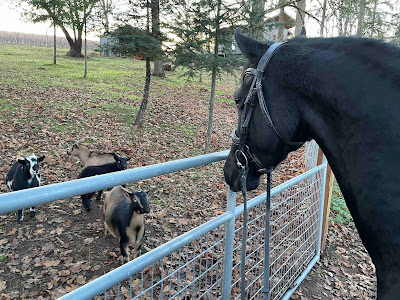 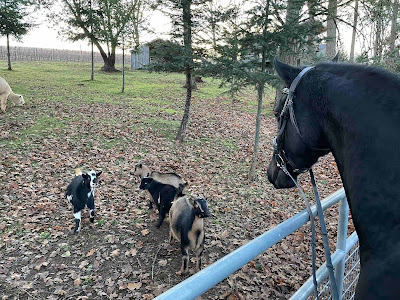 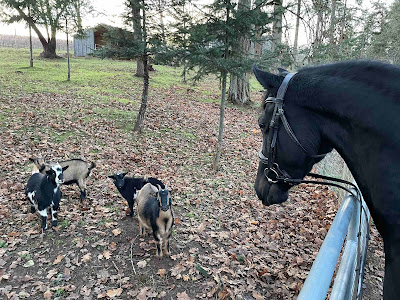 Once again she proved her ability to hold herself together in the face of scary new things; I was very proud of her.
And this was yesterday: 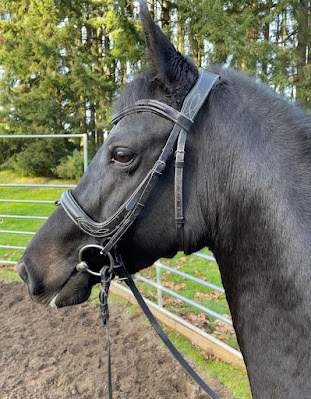 I am taking advantage of every opportunity to get Stella out in this season that's short on daylight and long on inclement weather!
Posted by Michelle at 10:36 AM

Well done !! It is amazing how at first horses are so wary of new things and then know that it is nothing to be afraid of. Right now we are dealing with three deer who appear unexpectedly out on the trail, My husband had his first fall today when he was out by himself on Knight, and the deer were in the bushes. He was fine. He fell slowly when knight leaped to one side, but then got dragged when he held on to the reins while he was still on the ground. He got back on and completed the ride and saw the deer again on the way back with no problem.

Marlane, I'm so glad your husband is okay! The older I get, the less appealing hitting the ground is, since I don't bounce like I used to. For all their strength and presence, horses are still hardwired to know they are potential prey and don't stick around to see if what is in the bushes is friend or foe.

I hope you realize how much progress you've made. Sometimes it's hard to see it ourselves. You are trail riding alone on Stella! Wow!

Thank you, Terry! Yes, I do think of how far we've come together, and am sometimes amazed at that. Stella is still Stella, though, and will always be so. My favorite instructor thinks I should put her on a calming supplement, but I must admit my view has always been to work with the horse you have rather than trying to jazz them up (Lance) or tone them down (Stella) through supplements, unless there is an actual problem to address.

Could her bridle just be uncomfortable somehow?

I am always surprised by her beauty in every shot you share of her. Maybe surprised isn't the right word - she's just a stunner :-)

A, I just responded to your comment on the previous post.. I do think she is reacting to itchy sweat under her bridle sometimes, and annoying little gnats with an affinity to ears and eyes. I know what you mean about her looks – they are arresting!