The rest of November's rides 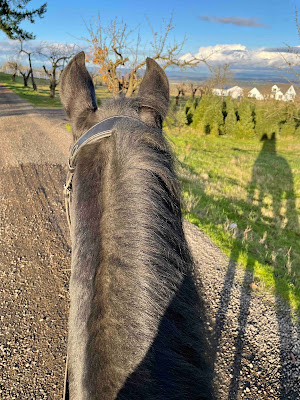 11/23: Showers on and off since last night left the arena a maze of puddles. Since I turned the horses out for a romp at dusk last night after working in town, I decided to tack up Stella and ride without turning her out first, and mostly ride outside the arena. We did our usual warm-up walk on the buckle in the sandbox, and then headed up the driveway. Deciding it was too slippery to turn left and go through the southern neighbor's lot, we turned right and headed up the gravel lane. Stella was hot to go and tense, so I leg-yielded her back and forth up the incline on our single-track lane to encourage walking instead of jigging. When we got to the top of the hill, our northern neighbor was pulling out in her car and another car was coming our way, so I hopped off and held Stella, then got back on.
From our end of the gravel lane to the other and back is little more than a mile, but Stella says that being on high alert and leg-yielding or doing shoulder-in at the same time takes a LOT of effort, even if we walked the whole way. 😆 Plus, the incline peaks between the two dead-ends, so there is some uphill and downhill action going and coming. By the time we turned around and headed back up the peak, Stella's head came down and her pace leveled out. After crossing the intersecting paved road, we were passed by two vehicles (winery traffic) with no precautionary dismounts or reaction on Stella's part. This is exactly what I hoped to be able to do during the rainy season, both to preserve our arena footing and to provide variety in conditioning and training; yay us!
11/24: Today we schooled in the arena. I worked on keeping her pace controlled, using my core at the walk and my posting speed (which is also using my core) at the trot. Doing shoulder-in at the walk on both reins also helps keep her pace controlled, while I analyze my legs and seat to see if I'm using them the same in both directions (I don't, naturally; it takes a lot of focus!). 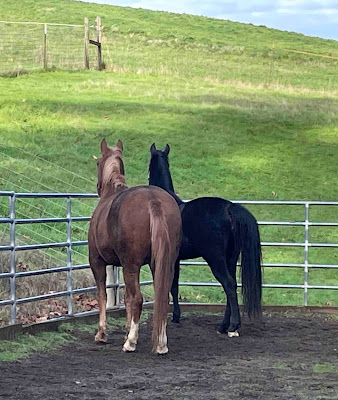 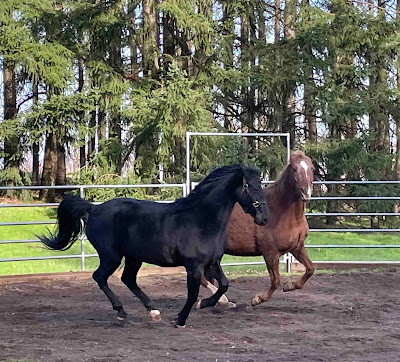 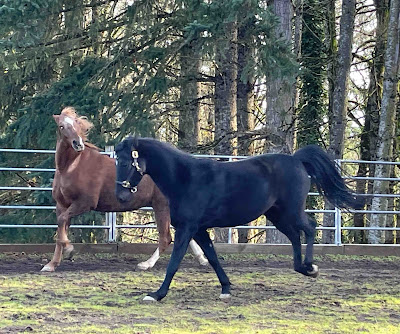 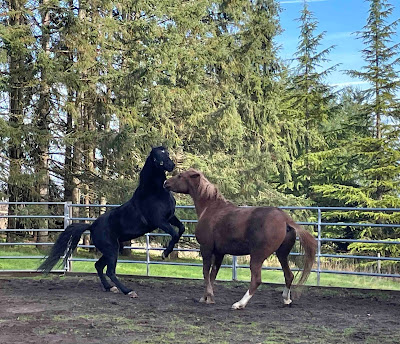 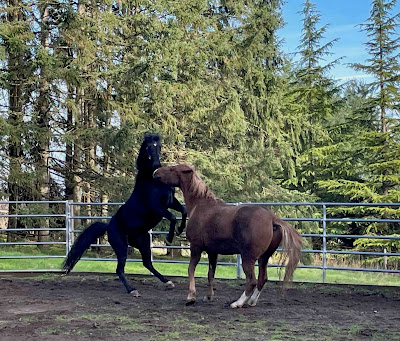 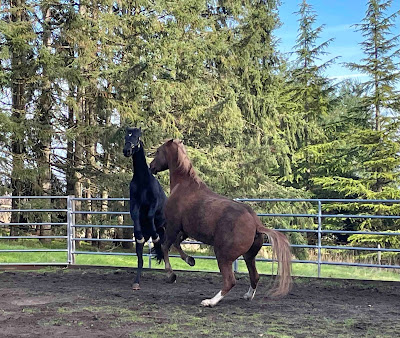 11/25: After baking off my dinner rolls for Thanksgiving dinner, I had just enough time to turn the horses to play and get in a very short ride before we had to clean up and leave. Rick came down to the arena to see what I was doing, and all Stella wanted to do was hang out at the gate with him and get stroked! Found the treasure below in the arena; anyone know what bird lost this? 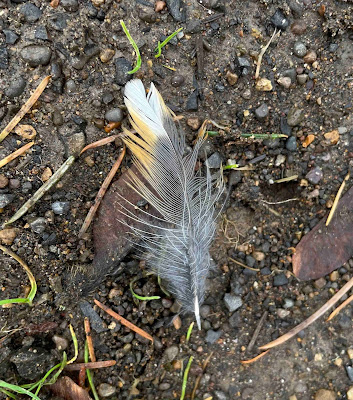 11/28: In spite of Stella having two days off and being pretty tense, I decided we were going to 'go out,' this time turning left and going through the neighbor's lot and down the gravel lane. She had to stop to look and listen several times to make sure it was safe, but was then willing to keep going. It was dusk when we returned, with some reflected color in the SSE. 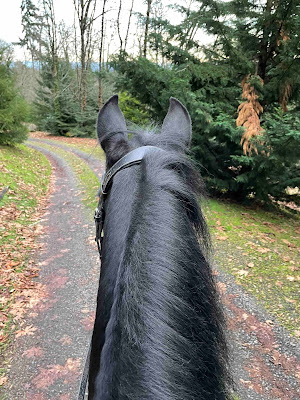 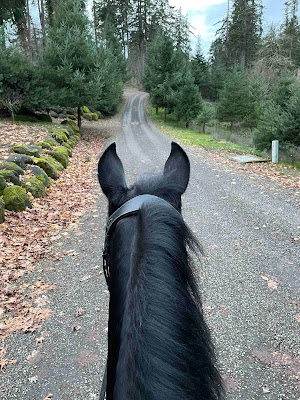 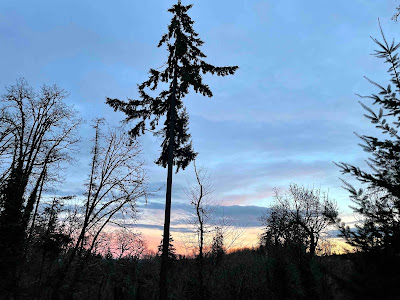 11/30: Last ride of the month; we schooled in the arena after the horses got turn-out time. Again I worked on slowing Stella's walk and trot with my core and not my hands as Suzan had us do in our last lesson, while also working hard to use my legs and hips the same whether tracking left or right. After making good progress (both of us), I asked for canter while continuing to concentrate on keeping my 'slow and steady' aids the same. It worked! Her canter was much more controlled than usual, even though she clearly wanted to rush at times. It feels so good to be figuring out what works with this girl, and being able to feel and correct where I tend to struggle as well! 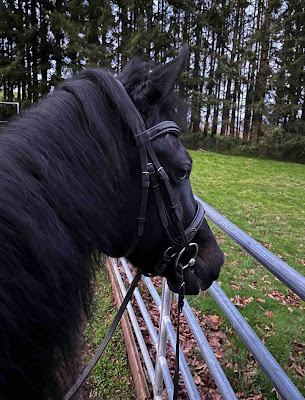 Afterwards we walked up the driveway to see the fancy new Christmas lights my husband put on the entry gate. She noticed them, but wasn't freaked out, and didn't move when I activated the power arm to shut the gate. 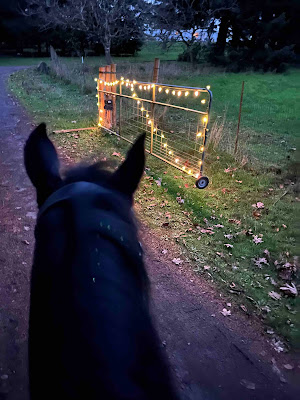 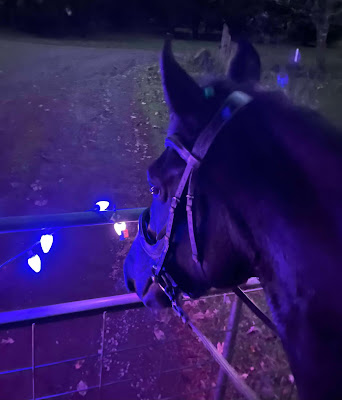 We have made a lot of progress together in two years!
Posted by Michelle at 6:40 PM

Just imagine how she will be in he future! I think about that with our two youngsters.

I think Stella will always be a 'hot little number,' Marlane, but appreciate that she is still sensible and trusts me. She LOVES to go "out and about," so I'm hoping to haul her around to do more of that. I want to go on a beach ride!

I always enjoy getting a horse update :-)

Just love seeing them together! Friends!! I remember when you first got Stella - Lance was not impressed. Hahaha!

I'm getting better about doing them, A, because I want better documentation of Stella's progress. And that prompts me to take more photos so there's at least a LITTLE interest for others!

Elaine, now Stella is Lance's 'herd, and he YELLS for her the entire time she's out of sight now!