What I did on my summer vacation

In my last post (Eeep – JUNE 25 😳), I mentioned looking forward to starting up lessons with Suzan again and making up for some of my lost training time this year. Well, between weather, scheduling conflicts, and a facility in quarantine lock-down, that didn't happen for months. By September I was so desperate for some instruction that when I got an invitation for an online training challenge with Amelia Newcomb in my inbox, I figured it would be better than nothing and signed up. Wouldn't you know it; the very next day Suzan texted me with a lesson slot! Thus began an intensive five weeks of training, both virtual and in-person . . . but wait; I'm getting ahead of myself.
I have taken plenty of "proof of life and riding" photos since my last post, but haven't posted them because other than "proof," there wasn't much to report. So here they are from early July on:

In August, I saw an appeal from the Morgan Horse Association of Oregon asking for participants in the Battle Between Breeds class at the State Fair. Even though I said "forget about showing" in my last post, this wasn't really showing; this was just being a breed representative dressed up for dressage doing walk/trot with a group of Morgans. I offered to take part, asked some questions to know how to prepare, and looked forward to a September 1st outing to further Stella's exposure to the world beyond our hill. Little did I know just how much exposure we'd get!
On the day of the class, I hauled my horse and gear to the state fairgrounds, got Stella settled in a stall provided by the MHAO, unloaded our gear, walked Stella around the grounds for a look-see (SO much to see!), saddled her up and rode in the warm-up arena, and gave her a bath (a shout-out out to my DH for lending a hand!). After a short break (it was H.O.T.), I braided Stella's mane, tacked her up, donned my show clothes, and headed back to the now-buzzing warm-up arena. Then the announcer invited – no, requested –the Battle Between Breeds participants to ALL come in and warm up in the show arena so the audience could enjoy the horses before the class. The State Fair Horse Show arena is a notoriously scary place, with a tall, solid wall and the audience perched high above, so I welcomed the chance for Stella to see it before the class. But *wow* were there a lot of horses warming up; I counted five different breed groups – Morgans, Saddlebreds, Mules, Drums, and Gypsy Vanners. I sure hoped my tense, apprehensive horse would be able to relax a bit when we went back in to show with just Team Morgan. Um, except when it was time for the class to start (after we all exited the show arena), the announcer ushered everyone, all SIX breed teams (a final team of Clydesdales rode up just in time to start the class), back into the ring to show as one giant class! What a trial by fire;  I never would have agreed to participate if I'd known what we were in for. But I couldn't back out at that point, so I did my best to keep my mare between me and the ground, and not blow it for the team. And we succeeded! Team Morgan won blues for both the rail portion and the halter portion!!! 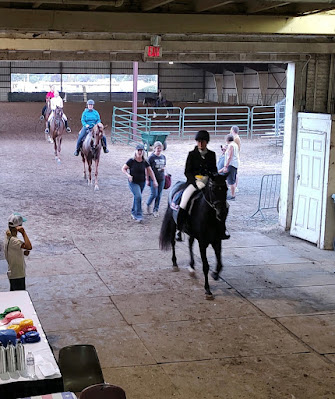 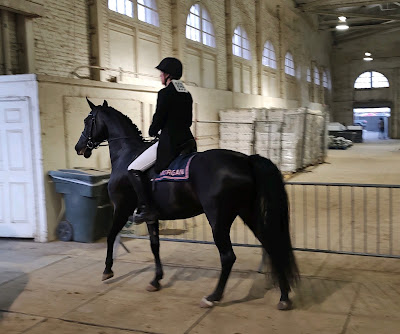 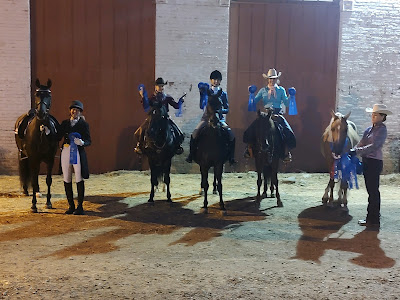 I'm still waiting for the official state fair horse show photographer to post his photos; I'll share if any are good enough to do so.
A long-time horse friend who came and watched commented on Stella's often-open mouth, suggesting a flash noseband might help. Stella has always had a busy mouth; I decided to add the flash. Here she is processing the addition:

Next up: From zero to sixty!
Posted by Michelle at 4:35 PM

It's so good to see you blogging again! She looks great, what an experience at the fair!

You and your black swan have come such a long way! You might feel like you're not getting the training in, but something is happening for her to be able to go to the fair and behave like that!

Thanks for the affirmation, Jen. It's nice to have something to post ABOUT again. The next post will be about actual PROGRESS; yay!

Yes and no, Terry, on coming a long way. We definitely have more of a relationship, which is huge and got us through that state fair class. But by myself I wasn't finding the way forward to getting her relaxed and through; she is SO tense, quick, and reactive (she was tight as a drum that whole class). The online challenge helped some, but lessons with Suzan are the key and we are now doing that regularly; YIPPEE!

WOW!! You both looked grand - especially Stella. Seriously, I know those were still pictures, but she really did look like a champ to me! I can’t help but remember your first days together and how skittish she was - high strung. She probably still is a bit but she (and you) are learning to control that reaction. She has come such a long way! And you should take a bow for making that happen!!

Love the photo of them conked out in the field! :-D And WOW!! You guys did GREAT at the Fair. Congratulations!! I'm excited for you that you've got some lessons and training lined up - when it rains, it pours :-)

We were there that day and even chatted with the Morgan people at the table. I wondered if you were there, but my almost three year old was done with horses and ready for the next thing. I’m so glad Stella did so well for you.